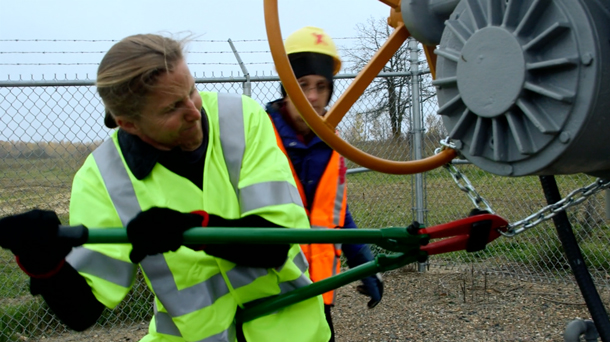 Emily Johnston uses heavy-duty clippers to break a chain on a shut-off valve for an Enbridge pipeline in Minnesota as Annette Klapstein looks on. The two women together shut down Enbridge Lines 4 and 67 on October 11, 2016. (Photo: The Valve Turners film, courtesy of Steve Liptay)

On October 11, 2016, climate activists closed valves on five pipelines, halting most of the oil flowing into the US from Canada’s oil sands. They waited for arrest, went quietly, and faced criminal charges in court. Writer Michelle Nijhuis profiled these “Valve Turners” for The New York Times Magazine and explains to host Steve Curwood why these five activists feel such urgency to risk legal jeopardy in order to stop what they see as the catastrophic damage humans are causing to the climate.

CURWOOD: Many environmental activists join rallies or marches, sign petitions and lobby legislators. But some feel the need for more drastic steps. On the morning of October 11, 2016, five activists halted the flow of crude oil through five different pipelines along the U.S.-Canada border, from Washington State to Minnesota. They’re known as “The Valve Turners”, and they argue their illegal acts constitute necessary civil disobedience, in the face of climate change driven by the burning of fossil fuels. In a recent New York Times Magazine article, writer Michelle Nijhuis tells the story of how the Valve Turners came to turn, turn, turn. Michelle, welcome to Living on Earth!

NIJHUIS: Thanks for having me, Steve.

CURWOOD: What prompted you to write this story?

CURWOOD: In other words, it's uncommon to find people who are willing to go to jail for their beliefs.

NIJHUIS: Especially for problems that most of us see as abstract or distant.

CURWOOD: Now what exactly did the Valve Turners do on that day, October 11, 2016?

NIJHUIS: Well, on the morning of October 11th, the Valve Turners shut down four cross-border pipelines in Washington, Montana, and Minnesota. They cut the locks on the fences that were around the valves. They turned these emergency valves so that the pipelines were turned off. And, together, those pipelines carried nearly seventy percent of the crude oil imported to the United States from Canada. So for several hours, a large part of the oil we get from Canada was not flowing into the country. 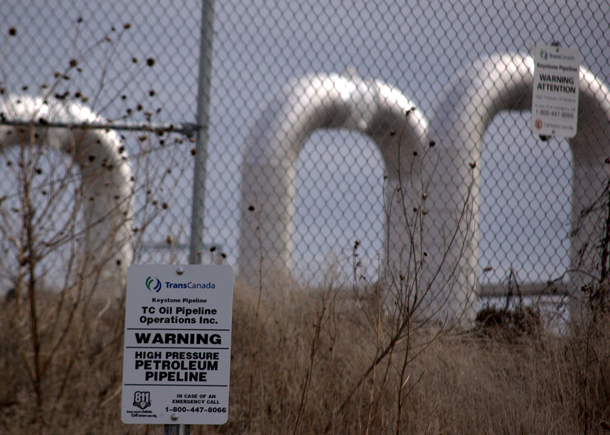 The Keystone Pipeline, which Michael Foster temporarily shut down, transports diluted bitumen and crude oil synthesized from tar sands from Alberta into the United States. (Photo: shannonpatrick17, Flickr CC BY 2.0)

CURWOOD: So, what were they trying to accomplish? I mean, just for a few hours obviously they shut down those pipelines. That didn't exactly stop that importation of oil from Canada.

NIJHUIS: Right, and it was to a large extent a symbolic action and I think they would all say that. Michael Foster, who was the main character in my story, said that he really got some visceral satisfaction from stopping what he would call poison from being emitted into the atmosphere. He would say, you know, look I have done so much work against climate change but have I really stopped any carbon emissions? No, this is the first time I've done that. But strategically I think what they were up to is they wanted to wake up people who were sympathetic, but complacent. And then they also wanted to point a finger at the fossil fuel companies, who are really the largest emitters of greenhouse gases on the planet.

CURWOOD: So, how would you characterize the Valve Turners?

NIJHUIS: They’re unlike the typical radical activist in that they're a bit older. The youngest member of the group is fifty. Most of them are churchgoers. As I say in the story, most of them wear sensible shoes. They're all white. Several of them are grandparents. None of them is truly poor, some of them are voluntarily poor, but they're all fairly comfortable economically. And none of them are facing an immediate threat from climate change. You know, their house is not flooding, their crops are not being flooded either, and they all say that they feel like those advantages give them a kind of responsibility to take the kind of actions that they've taken. And I would describe them as really humble people. Not necessarily shy, but not doing this because they enjoy performance, or they enjoy setting themselves apart from the rest of humanity. Even the jurors I talked to who were very, very critical of what the Valve Turners had done, recognized that their convictions were genuine and that they were truly motivated by their convictions. 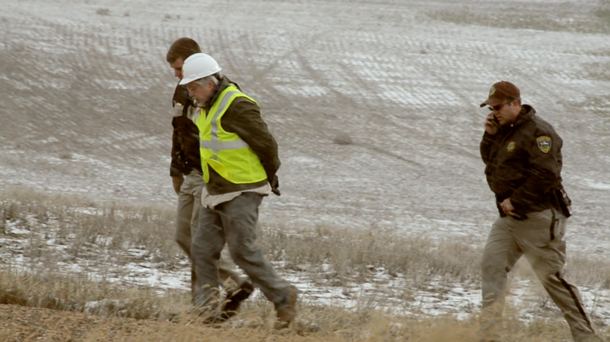 Two officers escorted Leonard Higgins to a patrol car after he closed a shut-off valve on the Enbridge Express Pipeline in Montana. (Photo: The Valve Turners film, courtesy of Steve Liptay)

CURWOOD: I imagine it was more than one graduate degree among them.

NIJHUIS: Yes, they're all college educated, and a couple of them have studied divinity.

CURWOOD: Let's talk first about Michael Foster. That's the man you focus on in your article. Who is he and what motivated him to shut this part of the Keystone Pipeline?

NIJHUIS: Well, Michael Foster is a fascinating person. He was born in Houston, Texas. He was raised by his grandparents. His grandfather worked for the Shell Oil refinery. And Michael grew up supporting the development of fossil fuels, as most people in Texas did at the time. And as he grew older, he became an environmentalist, and he grew aware of the problem of climate change. And as he describes it, he kept hearing about it and kept thinking someone would fix it and no one fixed it. He became trained as a climate change communicator by Al Gore. He gave lots of presentations to school groups. He did lots of what you would call “conventional activism”, and he just became more and more frustrated that no one was treating climate change as the emergency he felt it was. His kids are a huge motivation for what he's done, and as he saw it, his opportunities for doing something to benefit them, to stabilize the climate for them, were running out.

CURWOOD: Michelle, briefly, who are the other four Valve Turner activists?

NIJHUIS: The other four are Ken Ward, who gained some notoriety in environmental circles a few years ago for a similar action he carried out on the East Coast. He put a lobster boat in the way of a coal freighter on the coast of Massachusetts. There's Emily Johnston, who is a poet and writer who lives in Seattle and a long time environmental activist. Annette Klapstein, who was an attorney for the Puyallup tribe in Washington for many years, and is now more or less a full time activist. And then Leonard Higgins, who is a retired state employee in Oregon, and a very dedicated Unitarian. A lot of his activism comes from his faith. 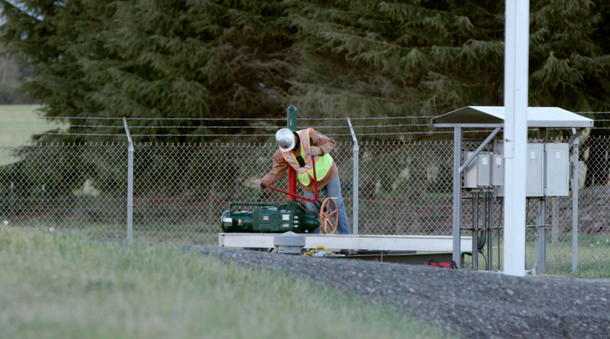 CURWOOD: To what extent did the authorities view this as a widespread conspiracy, and move forward with some pretty tough laws that are aimed at terrorists?

NIJHUIS: Yeah Michael and his codefendant were charged with conspiracy, which was a surprise because his codefendant was merely filming the events. And so, North Dakota took a hard line, as hard a line as possible, against these activists. That was not the case in Washington State. So, it varies state by state. The outcomes, of course, vary judge-by-judge, and jury-by-jury. And the range of opinions that I found in interviewing jury members was really wide ranging.

CURWOOD: In your mind, what separates the Valve Turners from radical activist groups like Earth First and the Earth Liberation Front?

NIJHUIS: Well, back in the 80s and 90s, and even the early 2000s, groups like Earth First and the Earth Liberation Front were sabotaging science labs. They burned a ski lodge in Colorado. And they did that all anonymously. They would carry out an action in the middle of the night, and run away. And, that allowed opponents of the environmental movement to say, “all these environmentalists are terrorists. We really have to be concerned about this movement. It's out to hurt people, to cause damage.” And so I think the Valve Turners would distinguish themselves from those groups in several ways. They would say, “well, we're committed to nonviolence.” They knew they were going to cause minor property damage, but they did not want to cause major property damage. And perhaps just as importantly, we're going to commit these actions, and then we're going to wait to be arrested, and we're going to show up in court, and we're going to explain why we did that. They see that explanation of their motivations just as important as what they did with bolt cutters at the Keystone Pipeline. 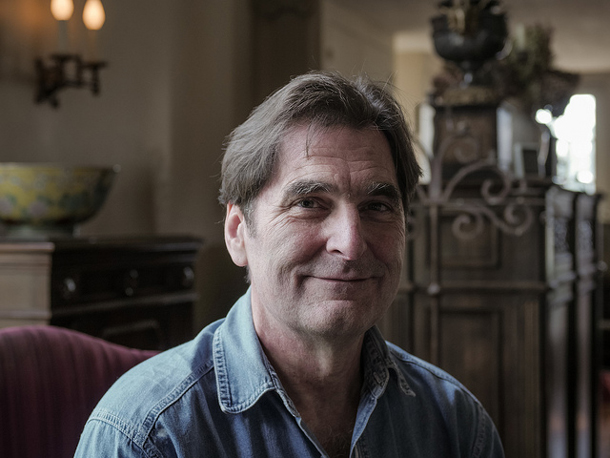 The October 11th, 2016 action was not the first time Ken Ward, above, faced criminal charges for his climate activism. In May 2013, aboard a lobster boat christened the Henry David T., Ward, he and fellow activist Jay O’Hara blocked a coal ship from entering a Massachusetts port. (Photo: Public Herald, Flickr CC BY-NC-ND 2.0)

CURWOOD: Now, when Ken Ward came to trial in Massachusetts, and famously the local district attorney said, “You know what? We shouldn't prosecute this person.” So, actually, there never was a full trial. But, in the discussions, was the concept of the necessity defense -- that is, sometimes people have to break the official law in order to obey a more important situation, or a higher law. To what extent did the Valve Turners use this as a defense in their trial?

NIJHUIS: Well, the necessity defense was a large part, and still is a large part of their strategy. And the necessity of defense has been invoked by activists before them, by anti-nuke activists, by anti-abortion activists. All of whom argue that, “look, under the necessity defense, we are allowed to commit crimes to avert a clear and present danger, if we have no legal alternative.” And that's generally understood to mean, you know, you're allowed to break into a house if it's burning down and you want to save the people inside. And they’re saying the necessity defense should be expanded to include these global threats. And we have, they would say, look we've tried every legal strategy we can think of, and they haven't worked, and we see this as an emergency, and time is running out, so we had to act. That defense has been rejected in three of the trials, three of the Valve Turners trials, and it is still being considered in the fourth. So, it's rarely admitted by judges, but activists feel that continuing to present the necessity defense is something that allows them to tell their story in a public forum. 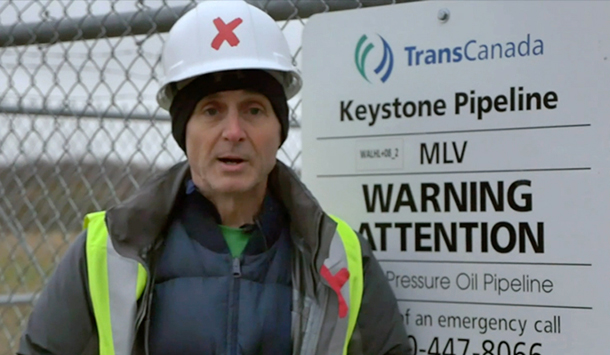 Michael Foster received the most prison time of the Valve Turners: a North Dakota judge sentenced him to three years in prison (with two of those years to be suspended and served on supervised probation). Mr. Foster could have faced up to 21 years in prison. (Photo: The Valve Turners film, courtesy of Steve Liptay)

CURWOOD: Michelle Nijhuis is a writer for The New York Times Magazine. Thanks for taking the time with us today, Michelle!


The New York Times Magazine: “‘I’m Just More Afraid of Climate Change Than I Am of Prison’”