The Amazon as Legal Person 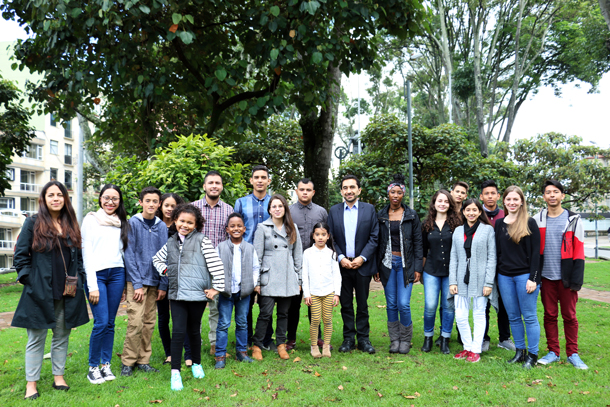 The 25 youth plaintiffs hail from 17 different cities in Colombia, including 4 from the Amazon. (Photo: Courtesy of Dejusticia)

Colombia’s Supreme Court ruled that 25 young plaintiffs have a right to a safe and healthy environment in the years ahead. To that end the high court ordered the government to halt deforestation of the Colombian part of the Amazon, and granted the river and tropical forest the legal standing of a person, so ‘guardians’ can sue on its behalf for protection. Host Steve Curwood discussed the significance of this historic ruling with University of British Columbia law professor, David Boyd, author of the book “The Rights of Nature.”

CURWOOD: From PRI, and the Jennifer and Ted Stanley Studios at the University of Massachusetts, Boston, this is Living on Earth. I’m Steve Curwood. In an historic case in Columbia, 25 young plaintiffs sued the government for their right to a safe environment and recently won protection for the Amazon at the Supreme Court. Lead plaintiff Valentina Rozo –

ROZO: I feel incredible. We are in total 25 of us. We are between the ages of 7 and 26 and we come from 17 different cities in Colombia. Four of them live in the Amazon and that's also great because, well they are the most directly affected. So it's important because we can show that we as young people, and especially for someone that is seven years old, he doesn't have to be a president or a minister to make a change and to be listened [to]. So, you don't have to have power to create something big.

CURWOOD: The case is part of a growing global movement where young people are challenging governments to combat climate change and protect future generations.
The Supreme Court granted the Colombian portion of the Amazon tropical forest the status of “personhood”, so the forest has rights under the law. Lawyer David Boyd joins us – he teaches at the University of British Columbia, and is author of The Rights of Nature. Welcome back to Living on Earth David!

BOYD: Well, it is absolutely delightful to be back with you, Steve.

CURWOOD: Talk to me about this ruling by the Colombian Supreme Court of Justice. What exactly does it say, and what does it entail, in brief?

BOYD: Well, this is an extraordinary ruling by Colombia's Supreme Court, in a case that was brought on behalf of twenty-five Colombian children, by a human rights organization called Dejusticia. And basically what these children argued in court is that their fundamental right to live in a healthy environment, one of the most sacred human rights that there is, is being violated by deforestation in the Colombian Amazon rainforest, which not only is impacting water in Colombia, but also has significant effects on climate change because deforestation releases carbon to the atmosphere and exacerbates the global climate crisis.

CURWOOD: So what does this tell us in terms of global trends, and what kind of legal precedent is this court setting?

BOYD: Well, this is actually part of a line of cases that dates back twenty-five years to an extraordinary case in the Philippines that was brought by a Filipino lawyer named Tony Oposa on behalf of his children and a group of other Filipino children, in which Tony Oposa argued that deforestation in the Philippines was violating those children's right to live in a healthy environment under the Filipino Constitution. And in 1993, the Supreme Court of the Philippines agreed with Tony Oposa that that was indeed the case, and that really is kind of the grandmother of all of these cases being brought today on behalf of children in countries all over the world. So this Colombian case is the latest, but it's also the first in the world where a court has really tackled this issue of deforestation, and made the connection between deforestation and climate change. 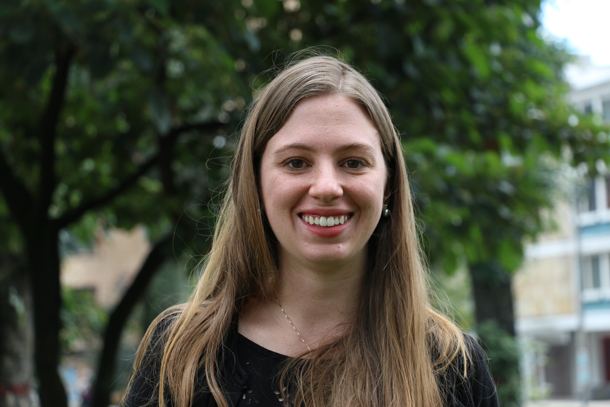 Valentina Rozo is a researcher with Dejusticia and one of the plaintiffs in the case. (Photo: Courtesy of Dejusticia)

CURWOOD: Now, what's the main argument of these young plaintiffs?

BOYD: The main argument is really quite simple - it's that they have rights under the Colombian Constitution - the right to life and the right to a healthy environment, and the impacts of deforestation are clearly, scientifically proven to be adversely affecting those rights.

CURWOOD: David, now what about this aspect of the decision that grants nature personhood. The court is saying, not only should you protect these trees, but in fact, these trees have the right to exist.

BOYD: Yeah, well, this is another fascinating part of the court's decision. The court really goes into great detail talking about how it's absolutely vital for the government not only to stop deforestation, but for society more broadly to re-evaluate and reorient our relationship with the natural world. For too long we've seen nature as merely a basket of commodities or natural resources for human beings’ use and exploitation. And what the court says is nature is actually a community to which we belong and not a commodity for us to exploit. And, in recognizing that the Amazon rainforest has the legal rights of a person, what that does is that shifts our relationship with nature in a profound way and says, we have really sacred legal obligations to protect and restore the Amazon rainforest, and those responsibilities fall upon the shoulders of the President of Colombia, the Ministry of Environment, the Ministry of Agriculture, and the people of Colombia.

CURWOOD: Under the law in America, corporations are treated as persons in the court system. What's the effect on these natural systems of giving them personhood?

BOYD: Well, the effect on natural systems is that - two things. One is that they have rights that are recognized in our legal system, so their situation has been transformed from objects to subjects, and as subjects they have rights that can be enforced in the legal system. So we've seen, for example, in Ecuador, a case in which the constitutional rights of a river led a court to order the government to carry out an ecological restoration project on the Vilcabamba River. In the context of the Amazon, the fact that the Amazon is now designated as a legal person means that it has legally enforceable rights, and if the government fails to develop an action plan for deforestation -- to achieve zero deforestation – then, lawyers on behalf of children or the Amazon itself can go back to court in Colombia and enforce those legal rights. So it really is quite a game changer from a legal perspective. 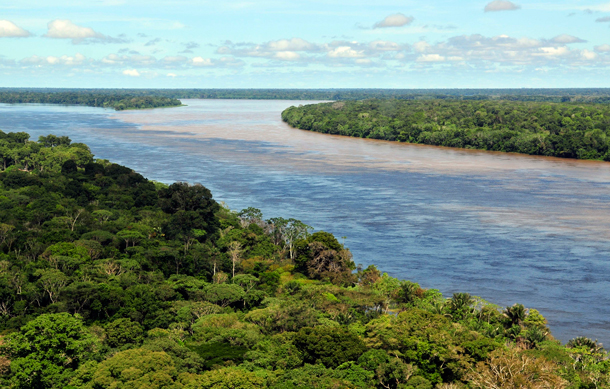 In Colombia, the Amazon rainforest can now enjoy rights of personhood under the law as a result of a Colombian Supreme Court ruling. (Photo: Neil Palmer/ CIAT, Wikimedia Commons CC BY-SA 2.0)

CURWOOD: Of course, going way back it's always been Mother Nature.

BOYD: Yeah, I mean. And the science of this is really remarkable. I mean, we are literally -- we share DNA with every other form of life on the planet -- from bacteria, to old growth forests, to elephants. We all are related. We all emerged from the primordial soup billions of years ago. We've of course evolved in different ways, but we are, scientifically speaking, part of the family of life on this planet. And for far too long we’ve behaved quite selfishly and really, recognizing the rights of nature is just a way of returning to a perspective that says this is our family and we're going to treat our family with respect.

CURWOOD: Now, why is this ruling so important at this moment?

BOYD: Well, this legal ruling really brings together two fascinating global trends. One is that we're seeing a real upsweep in children filing lawsuits, in lawyers representing children in court. So we've seen -- I mentioned a case in the Philippines, but there have been cases in the Ukraine, in Uganda, in Norway. There's a case pending in Portugal. There's the Juliana vs. the United States case, which is proceeding through the American courts. 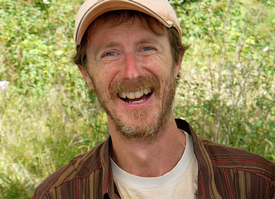 David Boyd is an environmental lawyer and professor at the University of British Columbia. His latest book is The Rights of Nature: A Legal Revolution That Could Save the World. (Photo: Courtesy of David Boyd)

So that's one avenue -- or one trend -- that's really increasing globally. And the other trend that it's linked to is the recognition that nature has rights. And so when you put together these two different avenues of progress, recognition of the rights of nature and recognition that children have a right to live in a healthy climate, what you have is a really explosive mix of transformative potential. So these two different global trends, in tandem, have the potential to really transform our world in a positive way from an ecological perspective.

CURWOOD: So, the High Court in Colombia has said that nature has rights, particularly the Amazon and its trees. What did it order the government to do as a result of this ruling?

BOYD: Well, it ordered the President, the Minister of Environment, and the Minister of Agriculture to sit down and hammer out an action plan within a period of four months that will result in zero deforestation by 2020. So, in other words, the Supreme Court of Colombia has put the government of Colombia on a very tight leash. That's the first part of their court order. The second part of the court order is even broader and requires the government to work with indigenous peoples, local communities, and scientists to come up with what the court calls “an intergenerational pact for the future life of the Amazon”. So, this is a really broad and sweeping plan that will be intended to protect this majestic ecosystem for all time. And the other really fascinating part of the court's judgment is that they gave the government 48 hours to get started. So, there's no room for delay here. The court has really remarkably expressed the urgency of its order by saying you've got to hit the road, Jack, and get going on this within the next two days.

CURWOOD: David Boyd is a professor of law policy and sustainability at the University of British Columbia. Thank you so much for taking the time with us today!

BOYD: Well, thanks for having me on Steve. It's a real pleasure.

Learn more about Rights of Nature

Living on Earth’s earlier interview about Prof. Boyd's book The Rights of Nature

Watch: YouTube video that explains the basis for the youth lawsuit (with English subtitles)