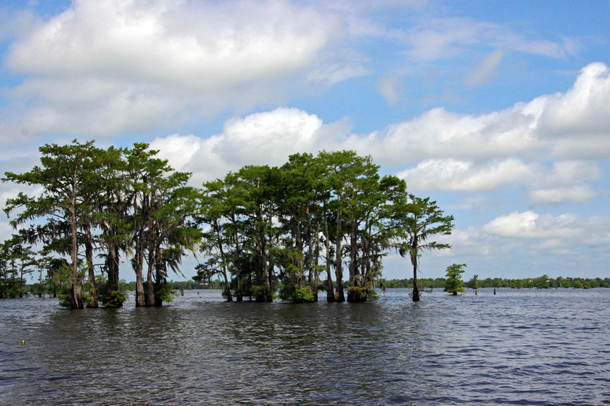 The region of Louisiana where the pipeline is routed to pass through features Cypress-Tupelo swamps, lakes, bayous, and migratory birds. (Photo: scott1346, Flickr CC BY 2.0)

A Federal Judge has temporarily halted the Bayou Bridge Pipeline, which would cut across Louisiana’s Atchafalaya Basin on environmental grounds. Energy Transfer Partners wants the pipeline as the end of the Dakota Access pipeline, to bring North Dakota crude to Gulf coast refineries and export terminals. Anne Rolfes, founding director of the Louisiana Bucket Brigade, tells Living on Earth’s Jaime Kaiser that the pipeline could devastate the nation’s largest swamp and compromise Louisiana’s iconic crawfish harvest.

DOERING: From PRI, and the Jennifer and Ted Stanley Studios at the University of Massachusetts, Boston, this is Living on Earth. I’m Jenni Doering.

KAISER: And I’m Jaime Kaiser, we’re in for Steve Curwood.

KAISER: The Atchafalaya Basin in Louisiana, the largest river swamp in the United States, is a mosaic of marsh and water, where ancient cypress and tupelo trees provide critical habitat for wildlife and migrating birds. But it also lies along the route that would bring oil drilled in North Dakota to export terminals on the Gulf of Mexico.

DOERING: Since the Trump Administration gave the green light to the controversial Dakota Access Pipeline, Energy Transfer Partners has been working hard to get the Bayou Bridge pipeline across the Atchafalaya built. But a federal judge in Louisiana recently ordered a temporary stop to the pipeline construction, following a court challenge by several environmental groups.

KAISER: Here to tell us more is Anne Rolfes, the founding director of the Louisiana Bucket Brigade. Welcome to Living on Earth, Anne!

ROLFES: Thank you so much. Thanks for having me.

KAISER: So, Anne, what did the judge say in this case?

ROLFES: Well, the judge agreed that there is a risk to the Atchafalaya Basin that is serious enough to warrant Energy Transfer Partners halting construction of this pipeline. She agreed with the plaintiffs that this pipeline could do irreparable harm.

KAISER: So, I mean I do understand that the Army Corps of Engineers gave the Bayou Bridge pipeline its seal of approval some months ago. Now, the judge has ordered this temporary stop because of environmental concerns. So, from your perspective why was that initial Army Corps assessment insufficient? 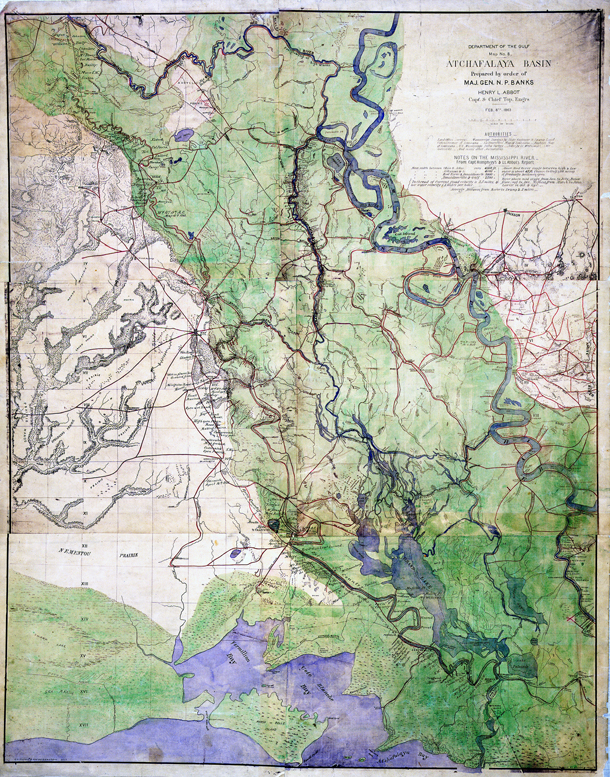 ROLFES: What should have happened from the beginning is that the Army Corps of Engineers should have conducted an Environmental Impact Statement, to really assess what the impacts are along the route. You have drinking water threatened in one area, you have black bear habitat threatened in the basin. You have a community, a historic African-American community, threatened in the community of St. James Louisiana. And the Army Corps of Engineers by refusing to conduct an Environmental Impact Statement didn't acknowledge that.

KAISER: So, I understand that as well as some environmental groups, local fishermen are concerned about the construction of the pipeline. Tell me more about that.

ROLFES: It's a really wonderful assortment of opposition. You have people in the western part of the state, in Calcasieu Parish, who are concerned about the impacts on their land. I mean, these are ordinary people who happen to own land along the pipeline route, and Energy Partners has seized that land and the people have no power to stop them. You continue down the route and you have indigenous communities that are concerned about the impacts to drinking water, and then if you continue you hit the Atchafalaya Basin where the crawfishermen make their living from the basin. There are wild crawfish there still, and the problem with a pipeline like the Bayou Bridge pipeline is that it acts as a dam and restricts water flow.

The water dies, essentially, and then all of the living creatures within that water also die, and so in our case the pipeline restricts water flow, and the crawfish die. And if you're not from Louisiana you might not understand how significant crawfish are to us, but culturally they are a lynchpin for us and at this time of year, the spring is the time of year where we eat crawfish. There are crawfish boils everywhere, you’ll go to a neighbor's, and there will be 20 pounds piled high on a table with boiled corn and potatoes, and it is something that you will spend hours doing, just eating crawfish and drinking beer, and the thought that a pipeline company can come and kill that culture is a tragedy.

KAISER: I am one of those people who has never been to the Atchafalaya Basin. I imagine a lot of our listeners have never been there. So, could you give us a description of the place?

ROLFES: Yeah, one of the crawfishermen has described the basin as his Yellowstone, and if you think about the magnitude of the national parks that people might be more familiar with, Yellowstone or Glacier or the Smokies to the east, it's that magnitude of natural significance. And so what you see is, you see placid water, flat water, brown, maybe dark green water and you see these beautiful cypress trees and moss hanging down from them, you'll see alligators swimming around. You'll see all kinds of varieties of birds - when the swamp is healthy of course –

ROLFES: And the sounds, of course, are pretty astonishing also, a lot of bird sounds; you'll hear the sounds of things dropping in the water, you'll hear certain insect sounds at different types of day. Once night falls you'll start to see frog eyes if you shine a light. So, it's teeming with life.

KAISER: So, the pipeline would run through 162 miles of the state, part of it would be sitting right in the water. How would a pipeline oil leak affect the swamp?

ROLFES: What we see the impacts of oil spills to be, and we know because we see them all the time, is that they kill the wildlife and they kill the natural world. So, for example, we're having these water protector trainings, and I was speaking with a crawfisherman at one of those trainings and he said he can already see from past oil skills that our red fish population has gone down in areas and that our crabs have also died off. And so this has been a long assault on the state of Louisiana by the oil industry.

KAISER: So, the pipeline is being sold as providing jobs and energy independence to the state. Do you think that's the case?

ROLFES: We were out along the pipeline route just yesterday, and there was a group of workers, and I said, "Could any of y’all who are from Louisiana please raise your hand?" and not a single one of those men – and there were are about 20 of them - raised their hand. So, the fact that our governor and our elected officials are peddling this pipeline is laughable because they're not even hiring people from our state. And then energy independence, I mean, that's hot air also because certainly some of this oil will be for export. 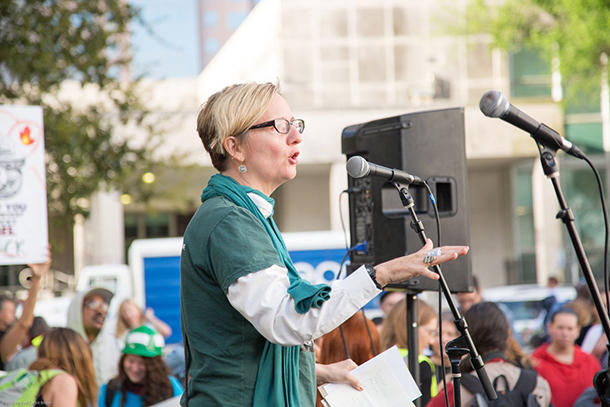 Anne Rolfes is the Founding Director of the Louisiana Bucket Brigade. (Photo: courtesy of Anne Rolfes)

KAISER: So, what happens next in this case? The judge essentially issued a pause on construction of the pipeline, but then what?

ROLFES: Yeah, let me just say this because I don't want people to get...before I answer that, I don't want people to get depressed about this fight because it is a great moment in Louisiana. Just yesterday we were out on the pipeline route, we stood in front of backhoes, we stopped their construction. We prevented that backhoe from grabbing a pipe that they were trying to grab and from laying in the ground. So, there is a lively resistance here where you have people who are willing to take action, 50 of us as happened yesterday stood in the way of a backhoe. That hasn't happened here before, and the oil industry ought to be scared, they ought to realize that it's a different day, and that they will have trouble on their hands. And the next steps are, of course, that Bayou Bridge has furiously filed motions to vacate the judge's ruling, and so it's just a matter of waiting, and you know waiting for decisions.

KAISER: Anne Rolfes is a Founding Director of the environmental group, the Louisiana Bucket Brigade. Ann, thank you so much for coming on the program today.

ROLFES: Oh, my pleasure, I'm glad to be here.

DOERING: We asked the pipeline company for comment; their statement is posted in full on our website loe dot org and reads:

Bayou Bridge Pipeline respectfully disagrees with the District Court’s ruling that the Army Corps of Engineers did not properly consider the limited impacts of construction in the Atchafalaya Basin during the extensive NEPA process the Corps conducted. In fact, the Corps issued two comprehensive environmental assessments, both of which had a “Finding of No Significant Impact” to the Basin. We intend to seek immediate relief from this decision in the appropriate courts. Beyond that, we will decline to comment on the legal process, but instead defer to our filings. It is important to clarify that construction of this important infrastructure project continues in all other areas along the route.

More on the Judge’s reasoning here