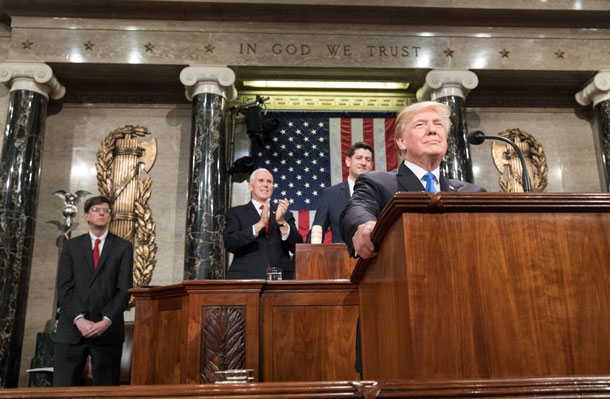 While delivering the 2018 State of the Union Address, President Trump claimed that his administration had “ended the war on American energy,” as well as the “war on clean coal." (Photo: Shealah Craighead, official White House photographer, Wikimedia Commons [Public Domain])

During his 2018 State of the Union Address to Congress, President Trump declared he has “ended the war on beautiful, clean coal”. Peter Dykstra joins Steve Curwood to talk about other topics mentioned in the speech – and those left out. For this week’s history lesson, the pair look into a still-missing disarmed atom bomb lost in a US Air Force accident near Savannah, Georgia.

CURWOOD: Time now for a look-see behind the headlines with Peter Dykstra. Peter is with Environmental Health News, that’s ehn.org and Daily Climate.org and joins us now on the line from Atlanta, Georgia. Hi there, Peter!

DYKSTRA: Well, as far as environment and science are concerned, I’ll be brief, because the President certainly was. In past years, we’ve talked about how Presidents of both parties insert a couple of obligatory lines about the environment in the annual speech. In 1993, Bill Clinton talked about cleaning up the troubled Superfund program. A quarter century and four presidents later, that still hasn’t happened. And though it now seems unbelievably quaint, both Richard Nixon and Ronald Reagan said that protecting the environment should never be a partisan or ideological issue. 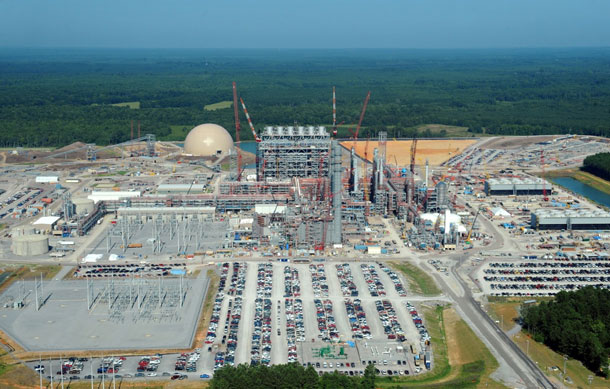 Shown here under construction, the Kemper Project was created by Mississippi Power to use carbon capture technology in order to be the United States’ first “clean coal” power plant. The project lost approximately $7 billion in construction costs before it was announced that the power plant would switch to burning natural gas. (Photo: XTUV0010, Wikimedia Commons CC BY-SA 3.0)

CURWOOD: Yeah, I think that was long ago and far away, Peter. But what about Mr. Trump talking about clean coal and some energy independence?

DYKSTRA: Okay, let’s start with beautiful clean coal. We’ve had two demonstration projects for burning coal with few or no emissions – one in Illinois, one in Mississippi – and both were billion dollar disasters. At this point, we’ve got better odds of getting clean energy from leprechauns on treadmills than we do from clean coal. Even the most zealous of the coal barons have advised Trump to pull back on his unrealistic promises to revive a dying industry. Natural gas is eating coal’s lunch in the marketplace, and wind and solar are well on the way to putting two more nails in the coffin for domestic coal for making electricity.

CURWOOD: And what about American energy independence?

DYKSTRA: Well, we’d have much more chance of American energy independence, if the Feds, some states and utilities stopped pulling back on the reins on the rapid growth and plummeting costs of wind and solar. Some of the most fossil-fuel-friendly states like Texas and Oklahoma are also cleaning up on wind power.

CURWOOD: Yet Virginia apparently is going to be the first coal producing state to join the Regional Greenhouse Gas Initiative. So since that was just about all the President said about energy and environment, what went unsaid? 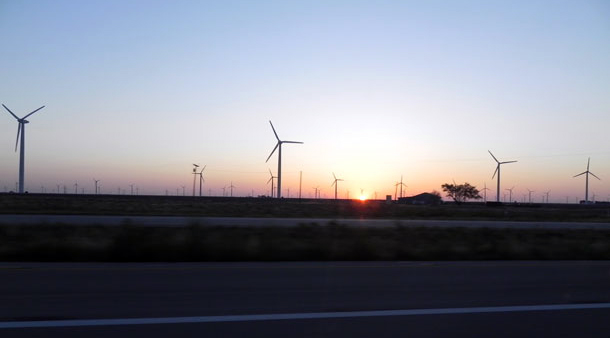 The Roscoe Wind Farm in Roscoe, Texas, is one of the world’s largest wind farms. The Electric Reliability Council of Texas announced that before the end of 2017, Texas’ installed wind capacity had surpassed its coal capacity. (Photo: Fredlyfish4, Wikimedia Commons CC BY-SA 3.0)

DYKSTRA: Well let’s see, here’s a couple of things. In his speech last week at the World Economic Forum in Davos, Switzerland, President Trump went on an extended boast about the American economy – record high stock market, record low unemployment, and more. And a big part of that boast was the assault on regulations – environmental and otherwise – that the White House sees as a drag on American productivity. He tossed out a single line about regs in the State of the Union, and the President avoided the traditional nods toward clean air and water, and other things that many of us consider to be nothing less than a birthright.

CURWOOD: So the cynics would say he wants to make America dirty again? Hey, do we have some time for a quick dip into history?

DYKSTRA: Always! A momentous sixtieth Anniversary for this part of the country. In early 1958, two military aircraft collided over eastern Georgia. The pilots safely ejected and parachuted, but the cargo of one of the planes included a nuclear weapon, which is believed to have ditched near the mouth of the Savannah River. 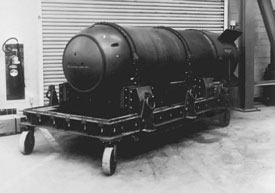 Shown above is a disarmed Mk-15 hydrogen bomb, the same kind that is believed to have fallen just off the coast of Tybee Island after the collision of two USAF aircraft. (Photo: Wikimedia Commons [Public Domain])

CURWOOD: So a bomb in the water near a busy port and some beach towns like Hilton Head and Tybee Island. Tell me they found the bomb?

DYKSTRA: Well it’s only been sixty years, but not yet. Some tabloid reports said that amateur divers stumbled on the bomb, but nothing substantial has been reported. It’s a mystery, just like beautiful clean coal.

CURWOOD: Nice one, Peter. Peter Dysktra is an editor with Dailyclimate.org and Environmental Health News, that’s ehn.org. Thanks a lot!

DYKSTRA: Ok Steve, thanks. We’ll talk to you soon.

CURWOOD: And there’s more on these stories at our website, loe.org

DAILY KOS: “The Tybee Bomb: When the USAF Dropped a Nuclear Weapon on Savannah GA”