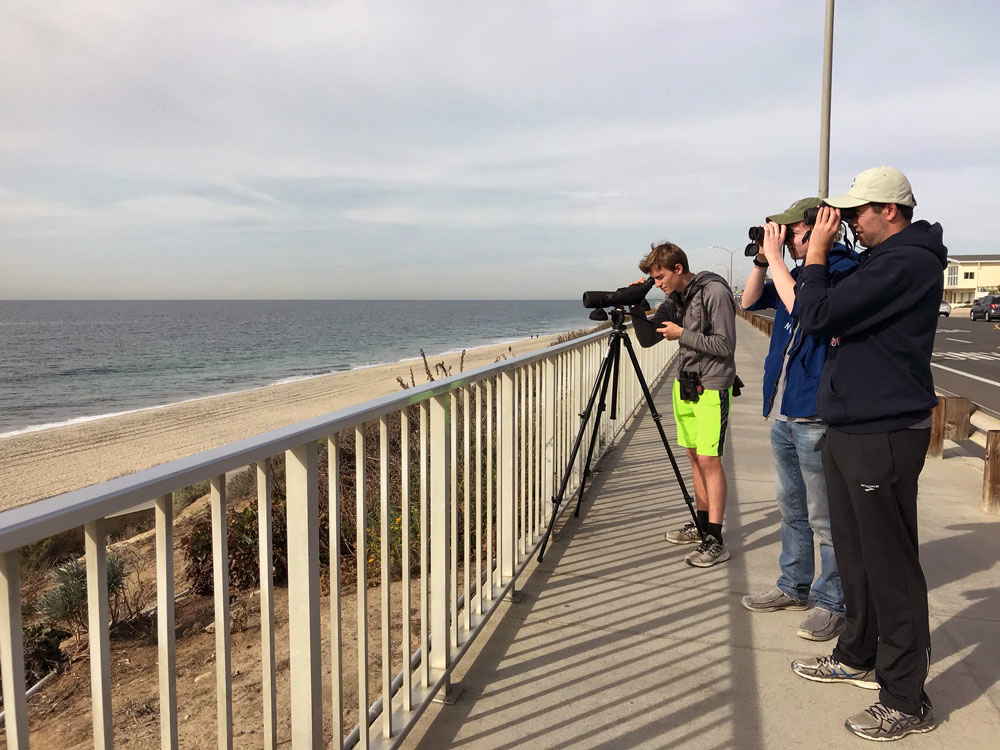 At Christmastime every year, tens of thousands of birdwatchers across the country head out for an annual count. They record every bird they see for the Audubon Society's Christmas Bird Count, now in its 118th year. These citizen scientists provide important data for academics and decision-makers. Living on Earth's Jenni Doering follows California Oceanside teams as they hunt for birds at lagoons, saltwater marshes and beaches.

CURWOOD: It’s Living on Earth, I’m Steve Curwood. In the natural world that surrounds us, even in cities, birds can be found almost anywhere, from noisy crows squawking in a park to pigeons pecking around on the ground. And every Christmas for over a century, there’s been a yearly bird count, an occasion for bird lovers and citizen scientists to head outside to take note of these creatures sharing our world. And in the last days of 2017, they included Living on Earth’s own Jenni Doering who joined the count in Oceanside, California.

DOERING: On a Saturday morning two days before Christmas, the freeways of north San Diego County hum with a constant flow of shoppers on a last-minute search for that perfect gift, or travelers on a long haul to visit family for the holiday.

DOERING2: But at an overlook for a saltwater lagoon in Oceanside, among the rush of traffic, two people listen closely for sweeter sounds and peer through powerful binoculars.

DOERING: They’re birdwatchers, drawn to the Agua Hedionda Lagoon Ecological Reserve by the many birds that live here or visit on long migrations.

DOERING: Gretchen is petite and bespectacled; Andy is solidly built, and both are dressed in layers for the morning chill.

MORROW: So our objective this morning is to go through our territory, visit all the different types of habitat that we can find, and tally all the different bird species as well as the individual number of birds within each of those species. 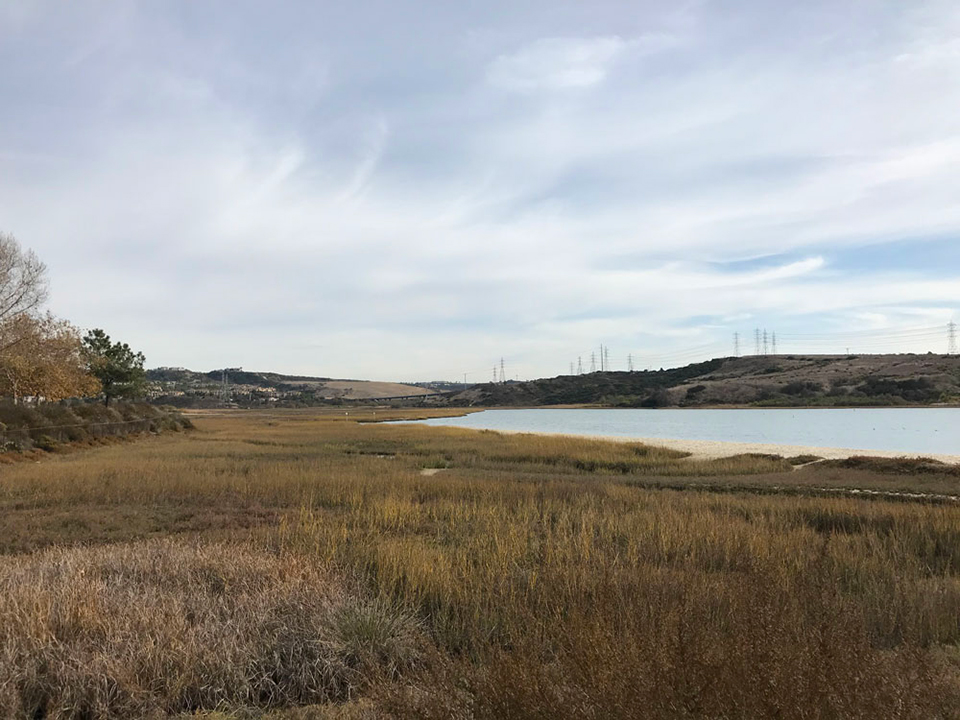 MORROW: Before the 1900s, the common thing to do was to go out on a Christmas bird hunt and shoot as many birds as you could, and then you would gather together and count up the number of birds that you’d killed and see who was the winner. And that did not sit well with some of the people that were more interested in the birds themselves.

DOERING: So, in 1900, a member of the fledgling Audubon Society organized the first Christmas Bird Count.

Today, some of the most prolific counts are in Southern California, thanks to the famously mild winter weather and the diversity of ecosystems here. Gretchen Nell squints through her binoculars at the salt marsh below. 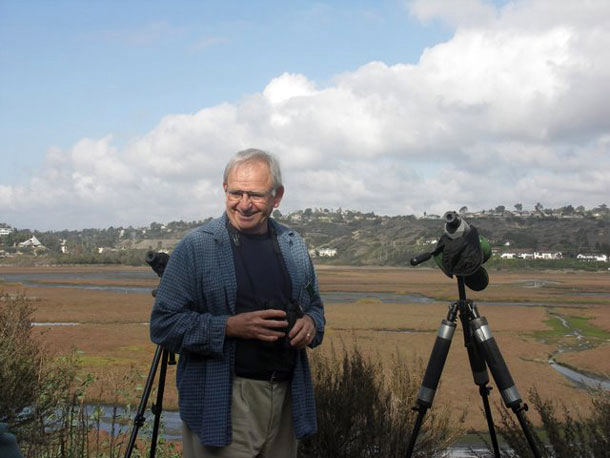 MORROW: So the Northern Harrier is called a marsh hawk, also, and you can see it right now in front of us, the way it glides along just above the surface of the marsh. And it is trying to scare up either birds or more likely rodents that it can prey upon.

DOERING: Nearby, two people on paddleboards glide up a channel between marsh grasses.

MORROW: From our perspective, keeping an eye on them as they go along that channel might be productive, because they’re gonna scare up a few birds that otherwise would be sitting down there, and maybe we’ll see them in flight. 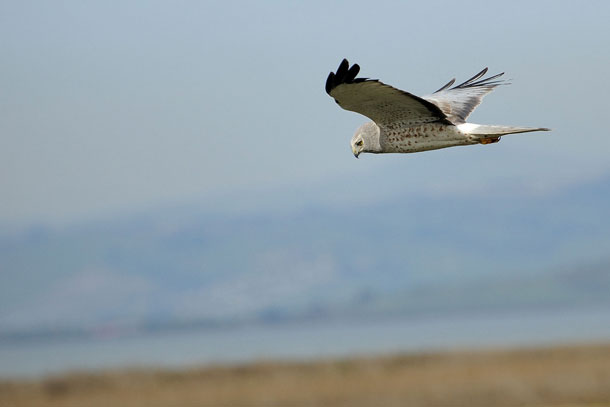 NELL: So we have helpers that we hadn’t anticipated.

DOERING: This refuge, like most in Southern California, is an expanse of undeveloped land and water surrounded by a sprawling city, and it’s bisected by buzzing high-voltage power lines.

MORROW: We can never totally escape civilization when we’re birding but yet you have these little moments of time when you do get out there in nature; it still exists right here in the middle of our community.

DOERING: In fact, the Christmas Bird Count seeks out birds in all environments – including highly urban ones.

[SOUNDS OF A PARKING LOT]

ANDREWS: Well, this is it: remarkably clean parking lot.

DOERING: In front of a grocery store not far from the lagoon where Andy and Gretchen are making their count, three teenage birders document the pigeons, gulls and crows that like to forage here.

ANDREWS: Ryan Andrews, and I’m 18. [BRIEF PAUSE] On a normal day no birder would ever come to like this parking lot because it’s literally just a parking lot. [LAUGHS] But sometimes you get Brewer’s blackbirds; or some other things that you won’t often get in other places. Like, Brewer’s blackbirds, I’ve had people joke that the most reliable place for them is a McDonald’s parking lot. There are some species that like trash, basically. [LAUGHS] And so you have to go where there’s trash. 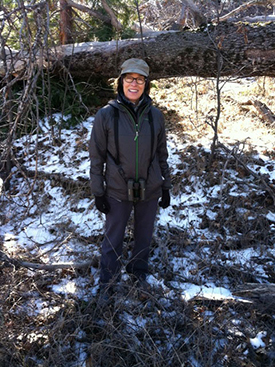 DOERING: He can trace his passion for birding to a white elephant gift exchange, the Christmas when he was seven years old.

ANDREWS: We brought a bird feeder, we were hoping not to get it, and we end up getting it. [LAUGHS] So we’re like, okay, that works. Um, and then, it’s like just in our basement – and then finally we put it up, and this is actually when I lived in Missouri and we were part of like a youth organization that the Missouri Conservation Department runs, and they asked us to count bird species that come to our feeder. So I started doing that and then when like the time period we were supposed to do that ended, I just didn’t stop. I just kept on counting birds and looking in my yard and then it kinda just spiraled out from there. By like 2013 I was like, I just was birding constantly. So, been hooked since! [LAUGHS]

DOERING: Ryan’s found lots of rare birds over the years – and though it’s also rare to find a teenage birder in basketball shorts and a hoodie, he says if you know where to look, there are plenty of young birders.

ANDREWS: I think that technology has helped with that; in past 5-10 years there’s been like a massive increase in number of young birders. Most of us like meet online in different forums; we have a young birder chat with like probably only like 100 members, ish, but that’s still like 100 members and we’re from all over the country and a few people from like Australia and Singapore and stuff.

DOERING: They connect through the most popular birding app, e-Bird, where they can submit checklists. Social media plays a big role in sharing their successes with each other, too.

ANDREWS: Like, I mean we’re all teenagers so Instagram, Snapchat, those types of things are big. [LAUGHS] A lot of people are on Facebook which I’m not, which makes me sad a lot of the times ’cause like all the good rare bird alerts for like the country are on Facebook.

DOERING: Ryan, B.J. and Max want to cover more territory, so we head to the beach, just a mile away.

[SOUND OF CAR DOOR, AND DRIVING, THEN WAVES ]

DOERING: The sand is soft, almost silky where it’s dry high on the beach, and warm with the midday sun. Small shorebirds called sanderlings chase the water as it pulls back out to sea, then run away as it slides back up the beach. Every bird counts in the Christmas Bird Count; even common species like gulls. Zooming in 60 times through his spotting scope, Ryan locates a big flock floating just beyond the surf.

DOERING: Pelicans soar overhead with their huge beaks and loose throat pouches; beyond the waves, dolphins gambol in the Pacific, a nice surprise dividend after peering at the horizon all morning, looking for birds. It is hard work, though fun; most teams are out in the field by 5:30 a.m. and stay till after noon.

DOERING: But when the one hundred or so birders from the Oceanside Bird Count all gather at the local nature center to compile their lists and quell their hunger with a hearty lunch of chili, the excitement is palpable. 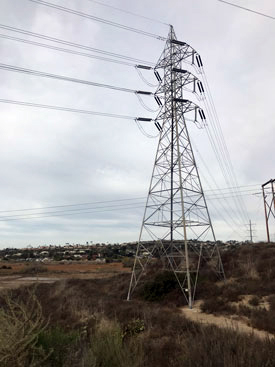 DOERING: One of the leaders of the flock calls the room to order.

MAN: I know we don’t want to be here ALL afternoon.

DOERING: Andy Morrow steps up to the podium to officiate the count.

MORROW: All right! This is… what is this, this is the 118th Audubon Christmas Bird Count. And the Oceanside count has been in business since 1955. And that particular count, I think we had 117 species, 8 birders went out and did it.

MORROW: And just for the heck of it I looked at that count and there were 54 loggerhead shrikes seen on that one.

MORROW: Those were the days, when we had loggerhead shrikes.

DOERING: Andy starts going down the list and the birders call out whether they’d seen that species today.

DOERING: It takes several minutes to run through the whole list, and at last, Andy counts them all up.

MORROW: All right – our preliminary count total for the 2017 Oceanside Christmas Bird Count is [DRUMROLL ON THE WOODEN PODIUM] … 181 species. 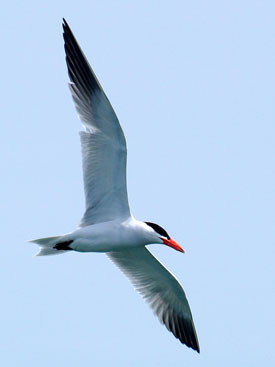 DOERING: The final count – which included the results from a team that was still out on the ocean counting birds – recorded 193 species, not far from the record of 200 set several years ago. Perhaps even more impressive was the sheer number of birds the 115 birders recorded: thirty-five thousand that day. But several species were at record or near record lows this year: Forster’s Tern, Caspian Tern, the Greater Yellowlegs, and the Loggerhead Shrike. Habitat loss and climate change are largely to blame, says Andy Morrow.

MORROW: Certain birds are retracting and abandoning certain areas because they no longer have the resources any more that they used to because the climate has changed for them.

DOERING: Yet that change means that other species appear to be thriving: the Great Horned Owl, the Merlin, Hutton’s Vireo, and the Acorn Woodpecker. And the birds that once were shot on Christmas, now instead help tell a story of a changing world. The sharp eyes and keen ears of birdwatchers everywhere help translate their flights, calls and songs into actionable data that will be instrumental for the scientists and decision-makers who hold the future of the environment in their hands.

For Living on Earth, I’m Jenni Doering in Oceanside, California.


About the Christmas Bird Count