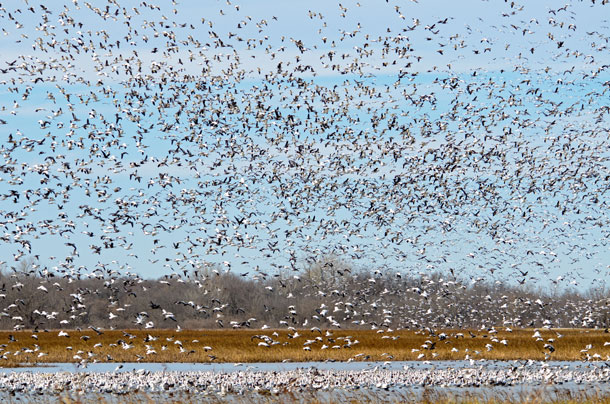 Seventeen former Department of Interior officials have written a letter protesting a new DOI ruling that exempts industry for negligent deaths of birds , and may violate the century-old Migratory Bird Treaty with Canada and other nations. Living on Earth Host Steve Curwood spoke with Paul Schmidt, a former Fish and Wildlife official who served administrations from Presidents Carter through Obama.

CURWOOD: From PRI, and the Jennifer and Ted Stanley Studios at the University of Massachusetts, Boston, this is Living on Earth. I’m Steve Curwood. If there is one group of creatures that nature has endowed with command of Planet Earth, it has to be the birds. They can fly, swim, and walk, and they are especially adept at ignoring the borders based on politics. And our show this week is all about birds, as 2018 is the centennial year of the Migratory Bird Treaty Act, which National Geographic and Audubon, and others are celebrating as the Year of the Bird.

We begin with some irony, though. The Migratory Bird Treaty Act and related rules have helped safeguard many birds over the past century, but the Trump Administration has reinterpreted it in a way that would loosen its protections, and shield companies that kill birds from prosecution. That new interpretation has prompted a protest letter from some 17 former wildlife officials from both Republican and Democratic administrations. The letter organizer is Paul Schmidt, who served the Carter through Obama Administrations. Welcome to Living on Earth!

SCHMIDT: Thank you, I’m glad to be here, Steve and Living on Earth.

CURWOOD: Now, the Migratory Bird Treaty Act, what's the purpose of this act?

SCHMIDT: Well, the original purpose was actually to establish a continental approach to managing and conserving migratory birds, about a century ago, actually. It began with a treaty with Canada back in 1916, when folks realized that migratory birds don't recognize political boundaries and that there needs to be cooperation throughout the lifecycle of a migratory bird in order for there to be success, if you will, or good management of that population. 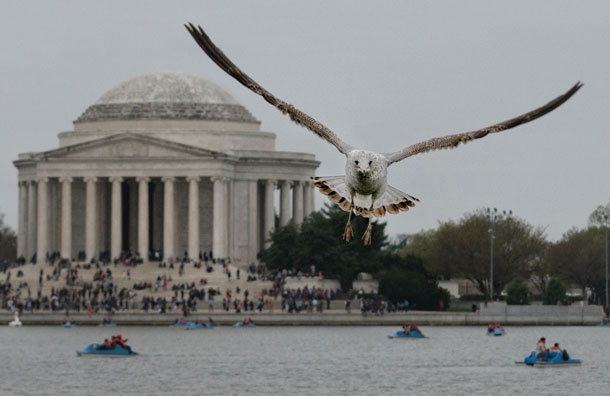 CURWOOD: So, I understand that the Migratory Bird Treaty Act began as a way to deal with the hunting of birds for their feathers and such, but in modern times it's been used in different ways, I understand related to the Exxon Valdez incident, for example, or the explosion of the Deepwater Horizon offshore drilling rig in 2010. How was that law used to protect birds in those instances?

SCHMIDT: In those instances where there was negligence or gross negligence and the spilling of oil that ended up killing thousands of birds, it was used in a punitive manner to fine the companies responsible for those actions, in this case BP and contractors associated with that spill, and of course the Exxon Valdez back in 1989 when that disaster occurred in Alaska.

CURWOOD: And now how has Secretary Zinke chose to interpret this law and what's your objection? I gather the oil companies don't much like this among other folks.

SCHMIDT: Well, Secretary Zinke and his Department of Interior have interpreted it in a way to really narrow the use of the Migratory Bird Treaty Act. Heretofore for decades - hence the 17 signatories to that letter, back to the Nixon administration, are objecting to this narrow view where someone is only violating the law if they intentionally and purposefully killed or took that bird. It wouldn't, for instance, be able to be used as a tool in conservation as it has been for decades to prevent such things as oil spills or mass electrocutions on electric wires and power lines, wind turbines, oil pits. And in the examples that we already talked about in terms of Exxon or BP, it certainly wasn't any intention on the part of those companies to take or kill those thousands of birds. But it happened,s and it happened as a result of some negligence or improper behaviors in some fashion. So, that use of the MBTA has been eliminated now with this new interpretation that is precedent-setting, frankly, and goes against all Republican and Democratic interpretations over the past 40-plus years.

CURWOOD: Talk to me about the oil pits. What exactly are the oil pits that this law used to protect birds from and how difficult is it to make these oil pits safe for birds? 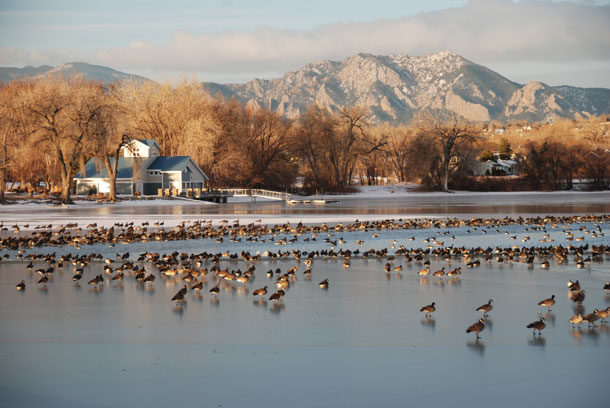 SCHMIDT: Well, in the process of developing oil and bringing it to the surface there are waste pit areas around those wells that are used to store oil, and they become an attraction to birds that are flying overhead. They don't recognize that that's a toxic material. They will view it, frankly, as a watering hole and immediately fly down and become -- the chemical exposure, they end up dying. It was recognized that that was a fairly significant problem particularly in some parts of the west 20 years ago. And therefore technologies were developed, techniques whereby you put a netting over that oil in order to keep the birds from committing suicide, if you will, inside an oil pit.

CURWOOD: What legal challenges, if any, are being mounted to oppose the Trump administration's interpretation of this law?

SCHMIDT: I don't know currently of any legal challenges right now. It's early in the process. It's only a couple of weeks old. Interesting enough, in the Migratory Bird Treaty Act, there is no civil suit provision. In other words the author allows civilians to bring suit against the government for not enforcing the law, if you will, unlike some others like the Endangered Species Act which does have a provision that allows for organizations or individuals to take issue through the courts.

CURWOOD: I imagine that Canada or Mexico or other nations who are parties to the Migratory Bird Treaty might have standing to bring a complaint.

SCHMIDT: Of course they do and, in fact, I understand that the Canadians are considering exchanging a diplomatic note with the United States expressing their concerns because it was just a few years ago when I was serving in the US Fish and Wildlife Service that we exchanged diplomatic notes relative to the Migratory Bird Treaty with Canada affirming both countries interpretation, and it's ironic that now Canada would have to come back to us and express concern or objection for a brand new interpretation that violates that diplomatic note that was exchanged between our State Department and the Foreign Affairs Office in Canada.

CURWOOD: So, how important is this Migratory Bird Treaty Act?

SCHMIDT: Well, for some of the takings that occur out there, there aren't any substantial protections if this is removed. Frankly, it was one of the first environmental laws, conservation laws on the books, that gave us sort of the road forward for conservation. And it's kind of a shame that we would roll it back after 100 years of success to where it will be narrowly interpreted and potentially cause more migratory birds to end up on things like the Endangered Species List. 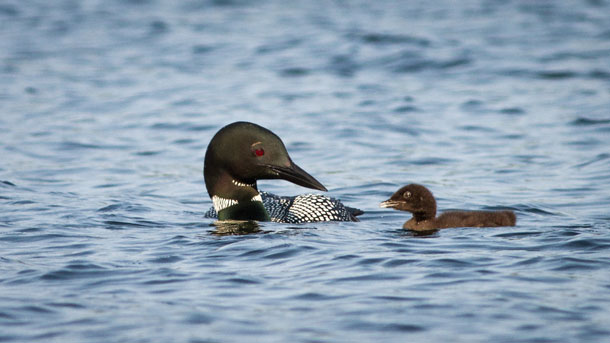 A Common Loon with a chick in the state of Maine. (Photo: Fyn Kynd, Flickr CC BY 2.0)

CURWOOD: And of course, Paul, in your role as the Fish and Wildlife Service assistant director for migratory birds you were even-handed, but on a personal level what's your favorite bird?

SCHMIDT: [LAUGHS] Well, Steve, one of my favorite birds is the common loon. It is a mystical bird particularly where I grew up enjoying some summers, and that bird and the sound it makes -- a lonely sound [SOUNDS OF LOON CALLING] on a clear Maine lake -- is something very, very special. It holds a special place in my heart.

CURWOOD: Paul Schmidt is a former Fish and Wildlife Service Assistant Director for Migratory Birds. Paul, thanks so much for taking the time with us today.

SCHMIDT: I've enjoyed speaking with you, Steve, and good luck to you.

The letter drafted by Paul Schmidt and his colleagues

More on the conservation rollbacks from Zinke’s Interior Department