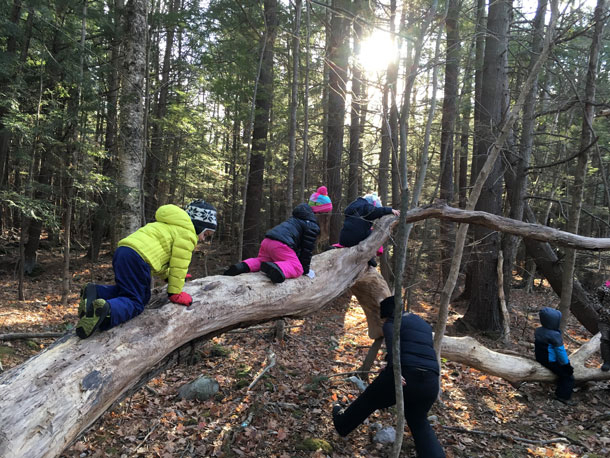 The students work on their motor skills by climbing up and over a fallen tree in the woods. (Photo: Bobby Bascomb)

Nature-based preschools, where children spend most of their day outside, are a growing trend in the United States. Living on Earth’s Bobby Bascomb reports from a school in Chester, New Hampshire that kids who learn outdoors have better academic results – including higher scores on standardized tests – while they learn to love the outdoors and have fun.

CURWOOD: It’s Living on Earth, I’m Steve Curwood. If you ever wondered why America is slow to protect the environment compared to Europe, you might consider how we educate our children. Play is the serious business of childhood, as Swiss developmental psychologist Jean Piaget famously declared, and at about the age of three, kids begin noticing how their play interacts with the environment around them. Starting preschool at three is a predictor of success as an adult, and some say a predictor of lifetime environmental awareness if it includes plenty of structured play outside, an approach more popular in Europe. But it also has believers here in the US, and Living on Earth’s Bobby Bascomb takes us now to a nature preschool in wintry New Hampshire.

[SOUNDS OF WALKING ON ROCK]

BASCOMB: Parents gripping cups of hot tea and coffee drop their kids off at pre-school on a cold sunny morning in Chester, New Hampshire. 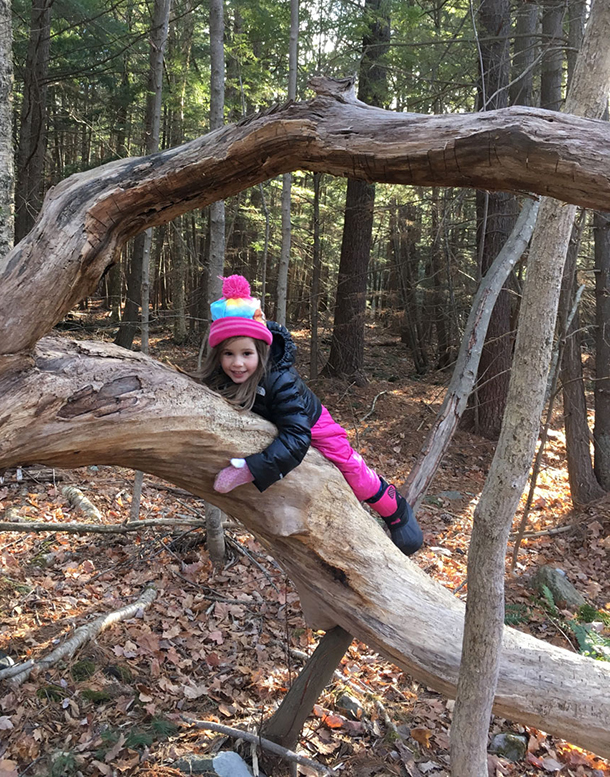 The kids seem to love exploring and playing in the woods. (Photo: Bobby Bascomb)

BASCOMB: The toddlers, wearing brightly colored snow suits and wooly hats, waddle towards a big log next to a pile of sand. A few pots and pans and lots of imagination make that fallen tree a kitchen and the sand pretend food.

BASCOMB: The kids run around, dig in the sand, and play kitchen until their teacher, Sarah Drowne Surrette, lets them know it’s time to get started with school.

BASCOMB: Sarah’s kindergarten group are the Great Horned Owls. She hoots to get their attention and they respond.

SARAH: Does everybody have their snow gear on?

BASCOMB: Ready to head out into the eight acres of forest and field that are the Chesterbrook School of Natural Learning.

[SOUNDS OF WALKING AND SHOUTING]

BASCOMB: Sarah taught first grade in a traditional public school for 13 years but for her oldest daughter, Olive, she wanted a different experience. So she started a nature-based preschool for her toddler and one other child. Two years later she has 36 students enrolled in three different classes and a long waiting list. 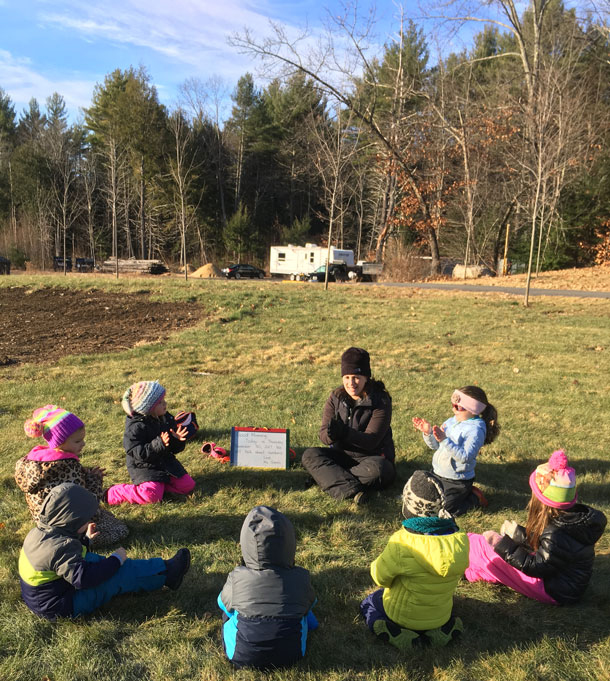 Sarah and her students sit for their morning meeting at a sunny spot in a field. (Photo: Bobby Bascomb)

Sarah and her seven kindergarteners hike to a sunny spot in a field for their morning meeting. The kids take off their backpacks, sit in a circle and listen to Sarah.

SARAH: This morning I looked up and right over there into the field I saw two giant creatures that had four legs, they were brown, and they were running.

BASCOMB: She puts her thumbs to her temples and spreads her fingers wide.

SARAH: And one of the creatures had these big things on top of its head. Do you want to take a guess at what they were?

SARAH: Buck, it’s the dad. That’s right and the other one didn’t. Do you remember?

BASCOMB: Then Sarah helps the kids read a message she wrote on a white board about what they’ll be doing today.

SARAH: Oh, you were doing what good readers do. You looked at that beginning letter. She saw a T, she thought it was Tuesday. We have another day of the week that starts with a Th and Th makes this sound thhh…

BASCOMB: After reading together, there’s a short math lesson and discussion about the difference between wild and tame animals.

SARAH Alright, my friends I think we we’re sitting long enough. Why don’t we hike out to the forest, okay?

[SOUNDS OF CHILDREN YELLING, AND RUNNING]

BASCOMB: The kids run towards the forest and tell me the best way to go.

BOY: So follow us, don’t go under the big tree!

BASCOMB: Down a path in the woods at a clearing, there’s a huge fallen tree. They take turns crawling up and over it.

SARAH: This is where they’ll work a lot on their gross motor, you’ll see them with cooperative learning.

BASCOMB: These children are outside snow, rain or shine, every day through the long, New England winter unless it’s so windy that falling branches and debris are a concern. They dress in warm layers, but five year old Phoebe says there’s another way they stay warm. 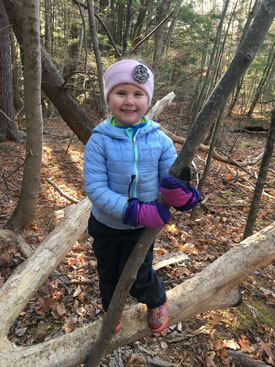 PHOEBE: We climb trees and climb stuff and we walk around to get our bodies warmer.

BASCOMB: Further on they stop at a frozen puddle to slide around on the ice.

GIRL: When there’s really hard ice we like to skate on it!

BASCOMB: Sarah says they collected chunks of ice like this to build with. In fall they harvested grapes to make jelly and in early spring they’ll learn how to make maple syrup.

BASCOMB: After a couple of hours it’s time to hike back to the classroom for a snack the kids prepare for themselves, followed by more math and letter flash cards. Then lunch, meditation and yoga. Finally, back out to the forest for the afternoon before parents come to pick them up.

BASCOMB: Erin Terry is mom to three year old Olivia. She says at first she was hesitant about her daughter being outside every day.

TERRY: Because I thought inside is safer. There’s ticks outside, it could be dangerous in the forest, they could get lost. Things like that. And then once she started coming here I just noticed how much she was growing educationally and socially.

MCGREW: Personally, I wish that every student that I’ve ever had or will come across would have an opportunity like this. It’s not something that every child is able to have, especially in the inner city schools that I was teaching in.

BASCOMB: Nature-based preschools have been popular in Europe for decades, especially in Germany and Scandinavia. They are a relatively new idea in the US but are becoming more common – a recent survey found there are more than 250 nature-based preschools across the US, two-thirds more than last year. Advocate Richard Louv says that growth is good news for kids. 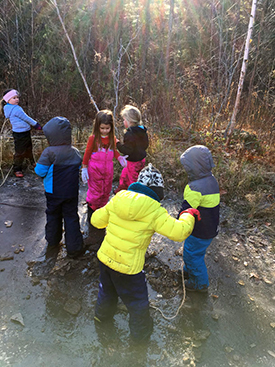 The kindergarteners slide around on the ice and work together on problem solving. (Photo: Bobby Bascomb)

LOUV: There is a new body of evidence out there that really shows a connection at least between spending more time in nature and being healthier, happier, and maybe even smarter.

BASCOMB: Richard Louv has written nine books about children and nature and co-founded the Children and Nature Network. In his book Last Child in the Woods, Louv coined the term ‘nature deficit disorder’. It’s not an actual medical diagnosis, but he points out that the last decade or two in which children spend less time outside coincides with a rise in childhood obesity. Louv says simply sitting in a classroom all day can be a problem for kids.

LOUV: Just about everybody knows that sitting is the new smoking. It produces many of the same diseases or symptoms as cigarettes. And so, many people have standing desks and all of that and yet our children are still sitting in the schoolroom aren’t they? And we’re cutting recess, and this goes against decades of research that show physical activity stimulates cognitive functioning. It improves physical health. It makes better students, and yet we’re ignoring that research.

BASCOMB: Louv worries that kids learn about weather events like hurricanes and climate change in school and can see nature as threatening instead of welcoming. He says it’s important for kids to develop a personal relationship with nature while they’re young.

BASCOMB: It’s that personal relationship that Sarah’s students at the nature school are working on and … singing about.

SARAH AND KIDS (singing) It’s a great day to be alive. I know the sun still shines when I close my eyes. There’s fun times in the neighborhood and why can’t every day be just this good. 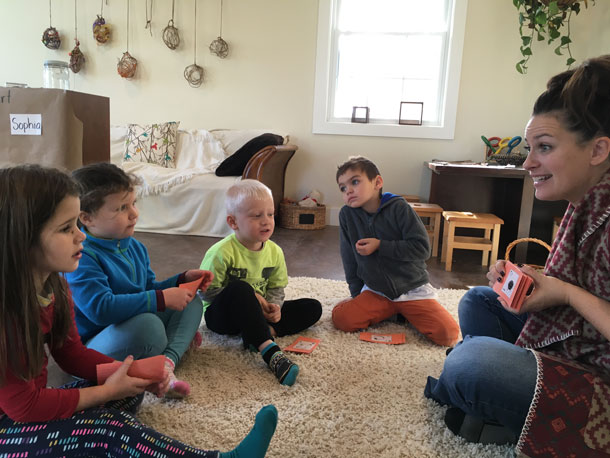 Sarah and her students work with letter flash cards in the classroom. (Photo: Bobby Bascomb)

BASCOMB: Of course, preschools like this aren’t necessarily an option for most kids but there are things parents can do with their children to foster a love of nature ... Read a book outside. Turn over rocks and see what’s living there. Richard Louv suggests a belly hike – get down on your belly in the backyard and have a close look at all that lives between the blades of grass … all things to give children a sense of the diversity of the world and their place in it.