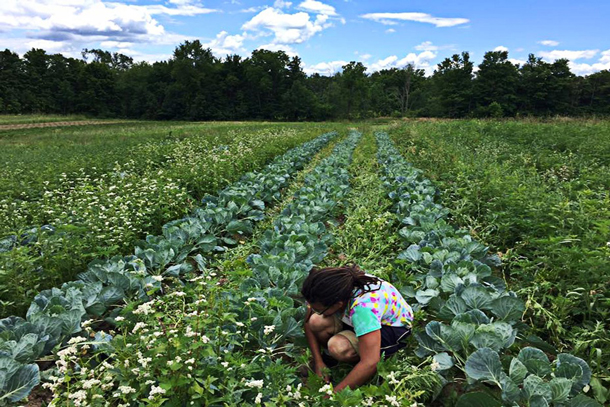 On Matt Herbruck’s farm, they’ve shifted away from growing leafy greens because of changes in the weather. (Photo: Birdsong Farms)

Wild swings in the weather mean that some farm crops will flourish, while others will struggle. Allegheny Front reporter Julie Grant spoke with vegetable farmers in Pennsylvania about how the changing climate is changing our food and their future.

Hurricane Maria wiped out 80 percent of Puerto Rico’s crops, shredding bananas and plantains and stripping coffee trees. In Florida, three quarters of this year’s orange crop was torn off by Hurricane Irma, and Texas farmers face huge losses from cotton and rice, submerged by Hurricane Harvey. Global warming increases the intensity and duration of these storms, and we can expect the trend to continue. But it’s not only violent storms that disrupt agriculture. Wide-spread droughts and heatwaves make farming increasingly unpredictable.

As Julie Grant of the Allegheny Front reports from Pennsylvania, there can be winners as well as losers.

GRANT: Farmer Matt Herbruck is glad he doesn’t have to focus his vegetable crop on peppers again this year. In 2016, the weather was so hot and dry.

HERBRUCK: Sometime in June, I could clearly see this was going to be one brutal summer.

GRANT: He says temperatures were five to 10 degrees above average, and instead of the usual 12 inches of rain from May through August, they only got two inches all summer.
It wasn’t enough water to grow lettuce and leafy greens.

HERBRUCK: So we went big into peppers and eggplants and things like that. Unfortunately peppers are really not the most lucrative crop, but we had a lot of them so that was nice.

GRANT: After 22 years of farming, Herbruck says it’s undeniable, the climate is changing, and it’s getting more extreme.

HERBRUCK: It’s not unusual at all in this area to go from in the 40s one night to 90, 36 hours later. It happens. And that’s not normal. I think the weather is crazy.

EGAN: I hear a lot about that from our farmers.

GRANT: That’s Franklin Egan, director of Education at PASA, the Pennsylvania Association for Sustainable Agriculture. And he says it’s more than just talk. He points to data from the USDA that show that while the amount annual rainfall in Pennsylvania and the Northeast U.S. has increased only slightly in the past 50 years, the way it’s coming down has changed.

EGAN: We’ve been getting a lot more extreme rainfall events.

GRANT: More than an inch of rain in a day is considered extreme.

GRANT: It’s a startling number and a far bigger change than in any other part of the country.

EGAN: And so, if you put that together, you know, about the same annual rainfall, but more intense rainfall, that means that Pennsylvania farmers are dealing with this paradox of way too much water at certain points of the year, punctuated by short, but often fairly intense drought periods. 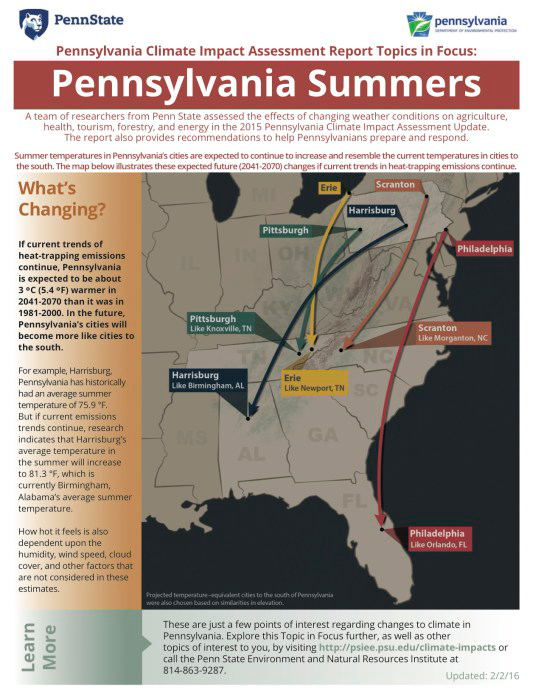 GRANT: And both extreme wet and dry weather can make farming less reliable. And yet, Pennsylvania’s Agriculture Secretary Russell Redding says, climate change isn’t all bad for farms in the region.

REDDING: I would say at this point that it is a mixed bag.

GRANT: According to Pennsylvania’s Climate Assessment, last updated in 2015, those extreme rain events will get worse, and summer heat waves will get more frequent and intense. So places like Harrisburg would feel more like Birmingham, Alabama.
But whether that’s good or bad largely depends on what a farm produces. Dairy, poultry and eggs, corn, vegetables, nuts and fruits are all produced in Pennsylvania.

REDDING: There are going to be winners in this conversation, in terms of their ability to grow extended seasons and different crops, and there’ll be a downside because there’s a lot of production in agriculture that will not be able to tolerate the continued swings of rainfall and temperatures.

GRANT: One example of that mixed bag: fruit. On the upside, Redding says as the climate warms, new varieties of fruit are already being grown here.

REDDING: We have apple varieties that would have been in the Shenandoah Valley, in Virginia, that are now in Pennsylvania. So they’re real.

GRANT: Redding says improved farming practices could also be driving the success of these new varieties. On the downside, the warming conditions are implicated in new, unwanted pests. The Agriculture Department recently issued quarantine in six counties, to prevent the spread of the spotted lanternfly, a black, red and white insect that first appeared in Pennsylvania, and the US, just a few years ago. It could devastate the state’s tree fruit and grapevines.

REDDING: That becomes a major concern for us.

GRANT: For many farmers these unanticipated changes, and all the variability, mean they have to continually adjust their plans to suit the warming weather. Dairies are adding air conditioning to keep cows cool enough to produce milk. In fields, more are adding irrigation systems for dry periods. And more crops are being grown in hoop houses, for better protection from weather and pests.

Vegetable farmer Matt Herbruck says for years now he’s been shifting away from working the fields in July.

HERBRUCK: I just can’t. Stuff doesn’t grow that well, and also I’m not going out there when it’s 95 degrees. Who wants to do that?

GRANT: But he also sees some of the benefits of climate change. Nowadays, October is usually still warm enough for planting, so he’s still selling produce in November and December. I'm Julie Grant.


Learn more about this story on the Allegheny Front website