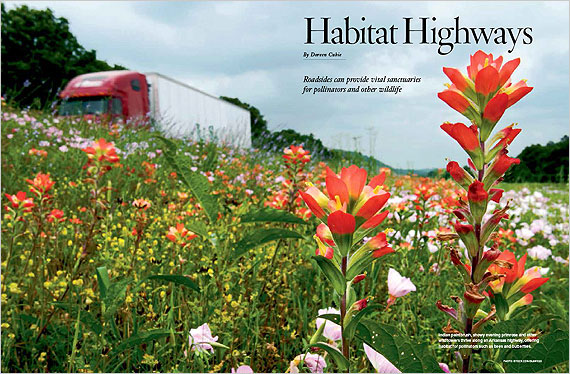 The National Wildlife Federation recognizes roadsides as vital sanctuaries for pollinators and other wildlife. (Photo: courtesy of NWF)

Some 17 million acres of green space line US highways and byways, and it’s vital habitat for pollinators, as well as small voles and mice and birds. Bonnie Harper-Lore, a restoration ecologist formerly with the Federal Highway Administration, tells host Steve Curwood about the value they offer to wildlife and how President Lyndon Johnson’s wife, Ladybird, helped uplift this elongated haven for creatures and wildflowers.

CURWOOD: When you set off for that summer road trip – take a good look at the medians and roadsides. All those miles of broad, green highway rights of way turn out be vital habitats for many small critters, as well as pollinators including bees, butterflies and birds. Bonnie Harper-Lore was a restoration ecologist for the Federal Highway Administration, and a member of the Commission on Minnesota Resources. Welcome to Living on Earth, Bonnie.

HARPER-LORE: Greetings, Steve, how are you?

CURWOOD: Good. Thanks for joining us today. Now, we're talking about those strips of vegetation along the highways. There's often commercial or residential property right behind them. So, nationwide, just how much of this habitat is there?

HARPER-LORE: Well, I think the listeners will be surprised to find out that the area between the pavement and the right of way fence on county, state, and interstate highways adds up to a total of 17 million acres – possibly millions of acres of conservation opportunity. 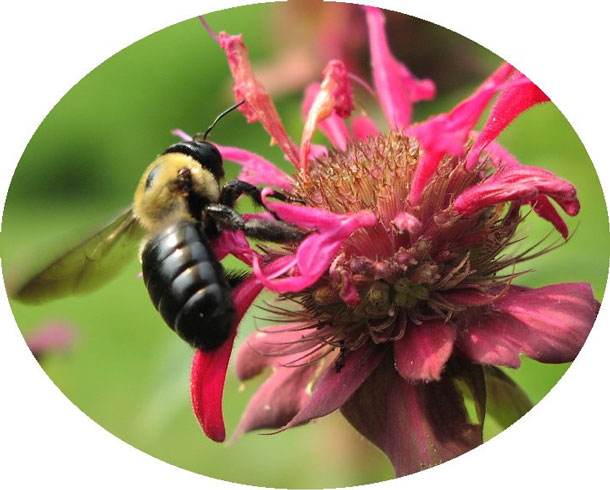 Bees are some of the pollinators that depend on roadside habitat. (Photo: Beatriz Moisset / USDA)

CURWOOD: You know, recently we saw National Pollinator Week, which was a time to celebrate the pollinators, spread the words about what people could do to protect them. So what we have to celebrate in terms of roadside habitat for pollinators now?

HARPER-LORE: Well, the fact that it’s a news item at all is something I'm celebrating because I always saw roadsides from the beginning of my career 30 years ago as an opportunity to benefit wildlife, small wildlife, small birds, small mammals, and migrating birds also use these same corridors. So if they have places to find food and cover, they are all going to do better and their populations will continue to hold where we need them to hold.

CURWOOD: By the way, I also understand that this roadside habitat has some of the most endangered habitat in various areas – like there are parts of the original prairie that are protected alongside roads, sort of by accident. You can sometimes find real old-growth trees. I mean, how much of a treasure trove is this territory?

HARPER-LORE: Well that's just it: We don't have a complete inventory of all of our roadside vegetation. I would indeed like to see that happen because I think we would be surprised at how many remnants of these old forests, old prairies, old wetlands even do exist. We began doing a bit of that inventory in 1993 in California – found 19 remnants within a very short time and began protecting them, managing differently, not mowing and spraying as they had in the past. So there are some of these. I mean, it's surprising that they do exist. I know Florida has also some endangered, I believe, pitcher plants that are growing in their rights of ways and they are now watching over them differently than they have in the past. So if we know they're there we can do differently. 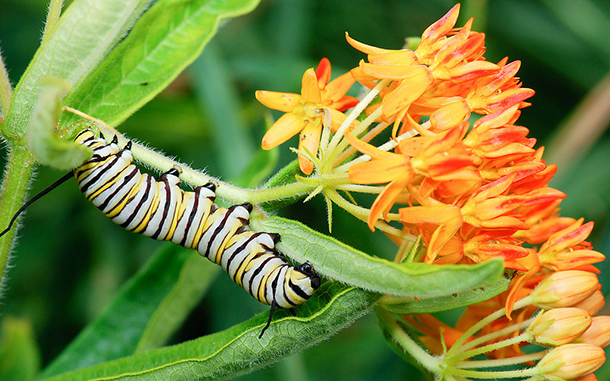 CURWOOD: So, give us the big picture as to who are the partners in these pollinator conservation efforts.

HARPER-LORE: Well, there were actually a few states that were doing pollinator-focused efforts. Wisconsin comes to mind in that the Karner Blue butterfly is an endangered species and they actually put together, I believe, a 20 member partnership quite a few years ago to protect the Karner Blue and that partnership was mostly private sector but some state and county agencies, too, and they've done a great deal to keep the Karner Blue safe in Wisconsin. So those kinds of things have happened individually but you have to realize every state Department of Transportation basically does its own thing, makes it own priorities but now, now that there's been a White House task force there has been a pollinator-enhancing bill, a reauthorization act that actually supports pollinators, all of the states will start moving in that direction, especially if they know the public is interested. So public support needs to be there.

CURWOOD: Yeah tell me about the multistate project known as the I-35 corridor, and what's been done in terms of Monarch protection there?

HARPER-LORE: Well, ironically back in 1993, a group of six states asked the Federal Highway Administration, where I worked at the time, to work together and get some funding to support their effort to actually restore prairie along the I-35 corridor and to protect any remnants that already existed there.

CURWOOD: And remind us where the I-35 corridor is. 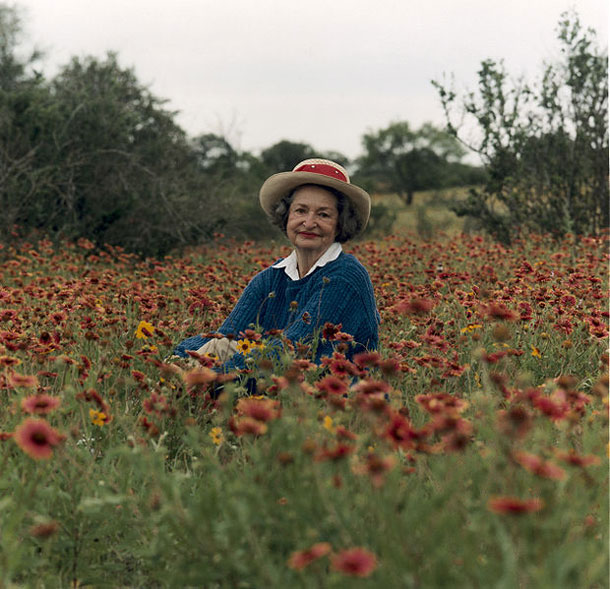 HARPER-LORE: It runs from Minnesota through Iowa, Kansas, Missouri, Oklahoma and Texas, therefore connecting Mexico to the edge of Canada and of course that's where the Monarchs fly.

CURWOOD: What other wildlife uses this roadside habitat? You know, you often see hawks hanging out there. The hunting must be pretty good for them, I guess?

HARPER-LORE: It certainly is. I watch hawks, all kinds of raptors, sitting on the light standards along highways and signposts just waiting for lunch to materialize down there in the vegetation on the roadside. Yes, they do well there because there are lots of mice and voles, other small things possible, plus one that actually motivated reduced mowing here in the Midwest, pheasants and other waterfowl, different kinds of ducks will nest in these rights of ways. So, it's amazing, when you're screaming by at 55 to 70 miles an hour, what's happening out on that green strip that you probably will never ever imagine.

CURWOOD: Lady Bird Johnson, first lady during the Lyndon Johnson administration, her signature cause was highway beautification back there in the 60s. What kind of impact – what kind of lasting impact – has her work had on roadside habitat and pollinators do you think?

HARPER-LORE: Well, I smile because it's because of Lady Bird Johnson that my job even existed with the Federal Highway Administration. I was working for the Minnesota Department of Transportation establishing their wildflower program back in the 1980s when I got an invitation from Mrs. Johnson to come visit with four other states who were also interested in planting wildflowers and we sat and talked with her for two days, and the thing we didn't know she would do – because she asked us what did we need to be able to do more – within that same year, she saw to it that there was an amendment to the transportation bill that requires all states to use a certain percent, not a large enough percent, but a certain percent of their budgets on native wildflowers. So, a few years later, I was looking for a job and I talked to the people I had met at Lady Bird Johnson's and they said, “Well there's an opening in Washington”, and within a few months I was able to be in charge of the national wildflower program. Thanks to her, we've come some distance. I've had people write me with their thank yous for the wildflower program over time. One of them was an 18-wheel truck driver who said, “Thank you for the wildflower program, I drive from coast to coast and it helps me...gives me something to look at and keep me alert and awake,” and I was like, “What a surprising thank you letter that was.” And there are others too. I have a file full of them.

CURWOOD: Bonnie Harper-Lore served in the Federal Highway Administration as a restoration ecologist. She is now with the Commission on Minnesota Resources. Bonnie, thanks for taking the time with us today.

HARPER-LORE: You're welcome. Thank you for what you do.


The I-35 Corridor To Become a Habitat For Bees, Monarch Butterflies, and Other Pollinators

A Transportation Research Board webinar about how roadside mowing affects pollinators

Bonnie Harper-Lore serves on the Legislative-Citizen Commission on Minnesota