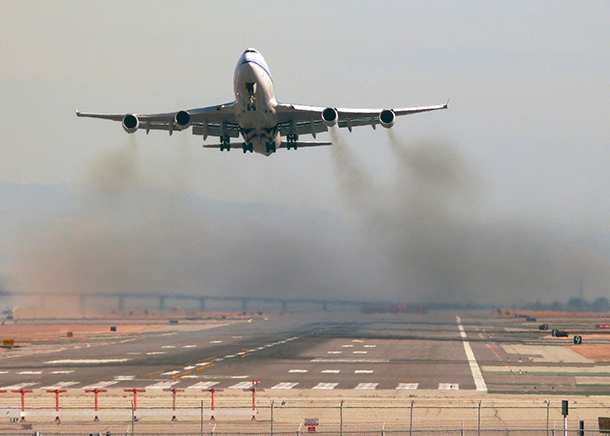 An AirChina Boeing 747 releases plumes of exhaust as it takes off out of San Francisco. According to Nancy Young, fuel is the number one cost for her organization’s constituent airlines and motivates them to reduce emissions. (Photo: dsleeter_2000, Flickr CC BY-NC 2.0)

America’s air carriers have signed on to an international agreement for carbon offsets and reduction, arguing it will prevent unilateral charges on their emissions at foreign airports. But the Trump administration, after pulling out of the Paris Agreement, is reviewing that decision despite vocal support for it from US airlines. Nancy Young, the VP for Environmental Affairs with the trade group Airlines for America joins host Steve Curwood to explain what is at stake for the industry.

CURWOOD: President Trump may have decided to pull the US out of the Paris Climate Agreement, but America’s airlines are still bound by a separate agreement that regulates global warming gases from international flights. The Carbon Offsets and Reduction Scheme for International Aviation, or CORSIA, was signed on October 6, 2016 at the UN and currently has the voluntary support of more than 70 nations, representing nearly 90 percent of international airline activity. The Trump Administration is reviewing the deal, but US air carriers say, pulling out would hurt competitiveness and raise costs.

Joining us today is Nancy Young. She’s the Vice President for Environmental Affairs of the US commercial aviation trade group, Airlines for America. Welcome to Living on Earth.

YOUNG: I'm delighted to be here. Thank you.

CURWOOD: So, I guess a basic problem with regulating carbon from aircraft is they take off perhaps in one country and land in another. So, who is responsible for the emissions? How did the negotiations resolve that problem?

YOUNG: It was a very key issue to be able to have an international body for the 191 countries come together with a single plan for how to address aviation and environmental issues exactly because we do take off in one country and land in another, and having a unilateral measure or a series of unilateral measures would be conflicting, duplicative, and actually counterproductive. 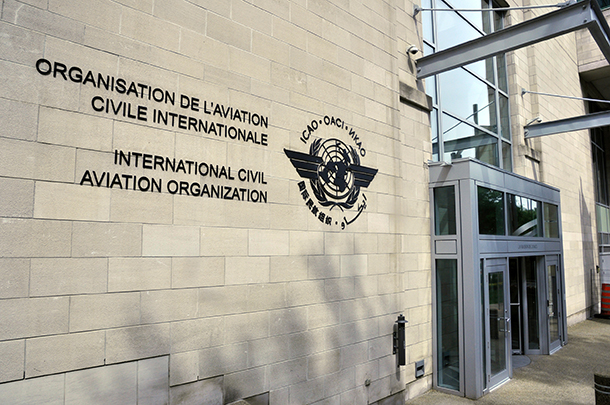 The International Civil Aviation Organization is a specialized agency of the United Nations that deals with the diplomacy of international aviation. Its headquarters are located in Montreal. (Photo: Caribb, Flickr CC BY-NC-ND 2.0)

CURWOOD: So, how is this airline carbon plan structured? What does each face this agreement entail and who is participating?

YOUNG: Well, it was agreed in October 2016 by virtually all 191 international civil aviation organization countries, but it was agreed as an opt-in system, so for the first several years, the first six years, it's an opt-in, voluntary system for the countries. 70 countries have signed up for those first six years, and then after that it becomes mandatory for the rest of the international civil aviation organization countries, all 191 of them, except for the least developed countries and those with very low levels of international aviation activity. The target that we have set is to achieve carbon neutral growth beyond 2020 and that is why from the beginning, actually, we support having the United States in the first six years, the voluntary period, and then into the mandatory period beyond that.

CURWOOD: So, how were these rules conceived, and who are the primary players in putting this together?

YOUNG: Well, the governments are the primary negotiators, but fortunately they also have observer organizations that are accredited, and the international airline association that we work with is an observer, and the environmental groups are also an observer, and, so, we were able to be essentially in the room for most of the discussions over the last many years, and I think that really helped cut through different views around the world when industry was supporting going forward with this deal.

CURWOOD: So, with regards to carbon regulation and aviation, what's the relationship between this agreement, this carbon offset and reduction scheme for international aviation, and the Paris Climate Agreement?

CURWOOD: So, this carbon offset and reduction scheme for international aviation, CORSIA as you sometimes call it, what options does the United States have to pull out of it, the way that President Trump signaled he wanted to get out of the Paris Agreement? 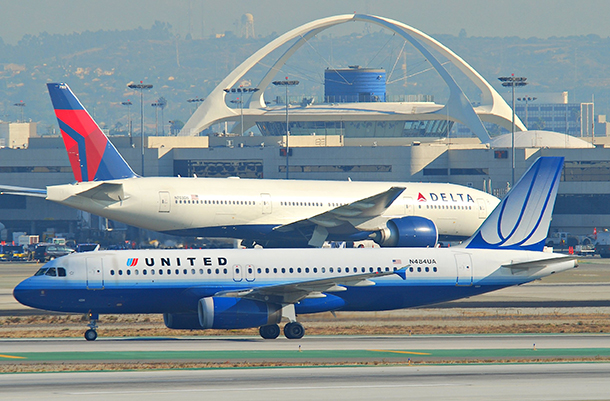 Airlines for America represents many of the country’s largest airlines internationally, including United. Delta, however, separated from the organization in 2015. (Photo: Aero Icarus, Flickr CC BY-SA 2.0)

YOUNG: Well, we like to put it in the opposite way, really. Why should the United States remain in the CORSIA agreement? And one of the key reasons is that it is supported by the US airlines. Why do we support it? One, it helps us support our own climate goals, and, number two, if we didn't have a global agreement for aviation an climate change, when we fly from country to country, they could put unilateral measures on the various US airlines and basically tax and charge us to death. We think that should speak to this administration as a reason to go forward with this agreement.

CURWOOD: So, recently your organization and others stepped forward to say, “Hey things have changed with the Paris climate agreement, but we're sticking with this plan to manage emissions from airplanes and international travel.” What's the Trump administration saying? I understand they are reviewing it at this point.

YOUNG: So, far we continue to work very productively with the administration in the steps that are needed to implement this agreement. From an airline point of view, we think this agreement should speak to the objectives of this administration, to have business-smart, technology-smart, energy-smart solutions for addressing the challenges of industry and international competitiveness.

CURWOOD: What would it mean for the US or any country that decides down the road that they're out of this deal, that they want to withdraw?

YOUNG: Well, I think when you have a unified industry saying, “We want to be in this agreement,” in some ways it answers its own question. How will that industry meet its own goals if it is not part of this agreement, number one, and, number two, if airlines in particular countries are not subject to the agreement, then they face retaliation when they fly to other countries and that could be a real impediment to international commerce and aviation. 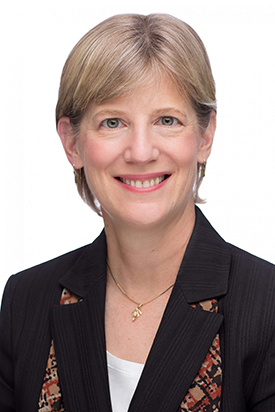 CURWOOD: Nancy, what might industries in the US and around the world learn from the formation of this plan? In other words, what role in international carbon policy development might this template play in the future, do you think?

YOUNG: Well, the CORSIA agreement is the first international global market based measure that applies to any specific sector, and, so, that is a huge historic step, and we were able to reach that by having the airlines work together with the rest of our supply chain, the airframe manufacturers, the engine manufacturers, the airports, and then together we came to an agreement to meet our own goals.

Fuel is the US airlines number one cost in many years, so we're motivated economically to be fuel efficient and hence greenhouse gas emissions efficient. But this CORSIA agreement is, I will say, in some ways a backstop. We need to push technology, we need to push infrastructure, and we need to push on sustainable alternative aviation fuels, and I think that package together is really what the story is.

CURWOOD: Nancy Young is the Vice President for Environmental Affairs of the aviation trade group, Airlines for America. Nancy, thanks so much for taking the time.

YOUNG: Thanks for having me.