EPA Boss Under Fire from Left and Right 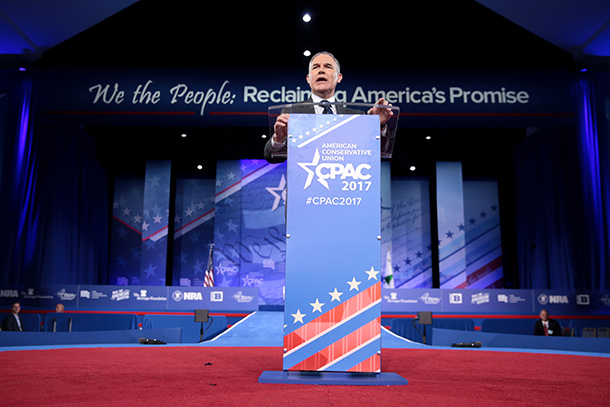 Even before Scott Pruitt was sworn in as EPA Administrator conservation groups had a litany of complaints, but now some conservative voices are also expressing displeasure with his performance to date. Mother Jones Reporter Rebecca Leber discusses with host Steve Curwood why the former Oklahoma attorney general, who sued the EPA 14 times, is not satisfying some wish lists of conservatives.

When it comes to new top level hires for incoming Republican presidential administrations, one of the riskiest positions has to be Administrator of the Environmental Protection Agency. Anne Gorsuch, mother of the newest Supreme Court justice, came into the new anti-regulatory Reagan administration amid calls to cut the EPA budget and was gone herself within two years, thanks to blowback of a Superfund scandal.

Christine Todd Whitman, the former governor of New Jersey came into the George W. Bush Administration after campaign promises to cut carbon emissions, but when Mr. Bush pulled out of the Kyoto Climate Accord Governor Whitman was out of a job after a little more than two years.

Take conservative Fox News anchor Chris Wallace, for example. On April 9, he challenged Mr. Pruitt, who is has denied the human link to climate change, and who had called the Clean Power Plan an overreach.

PRUITT: The President’s keeping his promise to deal with that overreach, Chris. It doesn’t mean that Clean Air and Clean water is not going to be a focus in the future but we’re just going to do it right with the consistency of the framework that Congress has passed, and I think that’s very important to recognize. 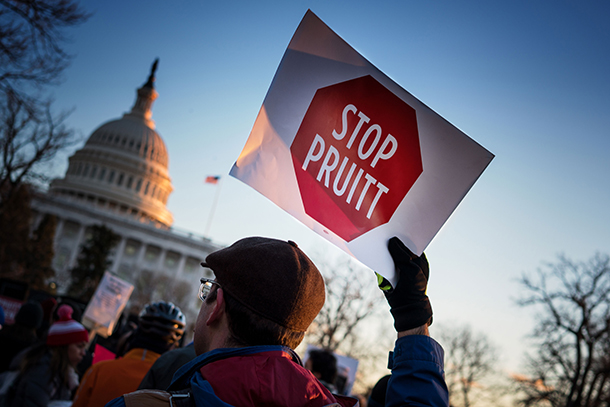 Voices on the left and right have been outspoken in their criticisms and concerns of the new EPA Administrator. (Photo: Laurie Shaull, Flickr CC BY-SA 2.0)

WALLACE: But, Sir, you’re giving me a regulatory answer, a political answer. You’re not giving me a health answer.

CURWOOD: Chris Wallace noted the Clean Power Plan’s predicted health benefits of averting hundreds of thousands of asthma attacks and lost time on the job. And the Fox anchor is not the only conservative voice calling out Scott Pruitt, as Mother Jones Washington reporter Rebecca Leber writes, and she joins us now. Welcome.

LEBER: Thanks for having me here.

CURWOOD: So, why are conservatives giving Administrator Pruitt such a hard time? Conservationists haven't been big fans, but why are the conservatives not so happy with him?

LEBER: Scott Pruitt offered this promise of rolling back the EPA to unprecedented levels - and that's actually a really challenging prospect for him - but conservatives have been hoping for someone like him at the helm of the EPA for years and have a very long wish list of what they would like to see. Their number one mission is to scale back the EPA's role in climate change and to do that, they would have to tackle the Endangerment finding, and that's the scientific and legal basis for all of the EPA's work on climate change and its regulations on vehicle emissions, on aircraft emissions, on power plants.

So, the Endangerment finding was essentially the EPA saying that climate change and carbon pollution and all greenhouse gases pose a threat to human health and the welfare of the US and the world. And conservatives recognize that that poses a big legal challenge for them in taking the EPA out of the equation on climate change.

CURWOOD: So, near as you can tell now, to what extent is Scott Pruitt resisting reviewing the Endangerment finding?

LEBER: That's a good question because I think there's some nuance that gets missed here. Pruitt has said he doesn't see any evidence for reviewing the Endangerment finding at this time and that that phrase "at this time" is key because he seems to be leaving the door open for potentially revisiting it in the future. That also could just be language that is meant to appease some of his critics on the right. It's hard to know at this point. So, at this moment he said he is not interested in reviewing that. Environmental lawyers have argued that's because he sees that a losing case already, even though waged a lawsuit over this as Attorney General.

CURWOOD: So, I don't get it. If he doesn't get the Endangerment finding tossed out then the EPA's going to be required to regulate carbon dioxide as a pollutant, one way or the other.

LEBER: They are, but there are plenty of other ways that the Trump administration can and has been going about weakening the EPA. One of them is through budget cuts. Another is by limiting staffing and just setting up obstacles for the daily work that the agency does.

CURWOOD: So, besides this whole question of endangerment and carbon dioxide as a pollutant, what else has conservatives so unhappy? The conservative media has been rather suspicious of him.

LEBER: So, the...You said conservative media, Breitbart, for example, has been one of the surprising critics recently of Pruitt. When he first was confirmed, a columnist there published really big praise of him and what he can do, comparing him to doing the Lord's work. Just a few weeks later, the same columnist was ripping Pruitt apart for not going far enough in saying that climate change isn't real, and that was in reaction to the Fox News interview, and saying that Pruitt might need to go if he doesn't tackle the Endangerment finding.

CURWOOD: Now, what about the investigation about Mr. Pruitt's ties to the fossil fuel industry that the California Attorney General Xavier Becerra is conducting? 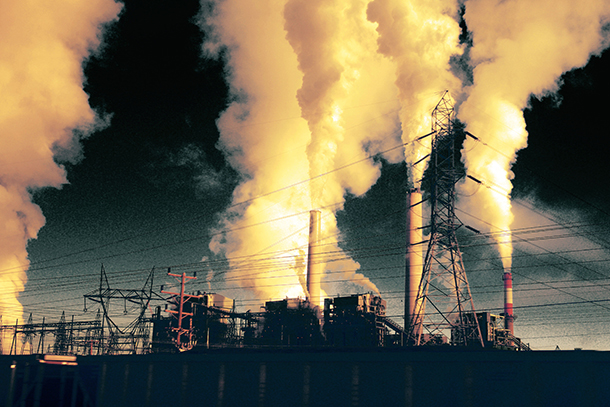 In 2009 after exhaustive review, the EPA made the endangerment finding which classifies greenhouse gases as pollutants that endanger public health. (Photo: Andrew Hart, Flickr CC BY-SA 2.0)

LEBER: So, this dates back to well before his confirmation where environmentalists and Democrats have long sought after his emails and communications with the fossil fuel industry. In some cases, as the New York Times reported years ago, Pruitt copied language from lobbyists in the oil industry. So, Pruitt has been at the center of a lot of FOIA requests. The one that was extremely high-profile was when he was getting confirmed. Democrats pushed to delay his confirmation in order to go through trove of new emails that an Oklahoma judge had just turned over because Pruitt's office had dragged its feet on delivering those emails, and at the rate it's going we could expect more to come out. People are digging through his emails and records, myself included, to discern what that relationship is.

CURWOOD: Now, there's a record of EPA leaders being fired or resigning without completing their full term when the party changes. What do people tell you what lies ahead for Mr. Pruitt with all these conflicts and investigations that are swirling around his very short time so far in office when they come to a head?

LEBER: There's been a lot of parallels made, more by the left, to Ann Gorsuch, who didn't make it very long as EPA administrator and resigned due to mismanagement over Superfunds. And at the moment, Pruitt is alienating people on the left, right, even the middle, on all these issues, and he… Faced with steep budget cuts, if those do come to pass, what the Trump Administraion has proposed could make his job impossible where he says he wants to improve clean water and air and cleaning up Superfunds at the same time the EPA faces its biggest cut to the agency it's ever seen.

CURWOOD: Rebecca Leber is a reporter for Mother Jones. Rebecca, thanks so much for taking the time with us today.

LEBER: Thanks so much for having me here.


Mother Jones: Rebecca Leber’s article “Donald Trump’s First 100 Days in Office Have Been a Disaster. Scott Pruitt’s Have Been Even Worse.”