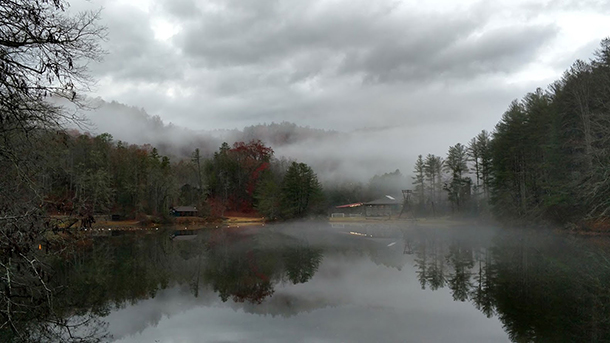 Hundreds of firefighters from all over the country battled the Rock Mountain Fire in North Georgia this autumn. And southern hospitality helped them win the battle against the blaze: a local Orthodox Jewish camp opened its doors to these crews. Reporter Sean Powers visited the campsite.

CURWOOD: At the end of November, hundreds of firefighters from all over the country battled the Rock Mountain Fire in North Georgia. Fighting the huge blaze in the tinder dry hills was a tough battle, but they were offered an unusual place to stay - a local Orthodox Jewish camp. It opened its doors to these crews as they fought to contain the blaze, and reporter Sean Powers went along for a visit.

POWERS: Heavy rain falls at Ramah Darom, a Jewish camp whose Hebrew name means “southern high place.” It’s located in the North Georgia mountains, in the town of Clayton, just a couple hours from Atlanta. Russell Schafer is there, he’s a firefighter from Colorado. His equipment is basic...

SCHAFFER: The only thing we have on our truck is the engineer's box that has all our water stuff and on the other side that has extinguishers. 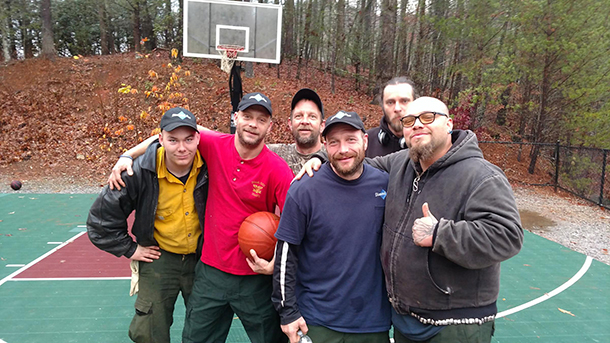 Members of Oregon-based Diamond Fire at Ramah Darom, a Jewish camp in Clayton, Georgia. They stayed here when they weren't out trying to contain wildfires in the North Georgia mountains. (Photo: Sean Powers)

POWERS: Schafer has been waiting all day to head back into the woods to keep working. The storm is keeping him from doing that. I notice he has what appears to be ash on his shirt.

POWERS: Schaffer says being out here is worth it if it means he can save lives and memories. His wife and children are waiting for him back home in Colorado. Here, he's fighting for other families.

SCHAFFER: I’ve been on three fires this season: Hayden Pass in Salatin, Colorado. I was on Twin Lakes in Meeteetse, Wyoming. And this one. It’s almost like a non-combative type of army.

FRANKLIN: Our understanding was, these firefighters are accustomed to sleeping in tent cities out west.

POWERS: That’s Anthony Franklin, the general manager at Ramah Darom. When these firefighters headed south to fight this fire, they found this campsite that can house hundreds of people in cabins and hotels. Franklin says, so far, more 340 firefighters is the one night record.

FRANKLIN: It is November, and we are in the Georgia mountains, and we wanted to offer them at least a nice mattress to sleep on even if it was in a bunking situation. 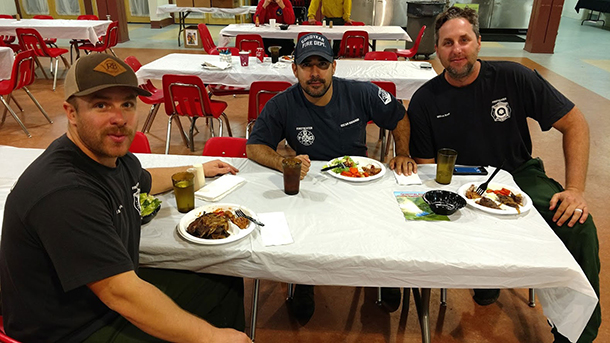 Firefighters from Arizona who fought the wildfire in Clayton, Georgia having dinner at the Ramah Darom camp (Photo: Sean Powers)

POWERS: Franklin drives me around the property. There are eight fire hydrants across the camp, and a tank with 40,000 gallons of water.

FRANKIN: We had already put out a fire hose. Just in case the fire had come our way we could have put water on it, and try to push it back.

POWERS: I asked him who would have done that.

FRANKLIN: My maintenance guys and myself.

POWERS: But these crews haven't had to do that. The fire didn’t get close enough to the campsite. Instead, out of town crews largely relied on water from lakes, rivers, and streams. Franklin says, this whole experience of taking in these firefighters has been eye opening.

FRANKLIN: It’s been very humbling. Very encouraging to meet people of all walks and talks and become friends and realize, you know what? They’re just like the rest of us.

POWERS: We approach a group of them standing outside a cabin. They call themselves Diamond Fire, based in Southern Oregon.

POWERS: Andy Lamb is a member of Diamond Fire. The group works to control blazes and restore habitats to fire-devastated areas. Lamb has been doing this for more than a decade. His reaction when he found out he was staying here instead of camping outside.

LAMB: Yee haw! [LAUGHS] Since we’re from Oregon, this is a whole different world over here. Hospitality. Southern hospitality is real.

POWERS: It’s that kind of appreciation that continues to fuel Yoshi Patrick’s drive to respond to dangerous fires. He’s also a member of Diamond Fire.

PATRICK: What kept me out here was the first time...It actually kind of brings a tear to my eye every time I think about it…but we were driving through a town and you have children on the side of the road saying “You are heroes,” and smiling and waving and saying thank you and… [SNIFFLES] Excuse me. Um, you can’t beat that. 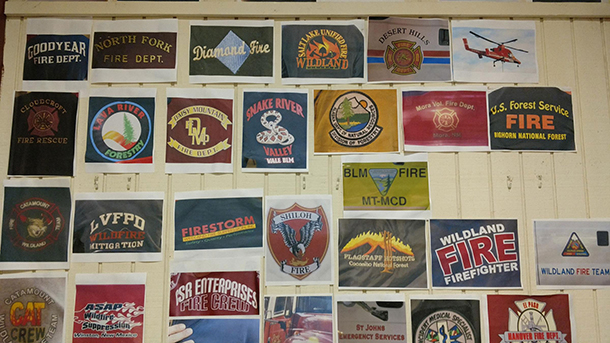 A wall at the Ramah Darom camp features some of the firefighting companies from across the country that showed up to help contain the wildfires in North Georgia. (Photo: Sean Powers)

POWERS: By dinner time, the different crews gather in the camp’s cafeteria.

Glazed carrots cook on an open stove. In the kitchen, Executive Chef Todd Jones is hard at work preparing a kosher meal that also includes lamb and red roasted potatoes.

JONES: Let’s get these lamb steaks in a pan.

POWERS: Chef Jones says food is a way to thank these firefighters.

JONES: They’re big guys. They eat a lot. They require a lot of protein. Yeah, they burn a lot of calories a day, probably three or four times what you or I would in one day, just with the type of labor that they do. So, it’s almost like a family. We’ll be seeing these same guys for a long time. It’s a very small price to pay to cook for them.

POWERS: A small price indeed. In the cafeteria there’s a wall honoring the different firefighting teams that have played a role in stopping the Rock Mountain fire. While the fire is now gone, the firefighters will remain, honored, in memory.

For Living on Earth, I'm Sean Powers in Atlanta.

The fire is being investigated as a human-caused incident