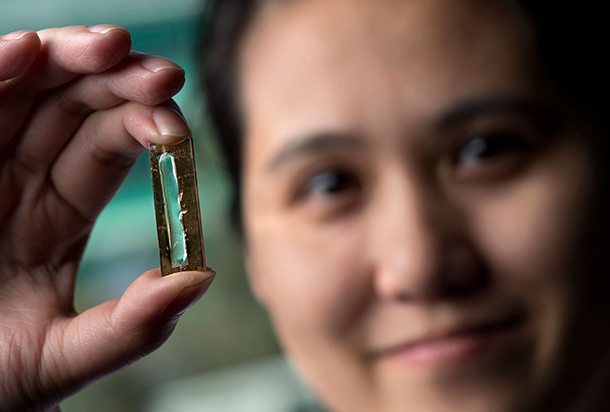 Even the best batteries can only be recharged so many times, but scientists have created a new nanowire based system that increases lifespan dramatically. As Alexander Metzger reports in today’s Note on Emerging Science, the key to this game-changing battery is a special coating.

CURWOOD: In a minute, designer-friendly solar energy roof tiles, but first this note on emerging science from Alexander Metzger.

METZGER: From cell phones to laptops to cars, batteries power many of our everyday conveniences. As these devices become increasingly important, so does the lifespan of the batteries powering them. The popular lithium-ion battery, for example, survives only a few thousand charges at most. So researchers at the University of California, Irvine have developed a technology using nanowires that could increases battery life hundreds of times.

Because Nanowires are about a thousand times thinner than a human hair, bundling them together creates a huge surface area in a tiny volume. This translates to a greater capacity to store and conduct electricity than conventional wires. But there’s a snag: Nanowires quickly degrade when electricity passes through them, a problem that scientists have been working on for decades.

This breakthrough involves using gold nanowires coated in a manganese dioxide shell, and totally encased in an electrolyte gel. This makes wires flexible and resistant to cracking and enables hundreds of thousands of charging cycles with almost no damage to the wires themselves. While gold nanowires could become expensive if used in bulk, the researchers suggest that the same technique could work with cheaper, more common metals.

Scientists believe this technology could revolutionize how we power everything, from smart phones to spacecraft. While it may be many years before these next-generation batteries are on the market, this microscopic breakthrough has the potential to bring about some very big changes.


Read the research paper: “100k Cycles and Beyond: Extraordinary Cycle Stability for MnO2 Nanowires Imparted by a Gel Electrolyte”

University of California Irvine News: “All Powered Up”