Drones are the Future of Agriculture 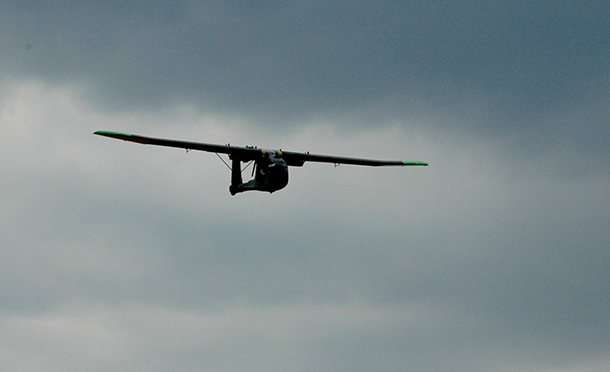 While they have received some pushback regarding privacy concerns, Nikhil says the agricultural community’s response to the company has been mostly positive. RaptorMaps plans to make its product available to farmers beginning next year. (Photo: courtesy of RaptorMaps)

About a third of crops are lost to diseases and pests, and while farmhands scout for problems in the field, assessing hundreds of acres is difficult. Now, a team of MIT engineers has equipped flying drones with cameras to better monitor farms. Host Steve Curwood talks with inventor Nikhil Vadhavkar about his project’s potential to increase crop yields and lessen the need for pesticides.

CURWOOD: Another area where drones are already finding a place is on large farms. There they can help monitor the health of crops – without requiring hours of tramping in the fields. Drones can also be used to apply treatments – pesticides where there’s crop damage, or fertilizer where necessary. The idea of farm drones was dreamed up by Nikhil Vadhavkar, the CEO of the MIT startup RaptorMaps, and he explained how they work and how they could help fix a major problem.

VADHAVKAR: So what a lot of people don’t realize is that a third of crops planted are lost to diseases, pests and insects, and to fight this in the US we apply about a billion pounds of pesticides, herbicides and fungicides every single year. So at RaptorMaps we provide the service and analytical tools to enable farmers to accurately pinpoint where to apply these to reduce the total pesticide usage while simultaneously increasing crop yields. So we're enabling the entire system to be more efficient.

CURWOOD: So give me an example of how this might work.

VADHAVKAR: Sure. So right now let's say you're a crop scout for a farmer and your responsibility is to go out every single week and tell the farmer exactly what he or she needs to spray in order to protect the crops. You may only be able to cover a few hundred acres - so an acre is about the size of a football field - you may only be able to cover a few hundred in a day but you're making decisions about several thousand. So you can very easily miss something so we actually pre-scout the fields with our aircraft and enable 100 percent coverage and provide that information to the crop scouts so that they know exactly where the crops are stressed and where they need to apply their expertise when they actually go out to the field.

CURWOOD: So how can you tell if a crop is stressed by looking from a drone?

VADHAVKAR: So this technology was actually developed by NASA in the early days of Earth-observing satellites, so back in the 1970s. And what they noticed was if you look at vegetation in near infrared it actually will reflect quite a bit if the crop is healthy. So leaves have this layer called the mesophyll, and it’s very spongy, and that's what reflects. And when the crop is stressed that layer collapses and it can no longer reflect as much light. So what we do is we take that concept but we can apply it in a much, much higher resolution because we're much closer to the ground. We can fly underneath the cloud layer which actually prevents a lot of farmers from getting data for several weeks at a time and then most importantly we can provide repeat imagery week after week which enables us to monitor how fields are evolving. 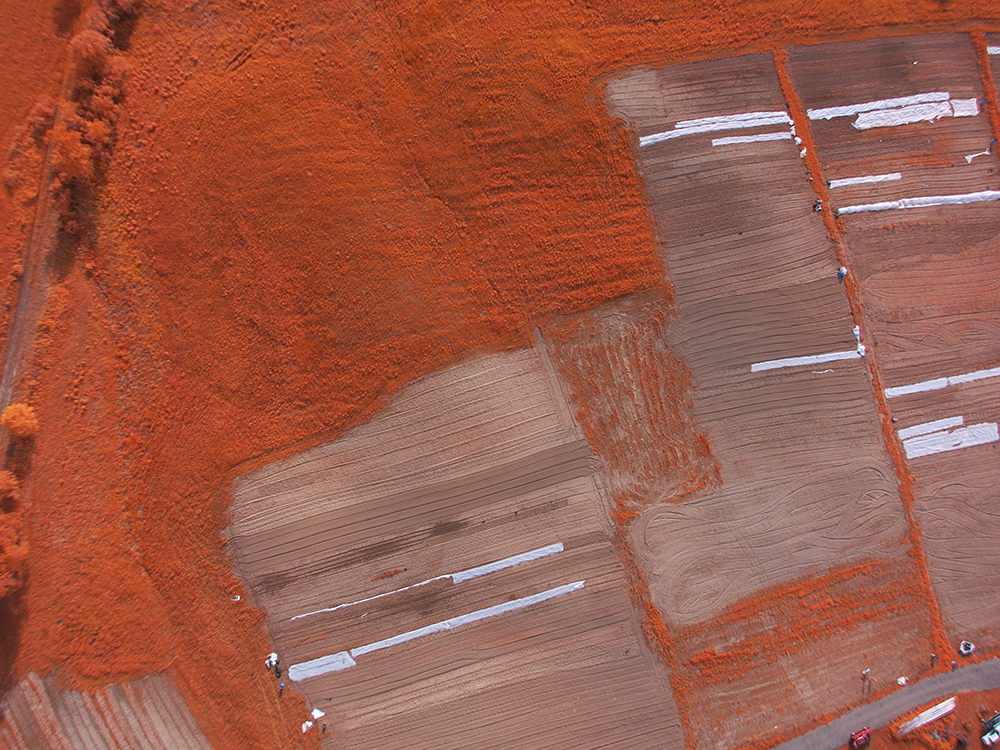 The drones take aerial infrared pictures of farmland. Healthy plants have a mesophyll layer that reflects lots of light, which can be seen from infrared images. Images with little reflected light indicate areas of poor crop health and inform farmers where to spot-treat with fertilizer or pesticide. This way fewer chemicals are used. (Photo: courtesy of RaptorMaps)

CURWOOD: How big are these things?

VADHAVKAR: So drones actually come in a variety of shapes and sizes. The ones we’re using are about seven feet in wingspan so they might actually seem—you know, I'm pretty tall and even if I stretch my arms out I can't quite hit the wing tips, but this is great because it allows us to put really nice imaging systems and allows these drones to stay up in the air for a long time.

CURWOOD: So they have batteries and lots of cameras and all that.

VADHAVKAR: The drones actually have multiple batteries and multiple imaging systems. Depending on the needs of a particular region, you can actually change the configuration, which is what we do.

CURWOOD: Now, how did you develop this crop mapping technology? 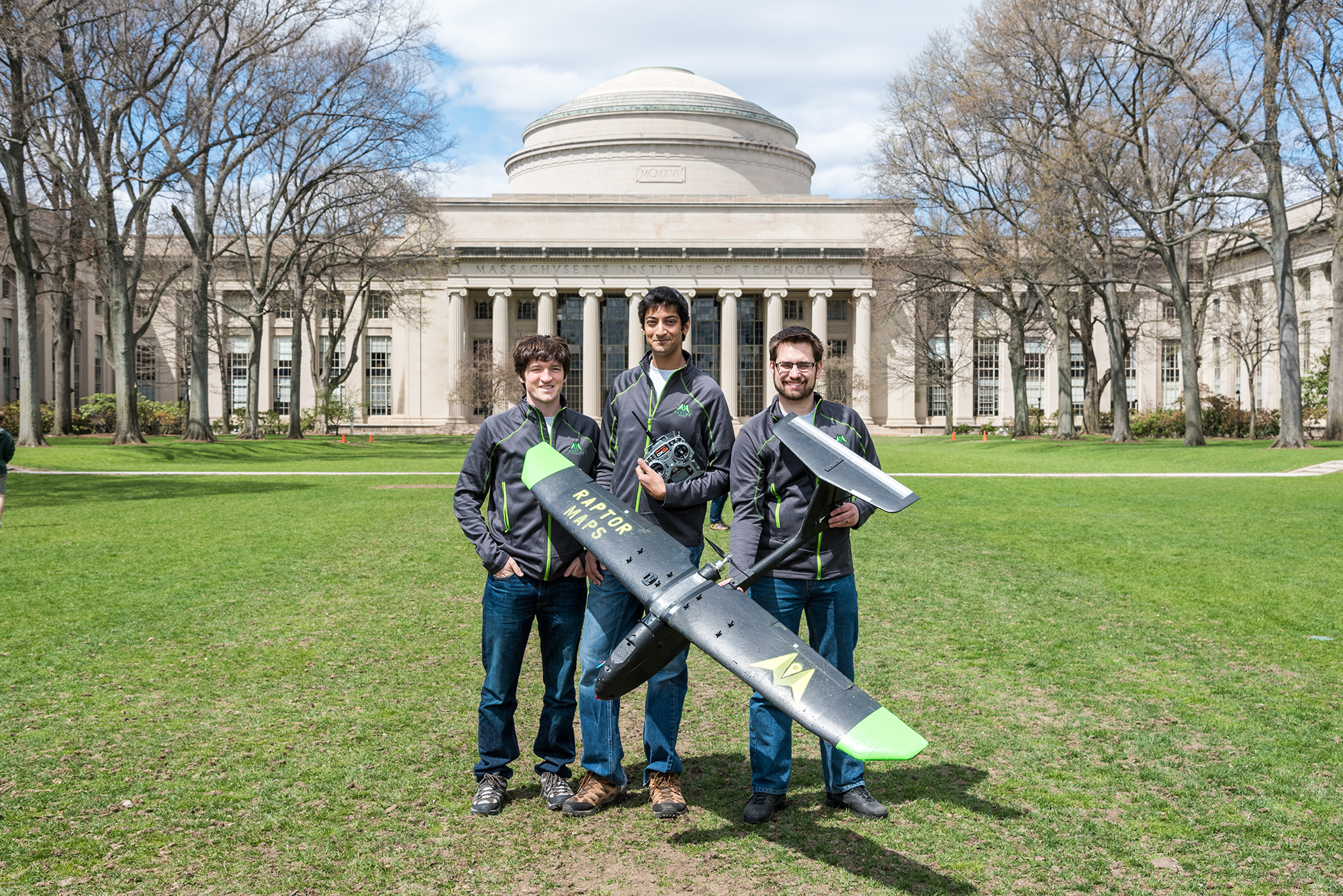 VADHAVKAR: So the idea kind of started when my friend Forrest and I, we actually both work in the Aero/Astro department at MIT and we were out on a NASA...what's called an analog mission. So we were in Idaho and we were simulating what it was like to be on Mars, and we noticed that the maps that we are able to get from satellite data were just not cutting it and so what the NASA folks did is they used drones to get real-time information that they needed to complete their mission, and so we kind of took that idea and ran with it and really saw that, hey, in agriculture this is exactly the application where you need that real-time data. And so, I have a background in drones, I actually led a grant from the Gates foundation to use drones to deliver emergency medical supplies, so we put our heads together and figured out that if we provide both the service and the analytical tools, then we can empower farmers to be much more efficient and preserve their crops.

CURWOOD: Nikhil, how ready do you think farmers are for this mapping technology?

VADHAVKAR: So I think farmers are extremely ready, and it just hasn't been presented in the right way. So what some companies are doing now is they're trying to sell aircraft directly to farmers, but really farmers want the information. So by providing the service and the analyzed data product, we're really de-risking it for them. We're saying, look you can get all the benefits of drone-derived technology which you can get in a way that you're very familiar with, and they've been very responsive to that approach.

CURWOOD: Now, of course, with the changing climate and the expected effects that include drought, flooding, higher temperatures and so forth, how important do you think drone technology is going to be in the future to help farmers feed a growing population?

VADHAVKAR: I think it's going to be extremely important. If you look at the population projections, unless we increase the efficiency of the farmland that we already have, it means we're going to have to create new farmland, and so when you do that you're taking way trees that right now really are helping to keep those carbon dioxide levels low. 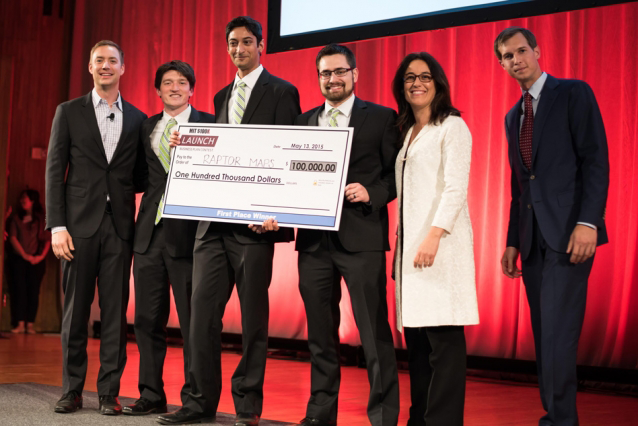 In May, RaptorMaps won MIT’s $100K Entrepreneurship Competition, which celebrated its 25th anniversary. The team plans to use the prize money to take their drone technology to the agricultural market. (Photo: MIT $100K)

CURWOOD: So what's the pushback that you're getting against this drone technology? There's not universal comfort with drones these days.

VADHAVKAR: Yeah, I think one of the biggest things is the privacy issue. People just want to know anytime you have some sort of aerial imaging system, people want to know that you can't spy on them or you're being very responsible with any data you collect, and so this really comes back to engagement of the customers and helping the farmers understand what we're doing. And so privacy is a big aspect and the other kind of push back is just regulatory but it's been great because in the past few months the FAA, they're using the Modernization Reform Act to approve exemptions and they've actually approved about 600 to date, so they really are starting to get on board with the drone technology and the climate is starting to thaw in the United States.

CURWOOD: Nikhil Vadhavkar is the CEO of RaptorMaps. That's an MIT-inspired start-up company based in Cambridge, Massachusetts. Nikhil, thanks for taking the time to talk with us today.

VADHAVKAR: Thank you. It was great to be here.