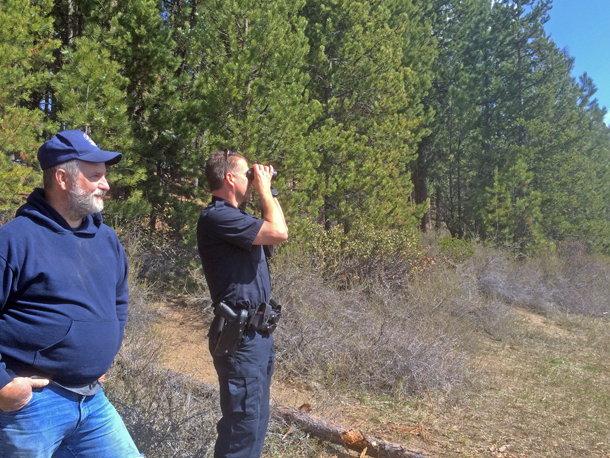 Darin Bean looks through binoculars at Twin Lakes while chatting with La Pine resident and fisherman Larry Archer. Bean cited Archer in the past for shooting a wildlife decoy. (Photo: Tony Schick, OPB/Earthfix)

Wildlife trafficking and crime is a global problem and the Pacific Northwest is not immune. While a small law enforcement and judicial team polices the large territory of Washington and Oregon states for wildlife infractions, limited resources, budget woes and loose laws allow poachers to evade penalties. And as EarthFix's Tony Schick reports, further underfunding and low prioritization of wildlife crime cases threaten to exacerbate the issue further.

CURWOOD: It’s Living on Earth, I’m Steve Curwood. Illegal Wildlife trafficking is a massive problem that’s bringing many species to the brink of extinction – rhinos, for example, or elephants, which are sought for their valuable horns and tusks. But it’s not just a problem in Africa and Asia – here in the US there are also species with horns that are ripe for lucrative poaching. For example, the trophy antlers of the Western mule deer can fetch a thousand dollars or more, and with strict limits on hunting, poachers are often meeting the demand. In Oregon there have been some recent arrests for mule deer poaching, but resources to catch poachers are spread very thin, and penalties aren’t high enough to be much of a deterrent. Still, Fish and Wildlife troopers are doing their best to protect dwindling numbers of mule deer. From Central Oregon Tony Schick from the public media collaborative EarthFix has the story. 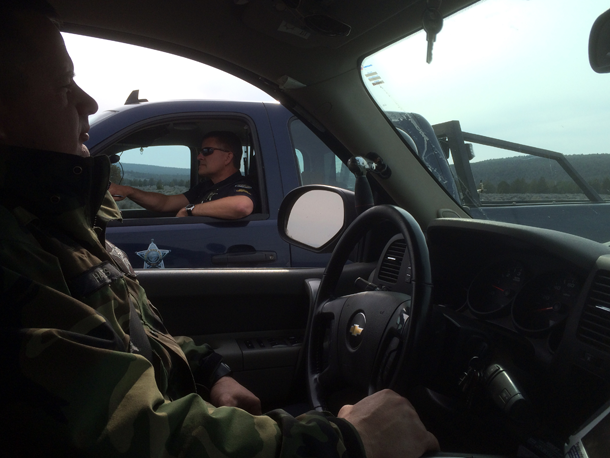 SCHICK: Oregon Fish and Wildlife Trooper Darin Bean is searching a home in the backwoods of La Pine, Oregon.

BEAN: “Boy, there’s a lot of little rooms in this place …”

SCHICK: A few months ago he caught a man here who illegally shot and stashed the carcass of a breeding female mule deer. He’s following up after a missed court date.

BEAN: “This is where they had the deer.”

SCHICK: He peeks around a dark doorway and shines his flashlight into a stained bathtub.

BEAN “You can see there’s still deer blood ... in the spare bathroom, ya know.”

SCHICK: Mule deer have been in sharp decline here, and poaching is one reason why.
It turns out at there are as many deer being killed illegally as there are by law-abiding hunters.
Declining budgets have left Oregon and Washington with fewer Fish and Wildlife troopers than they had in the 1980s. Both states are poised to lose more troopers this year. 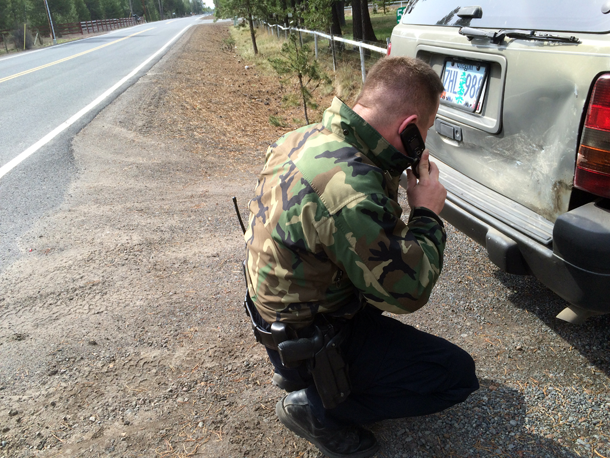 James Hayes examines the damage on a car he suspects was involved in a hit-and-run. Budget cuts in local law enforcement has led to some Fish and Wildlife troopers handling more general law enforcement. (Photo: Tony Schick, OPB/EarthFix)

Bean and his partner James Hayes are the only Fish and Wildlife officers patrolling more than five thousand square miles. And, they have less time to spend finding poachers as they used to. Their workload now includes more general law and time spent on safety checks for boats and ATVs.

BEAN: “Yeah, the days of just solo fish and wildlife are, you know … not anymore.”

SCHICK: On one shift alone, Bean and Hayes handled arsons, hit-and-runs and burglaries.
They still go hard after big poaching cases, and they think Gene Parsons is one of those.

BEAN: “Near as we can tell, that guy killed a tremendous amount of deer.”

SCHICK: They arrested Parsons in January and so far have charged him with 15 counts of violating Fish and Wildlife laws. Months later, he has been indicted but has not yet stood trial. He didn’t return phone calls.

BEAN: “He’d shoot 5-6 deer a night. And he’d cut the antlers off. With a chainsaw. And bring em home, and then a lot of times he would just, as near as we could tell, sell the antlers.”

SCHICK: Where poachers sell remains a mystery to them. But they recently received a tip about an antler dealer. He’s said to be in possession of several thousand dollars worth of stolen horns.
Hayes says if they can connect Parsons or other suspected poachers to this dealer, that could mean additional charges like racketeering. Penalties for poaching alone aren’t always a big deterrent. 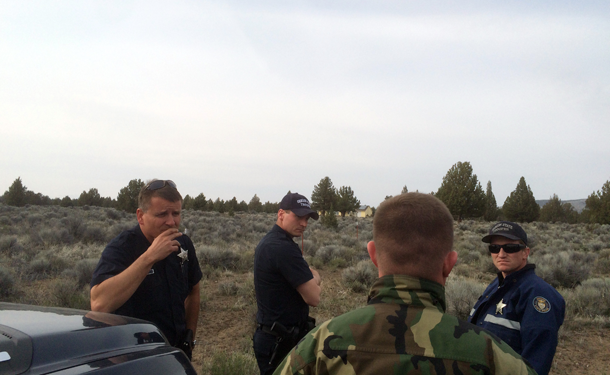 Fish and Wildlife troopers from Bend and La Pine wait outside the property of an antler dealer in Central Oregon. They need his help to track down some stolen antlers and connect suspected poachers to antler sales. (Photo: Tony Schick, OPB/EarthFix)

HAYES: “If there’s no jail time involved and it’s just monetary small fines, they’re not likely to quit … for your real criminals.”

SCHICK: Some Northwest counties prosecute Fish and Wildlife cases aggressively. Others dismiss a high number of cases or reduce them to small fines. Many lack the resources to go hard after poachers.
Just ask Ulys Stapleton, the lone Lake County prosecutor who handles a lot of cases from Bean and Hayes. His jail has 17 beds and he says most are claimed by people in drug-related crimes.

STAPLETON: “I understand why officers may be frustrated, but you don’t have the resources to throw everybody in jail. So what I try to do is I h’em up with a fine.”

SCHICK: The sun is setting on a windy day in Lake County by the time Hayes stops his truck at the antler dealer’s gate. Bean pulls up minutes later, along with troopers from Bend and John Day. They’re also tracking sales from poaching suspects.

HAYES: “Not home. (Second voice repeats, “Not home.”) Gate’s locked — padlocked. Looks like one set of tire tracks came out of there, maybe this morning.”

SCHICK: They meant to come earlier, but Bean was called to a burglar alarm.
They wait outside the property for a few tense minutes. Then the dealer returns a call to one of the Bend troopers.

SCHICK: He’s gone for the evening. The antlers have moved on. His sale records aren’t at the house, either.

RING: “I said, I’m trying to run down some stolen horns, you know where they at? Who do you sell them to? He said ‘I’m running a business and I’m not in the business of telling you where I’m selling my stuff.’”

SCHICK: Out of options, they load up and they roll out. And the hunt goes. I’m Tony Schick in La Pine.

CURWOOD: Tony reports for the public media collaborative, EarthFix, and there are videos at our website, LOE.org.