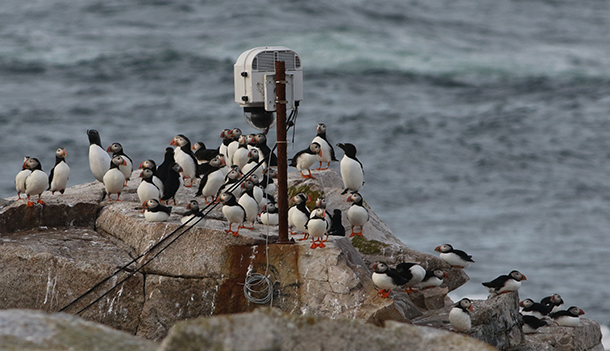 On Seal Island, the daily doings of puffins are streamed live to millions of viewers worldwide. (Photo: Steve Kress)

Each year as wild birds nest, millions of viewers watch via nest cams. From the Seal Island National Wildlife Refuge in Maine there’s a live video stream of puffins raising chicks in an underground burrow, and hanging out on the rocks Host Steve Curwood discusses the cameras with Steve Kress, director of the Audubon Society’s Project Puffin.

CURWOOD: The calls of Guillemots and terns and the splash of ocean wave surround two puffins nesting at the Seal Island National Wildlife Refuge in Maine. You can listen too, and watch, thanks to nest cams. These weatherproof cameras, operated by the National Audubon Society, provide an intimate look into the lives and homes of wild birds. As nesting season gets underway, we called up Steve Kress. He’s director of the National Audubon Seabird Restoration Program known as Project Puffin that he told us about last year. Welcome back to Living on Earth, Steve.

KRESS: Hey, it's my pleasure to be back, Steve.

CURWOOD: So let's start by you telling us a bit about Project Puffins bird cams.

KRESS: The cameras are located on remote Seal Island national wildlife refuge, which is about 18 miles off of Rockland, Maine, and it's a remarkable setting for cams. This island is so remote that you can't really see it from the mainland where you have to go on a boat for hours to get to it. The cams show us the world on Seal Island above ground and underground. And this permits us to get new insight into the lives of seabirds.

CURWOOD: So how many of these cams do you have and how long have they been out there?

KRESS: We've had cams on Seal Island now five years. One of them sits on a remote point of land where the Puffins come in, what we call the Puffin loafing ledge. This is a spot where Puffins come to socialize, just to hang out. We also have a camera underground inside of a Puffin burrow. This camera shows the pair of Puffins, billing, preening, incubating their egg, the moments of hatching, the tender feeding of the check and finally the chick leaving the island by itself.

CURWOOD: So how does the presence of the cameras affect these birds?

KRESS: Well, the camera is a small little box that sits in the back of the burrow and the birds just see it as another rock. We have a team of interns, young biologists that are living on Seal Island and they are in charge of protecting the birds and when necessary they can help adjust the camera. Occasionally, the puffins will send a squirt of guano in the wrong direction and it can hit the camera straight on and then of course we hear about it from other viewers right away. So the interns, it's a good thing they're living not too far away to go out, they can pull the camera out and they can clean it off, pop it back in and then everybody's happy again.

KRESS: Well, the interns are surrounded by bird guano. This is nothing new to them.

CURWOOD: What do you think the public learns from these wildlife cameras?

KRESS: The public is learning about the lives of birds at a level that they had no way of knowing before. Our friends and explore.org not only have given us the grant to do this work, they've also helped us design a citizen science project with this burrow in which viewers can record the feedings that come into the chick and even identify the kinds of fish. And here's another important part about this, Steve, because they're telling us about the forage fish in the area around the nesting islands, and the forage fish are changing because of climate and they're change because of impacts of fisheries and this pair of puffins is telling us all that.

CURWOOD: So how many people are watching these birds do you think?

KRESS: Last year there where over three million viewer pages open. They were viewed all over the world.

CURWOOD: You know sometimes, nest cams can show some pretty harsh realities. There are those chicks that don't make it. Sometimes there are attacks from predators or even parent birds. What kinds of responses have you had on this from the public? 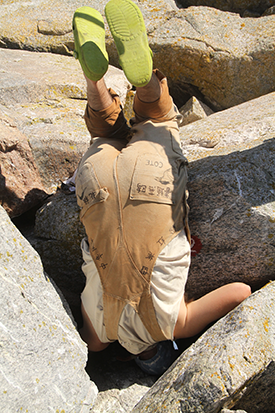 KRESS: Well I think that the cameras give new insight that people have never noticed before and that insight is sometimes surprising, sometimes shocking. For example, last year our Osprey camera — there are two Ospreys named Rachel and Steve — much to our shock a bald eagle came and within seconds snatched the chicks right while people were watching. Some people were very upset, but these things happen whether we are seeing it or not. This is predation. Predation happens so quick and without predation these predatory birds wouldn't be able to live.

CURWOOD: So let's go take a look now at one of these nest cams. What's the URL I should use?

CURWOOD: And I can see the puffin burrow live now, so I'm going to click on that.

CURWOOD: I'm hearing chirping and then I'm seeing the puffin, it looks like he or she could be sitting on an egg. Well, there's a couple of them there.

KRESS: The puffins that bred in this burrow faithfully for the past four years at least apparently did not come back this year. Not sure what happened to them. And there's a new pair in there but as far as I know there's not an egg, yet but any day, we're hoping that there will be an egg and this new pair will live to be the new owners of this burrow.

CURWOOD: How do I tell which one is the girl and which one's the boy?

KRESS: The one with the bigger beak might be the boy. Male and female look very similar. The pair that had been in there for the last several years were named Phoebe and Finn. The names of these birds usually come from the viewers, and they named Phoebe first, and they were convinced that baby was the female and Finn was the male, but when we actually captured them, clearly Phoebe was the guy. 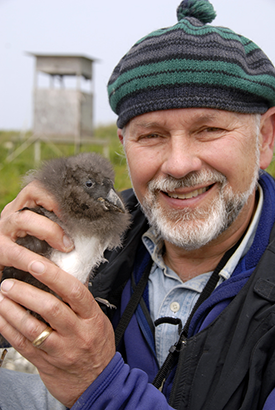 CURWOOD: Now the one by the entrance is giving me the side profile. It's probably a guy you know preening his feathers here. [LAUGHS] How do you decide which habitats, nests and species to put on the camera?

KRESS: Species that have a long breeding cycle are actually preferable, lets us have something of interest to watch for a long time and this pair is going to get us an even longer show I think because we've had this long period of getting to know each other and getting comfortable in the burrow and they haven't even laid the egg yet. We've got three months after the egg is late. Six weeks to incubate that egg and other six weeks to raise the chick. That burrow is just going to be so informative to people.

CURWOOD: Steve, please tell me about your favorite bird or pair of birds.

CURWOOD: Steve, before you go, the Cornell Laboratory of Ornithology where you teach, and of course, the Audubon Society operate these cameras in wildlife sanctuaries in a variety of places. So what other nest cams should we be tuning into?

KRESS: Explore has a whole range of them. They're all spread out on that one homepage. The Lab of Ornithology has its own set of cameras inside of the nest boxes. The famous one is for Red-tailed Hawks in Ithaca, but they have an Albatross cam in Hawaii and many other cams. So that's another site on the all about birds website.

CURWOOD: Steve Kress is director of the Audubon Society's seabird restoration program otherwise known as Project puffin thanks Dave for taking the time us today.

More bird cams through the Cornell Lab of Ornithology