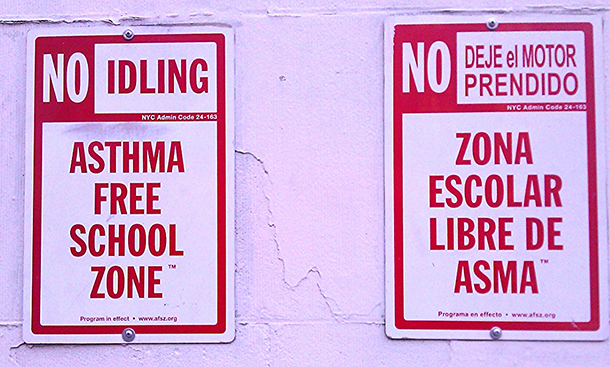 A sign on a school in Manhattan attempts to limit air pollution from idling cars near a school. A new study from Sweden suggests risk of asthma is not the only consequence of air pollution exposure in childhood; there are also apparently mental health risks. (Photo: Mike Licht, Flickr CC BY 2.0)

The link between air pollution and respiratory illnesses like asthma is familiar, but new research from Sweden suggests that air pollution could also impact our mental health. Host Steve Curwood speaks with Anna Oudin of Umea University in Sweden about her study and how this changes our thoughts about air pollution.

CURWOOD: From the Jennifer and Ted Stanley studios at the University of Massachusetts Boston and PRI, this is Living on Earth. I’m Steve Curwood. A breakthrough study from Sweden has found air pollution is linked to mental disorders in young people. For years, science has known that pollution from smokestacks and exhaust pipes can promote diseases, including heart disease and asthma. But now by cross-referencing pollution exposure and psychiatric medication records of children and adolescents in Sweden, researchers say bad air appears to be bad for mental health. Joining us to discuss the study is a lead author Anna Oudin. She’s a researcher at Umea University in Sweden.
Thanks for joining us, Anna.

OUDIN: Thank you so much for inviting me.

CURWOOD: So tell me, how did your study work? You sampled, well, a pretty large population of people...I think it's, what, half a million or so. 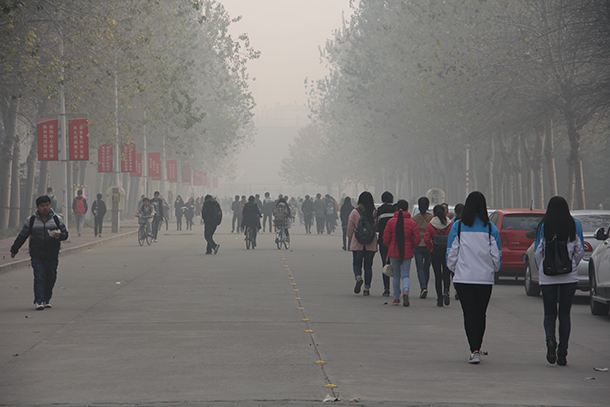 OUDIN: Yes it is. As researchers we're a bit lucky in the Scandinavian countries because we have these nationwide covering registries, for example, the register I used is the registry of dispensed medications, which covers everyone living in Sweden, or at least everyone registered as living in Sweden, and every time anyone dispenses medication it's recorded there. So we used that registry and we combined that with the registry of where people live, and we combined that with the model of air pollution that is a national model in order to look at air pollution and dispensed medications for psychiatric disorders in children and adolescents.

CURWOOD: So, what kind of pollutants are we talking about and how common are these?

OUDIN: Well we looked at NO2 PM 10 and PM 2.5. And NO2 is usually seen, at least in our country, as a marker for vehicle exhaust and PM 10, which represents particles, which can come from many different sources. So, I would that it is basically say from traffic.

CURWOOD: And what did you find here in your study?

OUDIN: We saw that children who live in polluted areas were more likely to have a dispensed medication for a group of psychiatric illnesses. We saw that for an increase of 10 micrograms per cubic meter in NO2, the risk of dispensing one of these medications increased with nine percent if you look at the overall estimate. We looked at this in four different regions, but overall it was nine percent. It's comparable to what we've see for cardiovascular disease risk increase.

CURWOOD: So what you're saying is it's not causal but there is definitely some sort of correlation, a link between levels of air pollution and the amounts of psychiatric medications that are being dispensed in those populations.

OUDIN: Yes, in our population, we saw that clear link. We can never know for sure that it's causal but there was definitely an association.

CURWOOD: And this association goes down to actually very low pollution levels as I understand.

OUDIN: Yes, we looked at both in rural areas and urban areas, and we saw the same association basically everywhere, independent of how we looked or what we adjusted for. We've done our best to rule out any other factor but we can never be entirely sure, of course.

CURWOOD: So, specifically what are the kinds of mental health disorders were you looking at in relation to the solution?

OUDIN: Yeah it was medications in a broad group of medications for psychiatric disorders, and it ranges from very mild symptoms, for example, sleeping disorders or sedative medicines to antipsychotic medications, so it's very broad and we can't separate these from each other based on the data we have. So we can't say if it's a certain medication that drives the association or if it's all the medications so that's what we want to do next, of course, to apply more detailed data from the medications.

CURWOOD: So, you could perhaps show links between the air pollution exposure in depression or anxiety or autism or psychosis that sort of thing on a very specific basis but not yet. 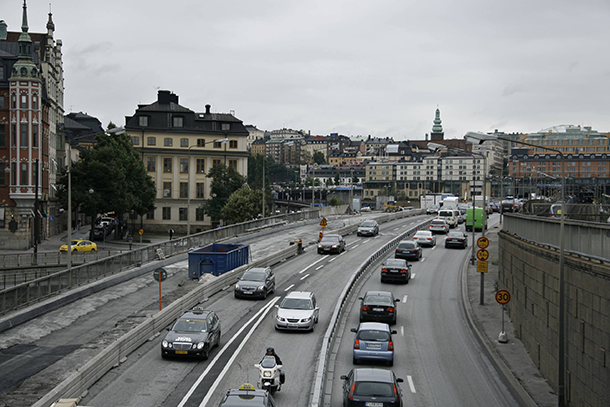 Cities in Sweden have relatively low levels of pollution compared to other parts of the world, but pollution there is still correlated with childhood mental health disorders (Photo: Andrea Paraggio, Flickr CC BY-NC-ND 2.0)

CURWOOD: Your research is really intriguing because typically looking at psychiatric disorders of people, they think about genetics, they think about what might be going on socially, in family is there trauma, and now your research would indicate that we should also look to environmental factors.

OUDIN: Yes, I think that when you see these results in other studies that it could definitely probably influence how we look at mental illness, that the environmental could play an important role. Maybe the awareness of the environmental factors could help reduce stigma, for example. I'm not sure, but hopefully.

CURWOOD: How do you think your work changes the way we might be thinking about regulating air pollution?

OUDIN: I think that, I mean, when regulators and policy makers think about this, they usually take into account the health risks of air pollution and weigh it against the costs of reducing air pollution but these kinds of health issues are not included in those cost calculations. We know that air pollution can get into the brain and cause inflammation and that psychiatric disorders can be caused by inflammation, so I think there is a need for large epidemiological studies, and I think there will be more to come in the next few years.

CURWOOD: Anna Oudin is a researcher at Umea University in Sweden. Thank you for taking the time with us today, Anna.

OUDIN: Thank you so much.