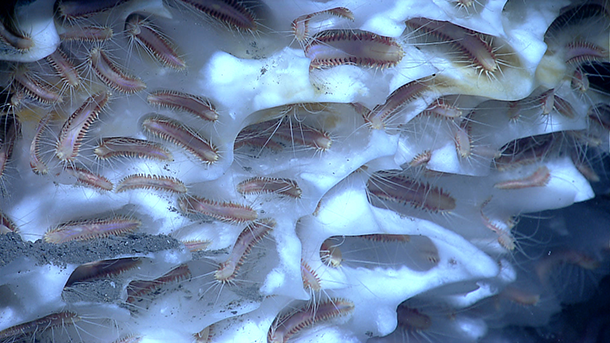 Methane ice worms inhabit a white methane hydrate. The frozen methane deposits on the ocean floor could be a source of energy, but NRDC says developing this potential resource would open a dangerous can of worms for the climate. (Photo: NOAA Okeanos Explorer Program, Gulf of Mexico 2012 Expedition, Flickr CC BY 2.0)

A coalition of environmental organizations that lobbied Congress for years to reform current energy policies now expresses misgivings about a recently passed Senate bill. The Natural Resources Defense Council’s Marc Boom tells host Steve Curwood why he sees provisions like expanding biomass and exploring methane hydrates as steps in the wrong direction. The NRDC endorses some provisions in the bill including measures to expand energy efficiency and protect public lands, but Boom says that on balance the bill could do more harm than good.

CURWOOD: It’s Living on Earth, I’m Steve Curwood. A bipartisan majority of 85-12 in the US Senate has approved a broad energy reform bill that includes funding for clean energy research and conservation. The House has already passed its version, and assuming both chambers can iron out their differences in conference committee, America is poised to get its first major energy legislation in almost a decade. But a coalition of environmental groups that includes the Sierra Club, the League of Conservation Voters and the Natural Resources Defense Council says what’s on offer is a mix of good and bad. Marc Boom of the NRDC joins us now. Marc, welcome to Living on Earth.

BOOM: Thanks, Steve. Great to be here.

CURWOOD: So, there's good news and there's bad news in this bill. Let's talk about, Mark, what in your view was not so great about this from an ecological standpoint.

BOOM: Sure, so there's lots of celebrating on Capitol Hill right now because this was a bipartisan bill and the first energy bill to get through the Senate since 2007, and while there's lots of good provisions on energy efficiency and renewable energy and land conservation, unfortunately, there are some provisions that were added to the bill that are going to undermine our progress on climate change and harm other environmental protections.

CURWOOD: Alright, so let's break those down. So what are the harms for climate change?

BOOM: I think the first thing that I want to talk about is this provision that was added which would define biomass as carbon neutral. The latest science shows that forest biomass is definitely not carbon neutral especially in the time periods that we need it to be in order to address climate change.

CURWOOD: Well, the conventional wisdom is, “look, you burn a tree but you plant a tree.” So, what's the problem?

BOOM: It is sounds great, but when you really get into the science you seeing that in order to make sure that you regrow the trees, there's a lot that needs to happen and in the meantime all of that carbon is up in the atmosphere heating up the climate, and so the trees might regrow in decades or potentially a century. That's way too long for what we need to do to act on climate change. 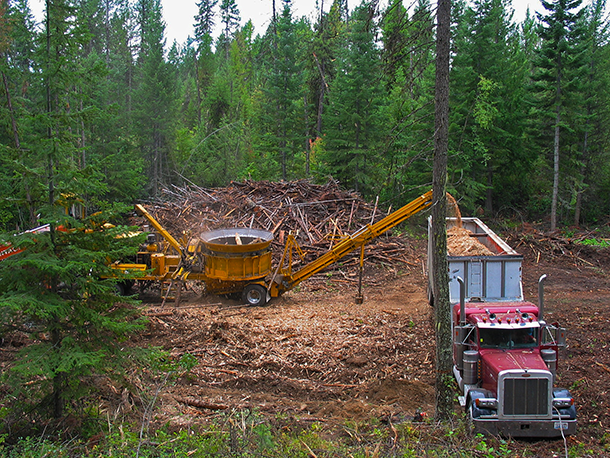 Biomass would be recognized as “carbon-neutral” under a provision in the bill, and Marc Boom says that ignores the fact that carbon dioxide released from biomass energy production may take decades to be re-absorbed by growing trees. (Photo: Bureau of Land Management Oregon and Washington, Flickr CC BY 2.0)

It's also problematic because this is an example of Congress usurping the role of EPA and of scientists who have the authority to develop methods for determining how carbon intensive a certain fuel is. Congress just declaring it goes around that process and is going to create real problems in the future. And one of those could be that when states are developing their plans to comply with the Clean Power Plan, they might rely more on forest biomass than sources such as solar and wind which are much cleaner.

CURWOOD: What are some of the other provisions of this bill that you think are less helpful for climate protection?

BOOM: So, there's a provision that would allow new research and development into methane hydrates, basically, like frozen natural gas that is located under permafrost and on the sea floor, and the latest science shows that there is probably more methane hydrates than all the current known fossil fuels that we have. So the fact that the bill is spending $175 million to help commercial interests develop drilling and extraction technology to harvest this is very problematic. We need to be moving away from fossil fuels, not unlocking new sources of it.

CURWOOD: What concerns do you have about the hydrates? I've heard that some say that you know that they're just barely below freezing down there, there is quite a bit of methane there and poking around at them might result in the so-called methane "burp" and then might and releasing huge amounts of the methane. To what extent are you concerned about that?

BOOM: That's definitely one of the concerns. They haven't developed the technology to efficiently extract it, so it's not clear how they do that without destabilizing these formations and allowing that methane as it depressurizes to rise into the atmosphere. As you and I both know, methane is a very potent greenhouse gas, especially in the short term, so unlocking these could definitely release methane into the atmosphere. It also has the potential to destabilize the sea floor, and that is very detrimental to the marine environment. Furthermore, just to find where these hydrate deposits are, they need to use acoustic seismic surveying and that includes the use of high-pressure air guns that when they go off can be heard over hundreds of square miles and damage marine mammals like whales and dolphins and also disrupt commercial fisheries. 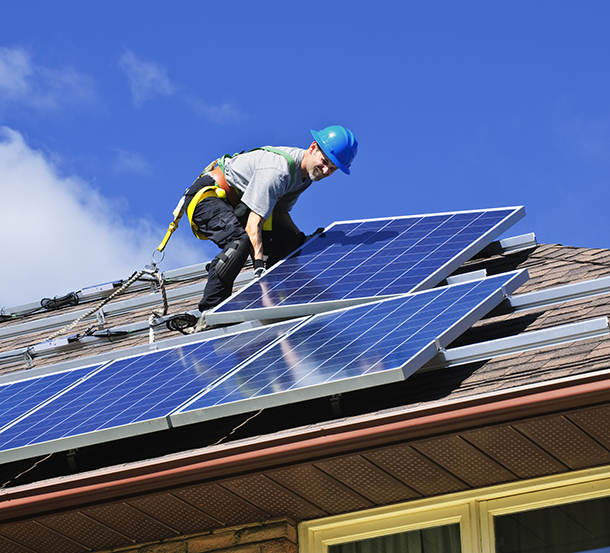 CURWOOD: So, it sounds like you think this methane hydrate provision is a lot of bad news. What are some of the other provisions of the bill that you don't particularly like?

BOOM: Well, there's provisions in the bill that speed up the environmental review on mining and gas and oil drilling and on reviewing liquid natural gas export facilities. Fundamentally rethink that these types of reviews need to be done right and setting an artificial deadline on when they should be completed leaves lots of questions unresolved and could end up with new infrastructure that harms communities and the environment and those committees might not know what those impacts will be.

CURWOOD: So, talk to me about what you see as good incentives in the bill from an ecological standpoint.

BOOM: I mean the bill is built around a really solid core of expanding energy efficiency and renewable energy, great innovation and land conservation. It really builds upon this piece of legislation known locally as the Shaheen-Portman energy efficiency bill from Senator Shaheen from New Hampshire, a Democrat, and Senate Portman from Ohio, a Republican. This has been a bill that has been around for several years, almost passed many times, but every time it came up before it was really a lightning rod to attract really troubling anti-environmental provisions. It promotes energy efficiency in buildings, in manufacturing facilities and in the federal government. Kind of low hanging fruit, but you know those are sectors that account for a large amount of our carbon emission, so it's really critical that we make it easy for them to adopt energy efficiency.

There's also provisions on renewable energy. It expands research into marine hydrokinetic and geothermal which are both sources that are largely untapped and could provide some of the baseload power that we need from clean renewables. There's a lot of money that goes into grid innovation. This is going to make it easier to put wind and solar onto the grid and make sure that we can also integrate more storage which increases how effective that wind and solar will be when it's on the grid. 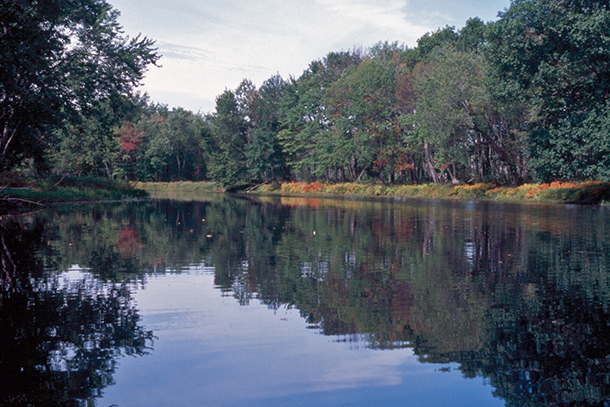 The Senate energy bill includes a measure to permanently reauthorize the Land and Water Conservation Fund, which has conserved many key habitats, including 88 percent of the Sunkhaze Unit in Maine’s Sunkhaze Meadows National Wildlife Refuge. (Photo: U.S. Fish and Wildlife Service Northeast Region, Flickr CC BY 2.0)

CURWOOD: So, what you're saying here, Marc, there's good, there's bad, there's even ugly. On balance, you folks in the business of advocacy, if this would hit the President's desk what would you say?

BOOM: Well, if the bill went to the desk as it is right now, we don't support that. We really feel that the biomass provision and methane hydrates, environmental reviews being sped up, a couple other provisions like delaying important efficiency standards for furnaces...those need to be resolved because on balance right now it could do more harm than good.

CURWOOD: So, the Senate, of course, is one of two houses there in the Congress and the House already passed its own energy bill late last year. What needs to happen to reconcile these two versions in committee so that there would be something that would be offered to the president to sign?

BOOM: Well, that's going to be an interesting process. The bills are pretty far apart. The house bill didn't have much bipartisan support - I think only nine Democrats supported it, and really is going the opposite direction in that it reverses our progress on energy efficiency, it doubles down on integrating fossil fuels into our electricity grid and has far more damaging provisions on environmental reviews and things like that. 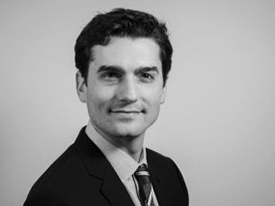 One sticking point that I see coming up actually is that the Senate bill includes a really great provision that I didn't get to mention before where it permanently reauthorizes the land and water conservation fund which is one of our most successful conservation programs in the nation. It also includes a new fund to help fix the maintenance backlog at our national parks. The house bill doesn't have these provisions and in fact the chair of the House Natural Resources committee, Representative Bishop from Utah has major concerns with the program and wants to see major changes before going forward. So it's hard to see how that gets reconciled.

CURWOOD: Marc Boom is the Associate Director of Government Affairs at the Natural Resources Defense Council. Marc, thanks so much for speaking with us today.

BOOM: Thanks, Steve, for giving us an opportunity to talk about this.

Letter of concerns about the bill, signed by 10 environmental organizations