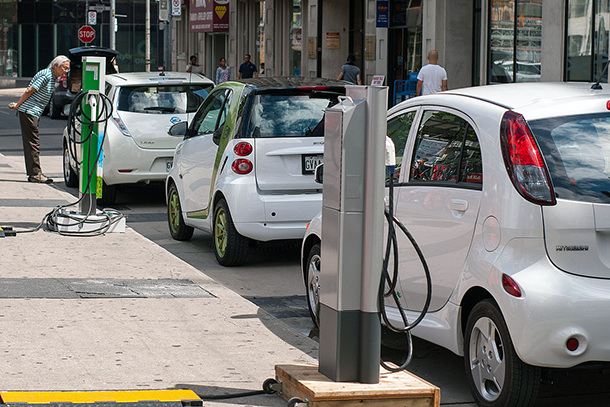 From farthest to closest, a Nissan Leaf, a Smart ED, and a Mitsubishi i MiEV. Currently, there are about 400,000 electric vehicles on US roads today. (Photo: Mariordo, Wikimedia Commons CC BY-SA 2.0)

In this week’s trip beyond the headlines, Peter Dykstra tells host Steve Curwood that President Obama’s ambitious goal for electric vehicles has fallen short but a non-profit that tracks environmental crimes and accidents from the skies is a great success. Also, we mark the anniversary of the Ramsar Convention, an international agreement to protect wetlands.

CURWOOD: Let’s delve beyond the headlines now with Peter Dykstra of the DailyClimate dot org and Environmental Health News – that’s EHN.org. He’s on the line now from Conyers, Georgia. How’s it going Peter?

DYKSTRA: Hi, Steve. You know, the Detroit Auto Show happens every January and it’s kind of a place for big dreams, but this year, there was a big dream that got deflated.

CURWOOD: Oh? What was that?

DYKSTRA: Well, back in the 2008 presidential campaign, candidate Barack Obama set a goal of a million electric vehicles on US roads by 2015. They sorta walked that goal back in 2013, and then this year it went completely flat.

CURWOOD: Did you buy one?

DYKSTRA: No, I didn’t buy one, and less than half the people to meet that million-car-goal bought them either. There were only 400-thousand on the road as of 2015.

DYKSTRA: Well, several things: battery technology in electric vehicles is not as far along as some people had hoped. The costs for those batteries and the cars are too high, and of course we have those low, low gas prices. When Obama made that promise as a candidate back in 2008, gas prices were 4 bucks a gallon; now they’re less than half that.

CURWOOD: Yeah, you’re right. I can get it for a buck-59 in my neighborhood. Hey, what else do you have for us today?

DYKSTRA: Well, let’s call this next one “CSI Environment.” There were some fun developments in tracking pollution and environmental crime from satellites.

CURWOOD: Ah, the Big Tree-hugger is watching you…

DYKSTRA: Well, not so much a big tree-hugger; it’s a little nonprofit called SkyTruth. They’re leading the way and teaming with some big outfits like Google and others, with satellite data and images to track fracking sites, oil spills, illegal logging, illegal mining, water theft and particularly illegal fishing in our oceans.

CURWOOD: So, what are the big collars these eco-cops have made?

DYKSTRA: They’ve had a few. The SkyTruth folks set out scouring publicly available images for oil spills and other accidents. Back in 2009, they found a huge spill off Australia. Then, they helped reveal the next year how big the Deepwater Horizon oil spill was in the Gulf of Mexico.

CURWOOD: And that’s a pretty big ocean out there.

DYKSTRA: Yeah, until recently, Palau only had one boat to patrol an ocean area the size of Texas. Can you imagine Texas only having one police car? That eye in the sky is welcome help for a place like Palau. Remember, we’re talking about a small, tiny nonprofit and the tiny island nation leading the way on this. If larger countries—maybe even the ones that are doing the illegal logging or fishing—get involved, it’s a potential game-changer.

CURWOOD: So, what do you have for us today from history? 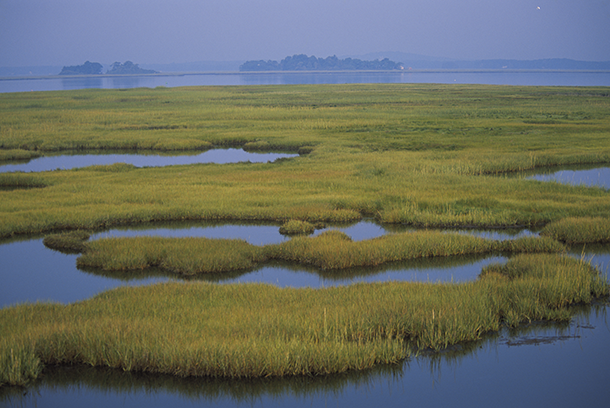 DYKSTRA: It’s one of those obscure international treaties turning 45 years old this week, the Ramsar Convention on Wetlands. It’s named that because it was adopted in Ramsar, Iran in 1971. It helps nations identify and protect their vital wetlands. There are over 2,000 wetlands listed in Ramsar for their ecological and commercial value, and169 nations that have signed on.

CURWOOD: So, what kind of teeth does this deal have?

DYKSTRA: Well, there’s almost no such thing as an ironclad international, environmental agreement, but Ramsar gives some leverage in protecting places in the US like the Chesapeake Bay and Delaware Bay or floodplains and freshwater wetlands in the Upper Mississippi. Internationally, you’ve got places like Vietnam’s Mekong delta or the Okavango in southern Africa. The threats to wetlands are still huge, but even wetlands need street cred, and the Ramsar Convention helps, so happy 45th birthday.

DYKSTRA: Alright, Steve, thanks a lot. We’ll talk to you soon.

CURWOOD: And there’s more on these stories at LOE.org.


U.S. may not hit one million electric vehicles until 2020

SkyTruth helps crack down on illegal fishing in Palau