Zika’s Emergence in a Changing Climate 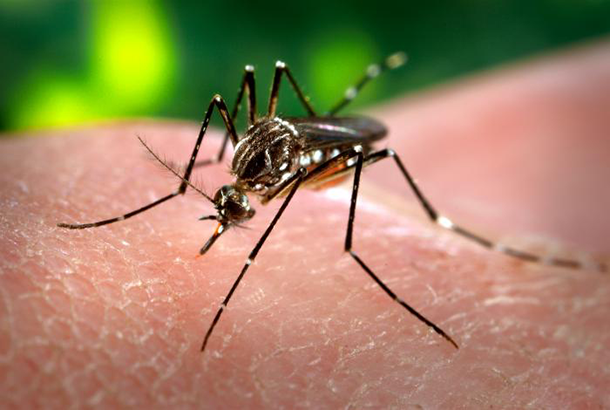 An emerging Zika epidemic and its association with a worrisome birth defect has pushed a formerly obscure infection into the spotlight. Along with other vector-borne diseases such as dengue and West Nile, climate change is probably accelerating the spread of Zika, as mosquitoes also spread to new areas. Dr. Kamran Khan, an infectious disease physician, tells host Steve Curwood about growing global public health concerns and how the virus might be controlled.

CURWOOD: From the Jennifer and Ted Stanley studios at the University of Massachusetts Boston and PRI, this is Living on Earth. I’m Steve Curwood. The changing climate and growth of international travel is making it easier for infectious diseases carried by insects to find new victims. We’ve seen dengue fever, the West Nile virus and the hanta virus spread and now it seems we need to brace for the mosquito-borne Zika virus, which is linked to a devastating birth defect. At least 18 cases have been reported in the United States, mostly among travelers, although there are locally transmitted cases in Puerto Rico. The Centers for Disease Control advised pregnant women to avoid the 24 countries where Zika is widespread. For more information and advice we reached out to Dr. Kamran Khan at the University of Toronto, who recently published a paper on Zika in the Lancet. Welcome to Living on Earth, Dr. Khan.

KHAN: Thank you, it's great to be here.

CURWOOD: Doctor Khan, Zika has been around humans are more than 50 years, so why is it suddenly capturing our attention?

KHAN: Well, you're right. Zika virus was first identified in Uganda in 1947. It's actually named after the Zika forest there, and it's been causing sporadic cases over the last 50 years or so. In 2007, it found its way into the island of Yap in Micronesia, caused a bit of an epidemic there, and it's been island hopping to French Polynesia to Easter Island and now more recently into Brazil. We're hearing about it because it's found a really hospitable environment in Brazil. 200 million people with essentially no immunity to this virus, the mosquito that is efficient at transmitting it, the Aedes aegypti mosquito, and the suitable climate, so it's all the makings of an epidemic. 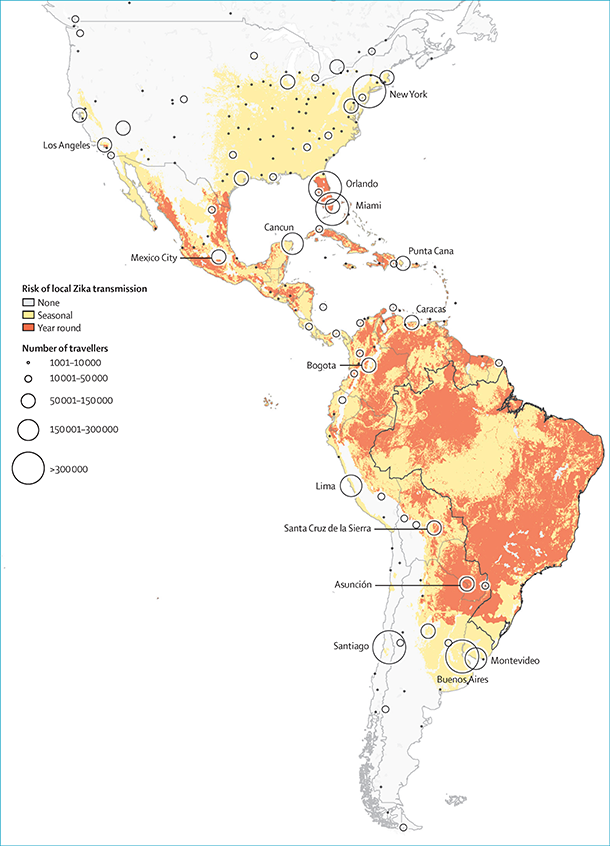 CURWOOD: Now, how long and why have you studied the Zika virus?

KHAN: I first became aware of Zika in May of 2015 when it first showed up in Brazil and started to work with several of our colleagues at Oxford that actually spent a lot of time studying the Aedes mosquito and its ability to transmit viruses, and our work here in Toronto on understanding how people work and travel around the world. We essentially put our skills sets together trying to anticipate and model how this disease would spread across the region.

CURWOOD: Tell me specifically about what you published in the Lancet? How might the Zika virus spread outside of South America?

KHAN: We first took a look at how people are traveling out of Brazil, and this is important because if an individual is bitten by a mosquito that carries the Zika virus, they can board a plane and go to another part of the world that has the Aedes mosquito that can transmit the virus and infect that mosquito if the mosquito bites them. That mosquito can then propagate the infection and take it on others. So what we did was we looked at the movements of travelers out of Brazil because we knew that this virus was widespread in the region, and we coupled that with information on where Aedes mosquitos are across the Americas and where the climate is suitable for it to be transmitted to humans. The US has a large footprint in terms of travelers around the globe, so we're very likely to see and are already seeing travelers who are already infected with the virus returning to the United States. That's very different than individuals who haven't left the United States who become infected by mosquitoes in the US. Now, our research suggested that some areas of Florida, the Gulf coast, parts of southern Texas, the environment there is suitable and the mosquito is present for possible local transmission of Zika virus. I don't anticipate in the US they would be the types of explosive epidemics we're seeing in other parts of Latin America. Climate isn't the only factor, but the conditions are there and conducive to that. 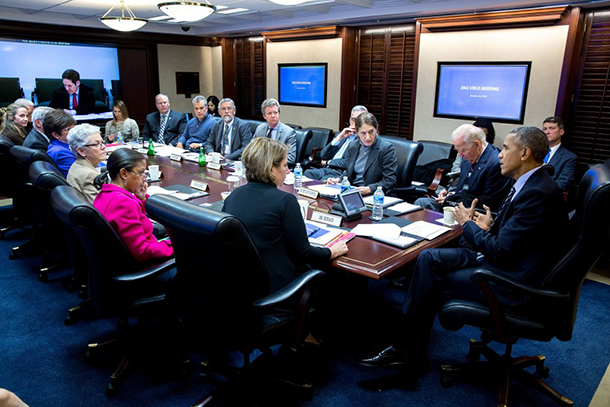 President Obama met with his national security and health teams on the spread of the Zika virus on Tuesday, Jan. 26th. (Photo: Official White House Photo by Pete Souza)

CURWOOD: Now, the public is really engaged with this because of...well, it sounds like a horror story that you get this disease, a woman who gets this disease during pregnancy, her baby could be born with a smaller brain, microcephaly. So what's the relationship between Zika and this rise in microcephaly?

KHAN: We know with other viruses, Rubella is one that was known to also cause microcephaly and congenital defects in newborns.

KHAN: Correct. So Rubella is a condition which individuals can pass this virus onto their unborn child, which can cause microcephaly and other types of birth effects. At this point time there is growing evidence that the Zika virus is associated with microcephaly. The first bit of evidence really came from this epidemiological link, meaning that we were seeing a dramatic rise in microcephaly cases in parts of Brazil, especially in the northeast where the Zika virus was most active going from about 150 cases a year to well over 3,500 cases. I think the most compelling evidence has been that the Zika virus has been identified in the brains of newborns who died shortly after birth and had microcephaly, as well as in the placentas of some women who miscarried and had stillborns with microcephaly. We still don't know for certain whether Zika is the primary cause or a contributing factor and this is why there is an ongoing investigation to better delineate what the risk is.

CURWOOD: What do you think of the advice to people in these regions to not get pregnant at this point until this is figured out?

KHAN: I think it's a sign just of the desperation in the situation. I mean, when in history have we heard of a policy of "don't get pregnant", but I think it's also important to keep in mind that there's no vaccine on the immediate horizon and there's no effective anti-viral treatment, and this is a day biting mosquito predominantly. So you can just imagine individuals living in a very warm tropical climate and really their only measure to prevent mosquito bites would be to cover up, to be applying mosquito repellant very frequently and we know that that's not even 100 percent effective.

CURWOOD: What might work to combat the spread of this disease or the mosquitoes that carry it?

KHAN: Controlling mosquito populations, eliminating some of the breeding sites, but there have been some more novel interventions proposed. Some organizations are trying to engineer mosquitos that could be released into the wild and if they mate they could result in offspring that are not viable. Essentially the mosquito populations would start to diminish. There is another approach that's been used with Dengue which is a related virus where the mosquito is infected with a bacterium called Wolbachia and in that instance the bacterium seems to actually disrupt the ability for the mosquito to transmit the Dengue virus to humans. These are in consideration. It is important to keep in mind they not going to address the problem in a span of weeks or months for instance. 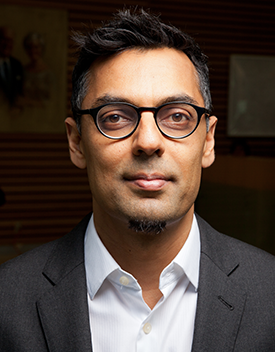 Dr. Kamran Khan is an infectious disease physician at St. Michael’s Hospital in Toronto and a professor at the University of Toronto. (Photo: courtesy of Dr. Kamran Khan)

CURWOOD: To what extent is this outbreak related to our disrupting climate, that things are getting warmer, and places where mosquitoes can flourish, are expanding or moving?

CURWOOD: Dr. Kamran Khan is an infectious disease physician at St. Michael's Hospital in Toronto and teaches at the University of Toronto Medical School and School for Public Health. Thanks for taking the time today, doctor.

Zika virus: Outbreak 'likely to spread across Americas' says WHO

More about Zika Virus, symptoms, diagnosis and treatment via CDC