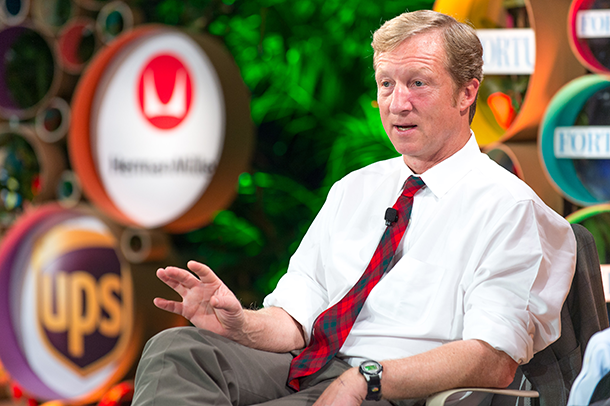 Tom Steyer is co-founder of Next Generation. His group that promotes solutions to two of the biggest challenges confronting the next generation of Americans: The risk of dangerous climate change, and the threat of diminished prospects for children and families. (Photo: Fortune Live Media, Flickr CC BY-NC-ND 2.0)

During the December 2015 climate summit in Paris, nearly 200 countries have effectively pledged to phase out fossil fuels by 2050 to help curb global warming. Host Steve Curwood and green financier Tom Steyer discuss the economics of this transition, including how California’s carbon pricing system is creating jobs and growth, and what could work in developing countries like India.

CURWOOD: It's Living on Earth, I'm Steve Curwood. One thing that wasn't in the State of the Union address was any talk of putting a price on carbon. But even if a federal carbon tax feels a long way off, states including California have begun to move ahead with cap and trade efforts that do put a price on global warming pollution. While we were in Paris at the historic climate summit, we caught up with investor and philanthropist Tom Steyer, who’s pledged a sizeable amount of his considerable fortune to environmental causes. And he says carbon-pricing efforts like California's are exactly what we need around the world to address the grave threats of climate disruption.

STEYER: When we think about carbon trading and the cap and trade system in California, we can say first of all, that it's happening, that it's going to raise up to $2.5 billion dollars this year for the state and, at the same time, we've been leading the country in terms of moving to a clean energy economy at the same time that we've been growing faster than the rest of the United States. So when we think about that policy and how it has impacted us, we can see that actually moving to a clean energy economy is part of the reason that California's been growing faster and producing jobs faster.

CURWOOD: Do you have some numbers? I mean, how much has reducing carbon helped California's economy?

STEYER: One of the ways that we think that energy really impacts us is in terms of jobs. I think there has been a false argument against moving to a clean energy economy which is that if you do so it will be a job killer. Actually, what we're seeing is that A: by the end of this year, we expect that they will be up to 500,000 Californians employed in clean energy jobs and in addition, we've just done a study in the last five months that shows that nationwide, if we accelerate the move to a clean energy economy, it will produce a net additional million jobs by 2030. So in fact the argument that moving to clean energy is a job killer is false. Not only does it create net new jobs it also reduces energy costs across society and makes people's take home pay be higher. So actually what we're seeing in California is something we expect to happen across the United States as it adopts clean energy.

CURWOOD: Politically, President Obama came here, a lot of enthusiasm, making a number of pledges, wants to move the US forward. At the same time, we have the Republican congress, which as a whole is fairly tentative if not skeptical about dealing with climate disruption. How can the U.S. move forward at this time? 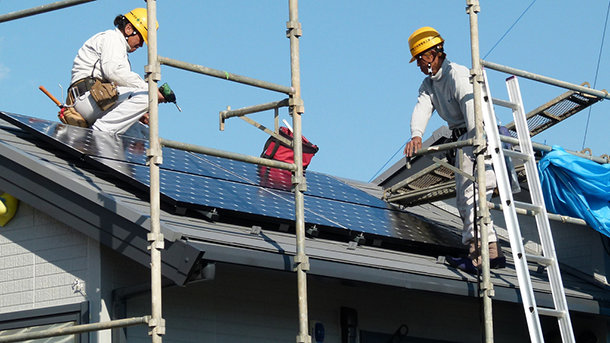 Solar has become some of the cheapest energy in California, and job growth from renewables in the state has overtaken that from fossil fuels. (Photo: Solar PV and system installation, Flickr CC BY-SA 2.0)

STEYER: Well, we are huge believers in democracy, and that means the people of the United States, not just the elected officials of the United States. And what we've seen over the last six months is an incredible move across the board for Americans regardless of political party to accept the idea that clean energy is the future and that we should move faster towards it and the idea that doing so will prevent climate change. So that means we've seen a 12 percent move by Republicans in the last six months, which is unheard of. So really what we think what has to happen is we think Americans, citizens, voters, have to decide both that they agree with us that advanced energy is the future which they do and that it is important, and when they tell people that are running for office that they insist that this happens, it will happen because people running for office pay a lot of attention to the voters. So we really think this is just a traditional exercise in democracy. The people have to be listened to, and the people have to speak.

CURWOOD: Looking outside the United States, what needs to be done to help places like India, for example, which, yes, it may be the number three or number four world emitter with a billion people, but their per capita emissions make them, what, like 134? How can India move forward in these times when carbon needs to be reduced, but that's all they have right now?

CURWOOD: How can they afford this? I mean, capital costs in India - 10, 12, 13, percent to borrow money. A company here in the US, if it wants to go solar or wind can borrow that money for half, a third of that expense, and there are plenty of people willing to lend it to them. In other words, how do you get financing going at an international level at the scale that's need to change things?

STEYER: Actually, I think that's a great question because when you think about the cost to India, this is by far, the cheapest way of generating energy. And the question is, the capital costs. And so, I think, as we move forward, that is where the coordination of nations and public and private entities are going to have to push to reward them for making what are smart decisions because I know that the capital costs in India are relatively very high to what they are in the United States, but that would also be true for coal plants. But the fact of the matter is, we need to help them adopt energy in general because if they do, they'll be adopting clean energy. 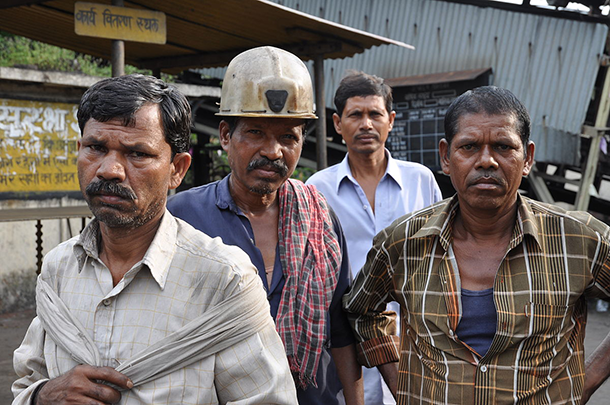 Indian coal miners. Steyer argues that with the help of international financial incentives, India can make the transition to renewables, which would significantly cut their emissions and improve public health. (Photo: Biswarup Ganguly, Wikimedia Commons CC BY 3.0)

CURWOOD: But they can borrow money for coal much cheaper than they can for solar because coal is proven there, there are coal reserves, whereas they say, the sun can only be used six to eight hours a day and there is less willingness to lend for solar, for example, over there.

STEYER: Well, that is something where I think the international financial community needs to start checking exactly what their function is, what they are thinking because, the fact of the matter is, if you look at the United States of America, a number of banks have withdrawn lending to coal. So why they would think that would be different in different parts of the world, I'm not sure, but I think if you look forward out into the life of a plant, which is at least 30 years, the idea that that could be a good investment that's going to be a safe investment, seems to me to be kind of silly.

CURWOOD: What moves are you making around the world? Are you in India? Are you in Kenya? Are you in Chile? Where are you taking your expertise to bridge the knowledge gap as to how you finance advanced technology?

STEYER: Well, there are a couple of points I make. One is, I haven’t been making my own investments for three years. Secondly, anything we do in the renewable space we've said we will give away the profits so people don't think that I'm advocating for something so I can make a buck for myself.

STEYER: And that is what we are trying to do, we are trying to point out to people, a different way of looking forward. I think to a very large extent, the financial world is controlled by their own computer programs. We think the accounting in those programs is faulty because it doesn't include certainly the health costs of fossil fuel plants, but we also think the projections of costs and expectations are also faulty, so that's why we're pushing really hard for people to starting thinking differently about projected costs and technologically driven energy, why we want them to include the costs of health and GHGs in fossil fuel energy, and why we're saying to people, look, the actual work that's been done shows these will create jobs net, net, net.

CURWOOD: Tom Steyer is the founder of NextGen. Thank you so much.

STEYER: Steve, thank you so much for having me.

The Guardian: Billionaire activist urges Obama to focus State of the Union on climate change

About Tom Steyer and NextGen Climate