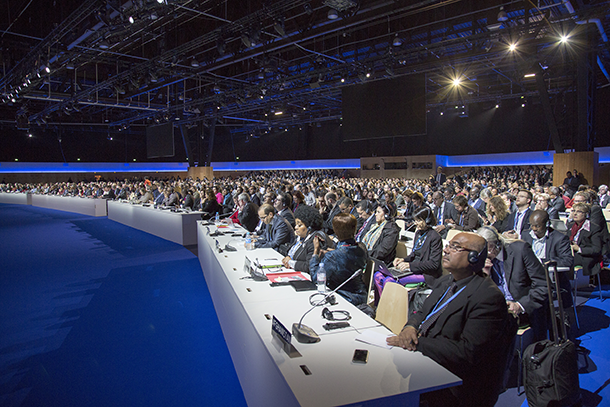 CURWOOD: From the climate summit in Paris, France and PRI, this is Living on Earth.

CURWOOD: Now that delegates here have accepted the Paris Agreement it’s clear that we are in a new era for international climate diplomacy. The logjams that bedeviled international cooperation on global warming for decades have been broken. China and other major greenhouse gas emitters in the developing world will now stand alongside rich developed countries to lower emissions. And the United States is no longer opposing UN climate action. And while the pledges to cut emissions are voluntary, countries will be legally bound to verify the progress that they do make. Secretary of State John Kerry explained why this is so important for the US.

KERRY: We spent $126 billion undoing the damage from eight storms of greater intensity than we have ever seen before. That’s what we did here in the United States. I was in the Philippines and I went to the place where the typhoon came through, and it just was staggering to see the wood splintered all across the mountain, water that came up above the control tower of the airport, homes destroyed in massive numbers. And that’s the future, folks, unless we tame this monster. So this is a moment.

CURWOOD: For vulnerable countries, such extreme weather is an existential threat. That fact and many demanding voices helped delegates settle on one of the more ambitious innovations in this compact — to call for a limit in atmospheric warming to just 1.5 degrees, down from the goal of two degrees Celsius set six years ago.

CURWOOD: Of course, greenhouse gases already released to the atmosphere ensure that this is an aspirational goal, rather than an achievable one. White House science advisor John Holdren.

HOLDREN: The fact is that it is already a great challenge to achieve two degrees. There’s been a lot of conversation at this meeting about one and a half. I would say most science and technology experts would say that one and a half is close to impossible at this point unless and until we can find a way to turn emissions negative. Just to get to two degrees we need to get emissions to zero in the later part of this century. And if you understand that getting to two requires zero emissions then it becomes clear that that getting to 1.5 requires negative emissions in the last part of this century. The way you get negative emissions is you have to figure out how to pull large quantities of carbon dioxide out of the atmosphere and sequester it in the earth. That’s very hard.

CURWOOD: Still, the science advisor thinks it’s a good thing this new figure is in the agreement. 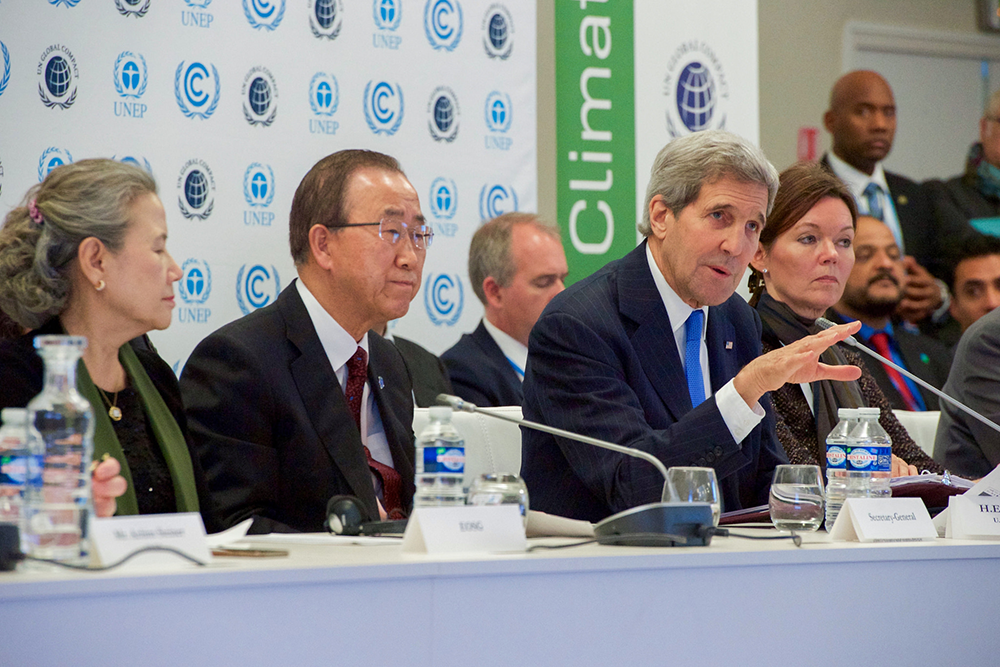 HOLDREN: You know I think it’s valuable to talk about one and a half in part so that people understand that two is not safe. It is just the best that governments thought they could manage to achieve. We're going to see rising sea level continuing, even if we could limit to one and a half. We’re going to see more torrential down pours, more wildfires, more droughts, more of the most powerful storms. The fact is we are already seeing dangerous human interference in the climate system at .9. The goal of avoiding dangerous anthropogenic interference with the climate system, that’s gone. We’re already experiencing it. The question is not can we avoid dangerous. The question is, can we avoid catastrophic?

CURWOOD: Jennifer Morgan, Global Climate Director for the World Resources Institute, is a long time veteran of these talks.

MORGAN: I'm very excited about the results of the Paris Agreement. I think that countries have had a breakthrough here. The tectonic plates have shifted. This is an agreement for all countries and a common framework. It moves away from the division between developed and developing countries; still differentiates and is fair so that the countries with less capability have to do less, but everybody is on the same page, to really deal with the climate crisis.

CURWOOD: Where is science in this deal? 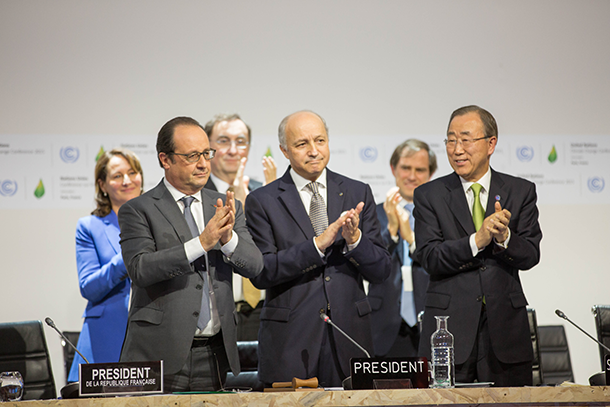 MORGAN: Science is at the core of it, which is one of the reasons that I'm so excited. So you have not only the below 2 degrees target, that's been there a long time, but basically a decision or an understanding that that's too dangerous, based on science. And then you have a long-term goal for the agreement, which is formulated quite scientifically about a balance between human emissions and human sinks -- forests; and that those have to get down to net zero in the second half of the century.

CURWOOD: If you do the math, the commitments that the countries have put forward here would at best keep the warming from going above, say, 2.7 degrees Centigrade, and yet this agreement calls for us aiming for 1.5. How do you bridge that gap?

MORGAN: Well, I think in the real world, it means a transformation of our energy systems; it means a shift into renewables, it means more sustainable transportation systems. And the agreement itself has mechanisms in it to help drive that. The long-term goal, hopefully, will get banks to shift their funding away from high-carbon infrastructure into these clean, renewable sets of infrastructure and do much more actually than what the agreement even looks like it will do today. 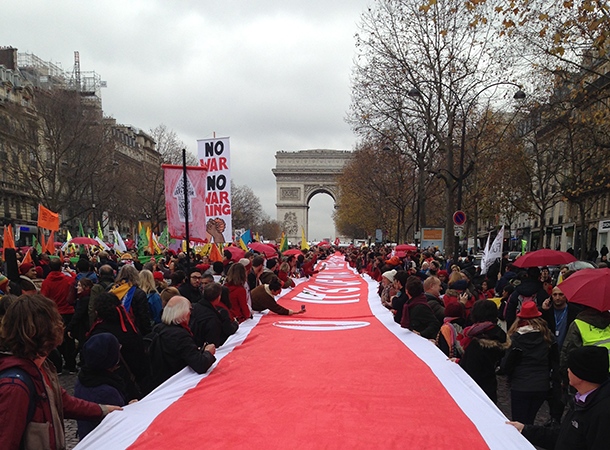 As the COP21 drew to a close, a demonstration near the Arc de Triomphe sought to draw attention to the red line we cannot cross if we are to maintain a “just and livable planet.” (Photo: Emmett FitzGerald)

MORGAN: Adaptation was a major priority for Africa and other countries here; they wanted it to have political parity with emissions reductions, because they're dealing with impacts now. The agreement has a strong adaptation component, a long-term goal to build resilience in communities and different ecosystems; it requires adaptation planning for all countries; it has a stock-take every five years to see how countries are doing on this adaptation, how much support is being provided; and also a balance on the funding will go between mitigation and adaptation. So I think it's a pretty robust adaptation approach here.

CURWOOD: So there's some new language in this I hadn't seen before. We're talking about loss and damage for the first time. What's that all about?

MORGAN: Well, there are impacts happening now around the world, and some of them are going to continue and cause damages -- irreplaceable damages, permanent damages. And the poorest countries and the most vulnerable countries wanted some assurances and mechanisms and insurance mechanisms to work with them to deal with these long-onslaught damages. And so that's a new approach -- it's an unfortunate one, because it basically means that the impacts are happening so fast that you can't adapt to everything. So you need to be thinking about these permanent damages.

MORGAN: In my conversations with the small islands, with the least-developed countries, my sense is that they think that it is a good step towards fairness, that the provisions here for loss and damage, for adaptation, for finance, starts to get us there. And the inclusion of the 1.5 degree temperature goal, in a way, keeps them still in existence. It's clear that there's so much more to do for them in order for this to be fair. But I think it's a good shift, it's a good start. And we just need to keep at it.

CURWOOD: How did this agreement come together? This has been very difficult to do; we saw Copenhagen go up in smoke, we saw the deal in the Hague go up in smoke; Kyoto was just sort of gaveled through with a fair amount of objection. How was this meeting of the United Nations Framework Convention on Climate Change able to reach an agreement here in Paris that really does have everyone engaged?

MORGAN: There were so many different factors, but I think a number particularly come to mind. First was the commitment of leaders. President Obama himself spent tremendous time and energy engaging with other heads of state, working with China, working with Chancellor Merkel, Prime Minister Modi from India; that was quite different. But the other thing that just has struck me throughout this whole year is the French. The presidency of these COPs makes a big difference, and the French diplomatic approach was sophisticated, it was caring, it built trust, and at the end, I think, it has been the best-run COP I have ever been to.

CURWOOD: A number of folks from what you might call civil society aren't so pleased with this. What's your response?

MORGAN: Well, I think it's clear that this is one piece, that we are in a transformation that is going to take time; and that it means that tomorrow we have to get up and keep going. We have to keep going and shifting away from dirty fossil fuels, in building out renewable energy. But I think Paris has accelerated that pace of that shift, and I think that's a good contribution to the fight against climate change.

CURWOOD: There's no mention in this agreement about, as some would say, keeping fossil fuels in the ground. And there's some concern by folks in civil society about that. Your response?

MORGAN: If you want to get to net zero by the second half of this century, you have to leave a lot of fossil fuels in the ground.

CURWOOD: Jennifer Morgan is Global Climate Director for the World Resources Institute. Thanks so much, Jennifer!

CURWOOD: Maybe I should say congratulations.

MORGAN: Yeah, I think so! [LAUGHS] 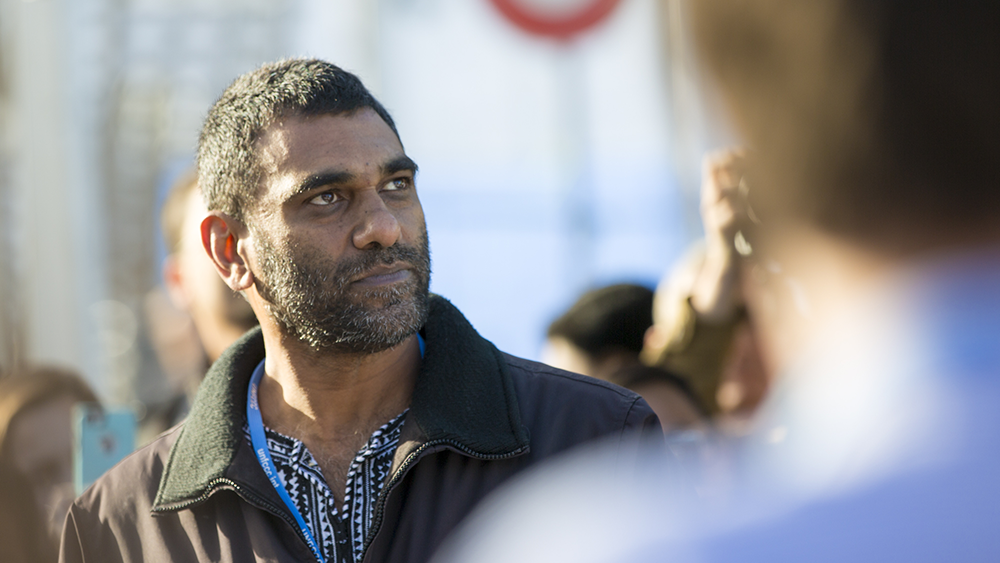 CURWOOD: Climate justice activists took to the streets again as the Paris Agreement came together. More than ten thousand people gathered near the iconic Arc de Triomphe in downtown Paris to stretch a giant red banner symbolizing a red line that they say we cannot cross if we are to maintain a “just and livable planet.” They argue the Paris agreement does not go far enough, and the world needs to totally decarbonize its economy as quickly as possible and keep fossil fuels in the ground.

CURWOOD: Kumi Naidoo, Executive Director of Greenpeace International, says this kind of challenge is not new.

NAIDOO: If history teaches us anything, when humanity has faced a major challenge or a major injustice, those struggles only move forward when decent men and women stood up and said, “enough is enough and no more. We’re prepared to put our lives on the line, we’re prepared to go to prison if necessary.” And given that many of the most powerful leaders on our planet seem to be all having a similar health problem, which is they all sadly having a problem with hearing the appeals of their citizens, we know that civil disobedience is something that gets them to sit up and take notice.


Paris climate talks: With a final deal elusive, a push for compromise

Chasing a Climate Deal in Paris, updates from NYT

With France still on edge, climate negotiators search for consensus

Arc de Triomphe: the best- and worst-case outcomes for the Paris climate talks

Moments from the COP21