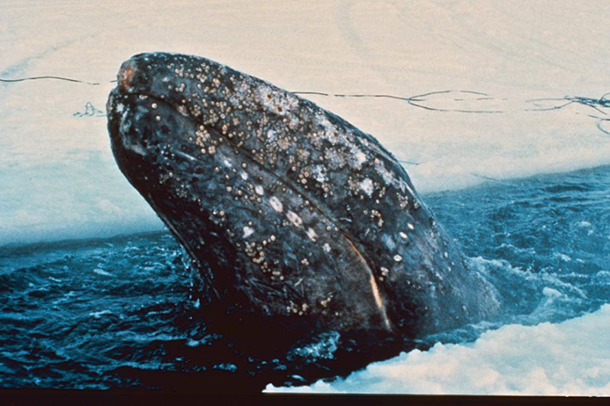 One of three gray whales trapped in the arctic. Scientists carved breathing holes in the ice for the whales. (Photo: NOAA National Marine Fisheries Service)

In this week’s trip beyond the headlines, Peter Dykstra warns host Steve Curwood that though an overnight deep freeze as portrayed in the movie “Day After Tomorrow” is impossible, Atlantic sea currents seem to be changing. He also describes Donald Trump’s recent anti-wind farm campaign near his Scottish golf resort. Traveling back in the history annals, we remember two prominent tales of whales.

CURWOOD: Time now to check in with Peter Dykstra, and check out news lurking beyond the headlines. Peter’s with Environmental Health News, that’s EHN.org and the DailyClimate.org, and joins us from Conyers, Georgia. Hi there, Peter.

DYKSTRA: Hi, Steve. Remember that climate change-themed Hollywood production from about a decade ago, “The Day After Tomorrow?”

CURWOOD: Yeah, a disaster scenario for abrupt climate change. I recall that the critics were split on it, but scientists weren’t.

DYKSTRA: The scientists thought it was awful, and so did I: it was heroic climate scientist Dennis Quaid, an over-the-top fictionalization of Vice President Cheney, and Jake Gyllenhaal can’t get a cab in Manhattan because it’s under 70 feet of ice, but Jake still gets the girl. The total shutdown of ocean currents causes an Arctic deep freeze in a matter of days in a way that’s possible only in the imaginations of Hollywood writers. But a new study in Nature Scientific Reports says a less extreme version of the “Day After Tomorrow” scenario is possible if the system of air and water currents over the North Atlantic should shut down.

DYKSTRA: Right, in that scenario, much of Europe and North America would get colder while the rest of the world heats up. Scientists from the University of Southampton say the process might take up to a century, but its potential consequences, including exaggerated sea level rise on the U.S. East Coast, could be huge. Scientists have known about this possibility for a long time, but now there’s a new focus on it.

CURWOOD: Well, we don’t want life to imitate a bad movie. What’s next?

DYKSTRA: I want to turn to the seemingly unstoppable growth of wind power, and a man who just doesn’t seem to get the media attention he deserves, Donald Trump.

DYKSTRA: No. I didn’t say Donald Trump doesn’t get enough media attention, I said Donald Trump doesn’t get the media attention he deserves. Last week, the Donald’s British attorneys took his anti-wind farm campaign to the UK Supreme Court. He built a golf resort on the Scottish coast, which involved plowing up moors and sand dunes to install eighteen holes and a hotel where those dunes and moors used to be. But the view of a planned offshore wind farm has Trump in an uproar.

DYKSTRA: Well in this case, he’s worried that the golfers amidst those former moors and sand dunes will see the “monstrous blight” those wind turbines would be, and Trump is trying to get the permit for the eleven windmills overturned in the latest round of a long running battle.

CURWOOD: And however it turns out, I suppose this does count as foreign policy experience. Hey, what’s our environmental history note for this week?

DYKSTRA: A couple of things about whales: one from the 19th Century, and one from the end of the 20th Century. In October 1851, Herman Melville published one of the books that’s sometimes called the Great American Novel, Moby Dick, in which an angry white sperm whale squared off against an obsessive whaling captain who manages to track down the exact same whale that bit his leg off years earlier.

CURWOOD: Well, he did have all that 19th century technology to find that same whale in a very large ocean.

DYKSTRA: And Captain Ahab manages to lose his boat and his crew in the process. It sounds a bit like Reality TV, doesn’t it? I’ve always thought Melville’s skill was in portraying both his main characters as bad guys.

CURWOOD: Or at least a bad guy and a mad marine mammal.

DYKSTRA: Point taken. Well, in October 1988, it was our turn to obsess over whales as winter ice closed in around Barrow, Alaska. A cameraman for Barrow’s community TV station came upon three California gray whales trapped in the Arctic ice. If they couldn’t break free, the whales would die. The drama captured the town’s attention, then it captured the world’s attention. We went crazy over these three whales – reporters and whale rescuers descended upon this Arctic town – the Soviet Union sent a nuclear icebreaker to free the whales, and it’s believed two of the three gray whales eventually cleared the ice and swam south for the winter. Some scientists tried to spoil the fun by pointing out that about 200 gray whales get trapped like this every year – but not in front of a camera and without the international attention or an eventual movie deal starring Drew Barrymore.

CURWOOD: Leave it to scientists to let facts get in the way of a great story.

CURWOOD: Peter Dykstra is with Environmental Health News, that’s EHN.org and the DailyClimate.org. Thanks, Peter. Talk to you soon.

DYKSTRA: All right, Steve. We’ll talk to you next time.

Nature Scientific Reports study: Competition between global warming and an abrupt collapse of the AMOC in Earth’s energy imbalance

A Whale of a Tale: The Real 'Big Miracle' Story