The Beef With Ground Beef 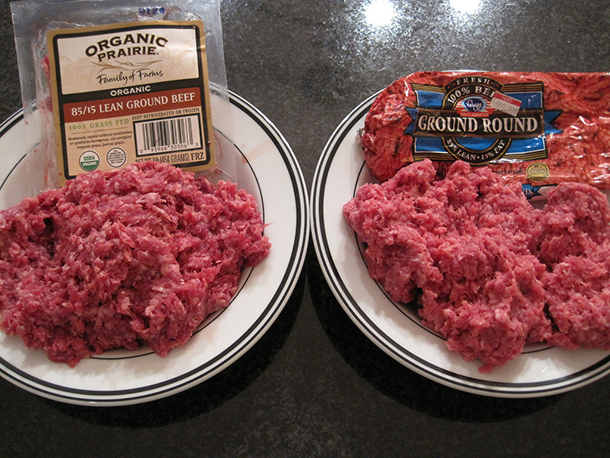 Americans love hamburgers, but a new report in Consumer Reports suggests that not all ground beef is equally safe. The Magazine’s Director of Consumer Safety and Sustainability, Urvashi Rangan, spoke with host Steve Curwood about her group’s investigation into dangerous bacteria in ground beef products and explains why sustainably-sourced meat may be healthier for consumers and better for the environment.

CURWOOD: Though it can be hard on the climate, Americans love ground beef: burgers, tacos, chili. With simple advertising slogans like “Beef, it’s what’s for dinner” and “Where’s the beef?” we hardly need to be sold on it. But new research by Consumers Union looked at the bacteria in our favorite ground meat, and the results may have us thinking twice before eating that medium-rare slider. Urvashi Rangan is the Director of Consumer Safety and Sustainability Group for Consumer Reports and she joined us on the line to discuss their study, which is published in the current issue of Consumer Reports.

RANGAN: We decided to take a look at raw ground beef out there - we've been looking at bacteria levels, looking at how resistance those bacteria are to various antibiotics and how many antibiotics. We also tried to segment our meat studies into what's conventionally produced versus what's more sustainably produced, and in this study we were able to draw some pretty significant differences between those two groups when it came to certain bacteria levels, as well as how likely those bacteria were to be resistant to multiple antibiotics.

CURWOOD: Now people talk of hamburger in the form of a quarter pounder, but your research was a quarter of a ton, I gather. 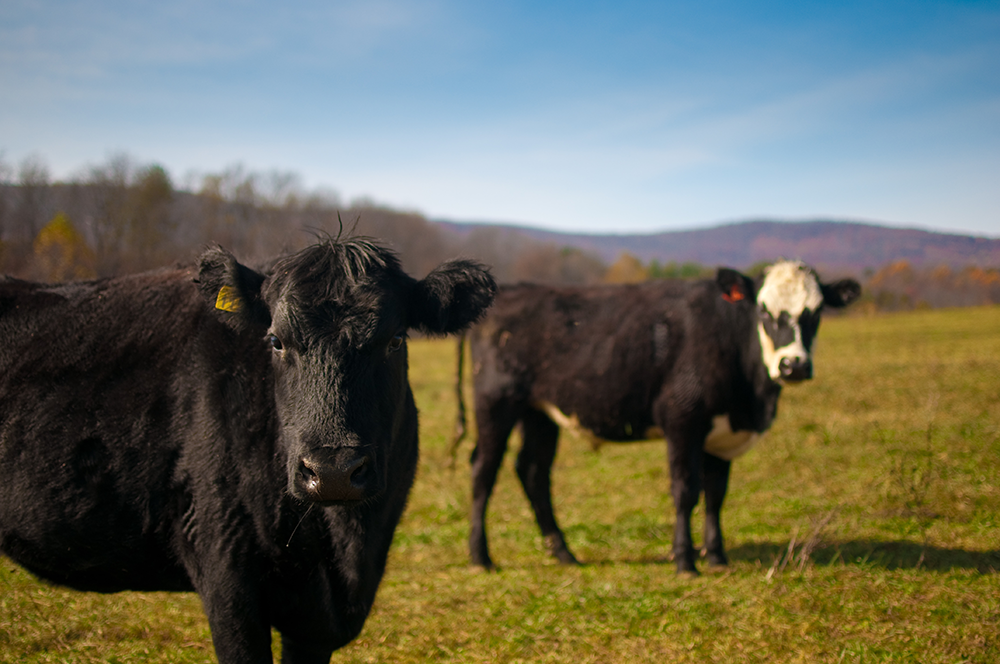 RANGAN: That's right. We looked at about 485 pounds of ground beef around the nation. We shopped in about 26 different cities, 100 different stores over a three-week period and we then sent those off for testing for five different bacteria as well as our antibiotic resistance testing.

CURWOOD: So tell me about the bacteria that you were looking for?

RANGAN: We were looking for a variety of bacteria, some of which are indicators of filth and fecal contamination. We also looked at certain pathogens that are associated with beef illnesses and some other interesting organisms that aren't really being looked for right now on beef but definitely have a relation of food-borne illness like E. coli or Enterococcus and even Staphylococcus aureus. Just to dive in, we found about two percent salmonella on our conventional samples. We didn't find any on the sustainable samples. The rates for salmonella in ground beef are about one percent. It's also an organism related to a lot of outbreaks associated with beef.

CURWOOD: So how much Salmonella is too much?

RANGAN: Salmonella is actually one of those pathogens that is fairly potent. You don't need a lot of Salmonella to get sick, unlike the amount of toxin from Staphylococcus aureus you might need to be exposed to. On the other hand, E. coli 0157, you need very little to become sick and then there's really a lot of difference in terms of the illnesses themselves. They can all be quite serious, they can all lead to serious events. E. coli 0157, however, can have probably the most severe consequences. A lot more deaths are associated for the number of E. coli disease incidences we have.

CURWOOD: So how much E. coli did you find in your samples? 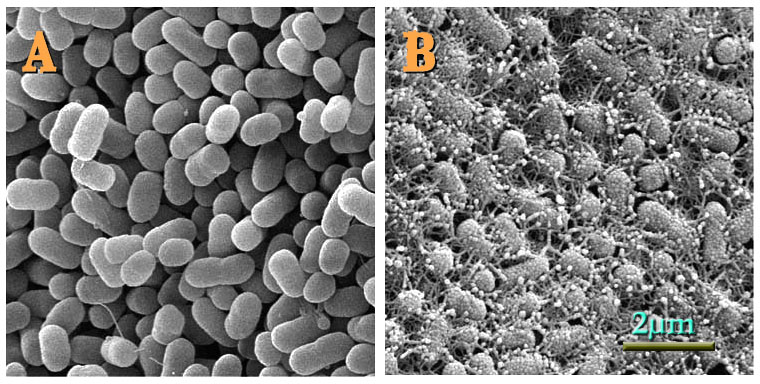 Various E. coli O157:H7 strains are known to cause severe food poisoning, which could lead to kidney failure and even death. Fortunately, none of this deadly strain was found during Consumer Reports’ investigation. (Photo: USDA, Flickr Public Domain)

RANGAN: I think the good news is that we didn't find any of the 0157s or the shiga toxin producing E. colis that we know are often associated with foodborne illness. Because those things only occur at about .5 percent in the beef supply, we didn't really expect to find any in 300 samples that we tested. But here's what we did find. When you're looking at E. coli you're also looking for the whole family of E. coli. We found a big difference between our conventional sample pool when it became general E. coli levels, about 60 percent in our conventional versus about 40 percent in our sustainable sample pool.

RANGAN: All these pathogens really originate in manure and it's all about manure management then from the farm onto processing and everything else. So, 18 percent of the bacteria we found on conventional were resistant to three or more antibiotic classes that are important in treating human infections. When we compared that to the sustainable pool, only nine percent were resistant to three or more antibiotics, so about half the rate of the conventional pool. And then even more interesting when we pulled out grass-fed again, only six percent of the bacteria on the grass fed samples were resistant to three or more antibiotic classes. So big differences in those, and about 55 percent of conventional samples have Staphylococcus aureus. By contrast only 27 percent of our sustainable samples had Staphylococcus aureus. And that's really significant and it gets at some previous scientific studies. They think that because of the natural diet, because they're not fed grain, that can create an acidic environment in the stomach which is very conducive to E. coli formation, that grass fed animals actually shed less E. coli in their manure, and so these more sustainable systems can actually produce less E. coli even on the final product itself. 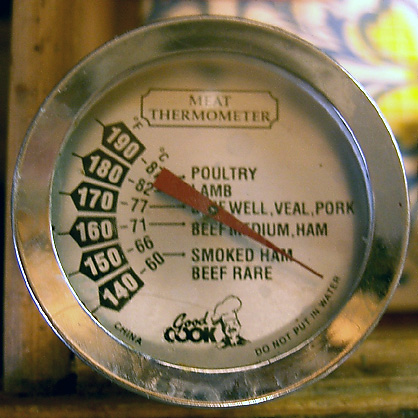 Safe food storage and cooking practices can drastically decrease your chances of contracting a food-borne illness.Beef should be cooked to at least 160 degrees Fahrenheit. (Photo: Bev Sykes, Flickr CC BY 2.0)

CURWOOD: But if the most sustainably produced grass raised beef still has a six percent chance of having antibiotic resistant bacteria on it, how prudent is it to eat ground beef at all?

RANGAN: All raw meat will have bacteria. It is the nature of it. I think for us it's about looking at illness rates that go on every year compared to what's out there on the market and seeing if there are differences in how to make the system safer and more sustainable production systems we already know are better for the environment, they’re better for the animals, and now in some ways we know it's actually producing safer meat and in fact more sustainable systems internalize the costs of environmental pollution. They make sure that that's not occurring. They manage manure and the most sustainable systems don't confine animals and so these more sustainably produced samples are trying to really address those root causes of why we use these antibiotics on a daily basis. The fact that you see some resistance and some of the sustainable samples may be related to how persistent resistance is in the environment. So this is really about stopping the practices that are making the situation much worse than it needs to be.

CURWOOD: Urvashi Rangan is Director of Consumer Reports Consumer Safety and Sustainability Group. Thanks for taking the time with us today.

RANGAN: Thanks a lot, Steve. I appreciate it.

How Safe Is Your Ground Beef?