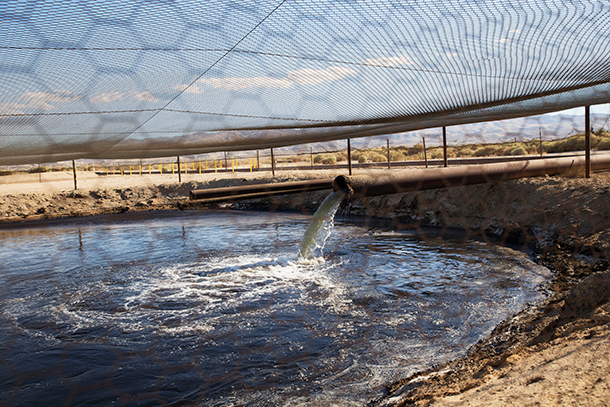 Over 27 years ago, the EPA pledged to update its regulation of toxic waste from oil and gas drilling, including fracking, but it has yet to issue new rules. Seven environmental groups have now filed a 60-day notice of intent to sue the EPA for failing to keep its promise. Lead attorney Adam Kron from the Environmental Integrity Project discusses the toxic and radioactive contents of fracking waste and proper disposal methods with host Steve Curwood.

CURWOOD: From the Jennifer and Ted Stanley Studios at the University of Massachusetts Boston and PRI, this is Living on Earth. I’m Steve Curwood. Oklahoma, Ohio and Texas are now earthquake zones, thanks to tremors that are being blamed on wastewater injections from hydraulic fracturing operations for oil and gas. But it’s been 27 years since the US Environmental Protection Agency updated its rules for wastes from oil and gas drilling. With the recent fracking boom there are not only many more injection wells but toxic wastewater is also winding up in leaky ponds and landfills, and is even being sprayed onto roads and fields. Now, a coalition of seven groups, including the Environmental Integrity Project and the NRDC has filed a notice of intent to sue the EPA over its failure to regulate. Adam Kron of the Environmental Integrity Project is the lead attorney in the lawsuit. Adam, welcome to Living on Earth.

KRON: Yeah, thanks for having me.

CURWOOD: So tell me why are the Environmental Integrity Project, the Natural Resources Defense Council and others taking this legal action to push EPA to regulate waste disposal from oil and gas drilling? 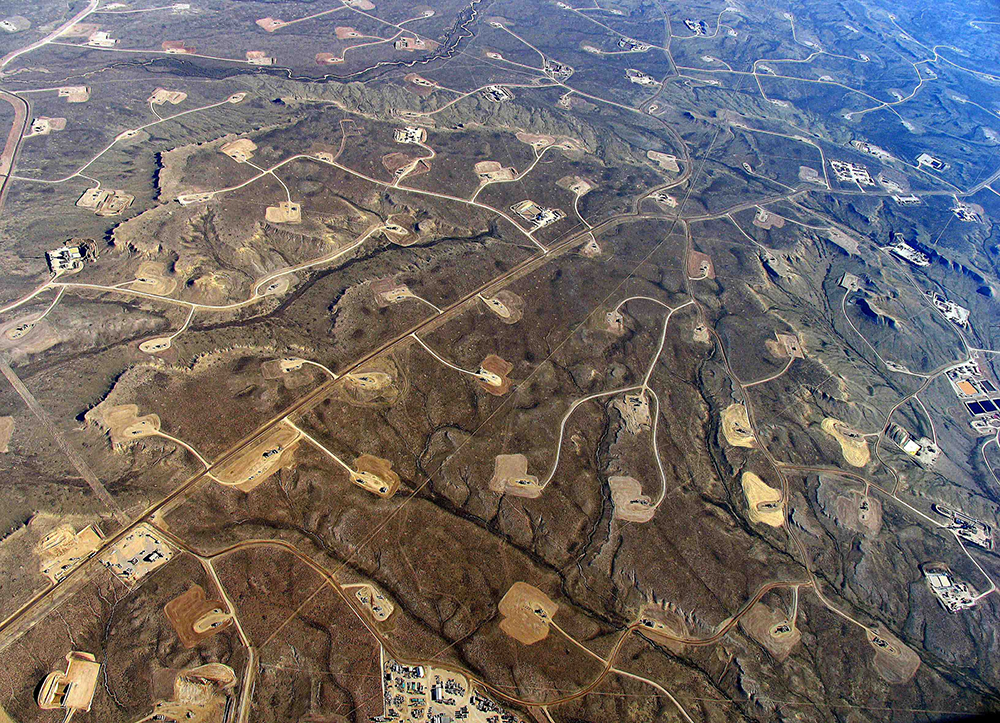 Environmental groups are concerned that the EPA’s waste disposal rules, which were last updated in 1988, do not properly regulate fracking waste disposal. (Photo: Simon Fraser University, Flickr CC BY 2.0)

KRON: Sure, so we have basically a booming oil and gas industry, and that's driven by hydraulic fracturing and the development of shale resources and these have resulted in a vastly increasing amount of wastes, both in terms of wastewater, millions of gallons per well; in terms of drill cuttings, hundreds of tons per well; and all these wastes have to go somewhere for disposal. So the problem is that these disposal practices and the needed controls haven't kept pace with this increasing waste stream. So what we're asking EPA to do is to update its waste disposal rules under the Resource Conservation Recovery Act specifically to address these oil and gas wastes.

CURWOOD: What's this waste composed of and how safe is it for the public to be near it?

KRON: So there are basically two main components of this waste. There's the wastewater, and that's all the water that's being used for hydraulic fracturing and to some extent drilling. And then you've got the more solid wastes, which are drill cuttings, drilling muds, and frac sands. The wastewater has high-level salts, it's got certain radioactive materials from underground, it's got every type of hydraulic fracturing chemical that's added to water when it's first injected into the wells and then you've got the drill cuttings which have high levels of metals. We're talking barium, mercury, lead, high levels of radioactive components from the formations underground and just a variety of organic components such as benzene and toluene and whatnot. So there are a variety of different levels of these components depending what type of waste and where it goes, but what we've known is that the public should not be in direct contact with these wastes. 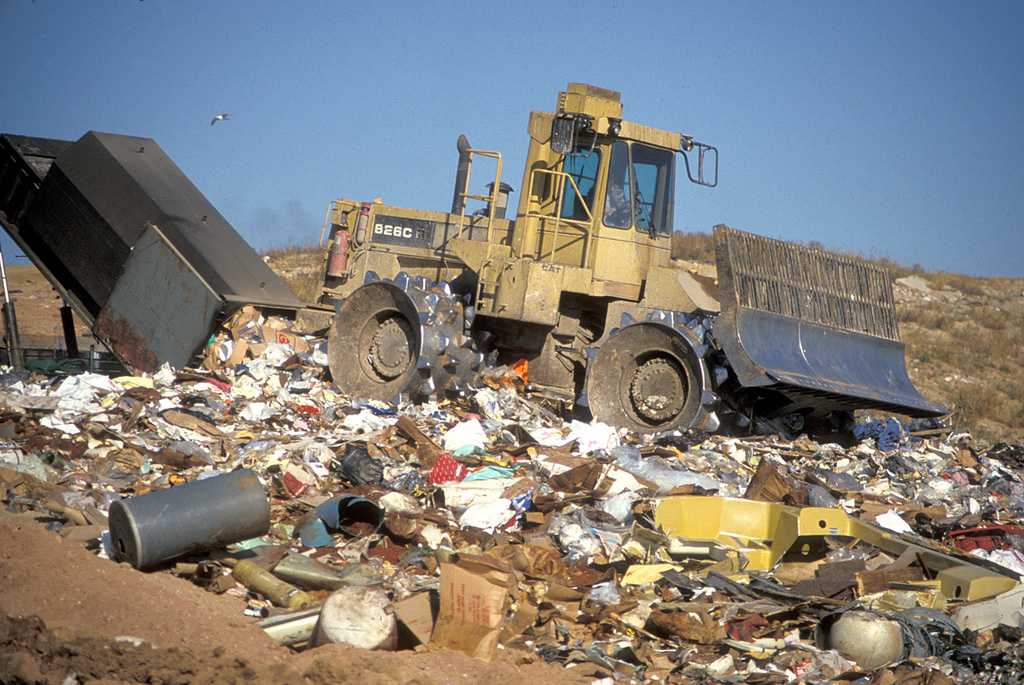 Solid waste from fracking is currently disposed of in landfills and open-air pits. Environmental groups are concerned about possible leakage of toxins from the waste into groundwater. (Photo: Wisconsin Department of Natural Resources, Flickr CC BY-ND 2.0)

CURWOOD: So, briefly what are some of the concerns you have about what's been happening to the waste?

KRON: There are a variety of different practices that the industry uses to dispose of these wastes, and so these are underground injection wells, which we've recently seen proliferating across the nation. These are open-air ponds and pits where industry stores and to some extent disposes of its wastes, spreading wastewater on roads and fields, and also just sending more solid wastes to your typical landfills. Just, county landfills can accept this waste.

CURWOOD: So you want to see this stuff better regulated. Why has the EPA not updated the rules for this kind of oil and gas extraction as it's, well, supposed to?

KRON: That's a very good question. EPA looked at this years ago back in 1988, and even back then it said that the generic rules that govern oil and gas waste, these do not fully address gas waste concerns. So it proposed to tailor the rules to address the specific chemicals and components and waste disposal practices of the oil and gas wastes. In particular, it said that we need to be able to deal with these large-volume wastes like wastewater and drill cuttings. For whatever reason, EPA never make good on that promise, so we're here 27 years later and were asking EPA to do what it saw fit to do back than, well before the fracking boom, well before we got these vast quantities of waste.

CURWOOD: By the way, Adam, what have various states done to regulate this fracking waste with this vacuum of updated federal regulation?

KRON: So the states have done a variety of different things. Some states have done a pretty noble job of it. Some have handled it in less of a protective way. So, for example, one state that has been in the news a lot is New York. It recently been banned high-volume hydraulic fracturing which by and large was a result of a study of looking into the issue very specifically and considering the fact that New York draws so much of its water from the area in which this oil and gas fill-in would take place. The sort of irony of this is that even though New York has banned high-volume hydraulic fracturing, it still allows the industry to come to New York in the form of waste disposal. So you've still got spreading of oil and gas wastewater on New York's roads. You've still got drill cuttings going to New York's landfills. So even what many consider to be the best state for the regulation of oil and gas industry still has this blind spot when it comes to the actual regulation of the waste itself. 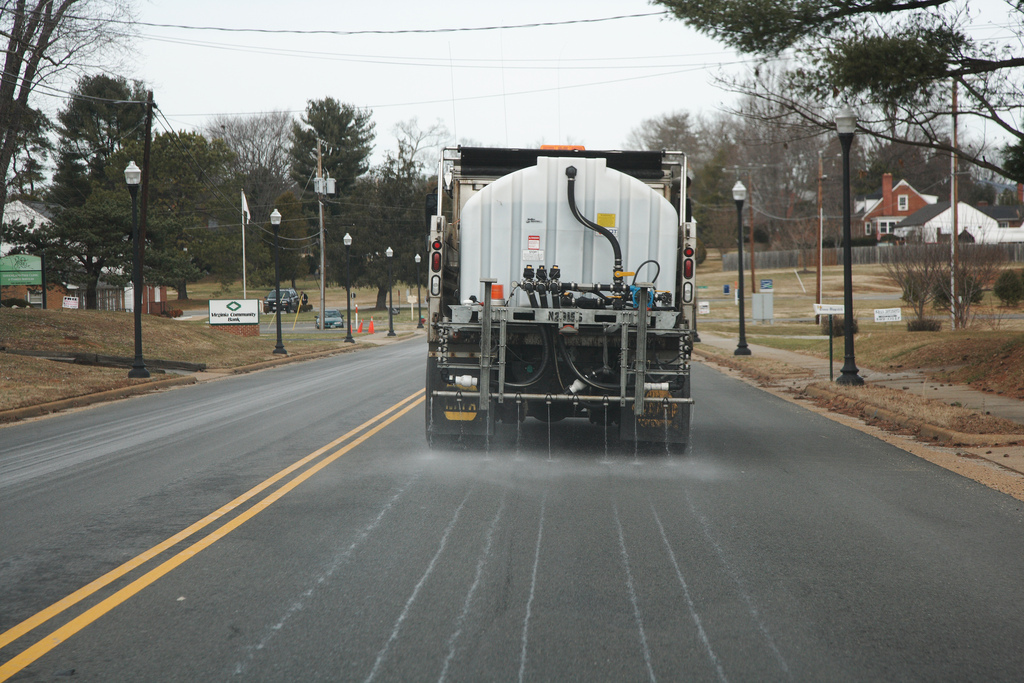 “Frackwater” contains high levels of salt, because of this, some municipalities spread it on roads as a de-icer in the winter. (Photo: Al Covey/Virginia Department of Transportation, Flickr CC BY-NC-ND 2.0)

CURWOOD: So if you and your partners were in charge of regulating fracking wastewater, what would the rules say?

KRON: I think, for one, the underground injection wells, they need across-the-board very specific regulations to address this rising concern with earthquakes, what they call ‘induced seismicity’. States that have never had earthquakes before in recorded history like Ohio are seeing hundreds of them. We need to address this in a certain way, whether that means reducing the number of deep wells, whether that means reducing the volume of injected wastewater, something needs to be done. Second we need to look at these open-air ponds and pits that accept wastewater and some certain solid wastes from industry. These are notorious for leaking, for spilling, and just getting into groundwater, and getting into surrounding creeks. Some states have taken the measure of banning them outright and saying “you have to store your waste in tanks” and that's a pretty good read on the situation. Third, spreading wastewater on roads and fields just shouldn't be done unless it can be proven that this has constituents that are safe for human contact. And then finally, just landfills. Right now, your basic typical landfill can accept oil and gas waste, and that needs to stop until we're able to better assess what are in these drill cuttings and which landfills are truly capable of handling them. 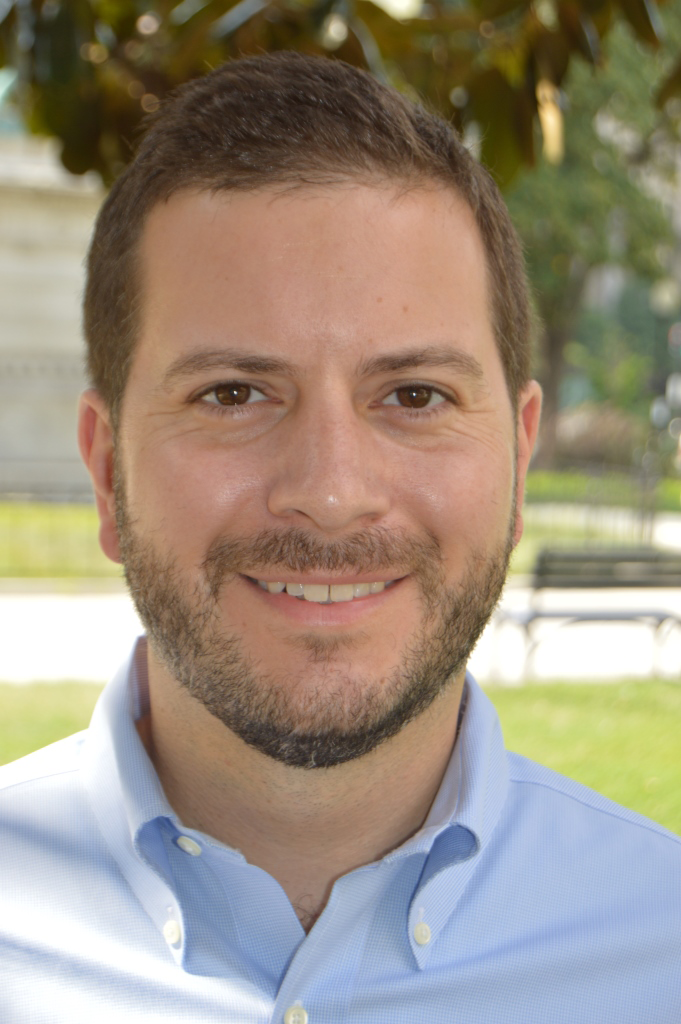 CURWOOD: So the criticism from industry and perhaps some inside of the EPA itself is that you guys just want to shut down fracking, don't like fracking. The response?

KRON: No, we want it to be done right. Congress gave EPA the power to protect the public and to protect the environment and EPA's not doing that right now. If EPA actually comes up with those rules and industry finds it just can't meet them, that's on industry. That shows that it's not safe. But we think it can be done safely. We think that with proper rules the public can be protected properly.

CURWOOD: Now, of course, you can't sue the federal government directly, you have to file a notice of intent to sue the government. In theory, of course, they have 60 days to fix the defect. What would the response from EPA look like and how likely do you think that would be?

KRON: You know, we're pragmatists. We know that to get a rulemaking done takes a year or more. 60 days is not a lot of time, but we're hopeful that in that time EPA can come to the table and give us good indication that it plans to do something, that it has a commitment to what it saw fit to do back in 1988.

CURWOOD: Adam Kron is an attorney with the Environmental Integrity Project. Adam, thanks for taking the time with us today.

[We contacted EPA about the lawsuit and received the following response from Laura Allen, EPA Deputy Press Secretary: "EPA will review the Notice of Intent and any related information submitted to the agency."]