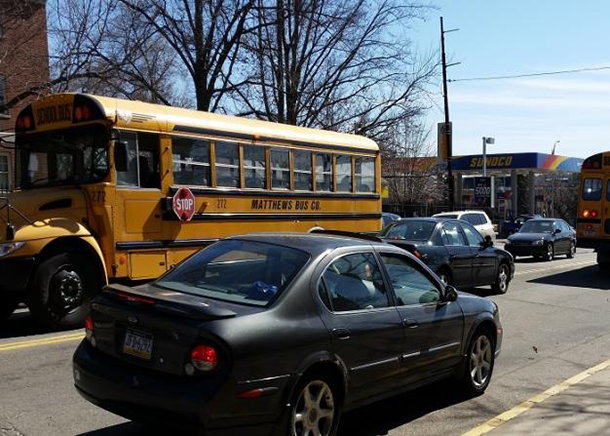 In the US diesel fuel powers mostly trucks and buses, and the exhaust contains thousands of chemicals and over 40 toxic air contaminants. This is particularly hazardous to children, who ride diesel school buses and are exposed to the fumes, especially when buses idle beside schools. But as the Allegheny Front’s Julie Grant reports, new EPA legislation, funding and technology are cutting school bus emissions.

CURWOOD: Back in 2007 new federal rules went into effect that sharply reduced sulfur in diesel fuel, which is mostly used in trucks and buses, and new diesel vehicles have to run much cleaner. The goal is to achieve a 90 percent reduction in particulate pollution, which is hazardous to health, with the elderly and children most at risk. But many older school buses don’t have the new pollution control systems, and new ones are expensive.

So at the urging of the EPA many states, including Pennsylvania now limit the idling of school buses, especially where kids line up. Julie Grant from the public radio program the Allegheny Front has our report from Pittsburgh.

GRANT: It’s fifteen minutes before school lets out for the day, and buses are lined up on the street by a Pittsburgh school building. Some of them are idling: sitting there running the engine.

FILIPPINI: That’s true; it’s probably in the 40s or so.

GRANT: Rachel Filippini is with GASP. The Group Against Smog and Pollution. She says even if were below freezing, state law says buses aren’t allowed to idle.

FILIPPINI: Regardless of the temperature, the law says you have to turn off your engine within five minutes.

GRANT: Filippini says GASP has been monitoring buses in the Pittsburgh School District, to see if they’re following the state’s no idling law. They’re worried about kids’ health - on board the bus, and sitting in nearby classrooms, where diesel fumes can waft in. Filippini says particles in diesel fumes are so tiny; they can make their way deep into the lungs and the blood.

FILIPPINI: They’re kind of sticky, and irregularly shaped, and they have sometimes other toxics or heavy metals that are stuck on to them. And those things which you do not want to be inhaling, are getting a free ride into your body, where they can cause a lot of problems.”

GRANT: The federal government says diesel exhaust is a likely cause of lung cancer, as well as asthma attacks, chronic bronchitis, and heart disease.

GRANT: Sue Roenig thinks buses are cleaner than they used to be.

ROENIG: Actually, I think, being around school buses my entire life, I can tell the difference just walking outside here.

GRANT: Roenig’s family owns a bus company that contracts with Pittsburgh and other school districts in the region. At their garage in rural Sarver, a half hour north of Pittsburgh, the country air can fill up with exhaust fumes.

ROENIG: Like in the morning, when the buses out are lined up, ready to go to pick up students, my eyes don’t water anymore when I walk through the parking lot. So that has to be something. I think there is a big difference actually.

GRANT: Beginning in 2007, the U.S. Environmental Protection Agency started limiting the pollution – the particulate matter, and oxides of nitrogen, from heavy-duty diesel vehicles. Companies that run school buses must either retrofit their exhaust systems, or when they purchase new buses, buy vehicles with pollution controls built in.

The Heinz Endowments offered a half million dollars in 2007 to area bus companies to retrofit them with the new filters. But Roenig’s was one of the only companies to take them up on the offer.

ROENIG: I think it was probably just a matter of a lot of people at the time holding back just to wait to see how it actually worked out. Because sometimes you do things, and it sounds really good on paper, but it doesn’t turn out that way.

ROSS: I thought it was going to be a disaster.

ROSS: But this really worked good. It really did.

GRANT: The Allegheny County Health Department says they don’t know of a central database tracking how many school buses have the cleaner technology, but estimates that around three-fourths should have lower emissions since the law went into effect.

Sue Roenig says some of the new buses they’ve purchased won’t let drivers idle - not even to warm up on a winter morning.

ROENIG: They just shut off. Every ten minutes you have to go restart them trying to get the motors warmed up. Makes for a long morning sometimes.

GRANT: Research shows when everyone in an area uses cleaner vehicles, it can make a real difference in air quality. Albert Presto studies air pollution at Carnegie Mellon University in Pittsburgh.

PRESTO: When these technologies are working well, they can reduce over 90 percent of the particulate matter emissions from diesel vehicles.

PRESTO: Which is an enormous seaport.

PRESTO: And that helped improve air quality at the Port, and in the neighborhoods near the Port.

GRANT: Pennsylvania is moving toward the same diesel control standards as California. But so far, Presto says it’s been difficult to parse out the impact of cleaner school buses in a city like Pittsburgh. There are so many older diesel buses and trucks still on the road without pollution controls.

GRANT: Back at that Pittsburgh school, clean air advocate Rachel Filippini says construction sites and even riverboats can cause more diesel pollution than school buses. But buses have such a direct impact on children, especially when they idle.

Filippini’s group GASP has given schools signs that say “No Idling” to post at pickup zones. The day we were there, some drivers idled anyway, but many did shut down their engines.

FILIPPINI: This is a vast improvement from what I saw last fall.

GRANT: Filippini says when they monitored buses that time, more than a quarter of the buses surveyed were idling, and that’s too many. The Department of Environmental Protection says they’ve gone after some drivers too long, but Filippini says better enforcement could go a long way to keeping the air cleaner for kids. I’m Julie Grant.


More about idling buses, air pollution and health impacts on the Allegheny Front

State of the Air 2015: Most Polluted Cities

GASP, the Group Against Smog and Pollution

IdleFreePA: problems with idling and PA laws against it