Insuring Wildlife and the Lives of Endangered Rhinos 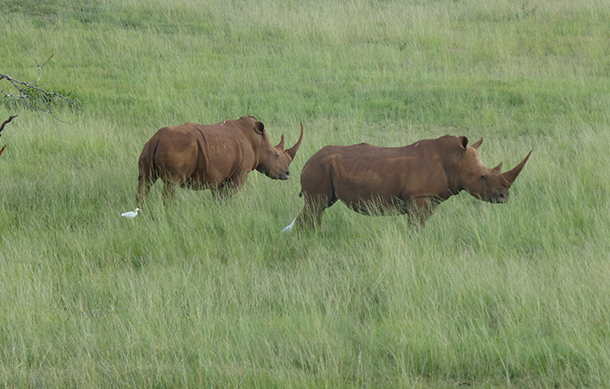 Two white rhinos graze together in the middle of the savannah. (Photo: Bobby Bascomb)

South African game reserves are eager to earn tourist dollars with elephants, giraffes and rhinos. But to protect the rhinos and their prized horns from poaching, reserve owners are insuring their animals and also poisoning the horns. Living on Earth's Bobby Bascomb reports.

CURWOOD: We all know about car insurance, health insurance, and homeowner’s insurance, but here’s a new idea - wildlife insurance. In South Africa, game reserves can spend millions of dollars to buy the animals that tourists want to see. That’s a lot of money walking around at risk, and in the case of certain animals, poaching is a huge danger. Take rhinos...rhino horn is highly prized in Asia for its supposed medicinal properties. On the black market a kilo of rhino horn can sell for more than cocaine, or heroin and 2014 was the worst year on record for rhino poaching in South Africa. And that’s why wildlife insurance can be part of the solution. From South Africa, Living on Earth’s Bobby Bascomb has our story.

BASCOMB: It’s a bumpy ride for half a dozen tourists in an open-air safari truck in Pilanesberg National Park. All eyes scan the savannah looking for wildlife. A Norwegian tourist is the first to spot something.

TOURIST: Look, rhinos on the right!

BASCOMB: If you see a black rhino you should consider yourself extremely lucky. There are just 5,000 of them left in the world and 20,000 white rhinos. Rare as they are, Rhinos are one of the African animals that top every tourist’s wish list to see on safari. So, parks and game reserves must have rhinos if they want to cash in on the billions of dollars wildlife tourism brings to South Africa each year. But owning a rhino is also a liability – one animal will cost an owner more than 20,000 dollars at auction. But a single rhino horn can fetch more than 10 times that on the black market - a strong temptation for poachers - so parks with rhinos are increasingly looking to insure their investments. 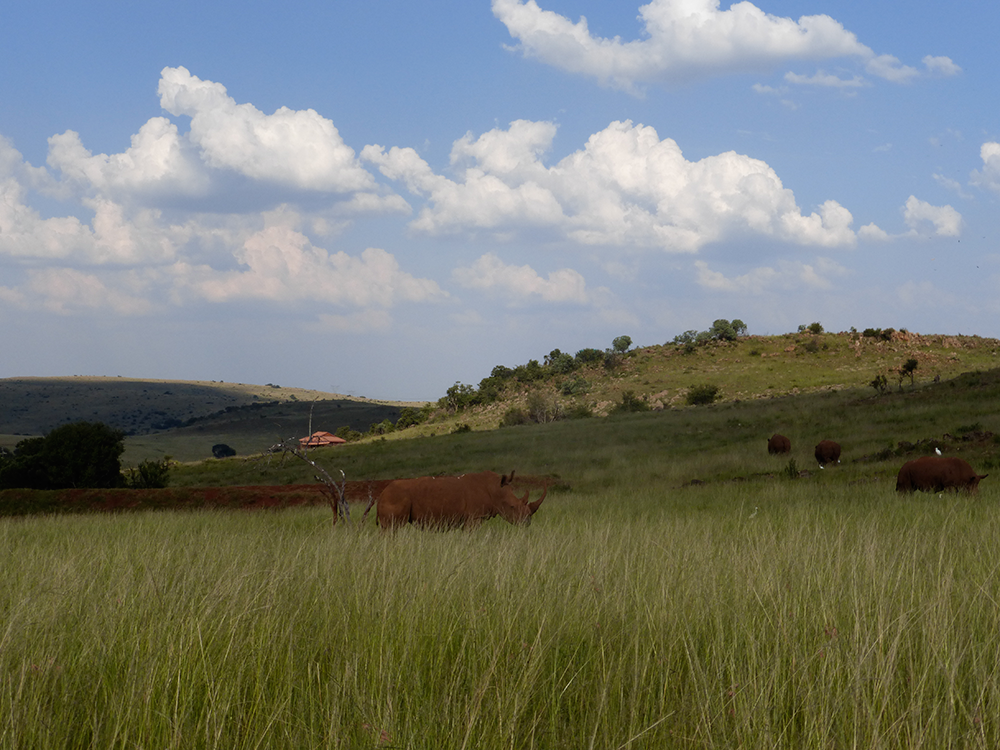 DARROLL: The poaching risk is so horrendous that it is close to being uninsurable.

BASCOMB: Peter Darroll is a Development Manager for One Financial Services, the biggest wildlife insurance company in Southern Africa. They charge roughly 700 dollars a year to insure a rhino against poaching. Darroll says they don’t make much money from rhino insurance but the publicity has brought them more business for other animals. Their biggest moneymaker is buffalo. A quality buffalo can fetch more than a million dollars at auction where buyers are looking for disease resistance and a big set of horns.

DARROLL: Guys are wanting to breed those big horns. I think it’s bragging rights to be able to say mine is bigger than yours.

DARROLL: [LAUGHS] I would put it down to a little bit of that, yes. I think it’s a whole male ego thing.

BASCOMB: Darroll’s company will insure just about any wild animal - elephants, lions, giraffes, which Darroll says are particularly vulnerable to lightning strikes because they are so tall. But only rhino have to go through a special medical procedure before they can be insured - they must have their horns poisoned with a bright pink dye. Rhino horn is much like human hair or fingernails so poison in the horn doesn’t make it into the animal’s blood stream to cause them harm.

Lorinda Hern is co-founder of the Rhino Rescue Project, which developed the horn poisoning technique about 4 years ago. She says the poisons they use will induce symptoms in any one that consumes or handles them.

HERN: At a minimum it would start with diarrhea, nausea, vomiting, severe headaches, all the way up to nervous symptoms, which could be permanent. Some exo-parasiticides also precipitate the development of cancers later on in life. 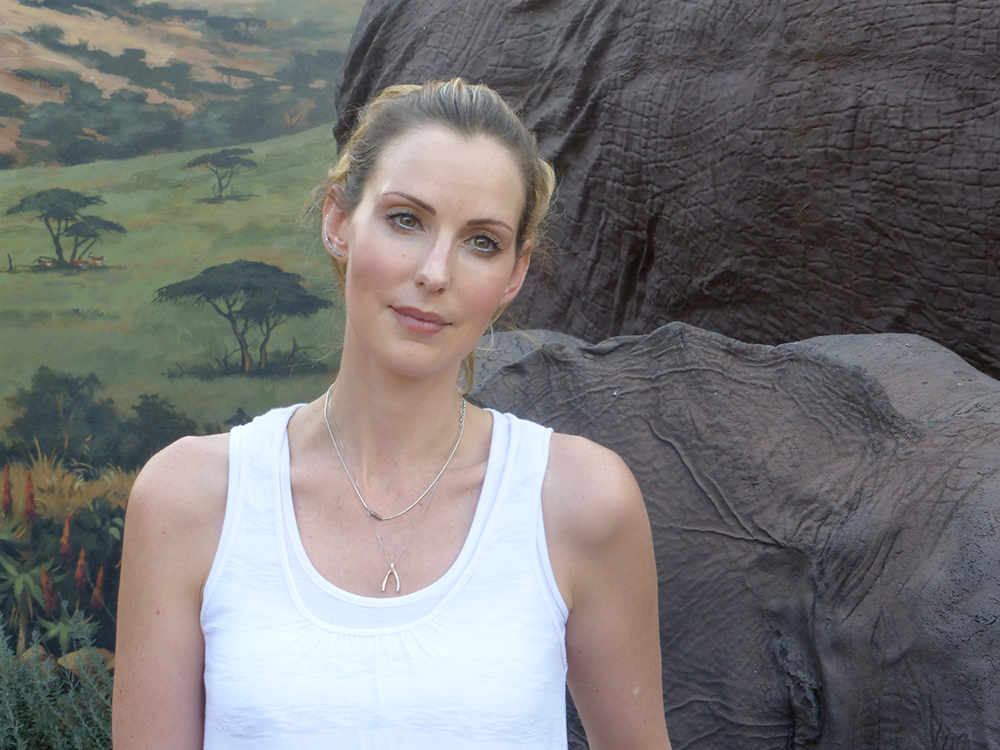 Lorinda Hern is the co-founder of the Rhino Rescue Project. (Photo: Bobby Bascomb)

BASCOMB: None of the Asian buyers want to risk their health by consuming tainted rhino horn so the poisoned horn is essentially worthless on the black market. However, if the procedure goes well the rhinos themselves never notice. Just as important as the horn toxicity, Hern says, is spreading the word that the rhino horns have been poisoned. Horns are only pink on the inside so it’s not obvious from looking at a rhino that it’s been treated.

HERN: So, what we rely on really heavily in South Africa we call it the bush telegraph. Elsewhere in the world you’ll probably call it the grapevine.

BASCOMB: Hern estimates that 90% of poaching crimes are committed with inside information from park staff or community members.

HERN: So, we actively involve them in the processes on all of the properties that we work. The staff are invited to come out, local schools are invited to come out, community leaders, the chiefs of certain clans. Everyone in South Africa has a cell phone so they actively are encouraged to take as many pictures as they want on these treatment sites and to distribute the word.

BASCOMB: To treat the rhinos they are first darted with a tranquilizer gun from a helicopter. Once sedated, the animals are laid on their sides where technicians drill 3 holes into the horn and inject it with the poison. The process takes about half an hour and Hern is the first to admit it’s far from perfect. Some rhinos die while under anesthesia and the process has to be repeated every 4 years when the poison and pink dye grow out of the horn.

BASCOMB: It’s late afternoon and starting to cool off as Hern drives around her family’s park, the Rhino and Lion Nature Reserve near Krugersdorp. She’s hoping to check in on some rhinos. 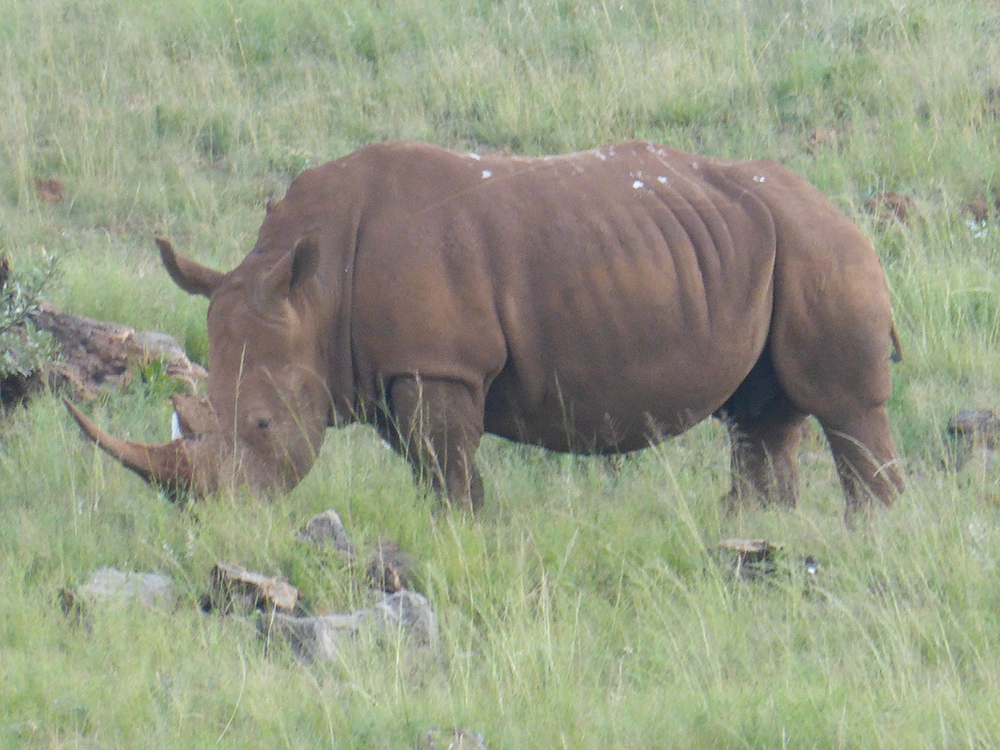 Wildlife insurance from companies like One Financial Services coupled with horn poisoning techniques can help save rhinos from poaching. (Photo: Bobby Bascomb)

HERN: And we should see them coming up on our left soon. Oh, there we go. Look at that!

BASCOMB: 5 white rhinos stand around a muddy watering hole where they’ve just been wallowing to cool off. Hern grew up on this property and knows all of the animals by name. She got started with the horn poisoning when one of her own family rhinos was killed.

HERN: It was a 25-year-old rhino called Queenstown named after the little town in the Eastern Cape where she came from. And I know all of these animals so well but half of her face is gone and I don’t know which one it is, I can’t even recognize her. That’s how badly she’s been mutilated. She was heavily pregnant at the time and with her baby, with her two-year old calf.

BASCOMB: For Hern protecting rhinos from poachers is a personal mission and her life’s work.

HERN: I can much easier live with myself knowing that if rhinos still go extinct it happened despite me and not because of me. I would hate to look future generations in the eye and have them ask me, “well what were you doing while rhinos went extinct?” And to have to answer, “well nothing. I thought someone else was taking care of it.” We don’t have that luxury. We are the people that should be taking care of it.

BASCOMB: Lorinda Hern won’t say how many horns she’s poisoned. She wants would be consumers in Asia to believe all South African rhinos are potentially dangerous. She admits of those she has treated 7 have been killed anyway. But in South Africa where 3 rhinos are poached every day, Hern considers 7 in 4 years to be a triumph by any standard.