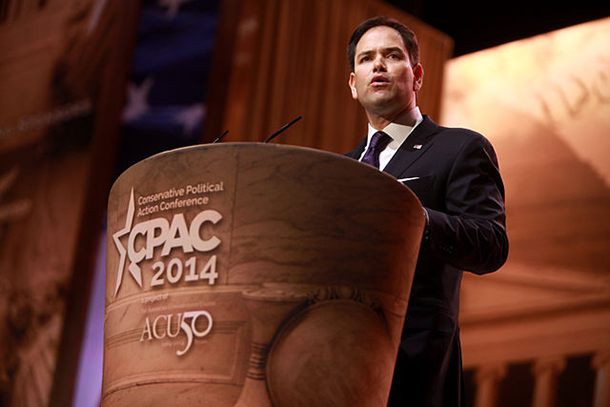 In an interview with ABC TV in 2014, Senator Marco Rubio said he doesn’t believe human activity is contributing to climate change, and said he doesn’t believe there are actions that should be taken now to address it, though he does see value in alternative energy and energy conservation. (Photo: Gage Skidmore; Wikimedia Commons CC BY-SA 3.0)

As the planet heats up, so does the race for the 2016 presidential election. The National Journal’s energy reporter Clare Foran talks with host Steve Curwood about leading Republican contenders and their views on climate change and how that could impact their viability as candidates.

CURWOOD: From the Jennifer and Ted Stanley Studios in Boston and PRI, this is Living on Earth. I’m Steve Curwood. As the 2016 race for the White House begins to click into gear, one issue that sets members of the crowded Republican field apart from one another is climate change. Recent polls show that the majority of Americans think climate change is happening, humans are playing a role, and the government should do something about it. But few of the Republican presidential hopefuls say the government should take action. To assess where the likely contenders stand, we turn now to National Journal energy reporter, Clare Foran, who looked at the records and statements of the field, and recently wrote an article called the "Guide to Republicans and Climate Change." Clare, welcome to Living on Earth.

FORAN: Thanks for having me.

CURWOOD: Now, Clare, you're familiar with the polls that shows the majority of the public would like to see their public officials taking action on climate change in one way or another. How does this perspective of the general public compare to the positions that various politicians and candidates have been taking on the issue? 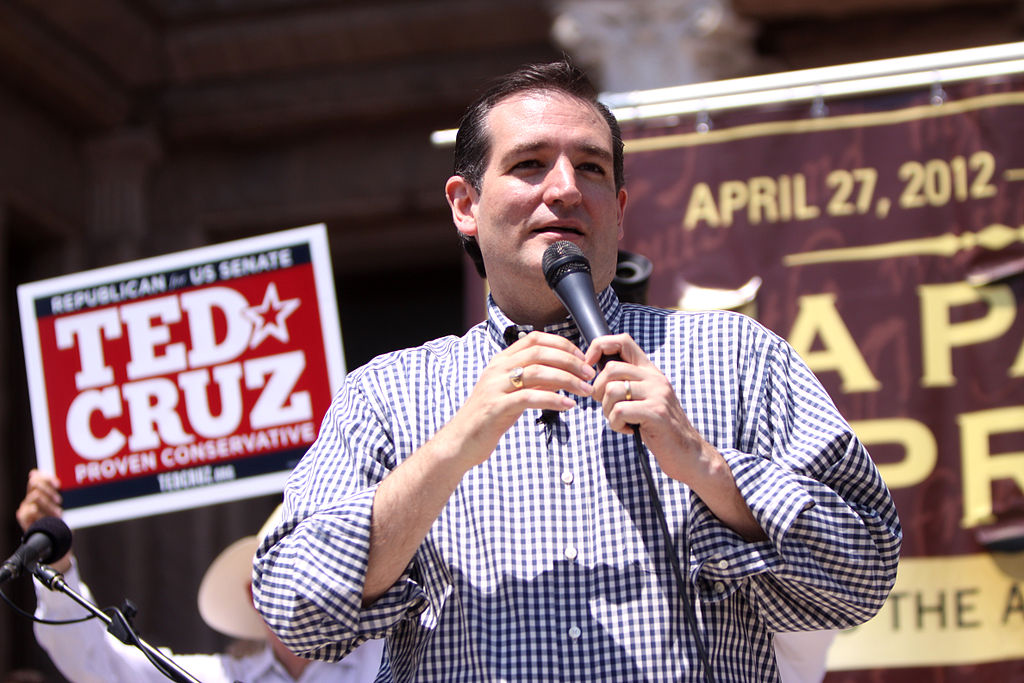 FORAN: Well, there really is sort of a drastic gulf between where the majority of American voters are and also the majority of Republican voters and where their elected officials are on this issue. Now, there is of course a marked split between Democrats and the Republicans in office right now when it comes to their stance on climate change and with likely Democratic presidential contenders like Hillary Clinton and Bernie Sanders, Elizabeth Warren, on the Democratic side there seems to be unanimous belief that climate change is real, human activity is contributing and we need to do something about it.

CURWOOD: And what about the Republican side?

FORAN: It's a completely different scenario. Most Republicans will say that the climate is changing right now, but that's about as far as they'll go. When you start asking whether or not human activity contributes to climate change and if we should do anything about that, most Republicans right now are sort of sidestepping or dodging that question. A lot of high-profile Republicans - so including people like Marco Rubio, Ted Cruz, Jeb Bush - they'll sort of say, "We don't really know if human activity is contributing," or, "I'm not sure," or, "That's an open question".

CURWOOD: Which of the Republican field is adamant that this is a hoax? 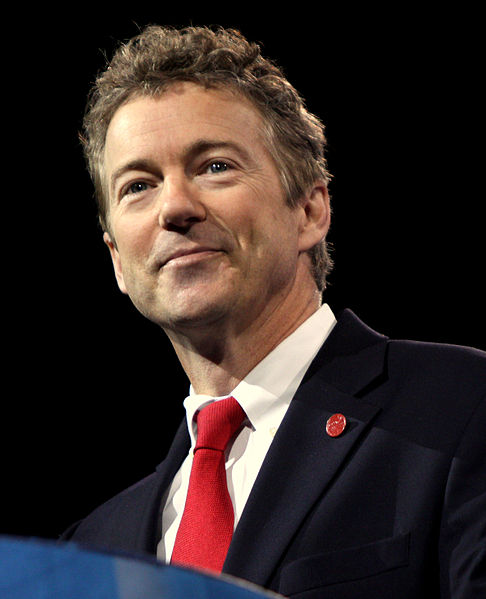 Senator Rand Paul says climate change is real, but is unclear what he would about it. While he is not opposed to environmental regulations that protect air and water quality, he sees the Obama administration’s power plant emissions caps as damaging to the economy. (Photo: Gage Skidmore; Wikimedia Commons CC BY-SA 3.0)

FORAN: You're really not seeing many Republicans saying that climate change is a hoax, which is a marked change from about a year ago. People are less willing to say that it's a hoax, but when you ask them what causes it that's where they start to dodge.

CURWOOD: Now, from your work, which of the Republican candidates for president, wanna-be or likely, are saying that we should do something about climate change?

FORAN: So there are several prominent Republicans that do say we should do something about it, but that being said, nobody has really offered a concrete policy proposal. But when we talk about Republicans who say we should act on climate change you're going to see people like Lindsey Graham, a Republican senator who said he's exploring a 2016 bid, Bobby Jindal has also talked about how we should do something to cut carbon emissions, and finally Chris Christie said that it's unequivocal human activity contributes. Sen. Rand Paul has also talked about how we need to cut pollution, but has been less definitive in what he means by that. 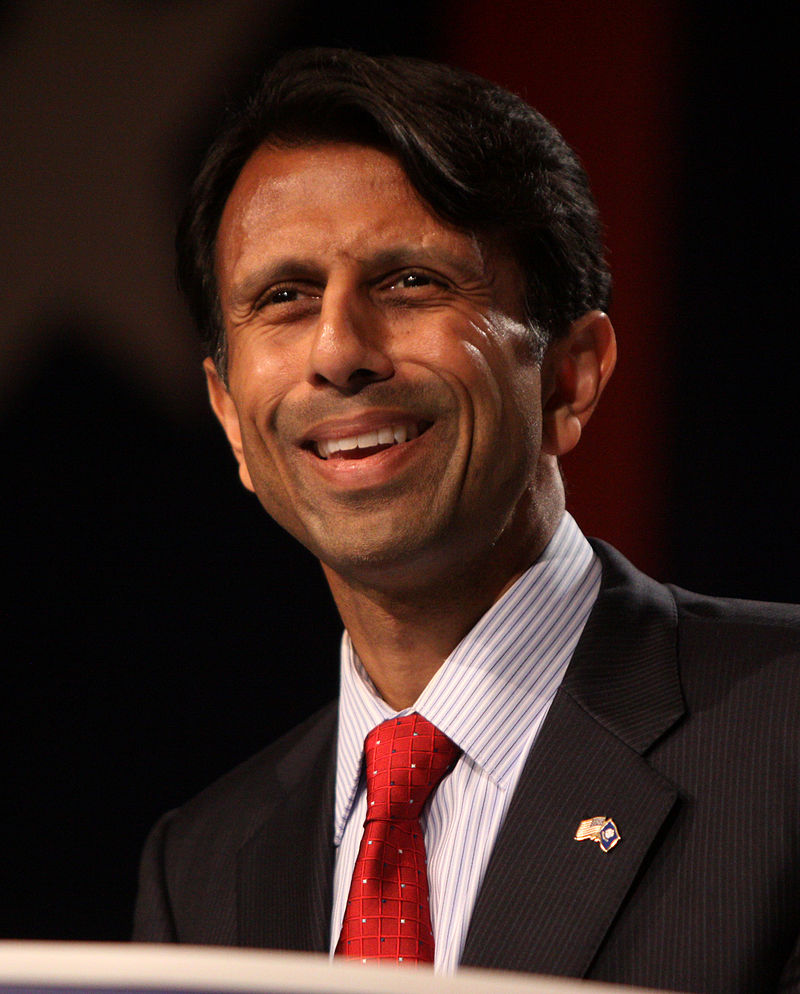 Bobby Jindal has said that we should do something to cut carbon emissions – but exactly what he thinks should be done is unclear. (Photo: Gage Skidmore; Wikimedia Commons CC BY-SA 3.0)

CURWOOD: So that's an interesting group of candidates there. We've got Bobby Jindal. Of course, Louisiana went through Katrina, and then Chris Christie that suffered through Superstorm Sandy and Lindsey Graham, of course, who had signed on to the cap and trade legislation with John Kerry when they were both back in the senate in 2009. So it's kind obvious why those folks would agree, but Kentucky's Rand Paul? Why was he jumping into this, do you think?

CURWOOD: It's very interesting that he is even talking about it because of course Kentucky mines a lot of coal. 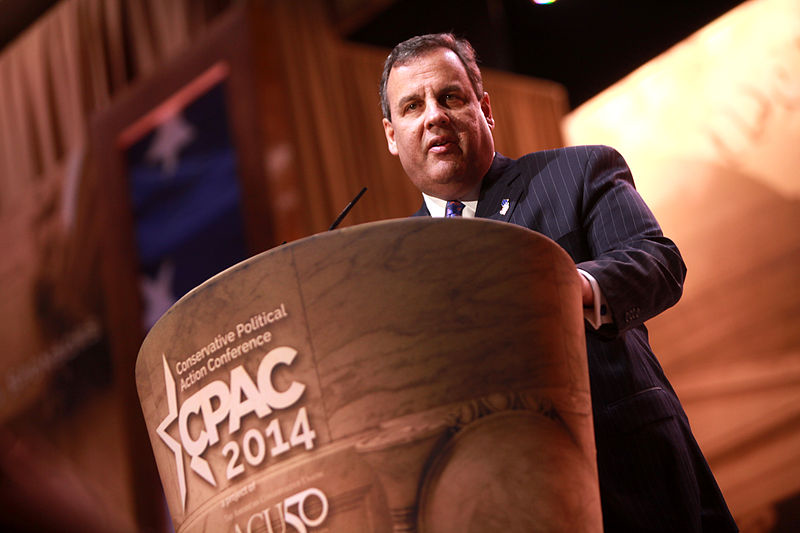 FORAN: That's true, and if Rand Paul were to stake out a position on this issue it could erode support for him in Kentucky where he faces reelection to the Senate in 2016, but on the other hand he's shown that he's willing to buck sort of the establishment Republican line on other issues like national security and drug policy and it's possible that he might do the same on climate change - it just remains to be seen. If he were to sort of eke out a position on climate change that is not hostile to government action to address it that might be a way for him to win over younger voters or even independents who polling suggests strongly would back a candidate who says we need to do something about climate change.

CURWOOD: Now, what about those Republicans who say they are unclear about the cause of climate change, and if anything should be done about it? Who is in that camp? 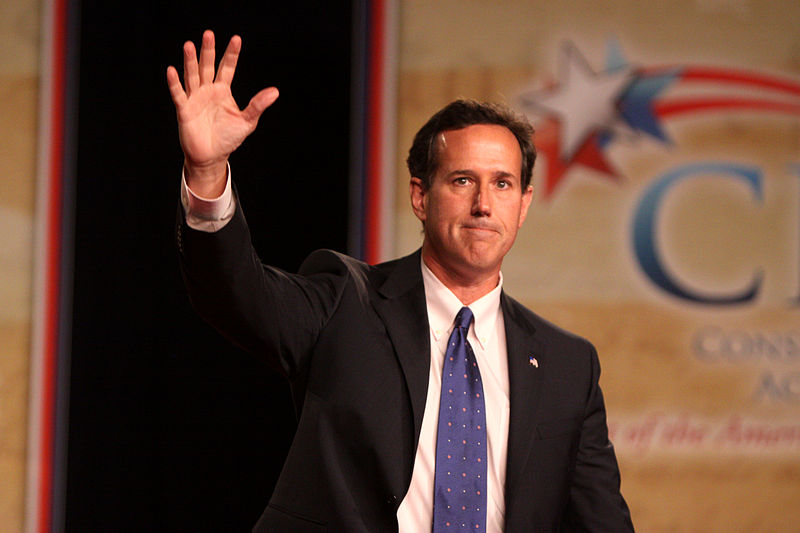 Rick Santorum has taken one of the most vocal positions against doing anything about climate change. (Photo: Gage Skidmore; Wikimedia Commons CC BY-SA 2.0)

CURWOOD: What about some of the other candidates like Scott Walker and Rick Santorum?

FORAN: Scott Walker has really not put himself on record at this point on whether or not human activity contributes to climate change and if we should do anything, but if you look at other actions he's taking, he's promised to fight tooth and nail against the president's regulations to curb air pollution and that the rule is going to have a devastating impact on Wisconsin. Then when you look at somebody like Rick Santorum, he's taken one of the most vocal positions against doing anything about climate change on the Republican side of the field. When asked by CNN should the United States do anything about climate change, Santorum replied clearly “no”, going on to say that action by the US is not going to make a dent when we have nations like China and India just belching out coal and air pollution.

CURWOOD: What about Rick Perry? I'm not sure he's getting into the race this time, but he has made some noises.

FORAN: Last year he said that he did not think that carbon dioxide should be called a pollutant. Perry also said last year that he's not a scientist, but in the short term he's substantially more concerned about national security issues than he is with climate change. 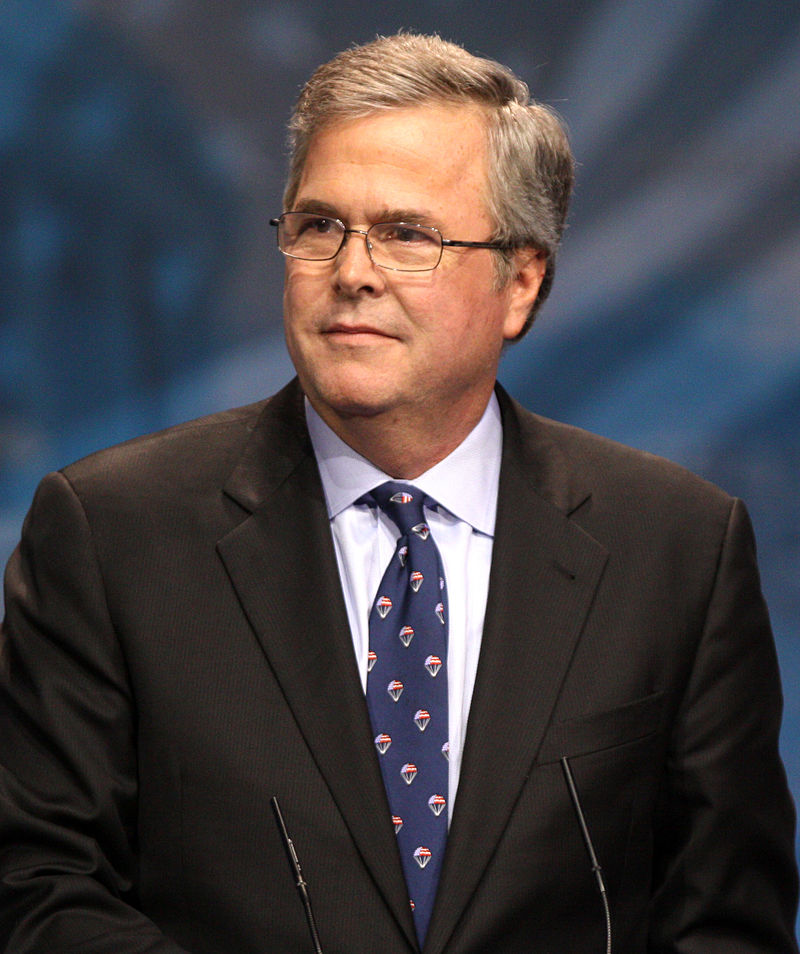 Jeb Bush’s position on action to deal with climate change is unclear at this point of the campaign, though he has stated it is real. (Photo: Gage Skidmore; Wikimedia Commons CC BY-SA 3.0)

CURWOOD: Clare, of course, you are a journalist, but just imagine for a moment that you are a political adviser to these Republican candidates. How would you suggest that they position themselves on the issue of climate to not only get through the primary process, but also be in a position to win the general election?

FORAN: So if they were to have a strong record on climate change saying that they support action to address it, in the general election that might be something that would help some ward off criticism from the Democratic contender, but for the primary it's a completely different landscape. Right now it's shaping up to be a very crowded Republican primary field. Strategists that I've spoken with that have said it's very likely that the different contenders will be looking for anything that they can attack other Republicans on, and if a candidate has started to eke out a record on climate change that that could really sort of land a target on their back.

CURWOOD: How much do you think at the end of the day voters care about climate in comparison the others issues that they might be voting about?

FORAN: It's a very kind of broad and intangible concept and it's the type of thing where when a pollster asks an American one-on-one, “do you care about climate change?" We do see that a majority of Americans are likely to say, "Yes, that is an important issue, and yes I'd like to support a candidate who wants to take action on it." But when you put that consideration up against a number of other priorities like jobs and the economy, it just really falls to the bottom of the list. 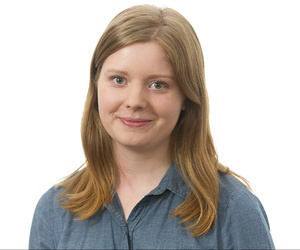 Clare Foran is an energy reporter at National Journal and co-author (with Andrew McGill) of “The Guide to Republicans and Climate Change.” (Photo: courtesy of Clare Foran)

CURWOOD: Which of the Republican candidates, if any, are touting the economic advantages of having new energy regime?

CURWOOD: What about the national security argument when it comes to climate change? The Pentagon has done some research showing that there's going to be some tough national security issues with climate disruption.

FORAN: The military has been saying for years that climate change could pose a significant national security threat, and at least in Congress, Republicans have really not jumped at the chance to fund research or really any kind of programs run by the military that would look into addressing climate change.

CURWOOD: To what extent do you think the unwillingness of Capitol Hill to address climate disruption contributes to public skepticism and lack of trust from members of Congress?

CURWOOD: Clare Foran is an energy reporter with the National Journal in Washington. Thanks so much for taking the time with us today.

FORAN: Thanks so much for having me.


“The Guide to Republicans and Climate Change”

“Most Republicans Say They Back Climate Action, Poll Finds”