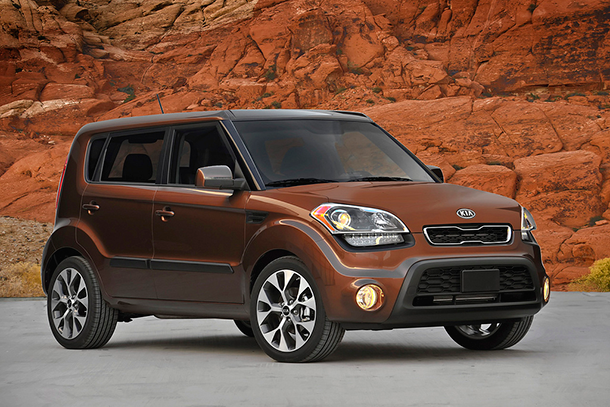 Kia reported that the Soul could get 6 miles per gallon more than it actually was. Out of all the models involved, the Soul’s MPG was over-reported the most. (Photo: loubeat; Flickr CC BY 2.0)

The EPA and Justice Department fined Korean automakers Hyundai and Kia for under-reporting their fleets’ greenhouse gas emissions in violation of the Clean Air Act. Host Steve Curwood discusses the fines and restitution the automakers must pay with Dave Cooke, a vehicle energy analyst for the Union of Concerned Scientists.

CURWOOD: Some of South Korea’s most popular cars, like the Hyundai Accent and the Kia Soul, haven’t been getting their advertised gas mileage. And it turns out that Hyundai and its corporate sibling Kia misreported MPG ratings and greenhouse gas emissions to the EPA. Last year, the companies paid out nearly $400 million to settle a lawsuit with consumers who bought the affected vehicles. And now, the faulty reports will cost the firms another $350 million in fines, require testing upgrades and forfeited greenhouse gas credits. It’s part of a settlement with the EPA and the Justice Department for violating the Clean Air Act. The Union of Concerned Scientists gave the Hyundai and Kia fleets its top green rating of cars on the market this year, so we called up the UCS vehicle analyst Dave Cooke to learn more. Welcome to Living on Earth, Dave.

COOKE: Thanks for having me.

CURWOOD: So what was the magnitude of Hyundai and Kia's over-reporting of their efficiency? How many cars are involved here? 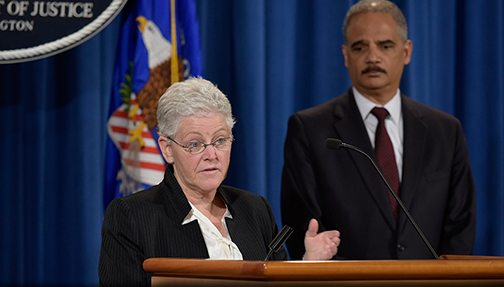 COOKE: It was more than half of their vehicles in the 2011 to 2013 model years, and so I think the last count was 1.2 million vehicles.

CURWOOD: And how far off the official ratings were they?

CURWOOD: I looked down the list of the various findings that needed to be adjusted, and what really caught my eye was the Kia Soul, made famous, by the way, by the Pope when he was in Korea, he rode in one - it's the tiny little car - and it looked like Kia had overstated the mileage by six miles per gallon. For a little car, that would be, I think, top of mind for somebody who is looking for vehicle, that instead of getting the 34 [miles per gallon] they were claiming on the highway it was getting more like 28. 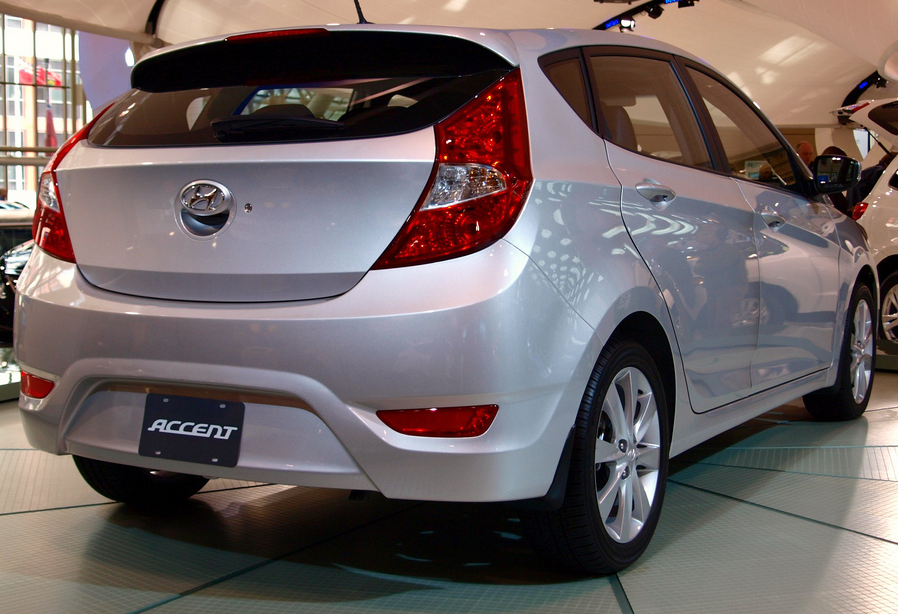 The Hyundai Accent’s MPG rating was over reported by 2 MPG for city driving and 3 MPG on the highway. (Photo: Michael Gil; Flickr CC BY 2.0)

COOKE: Yes, I would agree. Six miles per gallon is a lot. The amount of fuel that that would correspond to annually is significant, and if you're in the compact segment obviously fuel economy is something that you're already very concerned with.

CURWOOD: And so the end of the day, what did that mean for customers?

COOKE: Well, it would mean that customers were unfortunately getting shortchanged with their vehicles. Last year the two companies settled with consumers to pay out hundred of dollars to each purchaser of their vehicle for fuel that they weren't saving.

CURWOOD: So how exactly did Hyundai and Kia - and I gather they're really the same company at the end of the day - how did they understate their emissions to the EPA?

COOKE: So they share a testing facility and the practices at that testing facility did not meet EPA standard, and that ranged from things like only submitting the best test results, as opposed to the average test results, or using the wrong tires on the vehicle and that helped improve the test fuel economy that would have been submitted to the EPA.

CURWOOD: Now, of the $350 million or so in penalties that's going to cost them, break that down for me. Who's getting that money? 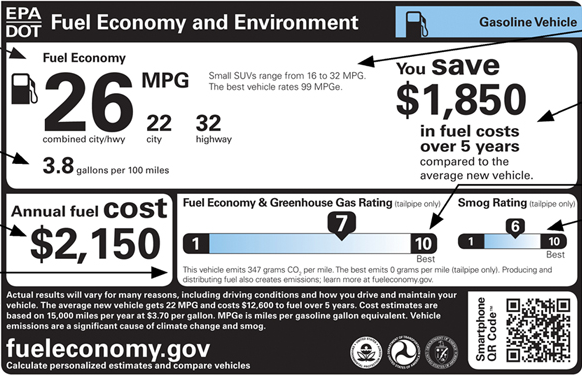 New car labels like this one over-reported the efficiency of Hyundai and Kia cars’ MPG. (Photo: EPA; CC)

COOKE: Well, so also actually there's really only $100 million that's the penalty for breaking the rules. The common number of about $200 million that's thrown around, really what this is are greenhouse gas credits that they had submitted to EPA, and that EPA said, "Well these vehicles aren't actually as good as you're saying. So we are going to take those away." So that's not really a penalty, that's just accounting for the actual vehicle’s behavior in the real world. And the last of the $50 million and that $50 million is new auditing procedures at Hyundai, new testing facilities, retesting of vehicles out to 2017. So that is really just to make sure this doesn't happen again, and it was required by EPA. So really the $100 million is what it is to say “You guys broke the rule of the system needs to be fixed, and $50 million will fix it, and we're going to count your vehicles appropriately”.

CURWOOD: So Hyundai and Kia especially have build their brand on being super green. They make cars with great miles per gallon. So what does this episode, these fines, what's that going to do to their reputation with consumers, do you think? 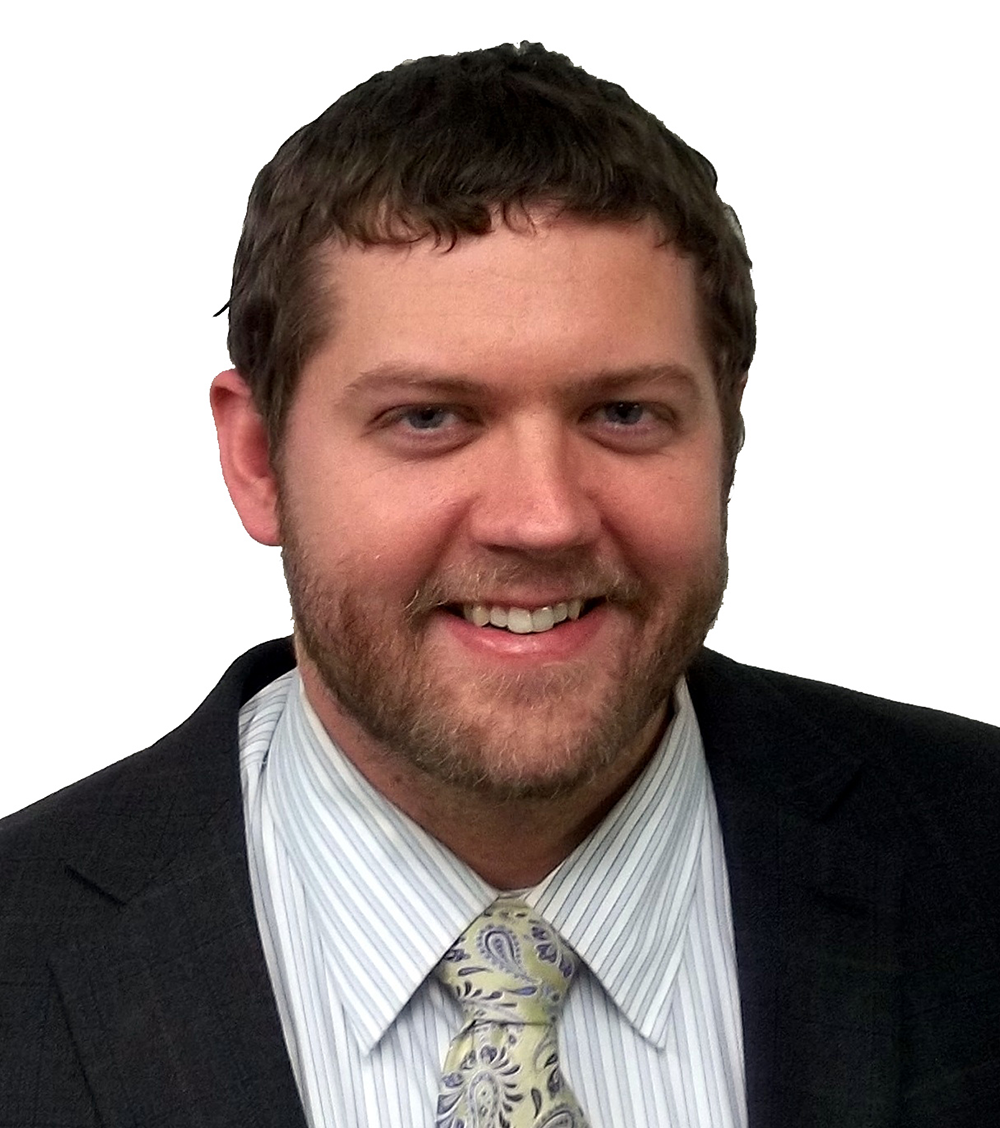 COOKE: It's hard to gauge. This first came to light in 2012. Hyundai Kia sales are doing fine. It certainly is problematic if I'm a consumer just thinking about fuel economy period. It does undermine your confidence in what the label says and I think this goes toward how consumers treat fuel economy labels generally. We found that Hyundai and Kia make the most efficient vehicles on average. At least did in 2013. That's why we named them the greenest automaker. The greatest tragedy is that if they had just appropriately represented their vehicle they wouldn't had to reimburse customers or the government and they could enjoy the fact that they've got the greenest fleet and are well on their way to meeting fuel economy and global warming emissions standards. There's a reason why Kia's announcement says they just want to move past it.

CURWOOD: Dave Cooke is a Vehicle Analyst for the Union of Concerned Scientists. Thanks so much for taking the time today.

COOKE: Thanks for having me. I really appreciated it.

CURWOOD: Asked for comment, Kia says their priority is making things right for customers and Hyundai’s CEO writes that despite the problems his company “continues to lead the automotive industry in fuel efficiency.”

There are links to their statements at our website, LOE.org.

The EPA’s press release about the settlement

Kia’s statement about the EPA settlement

Hyundai’s press release about the settlement, including a statement from Hyundai USA’s president and CEO

The EPA’s press release about the settlement

Dave Cooke of the UCS