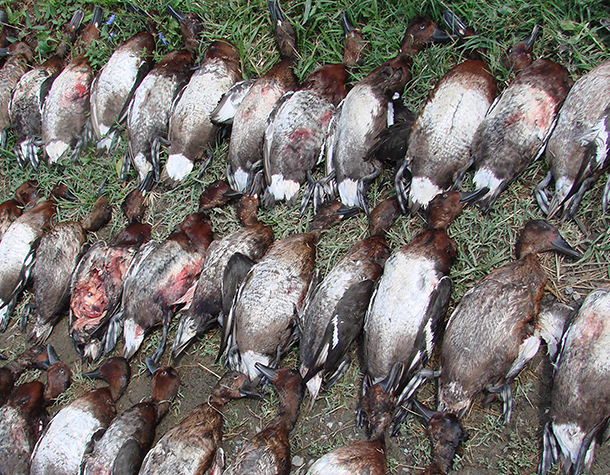 Ferruginous ducks. Historical records suggest there may once have been millions of these ducks in Albania. The last breeding pair was seen in the country in 2003. (Photo: © Martin Schneider-Jacoby/EuroNatur)

The marshes of Albania were once a vital feeding ground for migrating birds traveling between North Africa and Europe along the Adriatic Flyway. But as writer Phil McKenna tells host Steve Curwood, since the fall of the country’s communist leaders, an onslaught of poaching has left the skies eerily quiet.

CURWOOD: And now to a darker story of bird hunting. Millions of birds migrating between Africa and Europe are being illegally shot, many of them in the salt marshes of Albania along the Adriatic Sea. Phil McKenna is a freelance environmental journalist. He investigated this illegal slaughter, and wrote about it in Yale University’s online publication E360. Phil McKenna came into our studio to talk about Albania's killing fields.

MCKENNA: Albania’s often referred to as the wild wild east of Europe and in many ways it really is. So when I went there it was astonishing to see. You don't see birds in the sky. In parts of Albania you don't even see trees on the ground. It's just really the natural resources there have just been under assault for decades now.

CURWOOD: So, let's do a little geography lesson here. Albania is on what flyway for birds?

MCKENNA: Something called the Adriatic flyway. Albania and the Balkans are really a funnel between Europe. So you have birds coming from north, central, eastern Europe all funneling down all through the Balkans along the coast of Albania along the Adriatic Sea before they cross the Mediterranean and then crossing the Sahara down to the Sahel region of Africa where they will spend the winter. 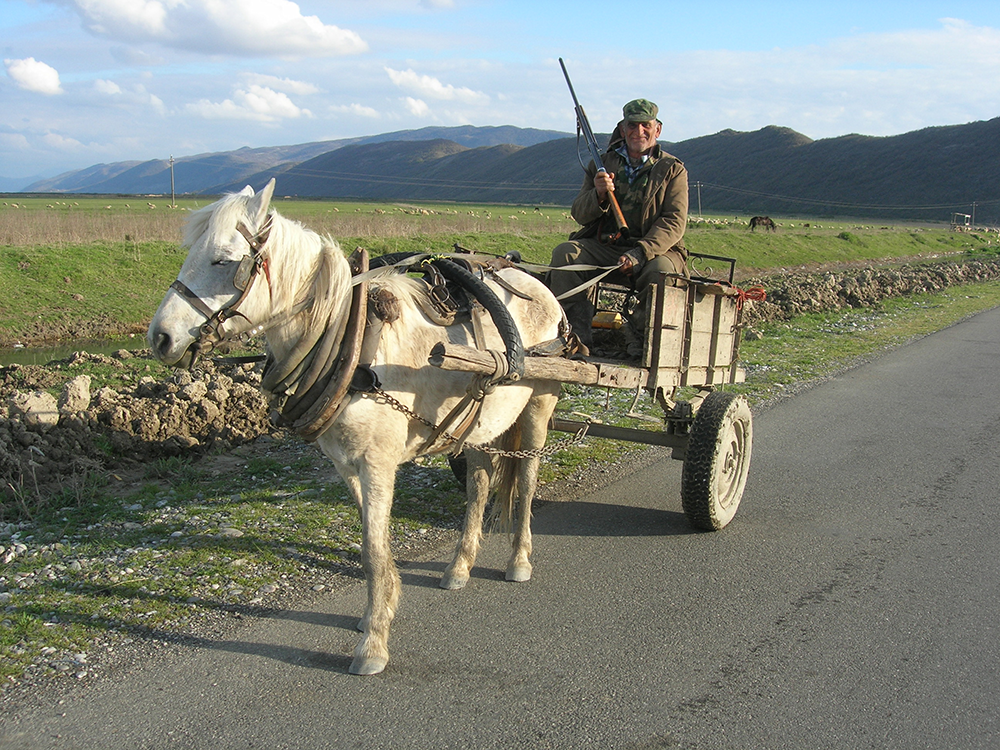 CURWOOD: What kind of birds are being hunted along this flyway?

MCKENNA: Anything that flies. So really, yeah, waterbirds, ducks, geese, shorebirds. We saw a Marsh Harrier when I was there - one of first birds we saw - and the biologist I was with pointed it out and then quickly said, "It won't last a week in this marsh." It's amazing when you go there. The habitat is excellent yet empty. Right now what happens is that a lot of birds know that if they go in there they're going to be shot and they'll stay out at sea. They need to come in, they need to eat, but they know that the risk is too great. And was happened most recently is Albanian hunters will now get in their speedboats and they will race to them in the open ocean and start shooting there.

MCKENNA: Yeah, which is completely illegal and completely foreign to think of as bird hunting here. One of my sources said, you know, "This isn't bird hunting, this is massacre."

CURWOOD: Most people, when they think about poachers, they're thinking about big game hunters in Africa looking for rhino horns or ivory. Who are the Albanian poachers? 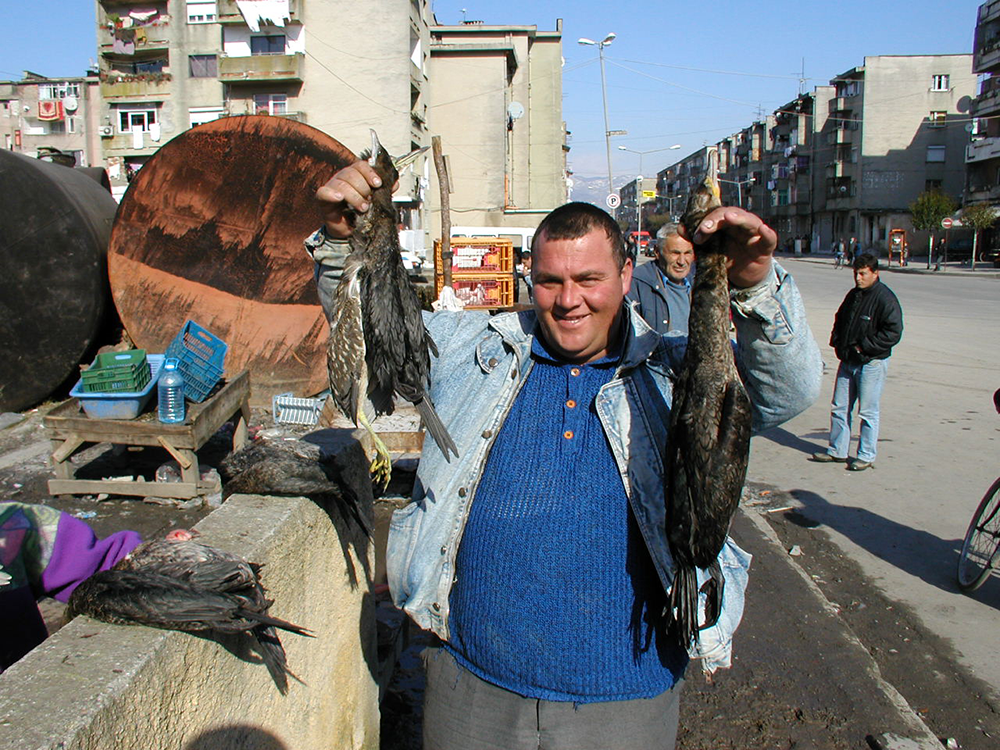 Ducks and other water birds are a common sight in the markets of Shkodra, Albania. (Photo: © Darko Savelijic)

MCKENNA: It all started during the communist era in Albania. You had these millions of birds migrating through each spring and fall and they were completely off-limits, even the marshes oftentimes were off limits to the Albanians. Albania was one of the most repressive countries in the world during the communist era, and the leaders of the country were all into bird hunting and would go into these reserves set aside just for them. They were the only ones who are allowed to hunt. When all of this came crashing down in 1991, all of the Albanians wanted to do what their leaders had been able to do, use kind of this forbidden fruit. So guns started flowing into the country - everybody got one - and they all started going into the marshes and wetlands trying to shoot birds.

CURWOOD: Now, elsewhere in the Adriatic, I'm thinking of other countries, Italy, etc., there are pretty tight restrictions on shooting birds I gather? 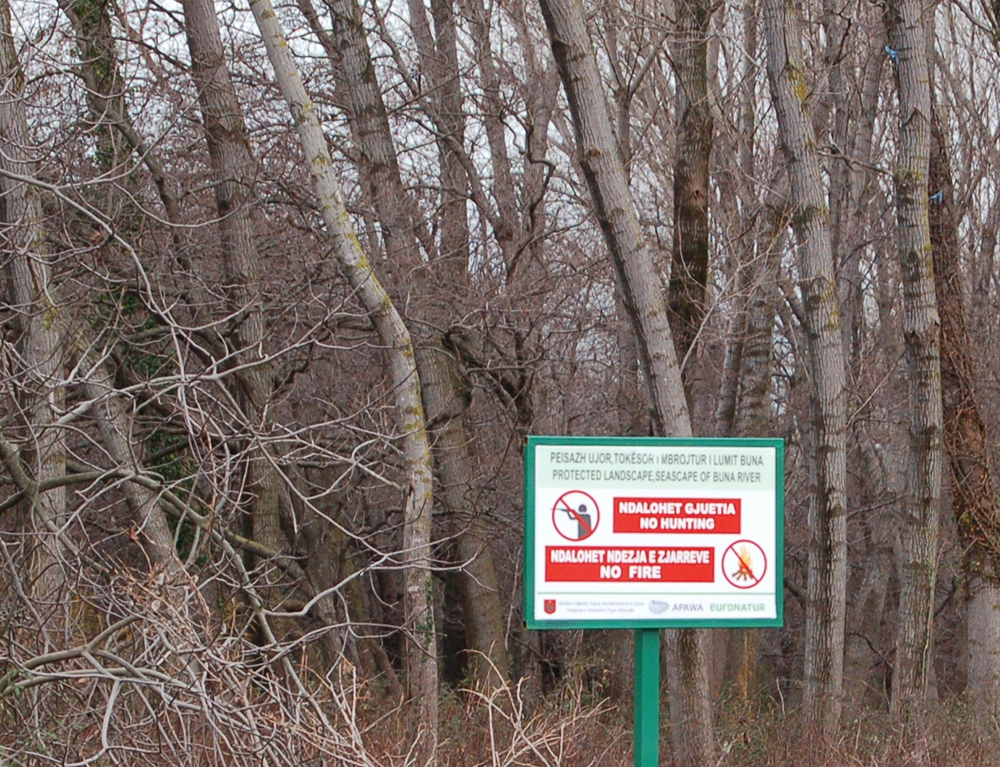 MCKENNA: There are, getting more so each year, and there's also this great tradition especially in Italy of birds and cuisine, eating birds, songbirds, you name it. So what happens now is a lot of Italian hunters who want these birds, want to shoot these birds, will come on these hunting vacation packages to Albania where they will come and have unlimited hunting for three or four days, taking back hundreds and hundreds of birds.

CURWOOD: Wait, you're telling me that this is a tourist phenomenon?

MCKENNA: About one in five hunters in Albania is thought to be an Italian, or at least that was the case until earlier this year when Albania announced a two-year ban on all hunting nationwide. We know that this ban isn't entirely effective, but the thought is that it's at least putting a significant dent in the number of foreign tourists coming into the country. 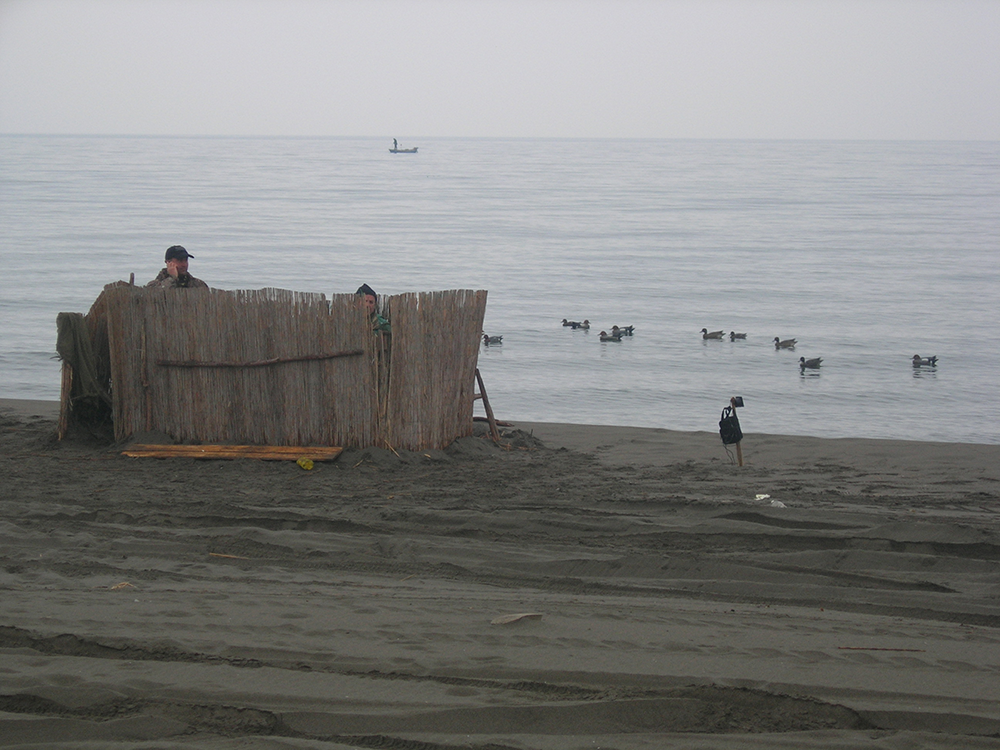 Poachers throughout the region use bird decoys and play tape-recorded bird calls to attract birds. Other tactics employed by illegal hunters in Albania include hunting inside national parks and other protected areas, hunting at night when birds flock together, using nets and glue sticks to catch song birds, and chasing ducks and other water birds in speedboats at sea. (Photo: © Martin Schneider-Jacoby/EuroNatur)

CURWOOD: So, what did people do with these birds once they kill them?

MCKENNA: I think a lot of it's just for the sport of shooting. Some may not even be eaten. There's also a very thriving market for cuisine. I went to very high-end restaurant in Tirana, the capital of Albania, very close to the US embassy, where they were selling mallards, they were selling something, blackbird, Woodcock for $18, $20 a pop.

CURWOOD: So what has been the impact of hunting on all the bird populations there? 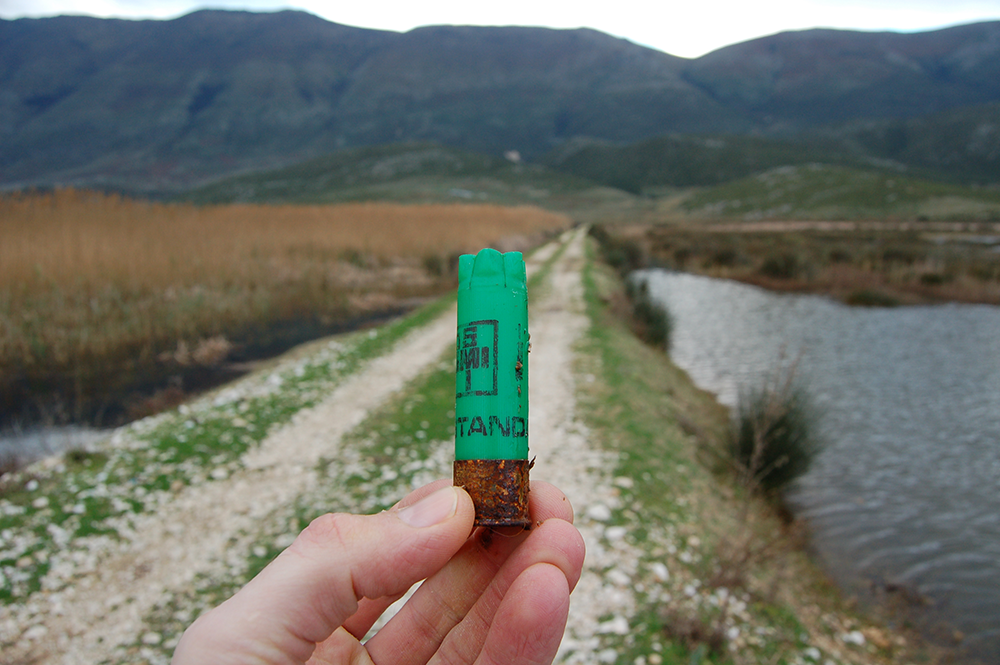 MCKENNA: Well, we know in a greater flyway called the Mediterranean Black Sea flyway, one third of all birds going through the region are in decline. We also know that a couple of species, the Slender-billed Curlew, which is this very graceful wading bird, is likely extinct. One of the last ones was seen just across the border of Albania and Montenegro in 2006. Another bird, the Ferruginous Duck, this very pretty reddish sort of chestnut brown duck, once likely numbered in the millions passing through Albania, now is entirely extinct within Albania.

CURWOOD: You say the Albanian government has put out a hunting moratorium in place. How effective has that been so far? 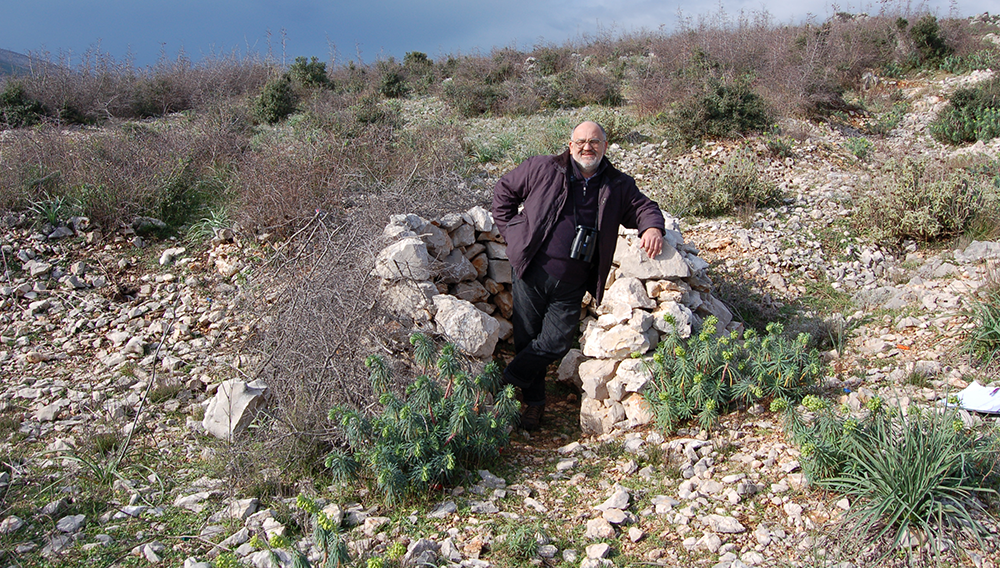 Peter Sackl of Universal Museum in Joanneum, Austria stands in a limestone bunker. Hunting hides such as these are commonly found within officially protected areas along Albania's coast. (Photo: Phil McKenna)

MCKENNA: From all accounts that I hear it hasn't been effective at all. There's this large conference, the Second Adriatic Flyway Conference, and during the conference a number of the attendees, they went out to one of the nearest national parks, and while they were there in the middle of the day, not the best time for hunting, but yet they still heard gunshots.

CURWOOD: How about when you visited? What did you hear or see?

MCKENNA: I heard the same. I saw, like I said, very few birds. In the beginning of my trip in northern Albania; towards the end I went down to southern Albania with Taulant Bino, he's the former environment Deputy Minister of Environment in Albania and the country's leading ornithologist. He took me to some spots that were still quite well protected, but yet even there we were hearing gunshots throughout and shotgun shells were littering the ground. And at one point it was like paving stones, these multicolored shotgun shells all over. 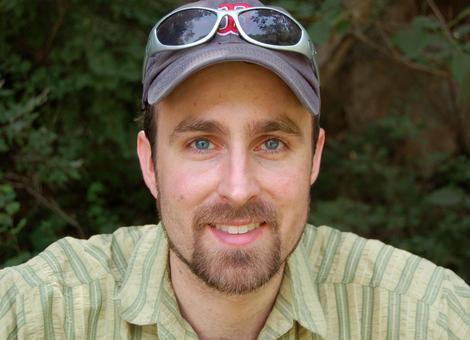 CURWOOD: Now, what about the conservation groups, the nongovernmental organizations. What are they doing there?

MCKENNA: A lot of this is led by EuroNatur, which is a German conservation group. They are very concerned because they rightfully view these, not just as Albanian birds but as Europe's birds, and they're being killed in Albania. They want to go to Albania and protect them.

CURWOOD: Now in your piece you mentioned that Albania is a candidate for admission into the EU, the European Union. How does all this slaughter of birds affect that issue?

MCKENNA: Right. Officials I spoke to at the European Commission were very concerned about this issue. They attended the recent Adriatic Flyway Conference and told me, quite frankly, if Albania doesn't clean up its act this could be a stumbling block entry into the EU.

CURWOOD: So, Phil, how do you think this is going play out in years ahead?

MCKENNA: My hope is that we're really at a key point now with the European Commission looking very closely at what's happening in Albania. My hope is that they will find a way to kind of force upon Albania or maybe help them to better protect birds. On paper, Albania has great protection for… for birds and other wildlife. It's really when you get down to what's happening on the ground that things need to change. And part of that is Albania is still a very poor country. They don't have enough fuel to put in their trucks, for the rangers to go to patrol the parks. There may be a solution, where the European Commission, the European Union finds a way to fund Albanian rangers to go out and do their jobs.

CURWOOD: Phil McKenna is a Freelance Environmental Journalist. Thanks for taking the time with us today, Phil.

MCKENNA: Steve, thanks for having me.