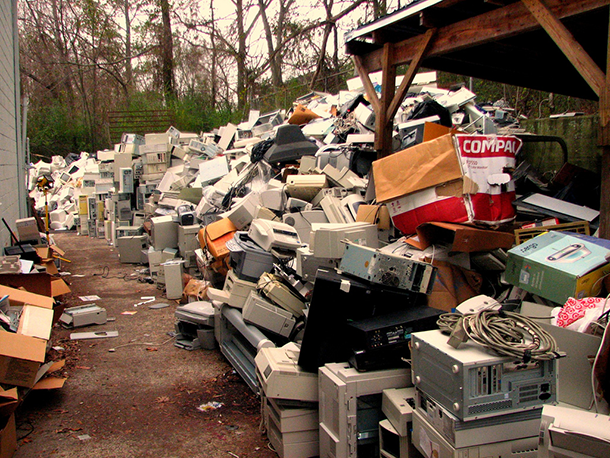 80% of e-waste in the United States ends up in landfills overseas (Photo: Curtis Palmer; Flickr CC2.0)

Discarded electronics are one of the fastest growing waste streams in the world, and a new survey from Best Buy found that only about 40% of people in the United State recycle old computers, TVs and phones, even though Best Buy and Staples are among companies that will take it for free. Most of the e-waste ends up in landfills, but as John Shegerian, CEO of Electronic Recyclers International tells Living on Earth’s Helen Palmer, it can be recycled safely and responsibly.

CURWOOD: Many of us have clunky old TVs, or obsolete computer clutter. And despite good intentions, chances are when we finally get rid of it, we won’t recycle it, according a survey by Best Buy. And e-waste in the dump can leach toxins into the environment. So some companies including Staples and Best Buy subsidize electronics recycling and take e-waste for free. To find out more, we called up John Shegerian, CEO and Co-Founder of Electronic Recyclers International. He spoke with Living on Earth’s Helen Palmer.

PALMER: Tell me, first of all, there’s this recent survey from Best Buy which noted that only a third of people, just over a third, actually manage to recycle any of their electronics, though about two-thirds really want to. What gets in the way of actually recycling this old electronic junk?

SHEGERIAN: Well, what gets in the way of most people recycling is apathy, or lack of accessibility or knowledge. But once people know how to recycle, where to recycle, most people want to do the right thing. And recycling rates therefore are rising. Best Buy has seen their volumes go up year after year with their great recycling program, which they pioneered in about 2007. And so, to me, it's very encouraging that retailers like them have created a new recycling paradigm making it accessible for the public at large and they've led on that and others have followed.

PALMER: Yes, I believe Staples as well takes recycling...I don't know who else does. 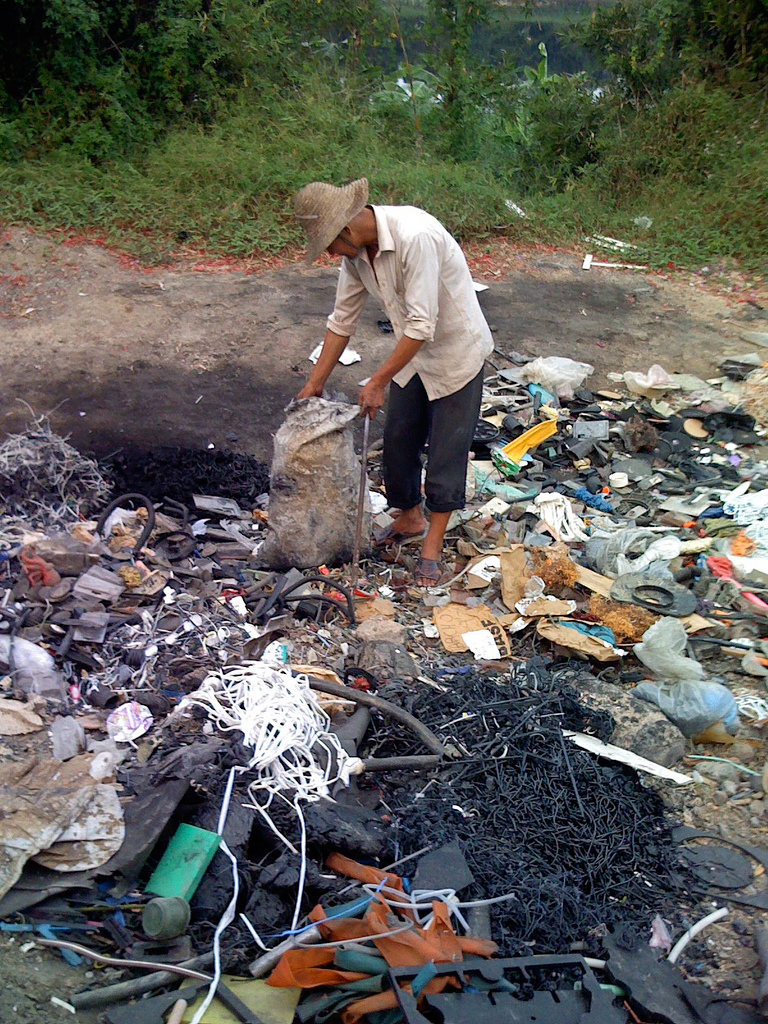 Guiyu, China is one of the biggest e-waste dumps in the world. Villagers dismantle electronics often in unsafe conditions in search of precious metals (Photo: Bert van Dijk; Flickr CC 2.0)

SHEGERIAN: Well, you're right. Staples and Best Buy are the platinum standard because not only do they take old electronics back, but they also have announced publicly that they only allow responsible recyclers who are certified to touch those electronics, and that's a very, very important point.

PALMER: So when you say you recycle everything, what kinds of things come out, I mean, is there value to be had from these old electronics so that you can actually realize?

SHEGERIAN: Well, there's value to be had, yes. Everything gets commoditized, so you break down electronics into plastics, glass, and metals, and all that material gets sent off to smelters for a new life. The glass costs us money to dispose of, the metals and the plastics we sell.

PALMER: So give me a ballpark figure for what you would actually charge someone for a ton of e-waste.

PALMER: So, tell me of a little bit about the irresponsible people. How does it actually come about that actually e-waste ends up going to iresponsible recyclers?

SHEGERIAN: OK. So, if you work for the government or you work for a big corporation, they say, "Hey listen. Your job is to save us money. Your job is to do more with less resources." So now they have a choice. "Hmmm, this one recycler who came in and he quoted me twenty-five cents a pound, I have 100,000 pounds to get rid of - wow - that's going to cost me a lot of money. But there's another recycler down the street, ABC recycling, they said they’d come pick up the stuff for free and just take it off. I'll just call up ABC Recycling." And ABC Recycling comes, picks up the material, and they sell this material to the highest bidder. 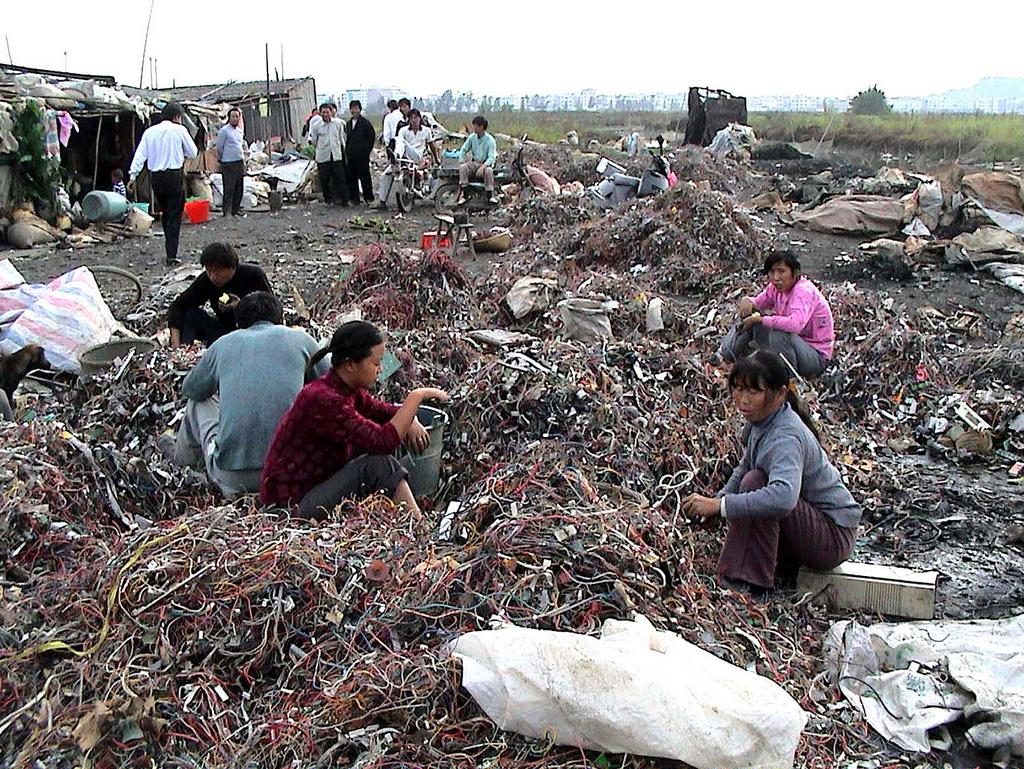 SHEGERIAN: Back in the early part of 2001, 2002, 2003, the highest bidders typically were the people who wanted to mine the gold, the silver, the precious metals out of the electronics. So they would bring that electronic then, they'd buy it and bring it over to some part of China or some part of India or Africa. They don't have the right tools so they would burn the plastic of the carcass off of it so that would throw a toxic and poisonous gas into the air and then little children typically would be co-opted into the process of doing acid washes to gain the precious metals out of these electronics. Well, first of all there's human rights violations being done by co-opting children into this, and then people would get injured using these acid washes.

SHEGERIAN: That story still continues, but that story has taken on even a darker turn. Now, the highest bidders, in many cases, are people who have adverse interests to our homeland security in the United States who just want to buy the electronics from the government and from large corporations just to pull out the hard drives and reverse engineer the information and then they just dump the carcasses into rivers, lakes, the ocean or the desert. So that's what's happening with still approximately 80 percent of the electronics that we are using in this country are still being shipped off shores and one of those two options are happening to it right now. 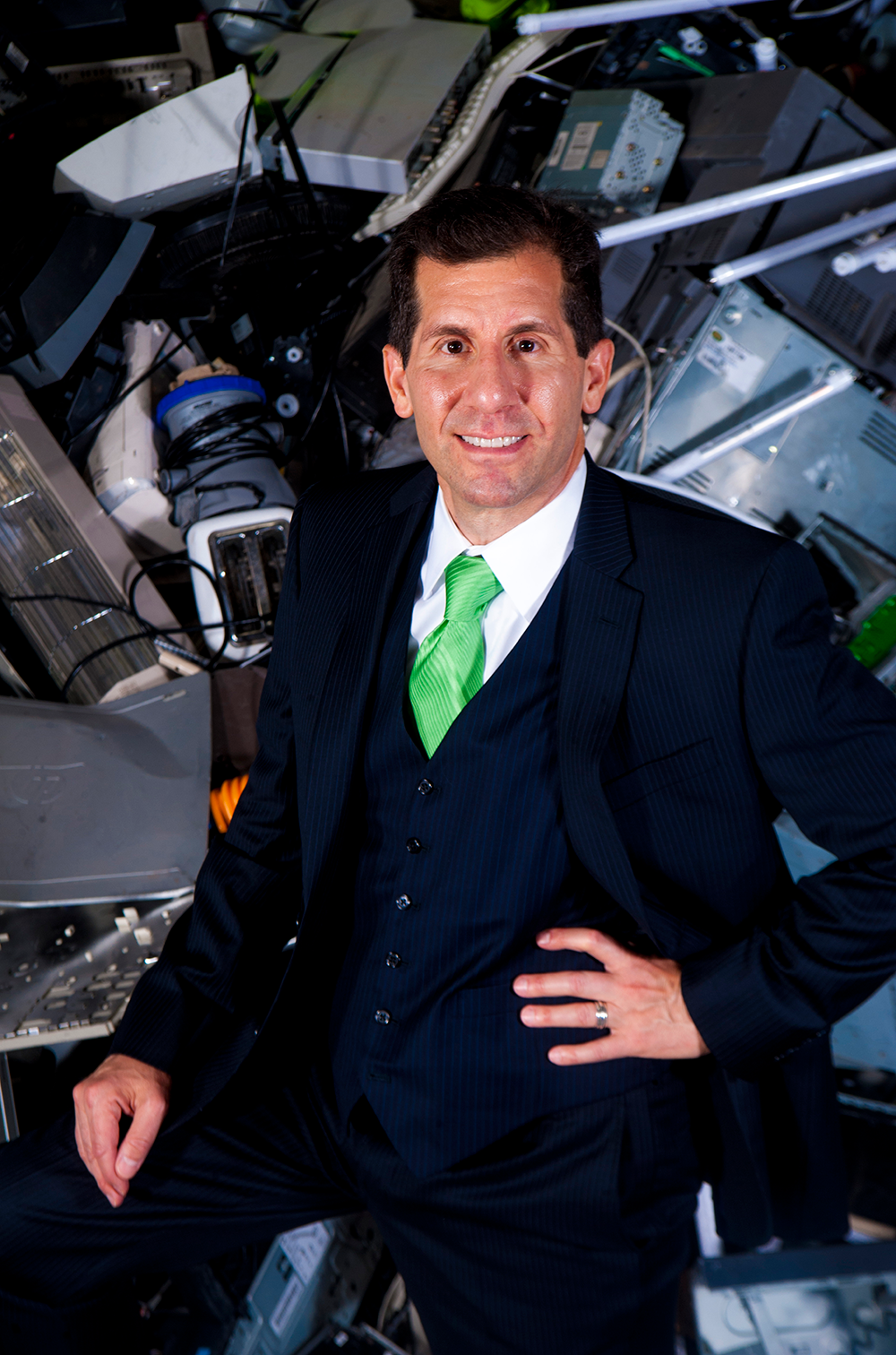 SHEGERIAN: Well it's a great question, and the bottom line is: we've built the world's largest shredders. So your hard drive would go into our shredders for ultimate destruction and then the metals that come out of that would go directly to our smelters.

PALMER: What of the various electronics are the hardest to recycle?

SHEGERIAN: Right now, the hardest things to recycle are tablets because they're built so seamlessly. You know, they're very airtight and built so perfectly they're the hardest today to recycle. They're still recyclable, but they're typically the hardest.

PALMER: So the things that we like about them, their sleek design is exactly what makes them really difficult to recycle?

PALMER: You got it. That's exactly correct.

CURWOOD: John Shegerian is CEO and Co-Founder of Electronic Recyclers International. He spoke with Living on Earth’s Helen Palmer.