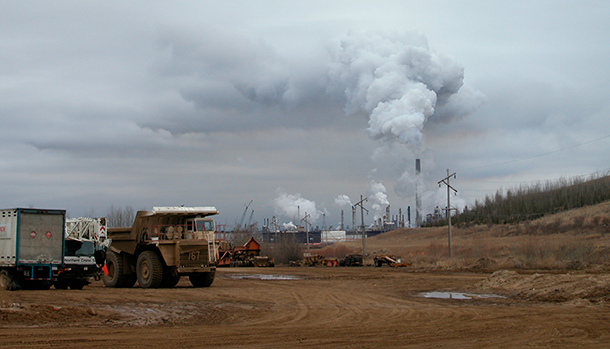 With crude prices sharply down and the future of the Keystone XL pipeline in doubt, energy companies are dubious about investing in oil from the Alberta Tar Sands. OnEarth writer Brian Palmer discusses the problems facing the industry with host Steve Curwood.

CURWOOD: From the Jennifer and Ted Stanley Studios in Boston and PRI, this is Living on Earth. I’m Steve Curwood. The price of oil has been plummeting, down some 25 percent since June, and as we record this show, the price per barrel is near $80 dollars. Motorists and freight haulers see this as good news, but cheap oil encourages consumption, and over the long term that’s not such good news when it comes to cutting global warming gas emissions. Still, opponents of the proposed Keystone XL pipeline to carry tar sands oil to market from Alberta, Canada are seeing a benefit from the slump in oil prices, which makes it harder to make a profit. Uncertainty over Keystone and questionable returns recently prompted the Norwegian oil giant Statoil to halt its tar sands plans. Brian Palmer, a writer for OnEarth Magazine, has been following these developments. Welcome to Living on Earth.

PALMER: Thanks for having me, Steve.

CURWOOD: Brian, tell me, why did StatOil pull out of tar sands?

PALMER: Well, there's the kind of corporate press release, and then there is a kind of a lot of reasons kind of behind it. They did specifically mention changing market conditions and limited pipeline access, and what limited pipeline access means in corporate speak is the lack of the Keystone pipeline. The Keystone XL pipeline is crucial to tar sands projects in northern Alberta becoming profitable. 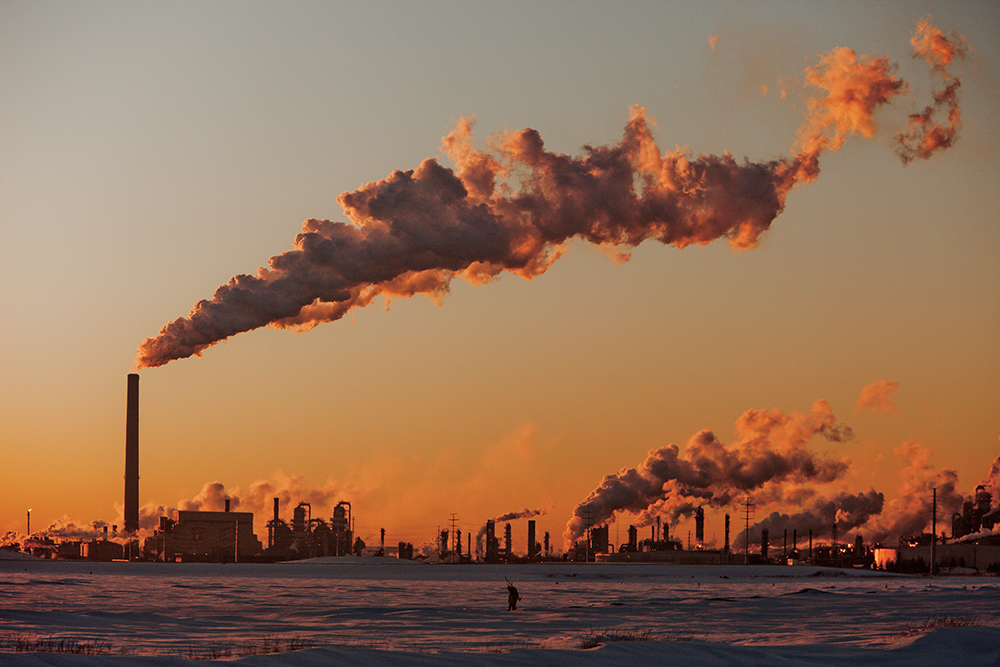 Pollution from industrial development in the Tar Sands region of Alberta (Photo: Kris Krüg; CC BY 2.0)

CURWOOD: Well, but Keystone is still on the table. It hasn't been taken completely off the table.

PALMER: That's true, but they need to do their long-term planning. As of a couple of years ago, I think most of the energy executives thought of the Keystone pipeline as something that had been postponed for political reasons, but once we kind of got out of election season, to the extent we have a non-election season any more, it would be approved. And we would kind of move forward no matter who was is in the White House. But environmentalists have been so successful in postponing it that a lot of oil companies are now worried that it's never going to happen, and if it's never going to happen, making a long-term commitment to a tar sands project is a kind of iffy proposition.

CURWOOD: Now, we're in the middle of a precipitous decline in price of crude oil. As we're recording this, the price of crude is down $81 dollars a barrel. How does that impact the viability of tar sands oil? 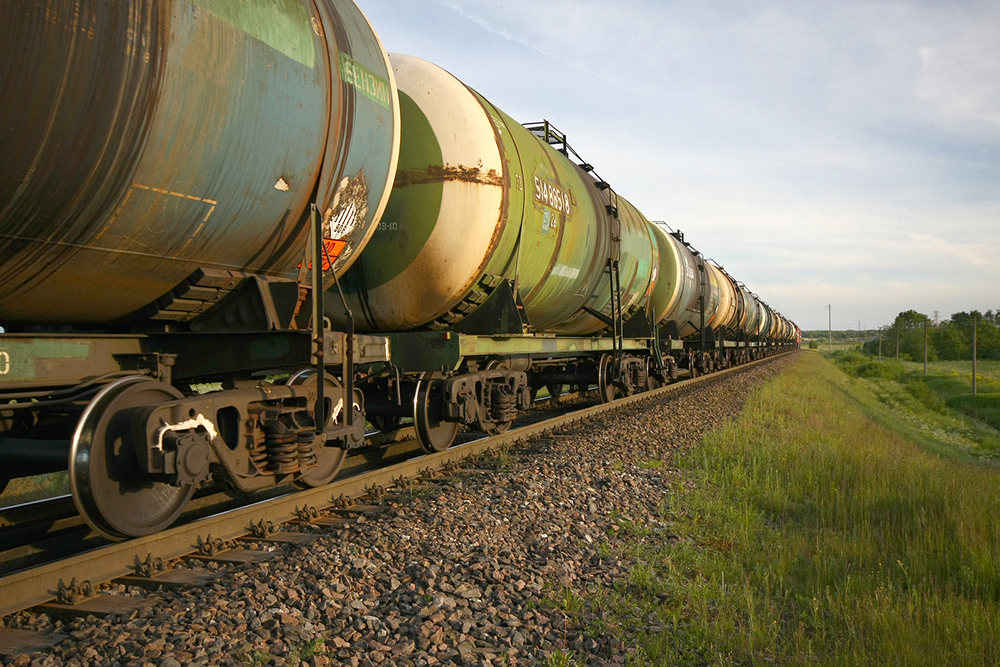 Right now, much oil from Alberta is being transported to markets by train. (Photo: Bigstockphoto)

PALMER: So, to understand this you need a bit of background. Tar sands oil is a kind of a cheap low-quality version of crude oil that comes from a very specific and remote location. Extracting tar sands is nothing like drilling for oil; it's much more like mining. So you need to move huge amounts of equipment out there to get the tar sands out of the ground. You need more equipment to separate the bitumen, which is the stuff that actually makes oil, from the sand and clay that it's stuck in, and then you need even more equipment to cook that down and turn it into something that vaguely resembles crude oil. When all of that is done, you still have to get the stuff to a refinery.

There are limited places that are refining oil in North America right now. The two best places to ship crude oil from Alberta are probably the upper mid-western United States and the Gulf of Mexico, and getting it there is a challenge. As of right now, it costs about $25 dollars per barrel to move tar sands crude from Alberta by rail to the Gulf of Mexico. If they had a pipeline, say, something like the Keystone XL pipeline, they could cut that price from $25 down to $9 dollars. That’s a huge difference. Now, because tar sands, as I mentioned, is a much lower quality version of oil, of crude oil, it sells at a discount, something like $20 to $30 dollars less than conventional crude. So with conventional crude in the 80s, tar sands crude more like in the 60s, maybe even a little bit less than that. If you can only get something like $60 to $65 dollars for your barrel of oil, having to pitch in an extra $15 to $20 dollars to move it by rail right now, rather than pipeline, will turn a marginally profitable business into a completely unprofitable business and that's scaring oil producers off of tar sands projects right now. 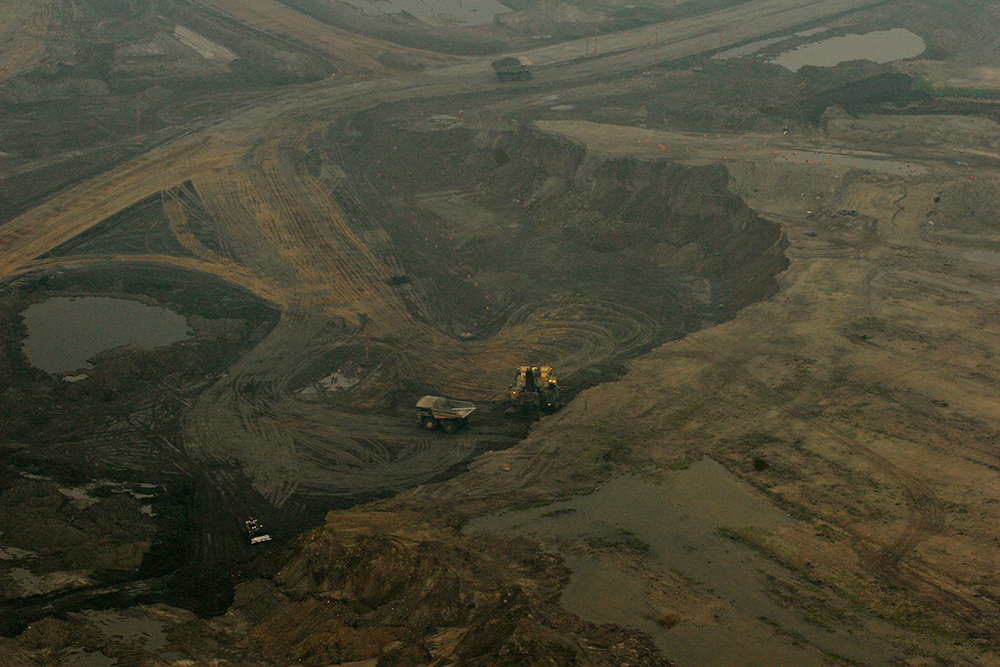 Getting oil out of tar sands bitumen is expensive. Brian Palmer says it could be called oil mining. (Photo: Julia Kilpatrick, the Pembina Institute; CC BY 2.0)

CURWOOD: So this delay then, on the Keystone XL pipeline decision from President Obama, is essentially making the difference to the economies of this industry up in Alberta.

PALMER: Yes, and there are several factors. As you mentioned, the price of oil has dropped. The cost of labor has risen because Northern Alberta is like the kind of place that John Denver sang about - it is very, very remote. Getting people to move there costs money, and when you want to expand, you're trying to convince more and more people who are not that enthusiastic about moving there to go, you need to offer them higher and higher salaries, so labor costs are going up. So, there are a variety of factors, but there's great evidence to support the idea that the Keystone pipeline is the kind of difference between having new tar sands projects and not having new tar sands projects. 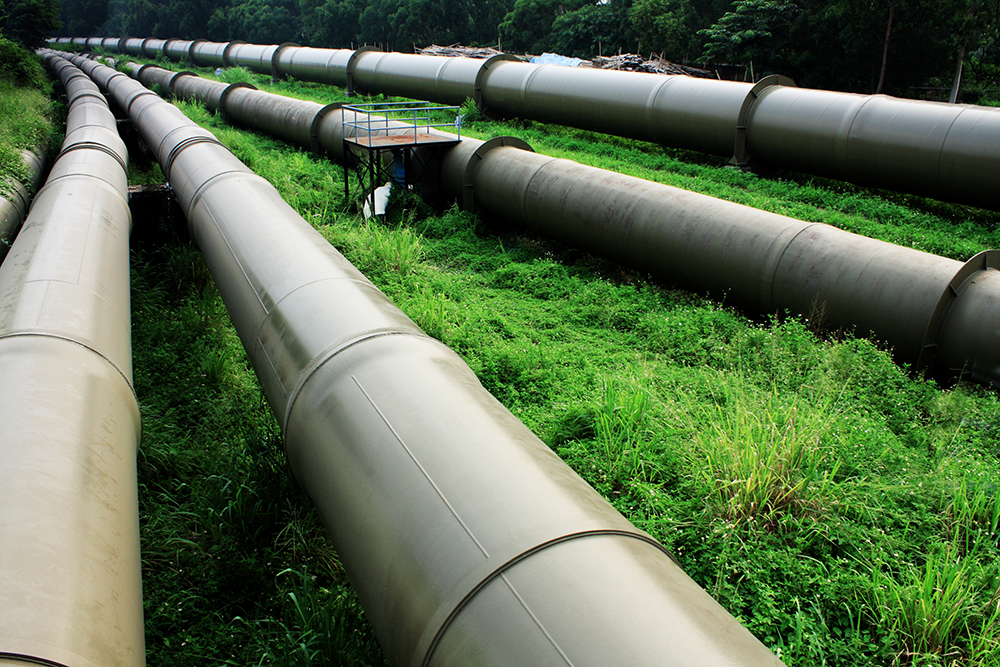 Without a major pipeline like the Keystone XL, expanding tar sands projects in Alberta is a risky venture. (Photo: Bigstockphoto)

CURWOOD: Now, there's been a debate about just how important Keystone XL pipeline is to getting tar sands oil. The folks who are opposed say it is essential. Industry says that the oil is going to get to port either way. How do you think the StatOil decision influences that debate?

PALMER: Well, so the StatOil decision is just one of many. Shell has canceled projects recently. The French energy company Total, SunCor Energy of Canada, they've all killed tar sands projects in the last year, and those cancellations have cost billions of dollars. What they're looking at is not the current state of things. They are looking into the future. There was an article in Politico quoting a lot of energy executives talking about how the delays of Keystone are sort of irrelevant, quoting a lot of numbers about how much Canadian oil is coming into the United States. But the issue is not expansion up until now. It's future expansions. So think of tar sands projects as being something like a freight train. It takes a lot of work to get one going, but once they're going, it's very hard to stop them. Once you’ve put, tens of millions, hundreds of millions of dollars into starting a tar sands mine, you're not going to shut it down because you've already put the money in. 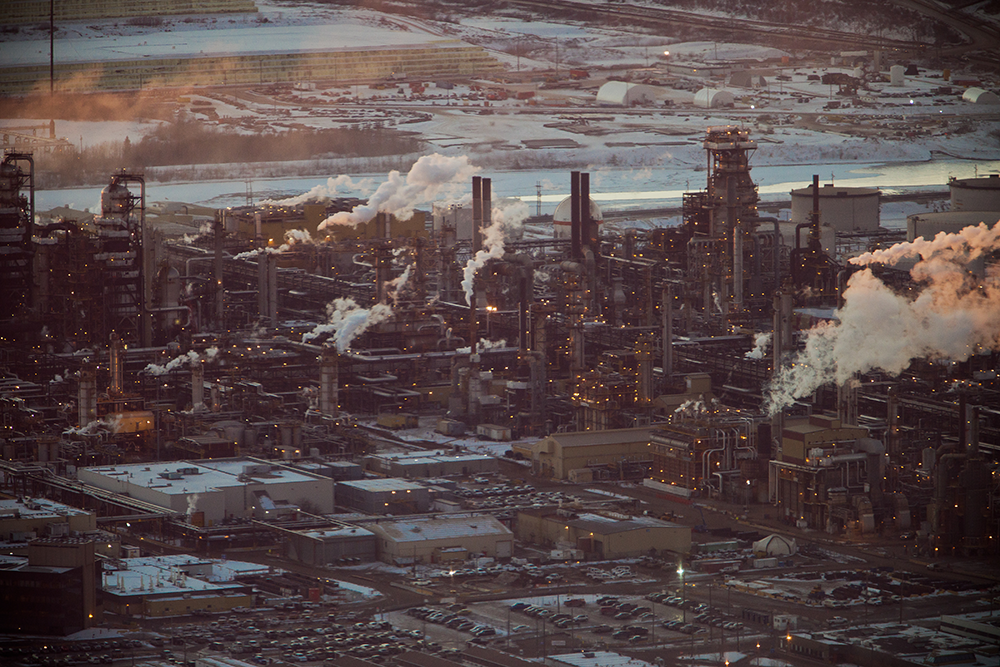 PALMER: The problem is building new mines. If you're going to invest lots and lots of money, and you're an oil executive and you want to invest in a project that's going to take 30 years, but you have no reason to believe it's ever going to become profitable because you don't have a pipeline, that's going to scare you off, and you're going to have a hard time convincing your shareholders that's a good idea. So these other kind of alternatives: rail is a terrible kind of alternative. They want to expand another pipeline called the Alberta Clipper - that's encountering resistance. That's going nowhere. They just don't have a lot of options right now. They barely have enough to handle the tar sand oil that they have, and the idea of expanding the industry just seems like a complete nonstarter right now.

CURWOOD: So, looks like the Harper government is pushing to convert an existing gas pipeline that goes east across nearly every province in Canada to take oil from Alberta, to take that tar sands oil to refineries. What do you make of that?

PALMER: So the Energy East pipeline is sort of a Canadian version of Keystone XL, and it's getting the same reaction in Canada that Keystone XL got in the United States. Once it became a serious issue, lots of Canadian environmental groups started raising a fuss about it for good reason. 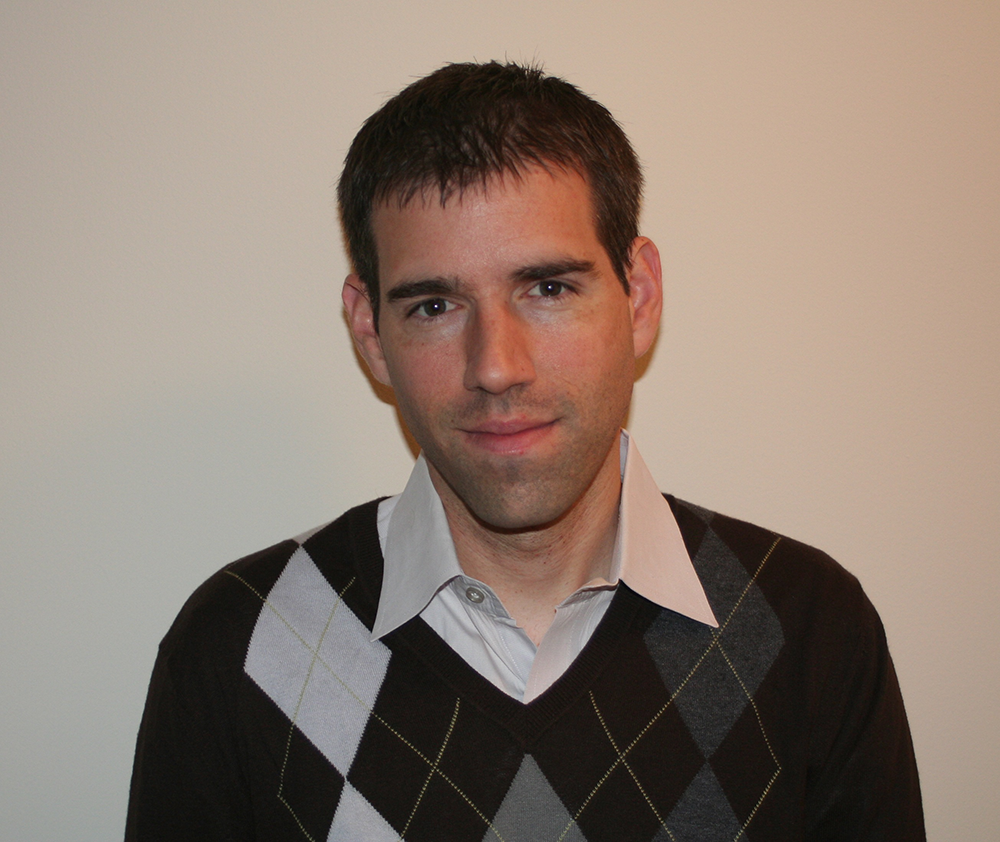 CURWOOD: Yeah, we saw that in Montréal Gazette reported that some 2,000 people showed up at a town of 2,000 to protest the Energy East pipeline. Doesn't seem like it's terribly popular in Québec anyway.

CURWOOD: So how concerned are the shareholders of these major companies that these delays are going to go on forever?

PALMER: That's a good question. I think the flurry of articles we're seeing recently, talking about Keystone as no longer that important to oil companies, is an indication of worry in the boardrooms. If you own stock in an oil company that invests in tar sands and has an existing project and you see all these cancellations, you're starting to think why are we so heavily invested in tar sands when no one else wants to get into this business? And so I think what's maybe going on with a lot of these new articles and energy executives confidently talking about a new pipeline access like Energy East or Alberta Clipper or other pipelines, that what's going on is that's a message they're sending their shareholders saying, "Don't worry. There's going to be pipeline access. We're not throwing money down into a pit quite literally. This is going to work out in the end. You just have to stick with us through this and we'll make sure everything is OK.”

CURWOOD: And they're speaking the truth?

PALMER: [LAUGHS] Only time will tell. It doesn't look good right now if things continue as they are.

CURWOOD: Brian Palmer is a writer for OnEarth Magazine, a publication of the Natural Resources Defense Council.

PALMER: Brian, thanks so much for taking the time with me today.

CURWOOD: Thanks for having me, Steve.