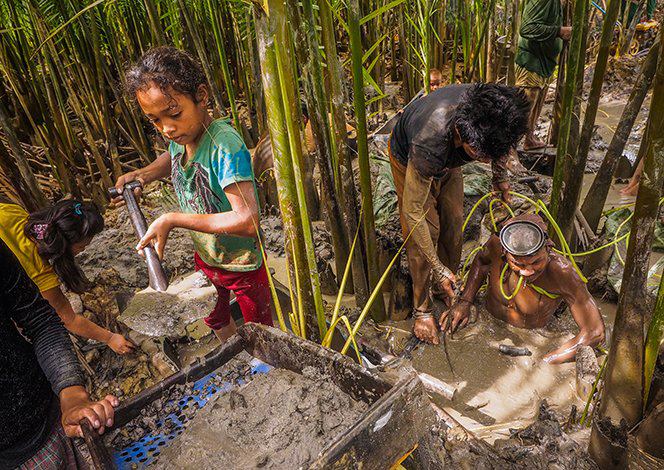 In the small farming village of Tawig, Philippines, an extended family group of 16 miners has set up operations in a grove of nipa palms. The mining tunnels look like mud puddles but are as much as 40 feet deep. (Photo: Larry C. Price/ Center for Investigative Journalism)

CURWOOD: If mining the deep sea for valuable metals is at the cutting edge of underwater mining technology, then some gold mining in the Philippines could demonstrate one of the worst examples of homegrown, unsafe and unregulated methods. Children as young as five years old are working in a particularly dangerous form of shallow water gold mining called compressor mining. Richard Paddock wrote about compressor mining as a Contributing Editor for the Center for Investigative Reporting, and he joins me on the line now to explain what it's all about. Welcome to the program.

PADDOCK: Thanks very much.

CURWOOD: Rick, first of all describe for me, how does this compressor mining thing work?

PADDOCK: So, in order to find gold that is underground, these miners will dig a hole into a rice paddy or into the bottom of a waterway such as a shallow bay, and they’ll dig a hole straight down and start passing up buckets of mud to a partner above.

CURWOOD: Why do you call it a compressor? 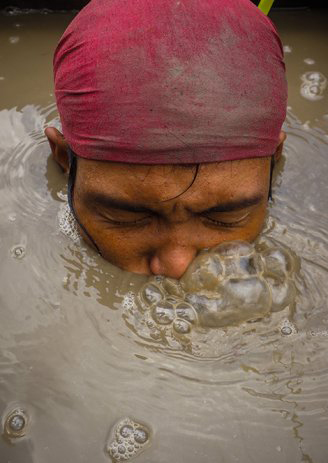 A miner sinks below the muddy water of Mambulao Bay to begin a dive for ore that can last for hours. Breathing air supplied through a tube from a simple air compressor, the miner’s job is to fill bucket after bucket with soil for a fellow miner to haul to the surface. (Photo: Larry C. Price/ Center for Investigative Journalism)

PADDOCK: In order to be underground and underwater for long periods of time, perhaps three or four hours, they’ll breathe through a tube that is connected to a small compressor often made out of a beer keg. That compressor is connected to a small motor, diesel motor that powers the compressor. So they’ll go into the hole where they cannot see a thing - it’s just muddy water - and dig down as much as 40 or 60 feet. And when they get to a layer of soil where they believe there’s gold in the sediment, they’ll start digging sideways. Meanwhile, a partner up on top is hauling up bucket after bucket of this soil, and dumping it out for others to work with and extract the gold.

CURWOOD: And now, once they get the flecks of gold what happens then? 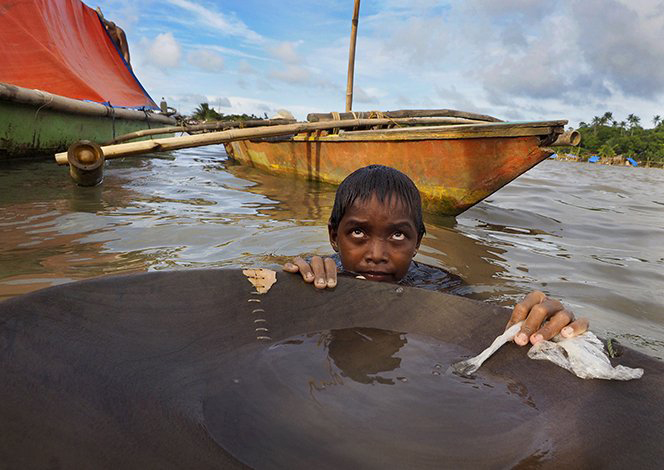 Jonathon Ramorez, 12, uses a wide wooden pan to separate gold from sediment in the Philippines’ Mambulao Bay. A plastic bag holds a small lump of mercury and gold, the product of the mining crew’s work for the day. (Photo: Larry C. Price/ Center for Investigative Journalism)

PADDOCK: They’ll take that, and they’ll combine it with mercury. Gold binds to mercury. And they’ll take that and process it a number of times until they’ve got as much gold and mercury together as they can. Then they will squeeze that out - it’s still sort of a liquid form - they’ll squeeze it out and try to solidify it into a lump that’s sometimes known as an amalgam. Then they’ll take that and burn it using a blowtorch. When they heat it up, the mercury is vaporized, leaving just the gold. Mercury vapors are very hazardous, and that’s one of the big problems with this form of mining.

PADDOCK: There are a number of dangerous hazards. The one they fear most is the collapse of the soil while they’re in the hole. Other dangers include bacteria that’s in the water. It can be leptospirosis or various parasites that they can pick up. They can also get nitrogen bubbles in their lungs, sometimes the compressor hose itself has pollutants - oil or carbon dioxide - and that in some cases can be fatal. The burning of the mercury is one of the biggest hazards because mercury is a toxin known to cause brain damage or reproductive harm. These hazards are especially great for children whose bodies are still developing. Some children as young as 13 are participating in this diving, and it takes a real toll on them as they’re growing.

CURWOOD: So, you say a lot of people doing this work are children...how exactly do they get involved?

PADDOCK: Well, a lot of these are family operations, an extended family might find that their best way of making a living is to work in a rice paddy, for example, and the whole family participates. It may be that the older men start out as the divers, the divers make more. So for boys and young men, this can be an appealing way to make a living. I should say that living is not great, they might make $5 a day, or perhaps even more than $20 on a great day, but there are also a lot of days when they make nothing. These people are fairly desperate to find some way to earn money and they subject themselves to great risk in doing so.

CURWOOD: How young are the children involved in this operation?

PADDOCK: I saw a five-year-old who was helping out his family by fetching water and moving dirt around, but the serious work is done by boys and girls 13 and above.

PADDOCK: I saw one girl who was panning for hours at Mamburao Bay. I don’t think she was the only one.

CURWOOD: Now, when you talk to the miners in the Philippines, how concerned were they about the possible health effects of mercury exposure?

PADDOCK: Well, I talked to one boy who was 16 who was burning mercury. He’s the one who told me he had started at eight years old. He said that no one had told him before that mercury vapors were hazardous, and he was a little reluctant to believe me when I outlined some of the dangers. The more pressing problem for them is how they’re going to buy food, how they’re going to eat. They’re not really thinking in a very long term way.

CURWOOD: So, how many folks do you think are involved in this enterprise?

PADDOCK: It’s a good question. One location we saw about 40 rafts on a bay, and each raft had more than 10 workers, so there’s at least 400 right there, probably a few thousand scattered around that province and other parts of the Philippines.

CURWOOD: So, let’s say as a consumer, someone’s on the market for a gold ring, what way if any is there to know if a potential purchase is coming from this type of gold mine?

PADDOCK: I think it’s really impossible to know. Much of the gold from the Philippines is sold to brokers and it eventually ends up in China. If it enters the worldwide gold supply, it could easily come to the United States, there could be a small percentage of gold in the United States that comes from the Philippines but there’s no way to trace it because once it enters the world gold supply it’s unidentifiable.

CURWOOD: Richard Paddock is a Contributing Editor for the Center for Investigative Reporting. Thanks so much for taking the time with me today, Rick.

PADDOCK: Thank you very much.