How to eat a Geoduck 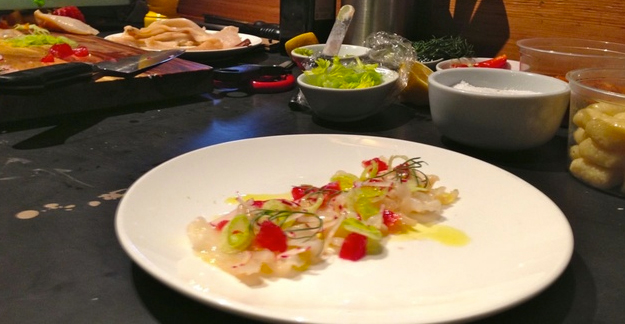 Geoduck crudo is on the menu in Seattle. (Photo: Ashley Ahearn)

The Geoduck clam of the Pacific north-west is prized in China, but imports were recently banned after a sample showed high levels of arsenic. Now Seattle restaurants are trying to get locals to eat the huge clam, as Ashley Ahearn reports.

CURWOOD: Back in December, China banned shellfish imports from most of the US West coast over health concerns, including a high level of arsenic in one sample. The ban has hit folks who harvest the geoduck especially hard. These giant long-necked clams can live more than 150 years and are a delicacy in China‚ but in America, not so much. And with the export market on hold, clam diggers are looking for customers closer to home. In Seattle, Ashley Ahearn from the public media collaborative Earthfix, headed to a popular local restaurant that’s promoting the geoduck.

GIFFORD: My name is Michael Gifford we are at How To Cook a Wolf in Seattle, Washington.

AHEARN (on tape): And what are you doing right now?

AHEARN: Gifford lines up the fist-sized clams on a shelf above the sink. Their necks drape down a foot or so over the edge, a yellowy-brown sheath maybe an inch or two thick.

GIFFORD: This is going to get a little raunchy. It’s a very phallic looking animal. So what we do is we bring them in, let them relax a little bit, let them go down and get out to its natural length.

AHEARN: Ahem. Natural length for a geoduck is usually around three feet. Gifford drops a clam into a pot of boiling water for a few seconds and then... 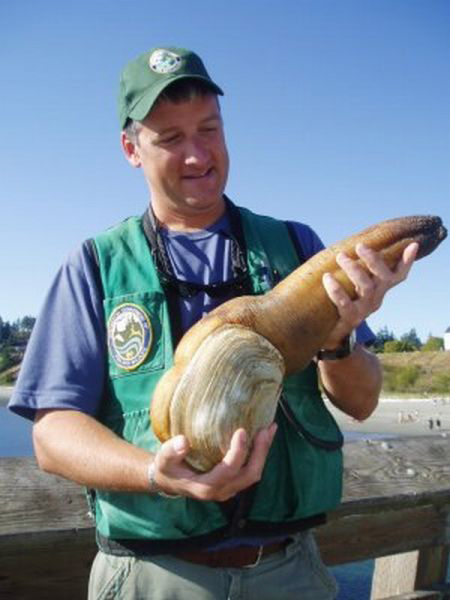 A 6.53-pound Geoduck nicknamed Moby was dug up near Discovery Bay. (Washington Department of Fish and Wildlife)

GIFFORD: Into the ice water. Let that cool down. We don't want to overcook it.

AHEARN: The clam visibly tenses up when Gifford drops it into the ice water. You can see the shriveled skin start to separate from the rigid neck of the clam.

GIFFORD: There we are (peeling off skin) almost like a snake when you find a snakeskin. It’s like wow – is it really that long? But there you go.

AHEARN: The skin of every single clam had amounts of arsenic above China’s safe levels.

The rest of the clam's body parts, like the neck, the mantle and the gut ball, were OK, except for one sample.

DEWEY: First step is always to remove the skin so we haven’t found any recipes or any suggestions that eating the skin is appropriate.

AHEARN: Bill Dewey is a spokesman for Taylor Shellfish. They're one of the largest shellfish company in the country, based here in Washington. He says the company has had more testing done on several different kinds of shellfish it sells. The levels of metals are all very low and some of them are naturally occurring, but they're there.

DEWEY: You will see arsenic, cadmium, selenium, all sorts of different metals some good for you some not good for you in all your shellfish.

AHEARN: The Department of Health rigorously tests shellfish for biotoxins and bacteria, but it doesn't regularly test for metals. Past tests from the DOH have shown metals in shellfish at levels below public health concerns. But as with all things, it’s a question of how much shellfish you eat, and some Indian tribes and Asian immigrant communities eat considerably more shellfish than the rest of the population.

Michael Gifford slices delicate strips of geoduck flesh off the neck of the clam.

Now he's finely mincing Fresno chilis and celery. Then he smears a green stripe of avocado puree across the plate. Gifford arranges the geoduck in pearly ruffles atop the avocado green and sprinkles some olive oil.

GIFFORD: A little bit of lemon. We use fleur de sel, a very nice sea salt. And then we'll get to eating. So, for your first one. For your first time. Please.

AHEARN: Gifford hands me a forkful of geoduck.

GIFFORD: Like clams on the half shell. The texture, it's tender but there’s chew to it.

AHEARN (on tape): I was kind of expecting rubbery, looking at them from the outside. It's a lot more subtle.

AHEARN: Gifford remembers his first experience with geoduck. He had it at a sushi restaurant soon after he moved to Seattle from New Jersey.

GIFFORD: It was a great introduction, I was like - wow, I've never seen this before. It's really unique. We're very fortunate here to have this product.

DEWEY: In the ’50s, you'd be hard pressed to find geoduck on a menu, maybe on the Hood canal in the Geoduck Tavern, but in Seattle restaurants probably not too much.

AHEARN: Dewey says Taylor Shellfish has been actively promoting geoduck to restaurants around the Northwest. There are now close to 20 restaurants in Seattle with geoduck on the menu.
But the domestic market isn't making up for the industry's losses abroad. Geoduck can sell for close to $100 per pound in China. Seattle restaurants pay around $20 per pound, and as the ban drags on, Dewey says Taylor Shellfish and others have had to make some tough cuts.

DEWEY: We did our best through the holidays to keep people employed, shifting them to other jobs, doing maintenance work on the farms and so on, but ultimately it's gone on long enough that we've had to lay some people off here a couple weeks ago.

AHEARN: Taylor laid off 14 people and estimates its losses at upwards of a million dollars. Geoduck harvesters with the Suquamish and other tribes are slowly getting back to work, selling clams to other Asian countries. The Department of Natural Resources is out close to $1 million in revenue from geoduck harvested in state waters. Dewey says he's optimistic that China might lift the ban soon. But the federal government said there is no timeframe for that, and they have not had an official response from China.

For now, Geoduck may still be a tough sell for Northwest foodies, but if more chefs like Michael Gifford have their way with this quirky clam, the future might look a little more delicious.