When a pair of eagles set up house between a parking lot and the athletic center of Berry College in Georgia, school officials set up an eagle cam to keep watch on the nest. Host Steve Curwood talks eagles with Berry College biology professor Renee Carlton.

CURWOOD: At Berry College, in Mount Berry Georgia, they have a pair of eagles nesting on campus and because of the event, the college has installed an “eagle cam” to allow people to watch a live stream of this nest located between the parking lot and the entrance to the athletic center. And joining us today to discuss this is Dr. Renee Carleton, she's Associate Professor of Biology at Berry College. Welcome to Living on Earth, Renee. 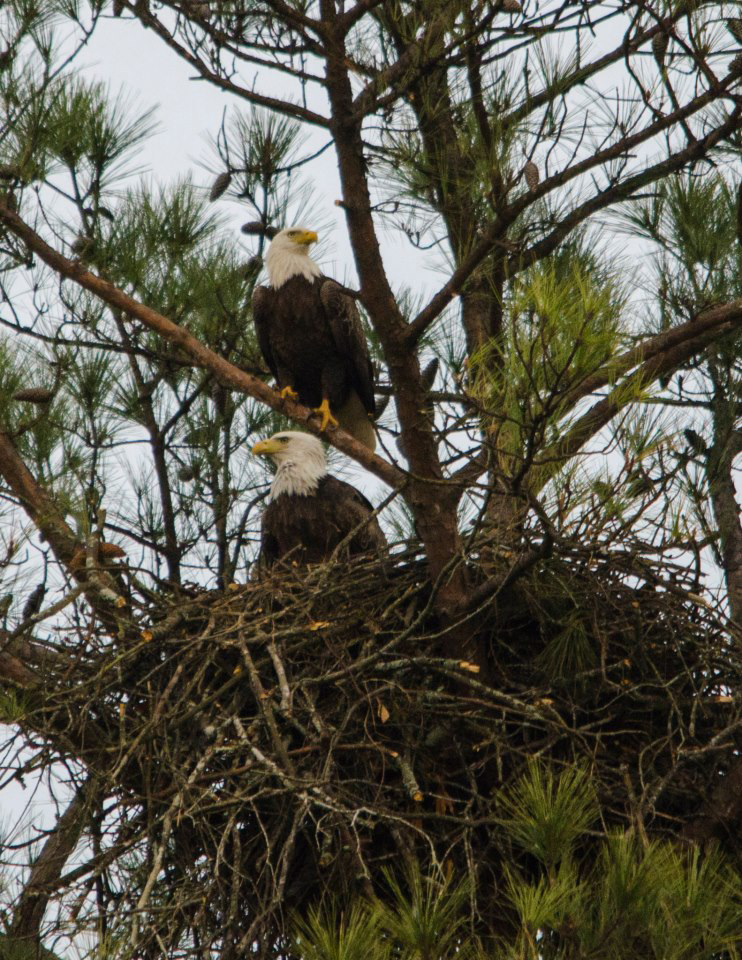 CARLETON: Well, thank you very much and thank you for having me talk about my favorite subject, our eagles.

CURWOOD: So when did you first notice the eagles in the nest?

CARLETON: Well, back in 2012, I had a student come and tell me that he had found an eagle nest on campus. And I immediately thought it was up on our mountain campus. We have a reservoir up there. So I said: “where around the reservoir is it?” And he said: “it’s not there, it’s behind the athletics center.” So I went out and located the tree that the nest was in, and within a couple of weeks started seeing the eagles, and it was very obvious that they were building a nest right here on campus.

CURWOOD: So why did you decide to install a camera? 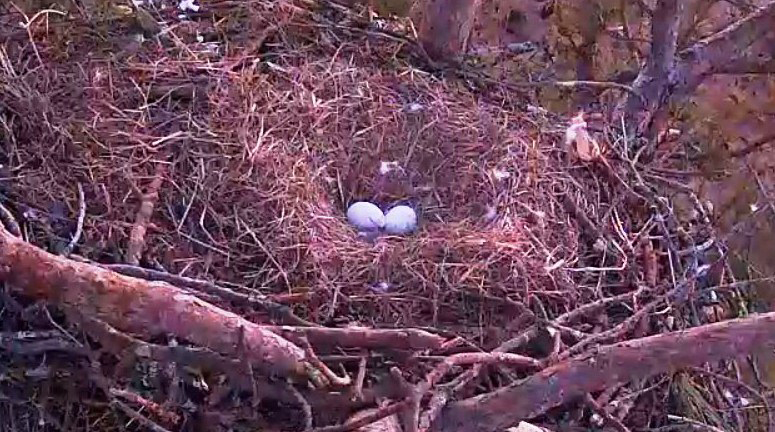 CARLETON: Well, eagles are such iconic birds. Everybody loves watching them. The first year when they were nesting, we had crowds of people come to watch, and we initially installed a camera that was pointed at the nest tree, but you couldn’t really see what was going on inside the nest. So, we, with the help of Sony and Georgia Power, installed this nest cam which actually points down into the nest, so everybody can have the eagle eye view of what’s going on.

CURWOOD: So I have the eagle cam up right now. Now if someone wants to look along while we’re talking, go to berry.edu, that’s b-e-r-r-y.edu/eaglecam. She’s sitting on the nest, do I have that right?

CURWOOD: And...this is so cool. I can see she’s looking around, and her feathers ruffling just a little bit. 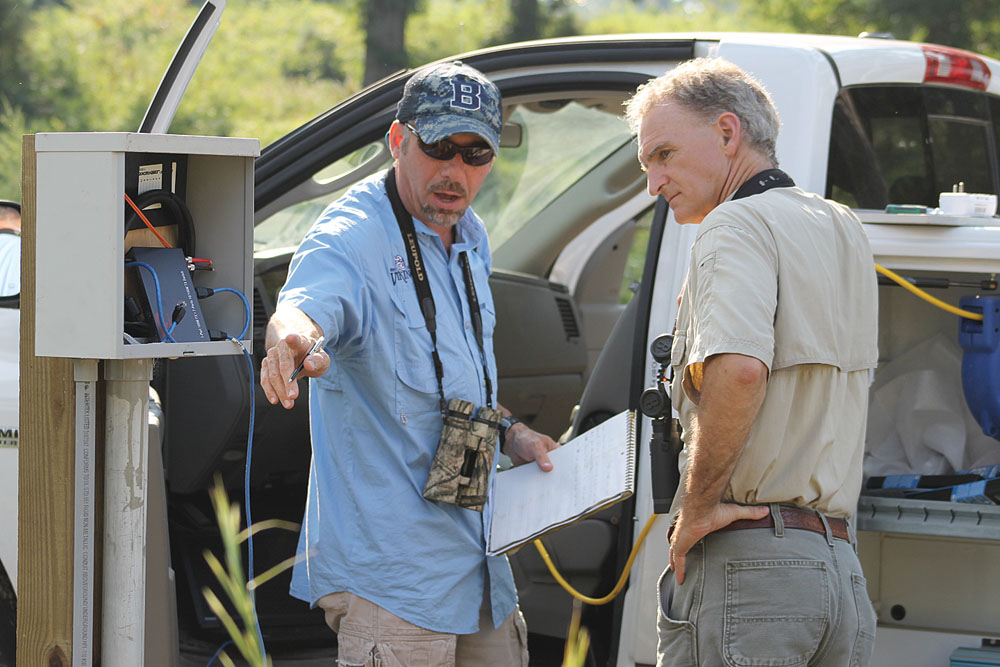 CARLETON: It is a little breezy today so the ruffling of the feathers is because of the breeze.

CARLETON: He’s probably off hunting. She stays pretty close to the nest. She’s on it almost 24 hours a day. So he’ll go off and hunt and bring something back for her.

CURWOOD: I imagine you have some rather careless squirrels on campus as well.

CARLETON: Yes. We do have a lot squirrels. We have also a very large White-tailed deer population, although I don’t think the eagles are going to try to tackle one of those guys.

CURWOOD: Now, you originally thought this was out at the reservoir. I mean, how unusual is it for eagles to start camping out right next to where people are living and working? 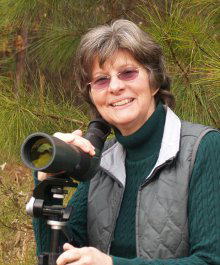 CARLETON: Well, eagles do prefer to be around water. They are primarily aquatic type predators. They like to catch water fowl and fish. This particular location is really equidistant between the reservoir on the mountain campus. There is a river fairly close by. Also, there’s an old rock quarry on campus, and a pair of lakes that aren’t too far from us. So really, this to them, I suppose, seemed to be the ideal place, to be equidistant between all these hunting grounds.

CURWOOD: As I understand it, eagles aren’t all that common in your part of Georgia. Why is that?

CARLETON: Because of DDT, the pesticide, eagles became endangered, and in fact, in the ’70s there were no nesting eagles recorded in Georgia at all. After the Endangered Species Act, and the banning of DDT, the populations were able to rebound. Initially eagles were found primarily along the coast, but because they’ve been able to reproduce successfully, the population numbers have increased and eagles have started to move inland to areas that can support them. And our particular area, this region is very, very diverse in terms of biodiversity. So really, it’s made a very good place for eagles to come. And in fact, this particular nest is the first one that’s documented in our particular county. So it’s really a success story.

CURWOOD: Now as I understand it, these eagles are quite good planners.

CARLETON: So they’ll start tending to the nest in September, come around more and more in October and November. And then they actually start their breeding activities in December. This particular pair had two eaglets last year. We think the first egg was laid right around Christmastime, and then the eaglet hatched in late January and fledged in April. This year, they’re a little bit later. The first egg was laid on January 14, and the second egg was laid on the 17th. So we’re expecting the hatch to occur right around Valentine’s Day.

CURWOOD: Now tell me what happens. Hopefully these eggs will hatch soon...Valentine’s Day you’re projecting. What stages will the hatchlings go through that people can see on the eagle cam?

CARLETON: After they hatch, we’ll probably only get some very brief glances of them because at first, young eaglets don’t have the ability to maintain their own body temperature. So they’re going to rely on mom to keep them warm, and she’s going to nestle down right on top of them and keep them comfortable for about a week to 10 days. And then as their feathers start to come out more and they’re able to control their body temperatures, both adults will go and find prey items to feed the eaglets. I think what most people will really enjoy watching is when parents are feeding the eaglets because they’re really very careful. You can imagine this big large bird with the talons and the bill. They will actually fold their talons into the foot, so when they come in for landing at the nest, they don’t accidentally spear one of the eaglets. And then they’ll very carefully pick off small pieces of meat to feed the babies. So they’re really excellent parents, and I think people will really enjoy watching that.

CURWOOD: Renee, what do you hope people will gain from this camera?

CARLETON: I think it will give everybody some real insight into what goes on in eagle life, especially how fast they grow and what kind of steps parents have to do to insure that the eaglets get enough food in order to survive. And what it’s like to be up in a tree that sometimes is swaying quite a bit with the wind. But it’s just a real unique chance to get to get personal with our national symbol, and I think one of the most beautiful birds on Earth.

CURWOOD: Well, Renee, I want to thank you for taking this time today, and for looking after these eagles.

CARLETON: Well, it’s my pleasure to be able to give you some information about them. I hope everybody will check out the cam and get a chance to see the eagles in action and enjoy what almost what has become commonplace for us.

CURWOOD: Dr. Renee Carleton is an Associate Professor of Biology at Berry College in Mount Berry, Georgia. Thank you so much.