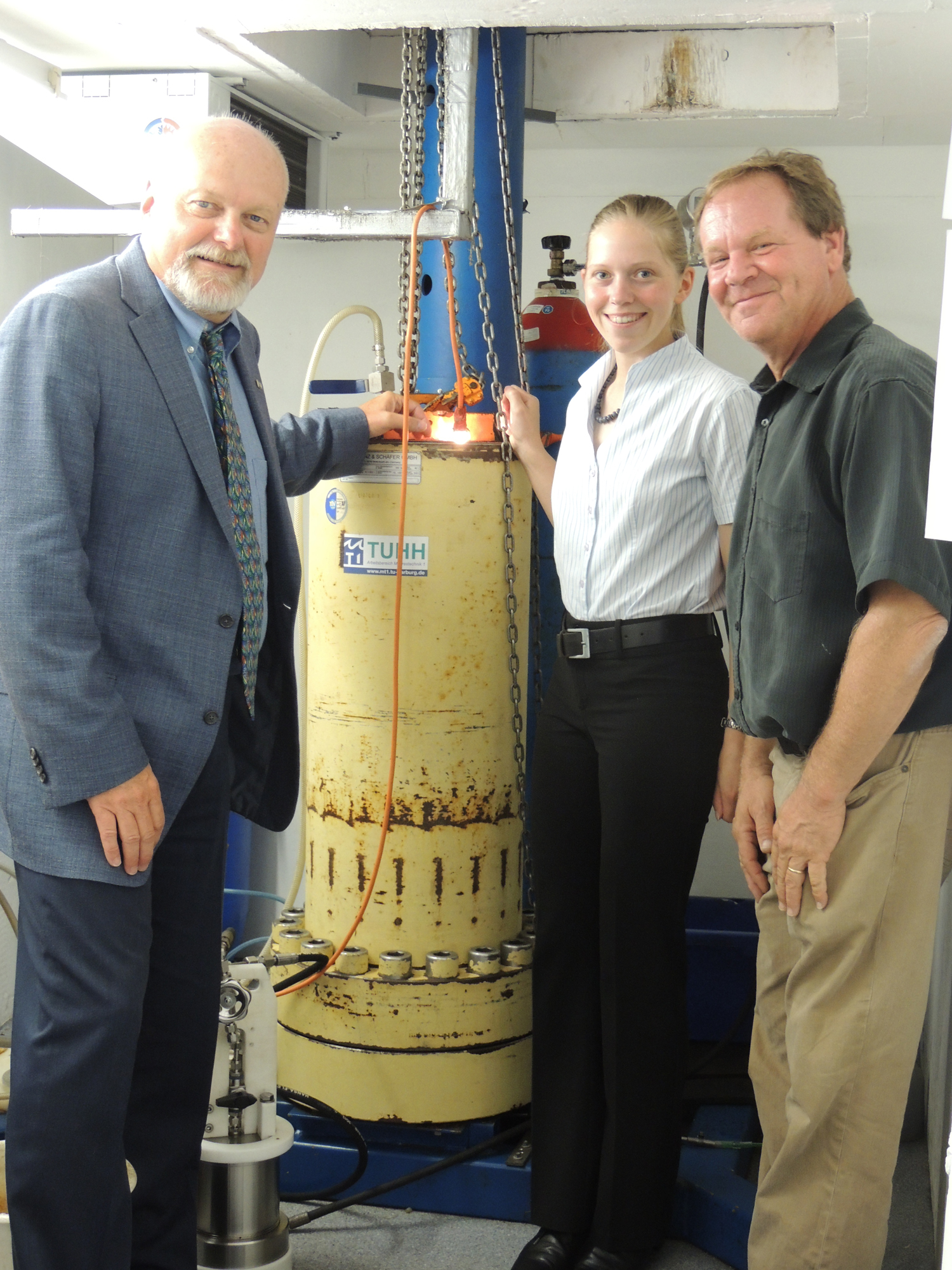 USF researchers Steve Murawski (left) and David Hollander (right) stand in front of a high-pressure chamber at the Hamburg University of Technology, where Karen Malone (center) tests oil from the Deepwater Horizon spill. Scientists like Malone are using pressure chambers like this one to recreate the conditions at the bottom of the Gulf of Mexico where the spill played out. (photo: Sherryl Gilbert, University of South Florida College of Marine Science.)

5 million barrels of oil spewed into the Gulf when BP's Macondo well exploded in 2010, and some remained suspended in the water. New research in Hamburg Germany is examining why the oil behaved like this, as David Levin reports.

CURWOOD: Well, not all the oil we use comes from onshore sources. We still get plenty from deep under the seabed, which can also lead to disasters, such as the catastrophic blowout of BP's Macondo well in the Gulf of Mexico in 2010. That well spewed some five million barrels of oil into the Gulf over three months. Some was recovered, but much remained suspended in the water, and scientists have been struggling to understand exactly why the oil behaved this way. One collaboration of chemists, engineers and biologists is called C-IMAGE, which stands for the Center for Integrated Modeling and Analysis of the Gulf Ecosystem. David Levin has been following their work, and his latest report takes him to Germany.

LEVIN: For more than a thousand years, life here in Hamburg, Germany has revolved around water. This riverside city is one of Europe’s biggest ports, and it’s full of canals like this one—a narrow channel tucked behind ornate 16th century buildings. 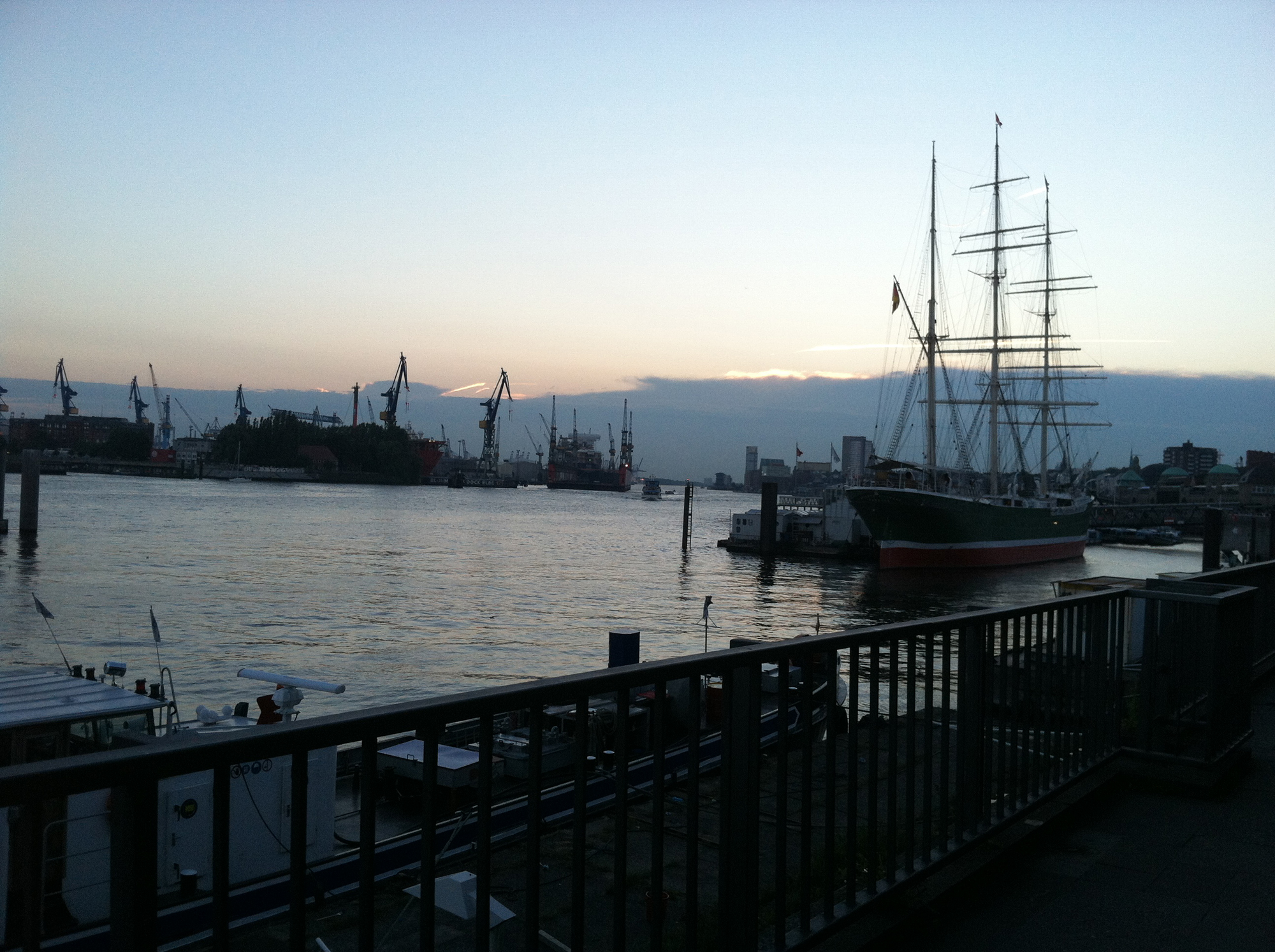 The sun sets over the Elbe River, a major waterway that runs through downtown Hamburg. The river, which empties into the North Sea about 70 miles northwest of the city, has made Hamburg one of the busiest ports in Europe for more than 1000 years. (photo: Sherryl Gilbert, University of South Florida College of Marine Science.)

The waterfront is a hotspot for tourists, who flock here to take pictures. But in a lab across town, a group of scientists is focused on waters half a world away, in the Gulf of Mexico.

During the 2010 Deepwater Horizon spill, five million barrels of oil dumped into the Gulf from a broken well on the ocean floor, more than a mile down. Most scientists thought that oil would float right up—but the strange thing is, not all of it made it to the surface.

MURAWSKI: A substantial fraction of that oil rose up to a certain level in the ocean and stayed there in these large plumes. So we need to understand what factors actually contributed to that.

LEVIN: Steve Murawski is an oceanographer at the University of South Florida. He’s here in Germany to meet with an international team of researchers who are studying the spill.

Murawski says that during the blowout, oil didn’t just drift up from the well—it sprayed out, like an aerosol can. Clouds of oil droplets formed, and they stayed suspended at different depths in the ocean. Those clouds spread toxic chemicals into the water. They killed off plankton and other tiny creatures, which had a big impact on animals all the way up the food chain, from fish to whales. 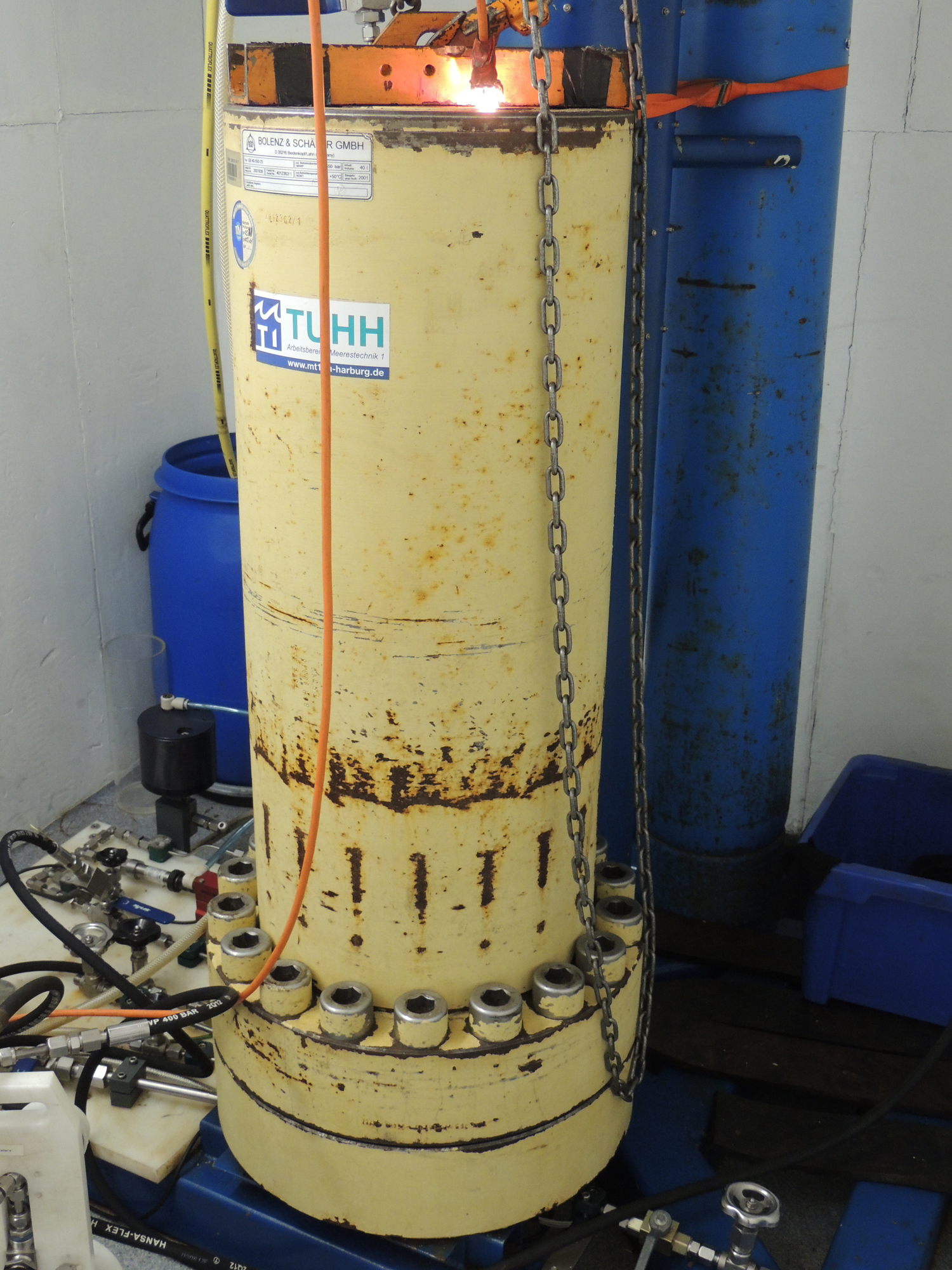 In this image, one of two high-pressure chambers run by the Hamburg University of Technology undergoes regular maintenance. When fully pressurized, the chamber can simulate conditions at the bottom of the Gulf of Mexico, more than a mile below the surface. (photo: Sherryl Gilbert, University of South Florida College of Marine Science.)

Exactly how the clouds formed is still unclear. That’s what Michael Schluter is trying to find out. He says the answer may lie in the oil droplets themselves.

SCHLUTER: Exactly. Everything starts with these tiny little droplets. And this initial droplet size affects the whole distribution of oil in the ocean.

LEVIN: Schluter is a researcher at the Hamburg University of Technology. He’s working with Murawski’s team to learn how oil travels through the water during a deep water blowout. At the wellhead, he says, it can shoot out at tremendous speeds…

SCHLUTER: …but after a certain distance, just a few meters, the momentum that pushes the oil and gas out of the well is gone, it's dissipated, and then we have just the bubbles and the droplets that are rising by their buoyancy.

LEVIN: As the oil droplets float upwards, they form a chaotic, swirling column. They break apart. Then glom back together. Chemicals like benzene and gases like methane bubble out and dissolve into the water. As the droplets change in size, some of them slow down, break off from the column, and float away, creating those huge oily clouds underwater. Or so the researchers think.

MURAWSKI: Nobody was able to accurately sample the particle size a mile down, so we don’t actually know what it was.

MURAWSKI: We’re trying to figure out if in fact the physics and chemistry of this oil, coming up at a very high rate of speed, was sufficient to create subsurface plumes of small droplets.

LEVIN: To do that, Murawski says you need to track the individual droplets of oil, and watch what happens to them as they rise. Doing that in the field is nearly impossible. During the Deepwater Horizon spill, just getting down to the well was a big challenge—let alone following tiny bits of oil around. So instead, you have to recreate the spill… inside the lab. That’s where Schluter comes in. He and his team are building a miniature version of the blowout inside a pressure chamber here in Hamburg.

SCHLUTER: Here we are. Let’s take a look inside… careful…

LEVIN: Schluter leads me into a huge metal shipping container, where a web of hissing pipes run into a four-foot tall cylinder. It’s a tank made of two-inch thick steel, and it’s wrapped in black foam insulation. It looks like the hot water heater in my basement. But inside, Schluter’s recreating the conditions at the bottom of the Gulf of Mexico, where the water pressure is more than two thousand pounds per square inch, and temperatures hover just above freezing.

MALONE: So I now set pressure, and I will start the pump.

LEVIN: PhD student Karen Malone starts pumping water into the tank. When it reaches the right pressure, she’ll ease a steady flow of oil though a narrow tube, to see what happens to the droplets.

MALONE: Well… [LAUGHS] it looks like a really small cylinder, but there’s very big power inside. If you click the wrong button at the wrong time, then maybe I blow up at least myself, and maybe half the building.

LEVIN: An accident that dramatic is unlikely—there are lots of safety measures in place, and Malone knows the pressure lab well. But there’s still an element of danger. Steve Murawski says those hazards come with the territory. High pressure experiments like this one are the only way to tell what really happens in deepwater blowouts.

MURAWSKI: You know, theoretically, we could let another well blow out and test this, but the world is sick of oil spills, so creating an oil spill in a laboratory is the next best thing.

LEVIN: Schluter and Malone are recording the oil droplets in the tank using a high-speed camera. They’ve measured their size. How they form. How they break apart and join back together. And how their speed changes in the process. They’ve also recorded what happens to the methane gas that bubbles out of the oil.

On some of the droplets, it actually forms an icy crust called a methane hydrate. It looks kind of like snow, and can affect how the oil moves.

The experiments in Hamburg are still in their early stages, but Schluter is convinced that to understand the big picture, you have to start small.

LEVIN: So what is it like for you to kind of think about something so small that you're studying, affecting something so huge?

LEVIN: Do you ever think about that?

LEVIN: He isn’t philosophical about his work. It’s measurements and data that make Schluter tick—which is good, because in the coming months, Steve Murawski and his team plan to use his measurements to build a computer model of the oil. Once they know what happens as it comes out of a well, they’ll be able to predict where the oil go, and how it’ll move through the ocean.

So here in Hamburg, more than five thousand miles away from the Gulf of Mexico, this simulated blowout could help scientists react to real blowouts—which could happen not just in the Gulf, but in the waters off Brazil, Nigeria, and other countries building deepwater wells.

For Living On Earth, I’m David Levin in Hamburg, Germany.

CURWOOD: David's story was supported by a grant through the C-IMAGE consortium.