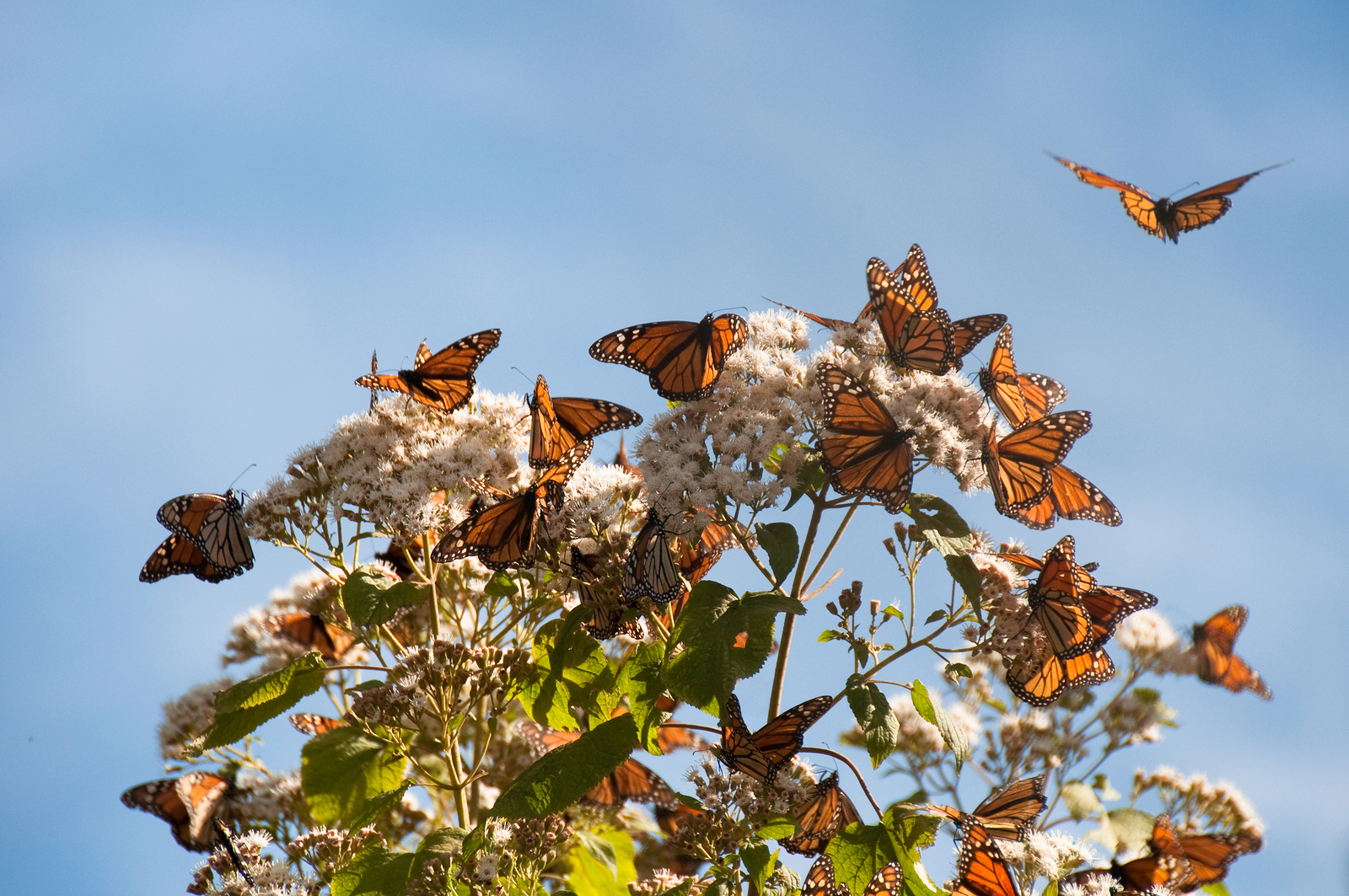 From the wildebeest to the monarch butterfly, this year many of the world’s great animal migrations are out of whack. Migration expert and Princeton Ecology professor David Wilcove joins host Steve Curwood to discuss what’s going on.

CURWOOD: Some of the most awe-inspiring spectacles of the natural world are the migrations of creatures great and small - from turtles and terns, to butterflies and beasts. But this year some of the world’s most famous migrations seem to be out of sorts. To find out what’s going on, we called up David Wilcove, Professor of Ecology and Evolutionary Biology at Princeton. Welcome to Living on Earth.

WILCOVE: It's a pleasure to be here.

CURWOOD: First, let’s talk about the butterflies. As I understand it, usually by November there are millions of Monarch butterflies that have arrived in Central Mexico. Could you describe that migration for us? 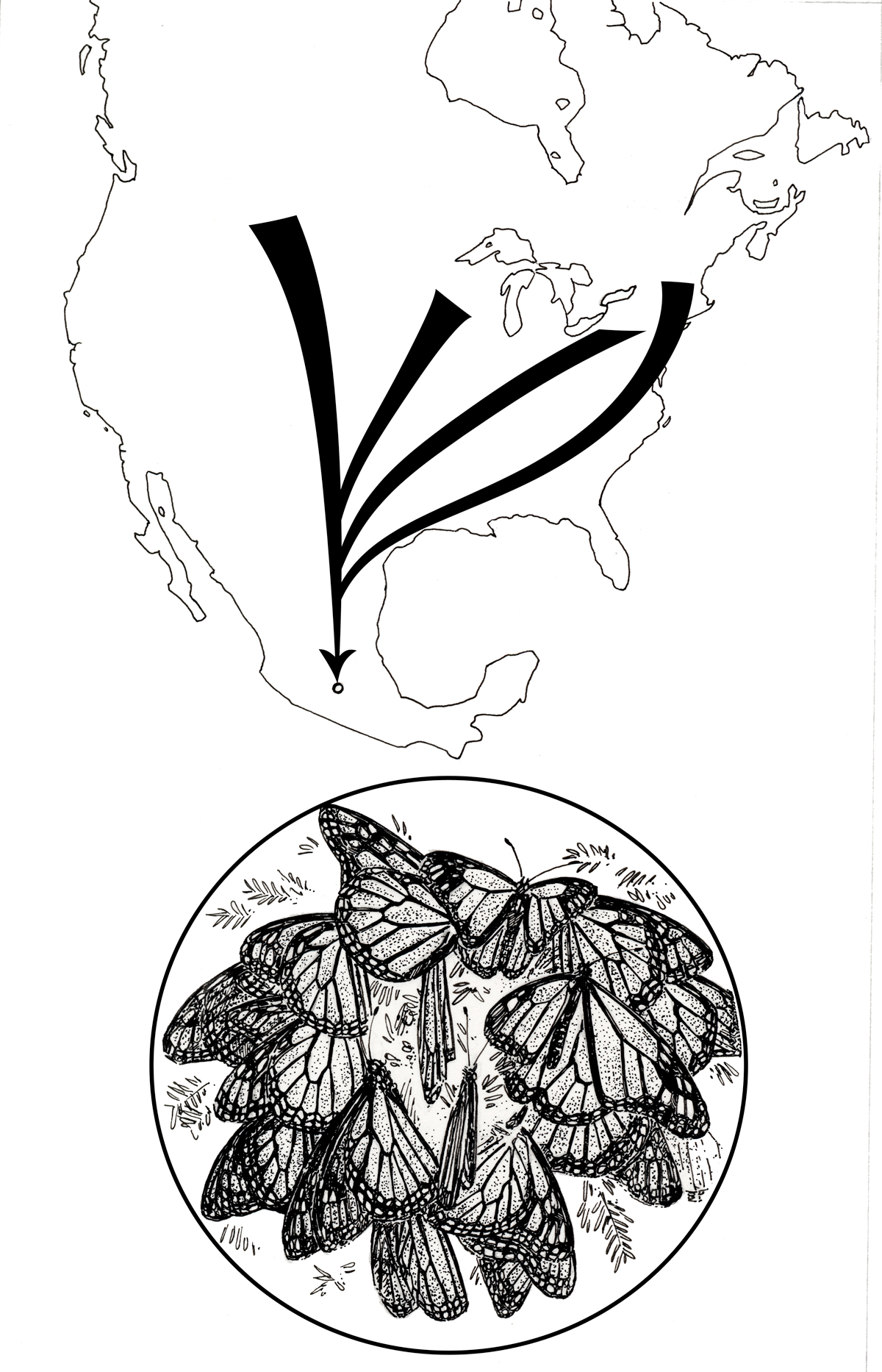 Monarch butterflies migrate for the northern United States down to Mexico where they roost in bunches in pine forests in the state of Michoacán (Illustration: Louise Zemaitis)

WILCOVE: It’s really an extraordinary migration. The butterflies begin moving south from the northeastern United States around August or September, and they funnel into this tiny area in Mexico where they will roost for the winter, and then in the spring, the survivors will head north, and they will hit the Gulf States, lay eggs and die. Those eggs will develop into the next generation of Monarchs, which will continue migrating north, they’ll lay eggs and die. And it takes about three or four generations until Monarchs have repopulated the eastern United States and Canada. And that last generation born in the summer is the one that will somehow know to go back to that small area in Mexico where their great-grandparents left the previous spring.

CURWOOD: When exactly are the monarchs supposed to arrive and what’s the cultural significance to folks in Mexico?

WILCOVE: Well, the monarchs arrive as we get into the late autumn beginning of the winter, and for some people in Mexico, it’s really part of the Day of the Dead celebrations, the idea being that the monarchs represent the souls of their departed loved ones returning to Mexico, returning to that set of forests in the mountains. The Monarch migration is also an important tourist draw. It’s such a beautiful phenomenon to see these millions of butterflies covering the trees that people from around the world come to Michoacan, Mexico, to see it. And so it’s become an important economic force in those communities, and of course, in a broader sense, it’s part of the world’s natural heritage because it is such a remarkable phenomenon.

CURWOOD: But this year, things were different. What happened?

WILCOVE: It appears as through the Monarchs are either very late in arriving at the site, or very few of them have survived making it down to Mexico. So we hope that it’s merely a case of them being very late, and that eventually we’ll get a healthy population, but there is the alarming possibility that the population has really crashed.

CURWOOD: What could put them at risk?

WILCOVE: The Monarchs face a number of problems. The one that’s gotten the most attention over the years has been illegal logging of the forests on that mountain in Mexico where they winter. So if you imagine the trees as providing a kind of thermal blanket for the butterflies, the illegal logging essentially means that we’re cutting holes in the blanket, and so when the cold weather hits, many of the Monarchs freeze to death. But there’s another issue that is starting to attract attention, and that’s the loss of the milkweed flowers that the butterflies lay their eggs on and rely on for their development. And it turns out that more and more farmers are planting crops that have been genetically modified so that they can withstand herbicides, and the farmers then apply herbicides to eliminate plants like the milkweed, which they view as a competitor with the crops. So unfortunately, as we’ve gotten cleaner, more industrialized, agricultural fields, we’re losing habitat for Monarchs and all sorts of other insects. 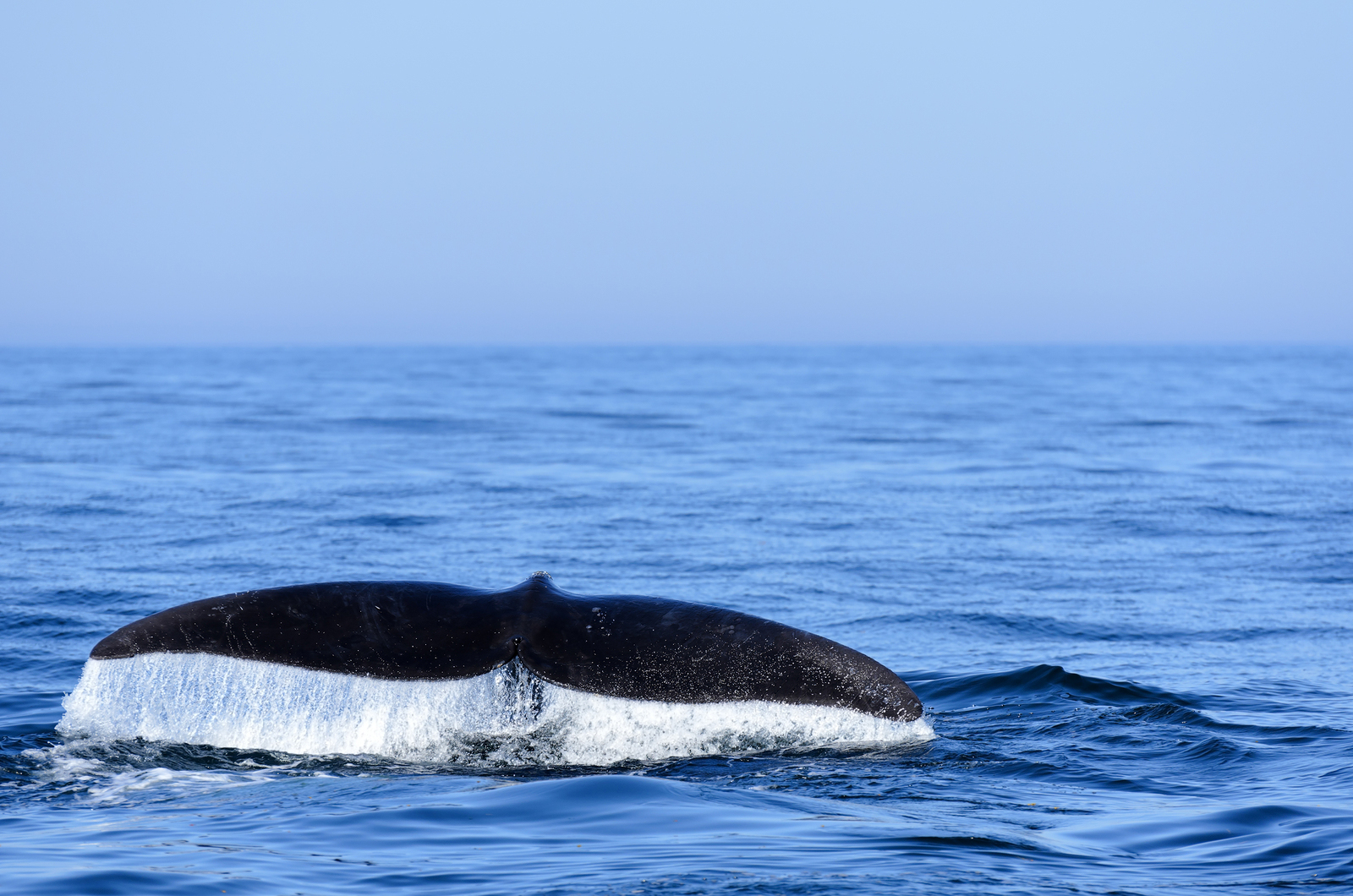 Northern Right whales are some of the most endangered mammals in North America (photo: bigstockphoto.com)

WILCOVE: That’s right. The Northern Right Whale’s a really interesting animal. It’s probably the rarest mammal in the United States. They’re only a few hundred of them left, and historically, a large percentage of the population has spent the summer in and near the Bay of Fundy where they feed on the abundant zooplankton there. However, this summer relatively few showed up. Now the folks who study the Right whales don’t believe that those animals that are missing have died. They think they’ve moved to another place for the summer, and they don’t know where they are. So it’s a concern because if you don’t know where they are, it’s much harder to protect them.

CURWOOD: What do scientists think is going on?

WILCOVE: They’re not certain. They know that these zooplankton, these little copepods that the whales depend on have shifted in abundance, and they think that that may be causing the whales to find new foraging areas for the summer. Why that is all happening is still a subject of research, but there’s a strong possibility that we’re seeing climate change here, changing the ecology of the Bay of Fundy, changing the food resources that the whales depend on, and causing the whales to move elsewhere. 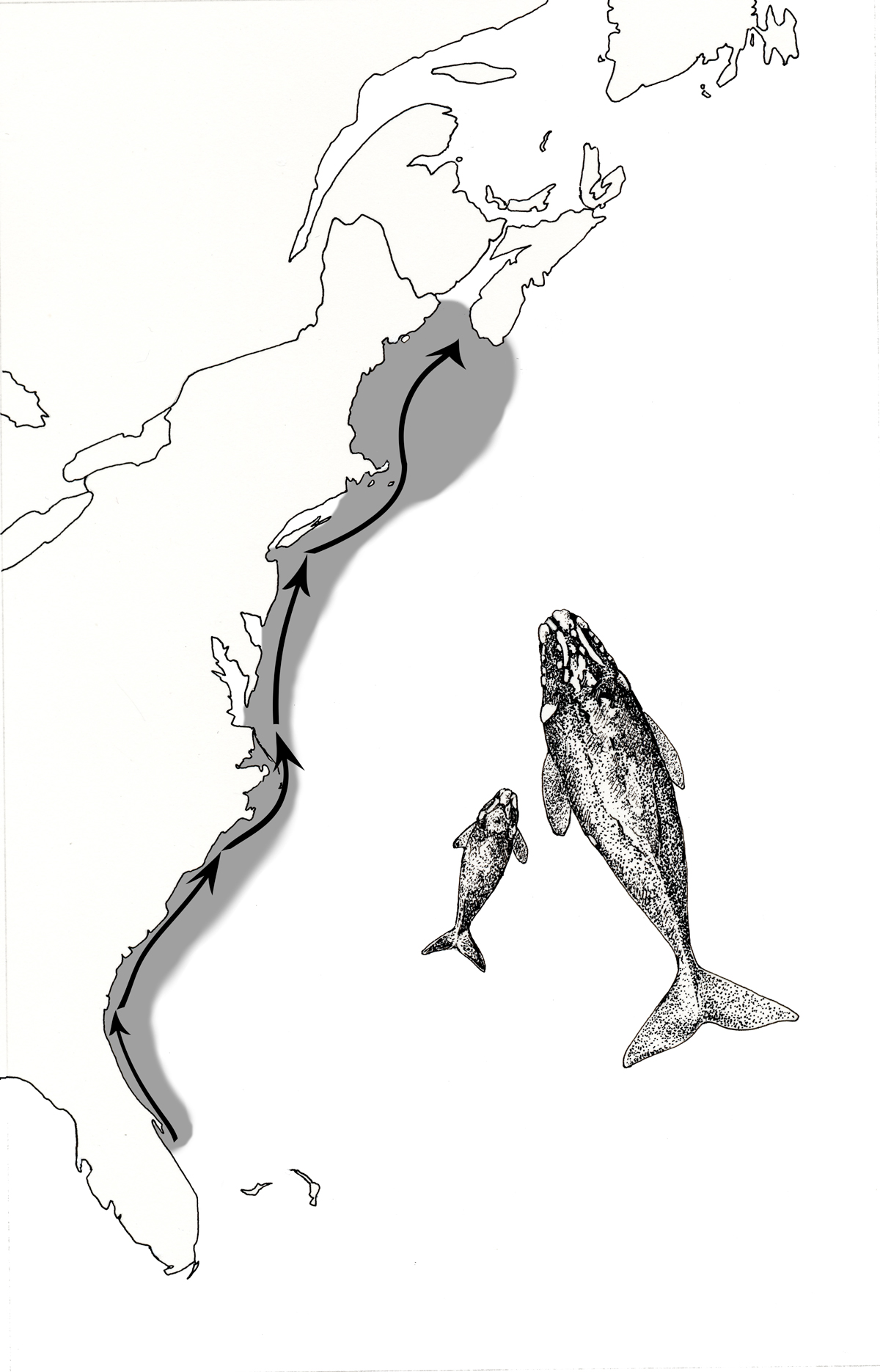 Northern Right Whales migrate from Florida to the Bay of Fundy, but this year the Right Whales haven’t showed up in Canada (illustration: Louise Zemaitis)

CURWOOD: Now of course one of the largest migrations in the world, and certainly spectacular is that of the Wildebeest in east Africa. Could you describe that for us?

WILCOVE: It really is a remarkable sight. I’ve had the great pleasure of watching animals in many parts of the world, and I think the Wildebeest migration in the Serengeti is just about the most spectacular thing I’ve ever seen. It’s over a million Wildebeests that move between Kenya and Tanzania in vast herds. They move to new places in response to the seasonal rains. So when the rains come to Tanzania and turn the Serengeti plains into this lush grazing area, the Wildebeests move down from Kenya to that spot, and then when they’ve depleted the grass, the rains are through so there isn’t a lot of forage to eat, they head back north. And what’s happened this year is that the Wildebeests seemed to have left Tanzania early to go back to Kenya because there wasn’t much forage for them in Tanzania due to a drought.

CURWOOD: How is this impacting tourism there in Kenya?

WILCOVE: Well, it’s probably beneficial to the Kenyans in the sense that tourists that want to see the Wildebeests at this time of year are going to go to Kenya instead of Tanzania. But it’s bad news for the Tanzanians because they won’t get the visitors that they would otherwise get. More importantly though it’s potentially bad news for the Wildebeests because this is an animal migration that is geared towards following the rains, capturing the grass that comes about as a result of those rains. If, as a result of climate change, rainfall patterns change it could pose real problems for the health of the Wildebeest population, or it could change the route of the migration and conceivably cause the animals to move out of the protected areas into places where they would not be protected.

CURWOOD: What impact would that have on the ecosystem as a whole? 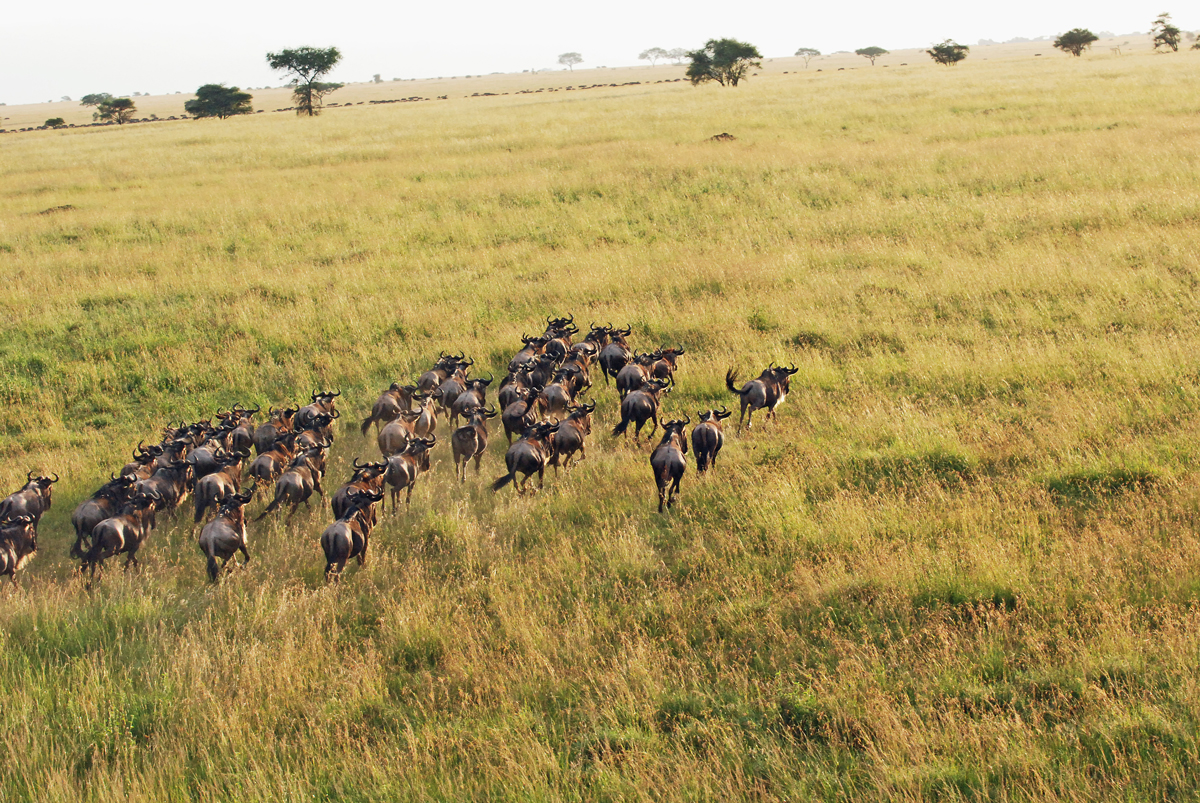 The wildebeest migration in East Africa is one of the world’s largest migrations (photo: Harvey Barrison)

WILCOVE: The Wildebeests are very important to that ecosystem. They are basically recycling nutrients because they’re consuming the forage, and then through their dung they redistribute nutrients. So it could have a major disruptive effect for many of the grazing mammals, any of the birds that occur in these savannahs.

CURWOOD: Generally, why do you think we’re seeing so many disruptions in the animal migration patterns?

WILCOVE: We’re seeing disruptions in the animal migration in large part because we’re disrupting the environment. You have to remember that migratory animals really connect different parts of the world, and so they’re sensitive to changes in any of those parts. When due to things like climate change or habitat alteration we change their summering grounds, wintering grounds or even the stopover sites...they’re going to respond. In some cases, their numbers are going to decline, or crash completely; in other cases, they’re going to have to find new places to go to. Either way, there are useful early warning signs of the types of disruptions that we’re creating in the environment. 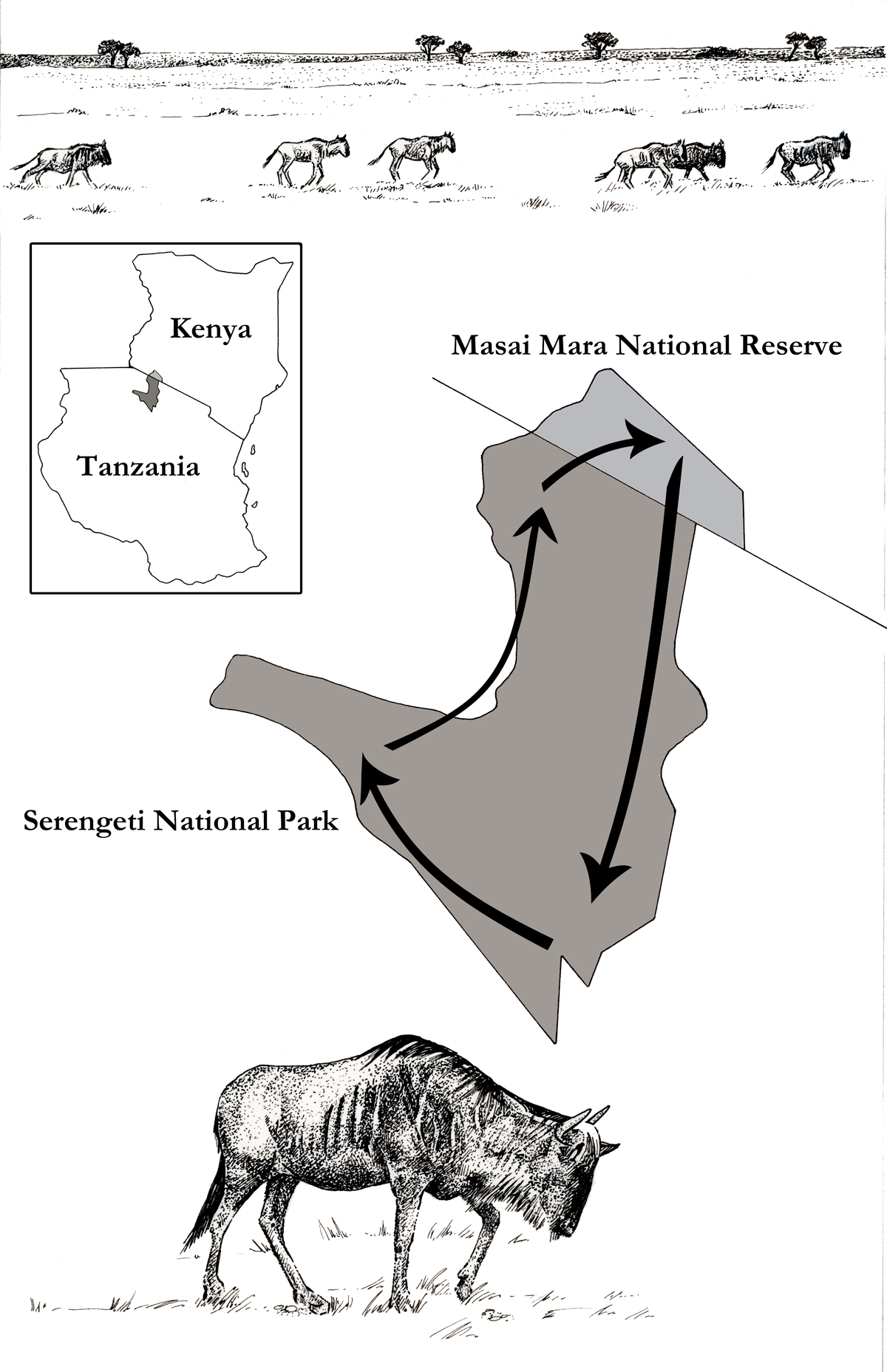 This year, the wildebeest headed back to the Masai Mara early, because of drought in the Serengeti Park in Tanzania (illustration: Louise Zemaitis)

CURWOOD: So far, climate change amounts to less than two degrees centigrade, about a degree centigrade around the world. How do you think climate change going forward would impact migration?

WILCOVE: It’s not just changes in temperature. It’s changes in precipitation, which can be very important for animals because those precipitation changes affect vegetation. It’s also changes in the extremes of heat, cold, drought, flood, all of that can be very disruptive to animal populations. We’re really basically reshuffling the deck and the consequences are going to be idiosyncratic and difficult to predict.

CURWOOD: What can we do to prepare for these changes and better protect migratory species?

WILCOVE: The best thing we can do, in my opinion, is to continue to protect natural ecosystems, to maintain connectivity between protected areas, so animals, plants, food; to restore connectivity where we’ve disrupted it, and of course take steps to reduce climate cange. 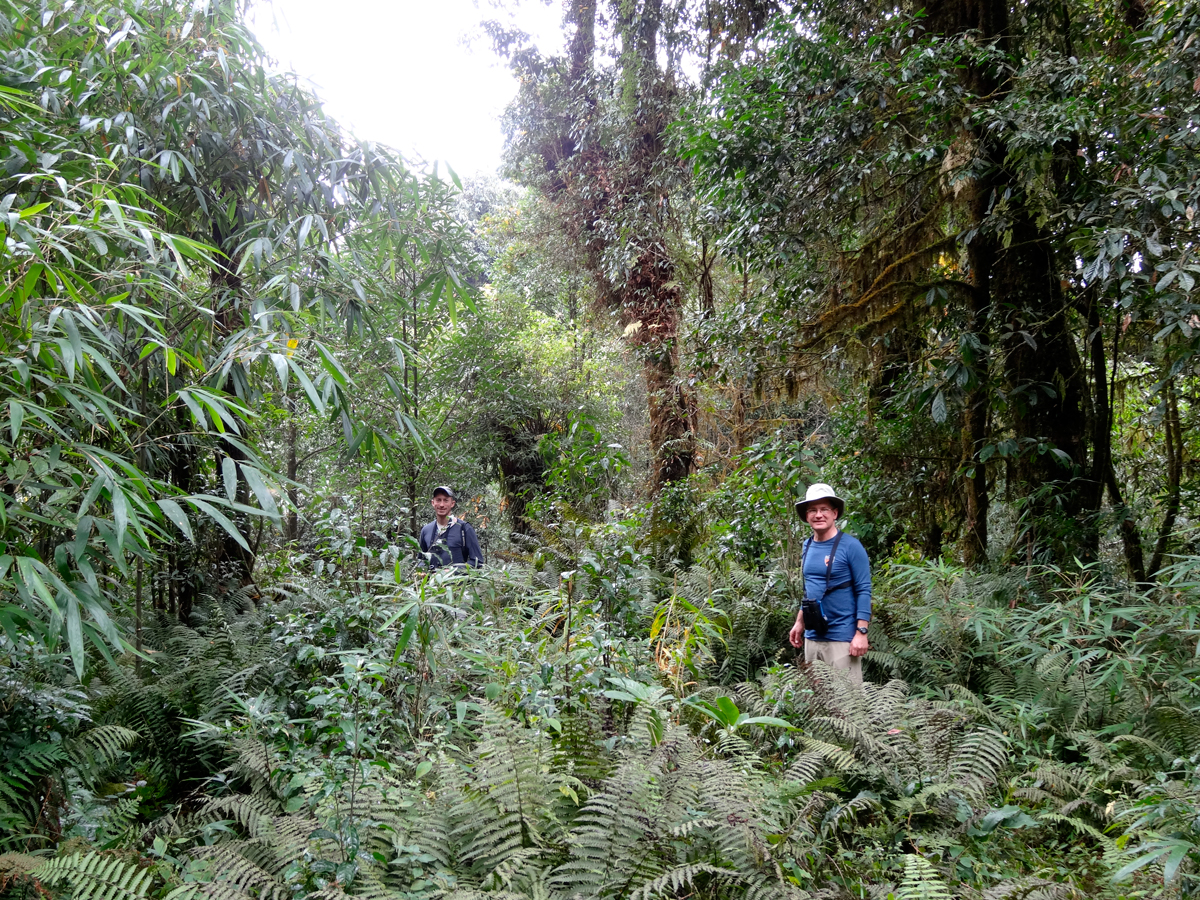 David Wilcove in a forest in Bhutan (photo: Paul Elsen)

CURWOOD: David Wilcove is a Professor of Ecology and Evolutionary Biology at Woodrow Wilson School at Princeton University and author of the book No Way Home, about migration. Thanks, David, for taking the time with us today.

WILCOVE: It's been a pleasure.