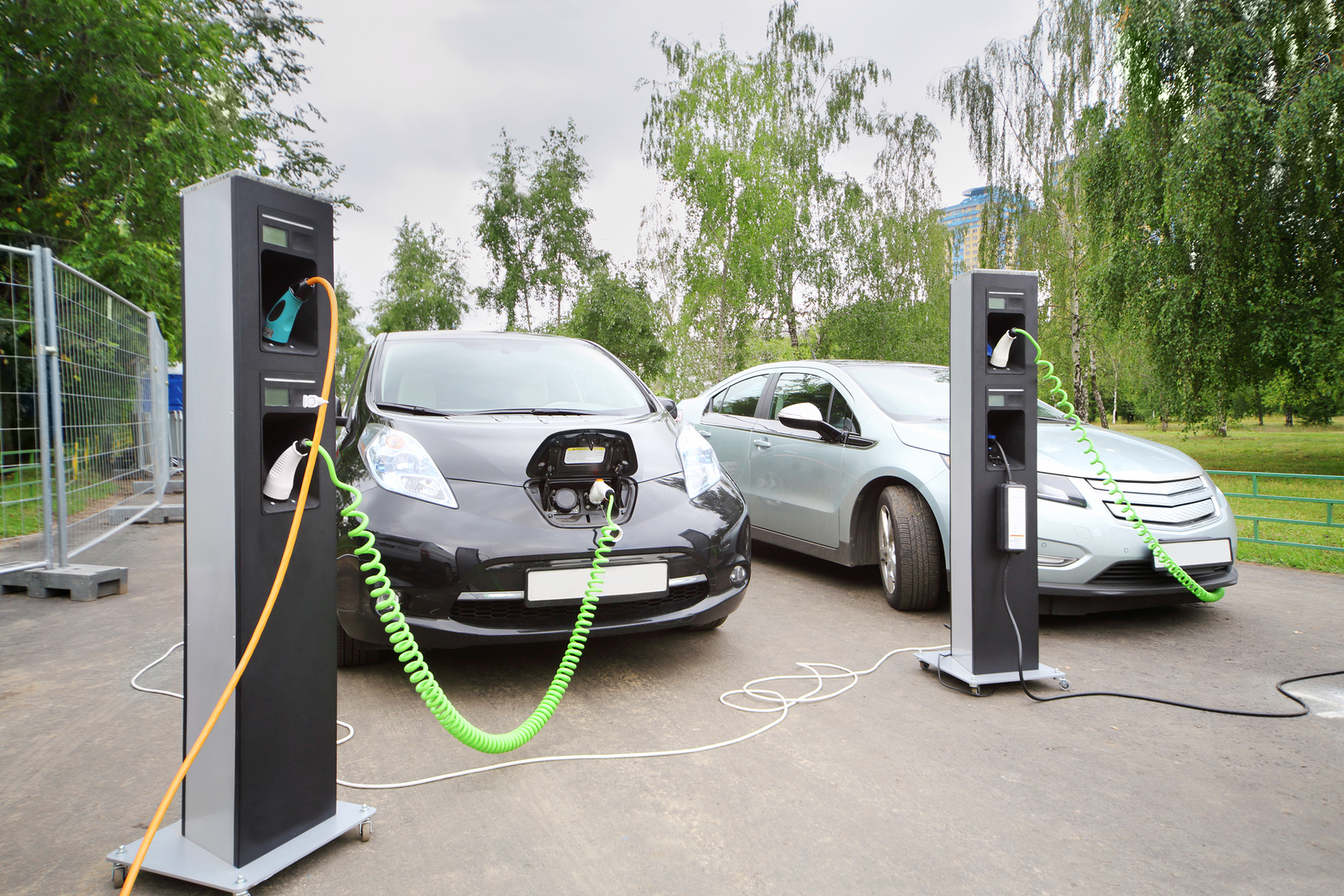 One of the challenges for EVs is building a network of charging stations that will help potential users get over their fear of running out of power. (photo: bigstockphoto.com)

Massachusetts and seven other states, including California and New York, have agreed to work together to increase the number of electric vehicles on roads. Massachusetts Environmental Protection Minister Ken Kimmel says the Bay State will use several strategies, from better charging stations to free parking, to reach these ambitious targets.

CURWOOD: It’s Living on Earth, I’m Steve Curwood. This week, another in our series Power Shift, about the transition to low carbon energy in the Bay State.

CURWOOD: Massachusetts recently teamed up with seven other states to promote the use of electric cars, by developing compatible systems of charging stations and financial incentives. The deal also calls for the states to help the public sector incorporate EVs into their fleets. Electric car sales have been increasing, but the numbers are still tiny. So to get EV's into the mainstream faster than the federal fuel standard rules require, California, Connecticut, Maryland, New York, Oregon, Rhode Island and Vermont are joining Massachusetts in this effort. Ken Kimmel is the commissioner of the Massachusetts Department of Environmental Protection. 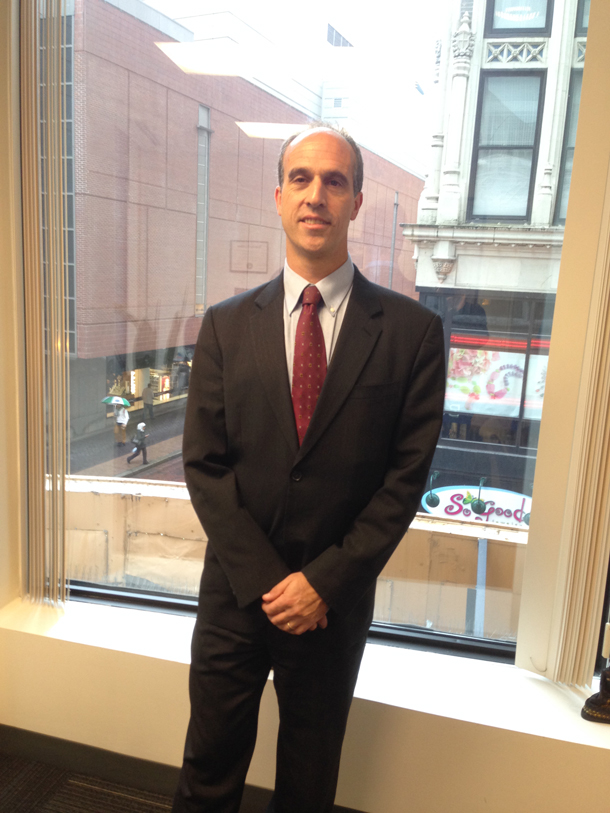 Massachusetts Environmental Protection Commissioner Ken Kimmell says his next car is going to be an EV, and he wants to be part of a crowd. (photo: Emmett FitzGerald)

KIMMEL: I think one of the lessons of environmental politics of the last number of years is that the states are way ahead of the federal government, and we’ve seen that, for example, in the regional greenhouse gas emission cap and trading where eight or nine states have cut emissions from power plants by about 50 percent, from 2005 to 2020, and we’re seeing again an interest in states leading the way as sort of laboratories of democracy. And I think that when states do this, they create a critical mass, and a tipping point where change is possible, where it gets made at the federal level or simply because of a percentage of the economy that we encompass, the auto manufacturers will comply with our demands because there’s so many of us and it will ultimately give them a signal that they should do on a national level. So that’s why these states all got together to do this, because there’s strength in numbers.

CURWOOD: Talk to me about the numbers involved here.

KIMMEL: Sure. So among the eight states that we’re talking about, we’d estimate that there are, right now, about under 100,000 EVs out there on the road. That needs to ramp up to 3.3 million vehicles by 2025. In Massachusetts, similarly we have we estimate about 2,000 zero emission vehicles on the road right now, that needs to ramp up to 300,000 by 2025.

CURWOOD: So, you’re talking about a big increase. What will be the climate impact of that do you think?

KIMMEL: It’ll be dramatic. We wlll gain very significant reductions in our emissions from the transportation sector, and it’s hard to calculate it and give you the exact number, but it will make a big difference, and it also aligns very well with the President’s Executive Order, or agreement that was signed with the auto manufacturers, to raise mileage standards from about 25 miles per gallon where they are now, to over 50 by 2025. The electric vehicles will be a key element of that larger national goal. 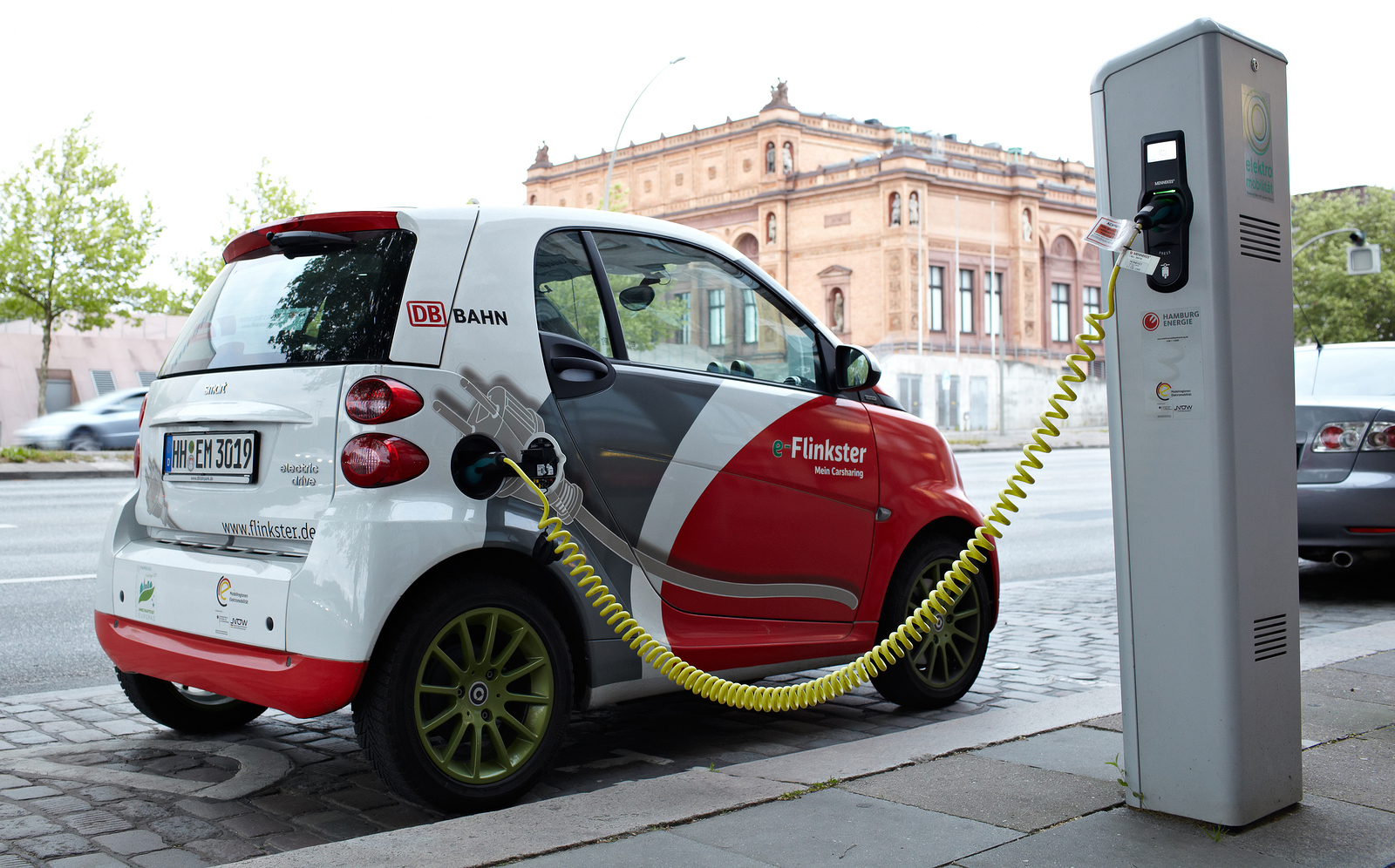 CURWOOD: So how does Massachusetts do its part?

KIMMEL: So there’s a lot of things that we are doing and need to continue to do. One is to deal with the fact that, currently, although this will change, the upfront cost of an electric vehicle is considered higher than the conventional car, and although you get a payback over the course of the vehicle because you’re saving a lot of money on fuel costs, for some consumers that’s an issue. There is a federal tax credit that addresses that, and we’re also looking, as we committed to do with the other states at other financial incentives that we can do to make cars more attractive.

KIMMEL: You know, potentially, differentials in sales tax based on people who buy EVs, grants and loan programs. One program that we just started which is very attractive is we’re giving a subsidy to municipalities who buy electric vehicles, and we’re paying a good part of the cost differential between the electric vehicle and the conventional one to encourage munis to buy these cars.

We’re going to do the same thing for public universities, and we’re also throwing in funding for charging stations. And the concept is that if you go to city hall, you’re going to see electric vehicles parked there with a charging station. You’re going to see that these work and people use them and will help to make them more attractive. The other thing that we can do, and we’ve agreed to do as part of the MOU is to look at some non-monetary benefits. So, for example, the possibility of electric vehicles being able to ride in high occupancy vehicle lanes, reserved parking or free parking for vehicles.

KIMMEL: Free or reduced rate parking. That’s definitely one of the tools.

CURWOOD: Now what about the question of road signs and charging networks to get some compatibility here?

KIMMEL: I think that’s key. I think this needs a lot of branding and easy visibility for consumers. We need to overcome the thing, the phenomenon called range anxiety and the fears people have that if they’re taking a trip there won’t be a network of charging stations, and they’ll get stranded. So a really thoughtful network of charging stations with signage, with Smartphone apps that tell you where to go to get the car charged is going to be critical, and that is clearly one of the things that we’re going to work on collectively to overcome.

CURWOOD: To what extent is this consortium of states going to look at using electric car batteries to buffer the grid? There’s been research done, particularly at the University of Delaware that shows that if the grid has access to car batteries, at times it can really reduce costs for the grid and actually the car owners can get payments.

KIMMEL: I think that is really one of the most exciting ideas, to think about electric vehicles in the context of smart grids, and the idea that you could charge up your vehicle late at night when the price of electricity is very very low and get a benefit that way, and then if there are certain peak periods where there’s problems with the grid as a whole, this whole network of cars could send energy back into the grid when it’s most needed. This would be great for the consumers. It would again provide a significant financial advantage to them but also it could be massive energy storage network that could help us deal with those occasional reliability problems and blackouts. Syncing up the grid with electric vehicles and thinking about electric vehicles not just as transportation mechanisms but potentially stores of energy for the whole network is a great idea.

CURWOOD: So overall, what do you see as the future for electric vehicles in your state, Massachusetts?

KIMMEL: I think the future’s bright. I think we’re really well poised to take advantage of this, we have a good mix of government policies that will drive it. We have people who are receptive to electric vehicles. We certainly have firms that are engaged in battery research and the underlying science so there will be economic benefits to Massachusetts if these technologies take off, and I think it’s a matter of patient, persistent education and outreach, and creating the infrastructure to allow people to take advantage of these new technologies. So I think the future’s quite bright.

CURWOOD: Ken Kimmel is the Commissioner of the Department of Environmental Protection in Massachusetts. Thank you, Sir.

KIMMEL: Thank you very much. It was my pleasure.


Read the EV Memorandum of Understanding