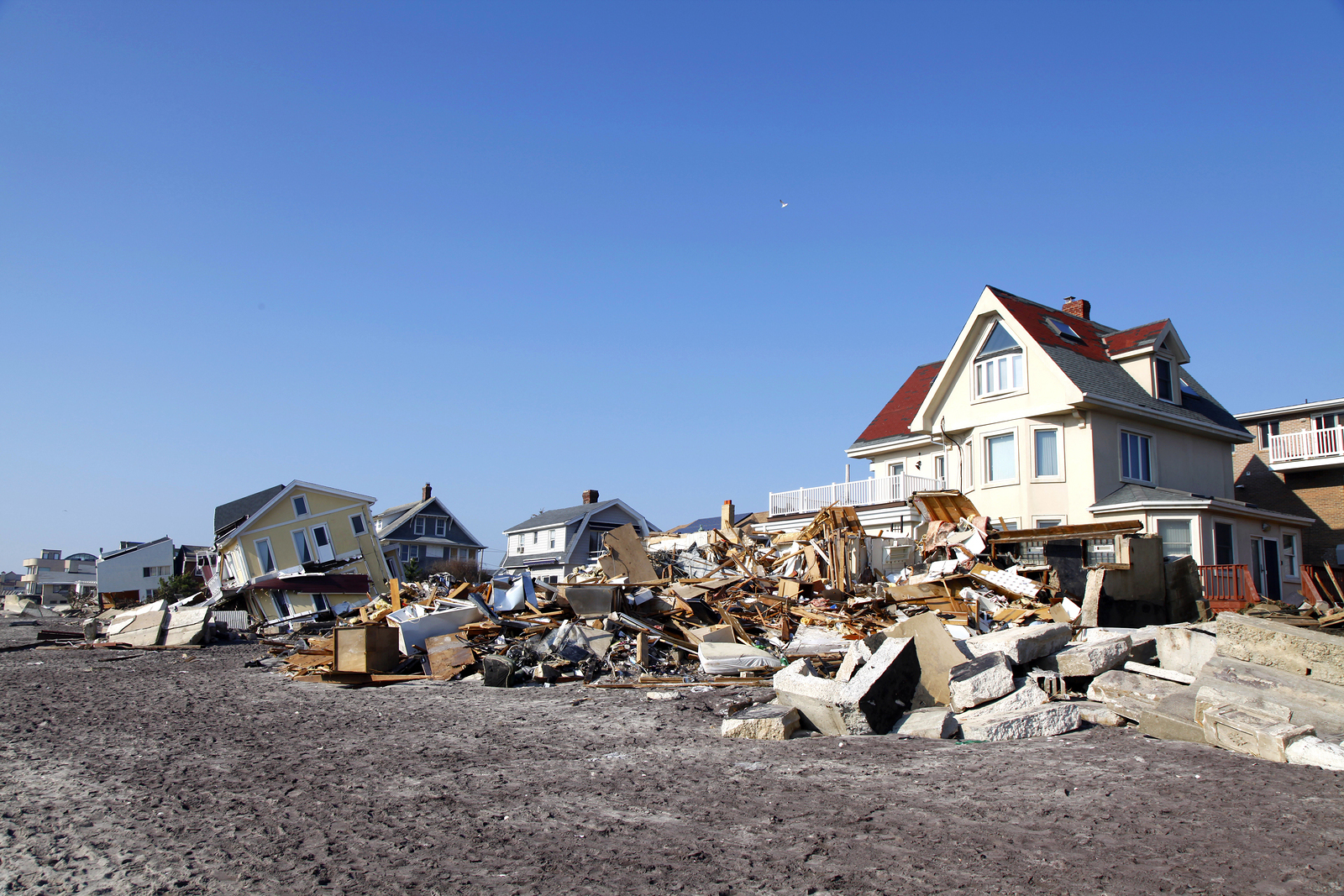 Sandy caused destruction all along the NY/NJ shore (photo: bigstockphoto.com)

CURWOOD: Superstorm Sandy got a boost from unusually warm waters in the West Atlantic, warmth that is expected to increase in years ahead as the climate changes. And though the US Congress has yet to directly enact mandatory limits on global warming gases, Theo Meyer recently made an interesting discovery. The ProPublica reporter discovered that lawmakers did pass a piece of climate change legislation last year before the storm struck. Tucked in the very back of a huge Transportation bill, Meyer found language directing the federal government to consider climate change when it comes to subsidized flood insurance.

MEYER: So this was a massive 584-page Transportion Funding bill. A subset of this bill was called the Biggert-Waters Flood Insurance Reform Act, and there are a few lines in this subset of the bill that actually deal with climate change. It's one of the few places in which climate change and rising sea levels are explicitly mentioned in any federal legislation passed in the last two decades. 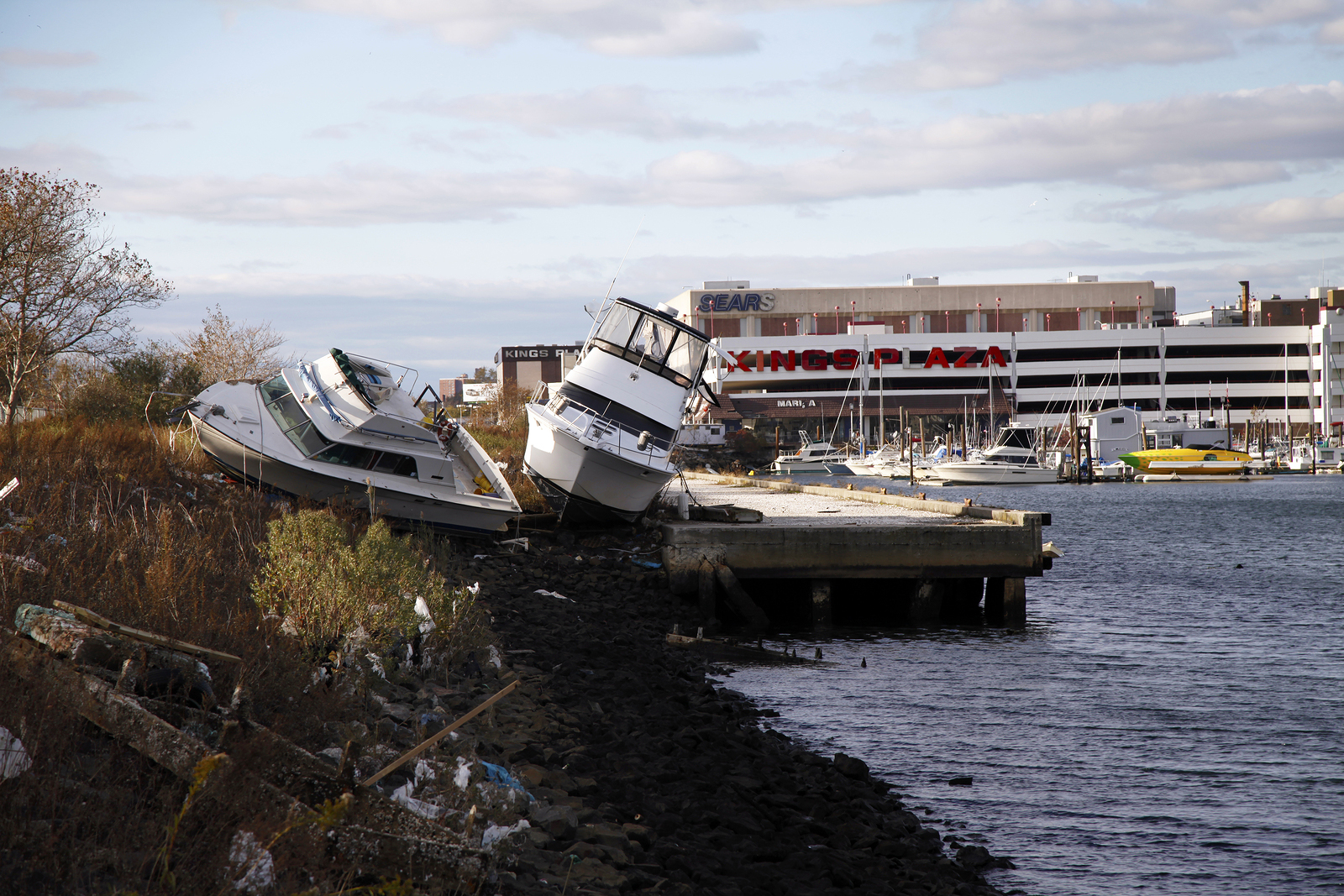 CURWOOD: And what exactly does it say about climate change and rising sea levels?

MEYER: So it requires the Federal Emergency Management Agency or FEMA to use the best available climate science when updating its flood insurance maps and at least figure out a way to take rising sea levels into account in those maps.

CURWOOD: Now before you wrote your story, how well known was this?

MEYER: It was actually not very well known at all. I struggled to find people who were even familiar with this section of the bill.

CURWOOD: To what extent do you think the members of Congress and the Senators knew about this when they voted on the transportation bill?

MEYER: Well I know the entire section of the bill that dealt with flood insurance was not discussed on the floor of Congress, and in fact received very little debate. One of the two authors of the bill - it’s the Biggert-Waters law - one of those two members, Judy Biggert, is out of Congress now and the other member, Maxine Waters, she's actually come out against some portions of this spill after it became apparent how it would raise flood insurance rates for some people in risky areas around the country. The provision of the bill raising flood insurance rates for some homeowners went into effect this month.

CURWOOD: Who do you think put this measure into the bill?

CURWOOD: So FEMA has been directed by law now to take climate change into account with the flood insurance program. So how's the agency doing? 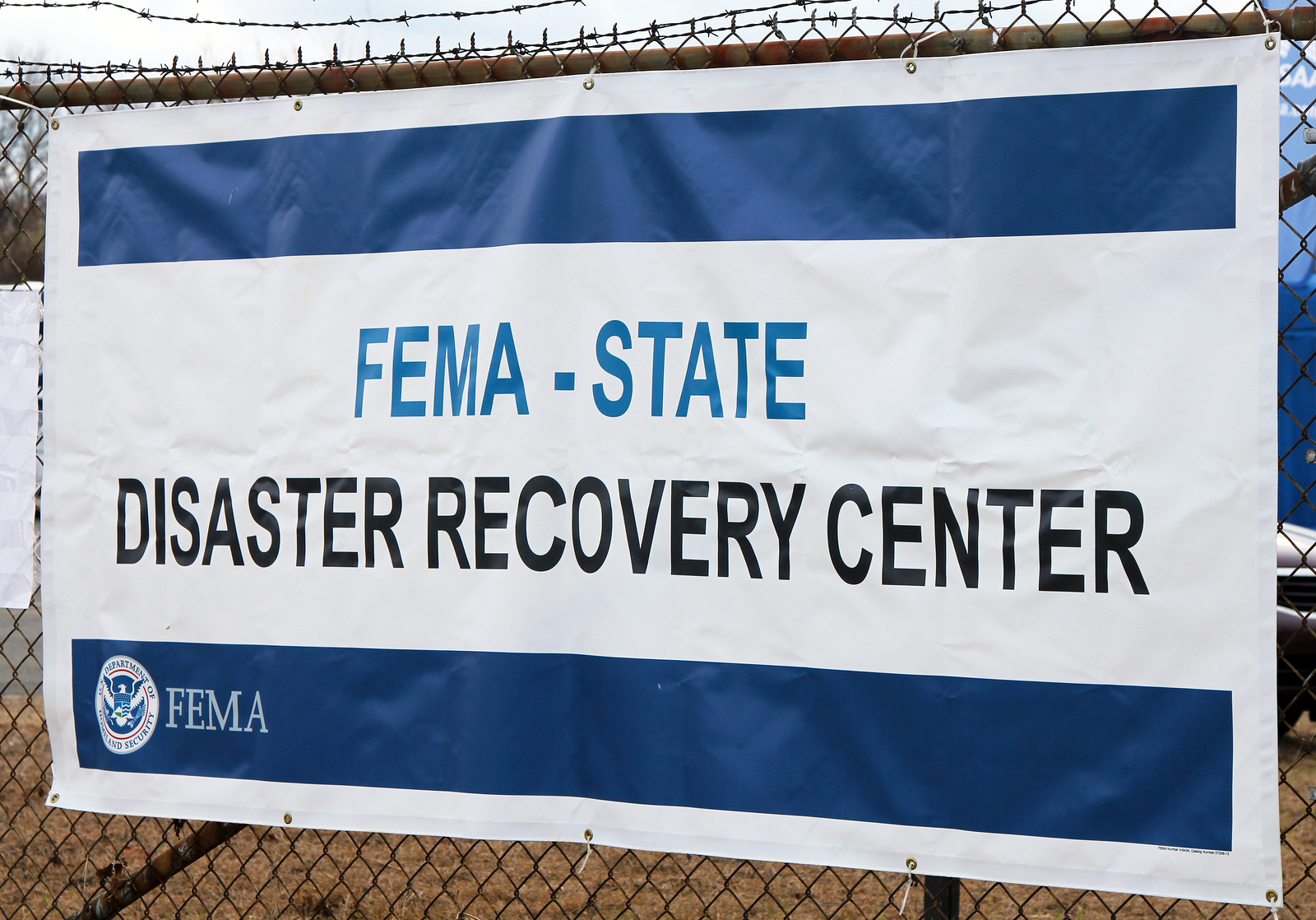 FEMA’s flood insurance program is one of the government programs most directly impacted by climate change and sea level rise (photo: bigstockphoto.com)

MEYER: It's not doing so well. The bill required the agency to set up this council called the Technical Mapping Advisory Council. They didn’t set hard deadlines for doing this, but it said within a year of when the law was passed. This council would have to produce a report with some initial recommendations on how conditions were changing, and how FEMA could make preparations for the future. It hasn’t produced that report, and did not produce that report by the deadline in July because the council in fact has no members.

I talked to FEMA a bit ago before the government shutdown started, and they told me they were in the process of finalizing letters to be drafted to recruit people to sit on this council with the hope that it would meet some time in the fall. I reached back to FEMA for more comment when we ran this story, but it was during the government shutdown and some of the members of the agency who would be required to answer it were furloughed at the time.

CURWOOD: Now, Theo, as I understand it, this summer FEMA did release a report that documents the impact of sea level rise. What exactly did that report say? 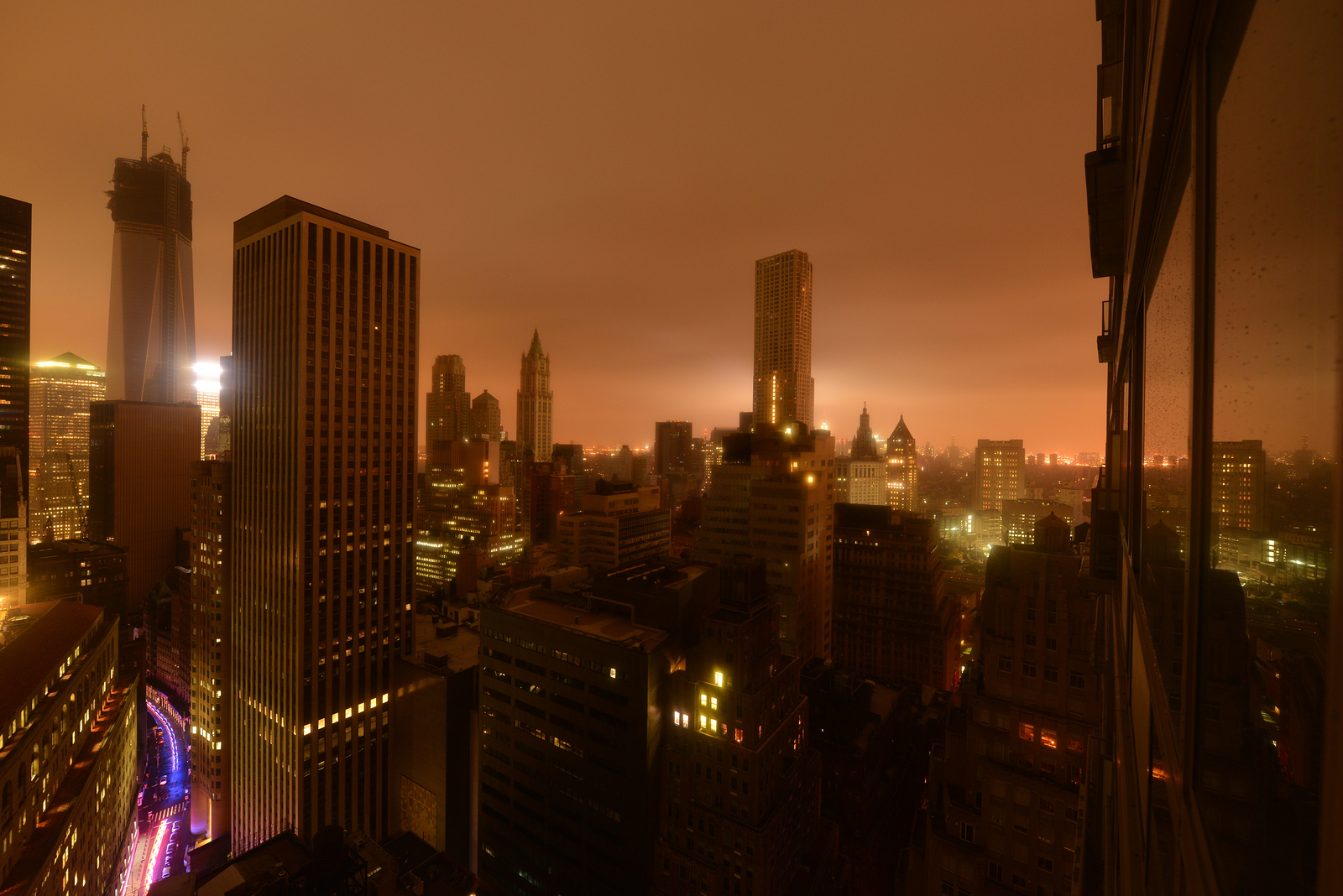 Sandy caused destruction all along the NY/NJ shore (photo: bigstockphoto.com)

MEYER: They did. It was a report done by a private contractor for FEMA that had been in the works for several years, I believe, and it was about the impact of rising sea levels, the potential impact on the flood insurance program. The report found as other reports had found previously, estimated that sea levels could rise four feet by 2100, but the new finding was that the portion of the country at high risk of flooding in what are called special flood hazard areas - those are places where homeowners are required by law to buy flood insurance if they have a federally backed mortgage - the report found that those areas would increase by 45 percent by the century’s end, and that the number of Americans who live in those areas could double, with most of that increase due to those rising sea levels and to climate change.

CURWOOD: So this is huge! If we’re going to have almost a 50 percent increase in this area, perhaps the doubling of the people there, this would really bulk up this program.

MEYER: Yes, and this is a program that is already not doing so well. It has been flagged by the Government Accountability Agency as one of the federal programs that is in trouble. It fell deeply into debt after Hurricane Katrina in 2005, and deeper still after Hurricane Sandy. It's currently about $25 billion in debt, and it doesn't really have a way to pay that money back.

CURWOOD: Now, why do you think FEMA has been so slow to act, given that they acknowledge the seriousness of the problem?

MEYER: Well it's a little unclear to me, but FEMA has certainly had its other struggles to deal with this year. When this reform bill was passed, Hurricane Sandy hadn't yet hit, which is obviously taking up a great deal of FEMA’s energy, and there have been very vocal protests against these proposed flood insurance hikes that have now gone into effect, so I think FEMA has spend a lot of time dealing with those as well.

CURWOOD: One of the issues about flood insurance has been that the government subsidizes risky development - redevelopment in places where perhaps people shouldn't be rebuilding. Can you tell us about that? 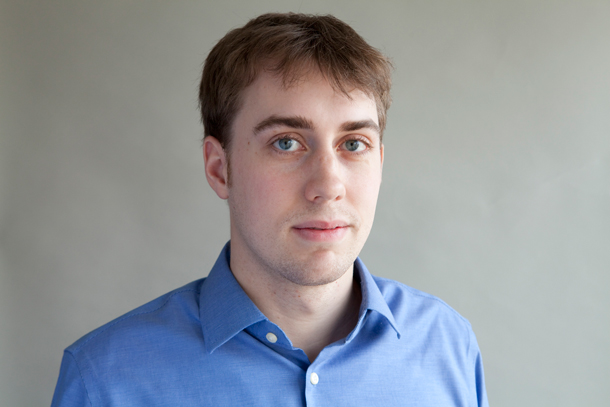 MEYER: Yes, there actually are a number of government programs that subsidize development and redevelopment sort of in risky areas along the shoreline. One of those is the National Flood Insurance Program Act, but there are others as well. The government has spent vast sums of money on beach nourishment, matching or paying for most of the cost of pumping sand onto beaches from New England on down to Miami. That can be an incentive to develop along that coastline and to build hotels and vacation homes and what have you there if the people who live there are not paying the whole cost of making sure that those beaches have sand on them.

CURWOOD: To what extent do you think we should be rethinking how we do flood insurance in this country?

MEYER: Well, I think a lot of people would tell you that the reforms that were passed last year were actually a step in the right direction. The number of policies that are subsidized is forecast to slowly slowly slowly go down over the next few years, although it's certainly hard on policyholders who are used to paying $500 or $1,000 dollars a year for flood insurance, and are now seeing their policies jumped to $10,000, $15,000 a year in some cases we’ve we've heard about, although it's unclear exactly how many of those cases there are. So one thing that's been proposed is some sort of government payout that would make flood insurance more affordable for people who truly can’t afford it.

CURWOOD: Theo Meyer is a reporter for ProPublica. Thank you so much for taking the time today, Theo.

MEYER: Thank you for having me.

Check out ProPublica’s series “After the Flood”