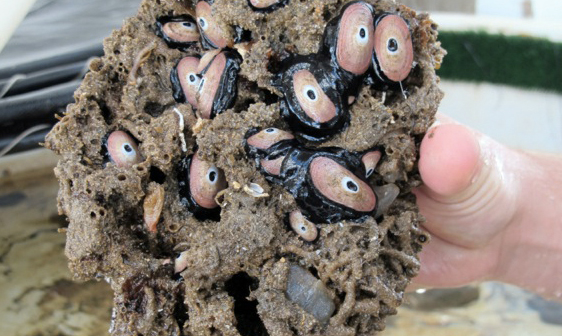 Researchers in Southern California are cultivating an unusual marine mollusk that could prove vital to the future of cancer vaccines. Lauren Sommer reports as part of the EYE-TRIPLE-E Spectrum Magazine, National Science Foundation special, "The New Medicine: Hacking Our Biology".

CURWOOD: Think medical breakthrough, and you're apt to picture a high-tech lab with gleaming steel equipment. But medical advances can also come from nature, such as the seaside.

In Southern California, researchers have found a way to grow an unusual marine mollusk that may play a major role in future vaccines. Lauren Sommer went to explore this unique laboratory site - her story comes to us from the EYE-TRIPLE-E  Spectrum Magazine, National Science Foundation special, "The New Medicine: Hacking Our Biology".

SOMMER: When you think of cancer treatment, this probably isn’t the scene you’d imagine. But this rocky strip of land in Port Hueneme in Southern California is home to a unique medical facility.

LINCICUM: So, what you’re seeing right now is - this is our primary production seawater system. Essentially, we pump nutrient-rich seawater right over here from the port. We really just remove big particulate matter before it flows into our production tanks.

SOMMER: Brandon Lincicum is the aquaculture manager for Stellar Biotechnologies. We’re standing next to large tanks just a stone’s throw from the Pacific Ocean.

LINCICUM: Take a look at some of these guys. OK, so, this is what you’ve been waiting to see. This is Megathura crenulata right here, the giant keyhole limpet.

SOMMER: Lincicum reaches into the tank and pulls out a round, purplish animal that looks like an abalone.

LINCICUM: They do have a hard shell, but they have this mantle tissue that they can fold up over their shell so you know, when you touch these guys, they are almost soft. It’s almost...
SOMMER: A little slimy.

SOMMER: The limpet he’s holding weighs almost a pound, but it takes years for them to grow this large.

SOMMER: This is the only place in the world where giant keyhole limpets are bred and grown. And there are thousands here, each with their own unique tracking number. The question is, why?

OAKES: It pretty much is a nondescript member of the local California coastal environment but turns out to be really important when it comes to medical technology.

SOMMER: Frank Oakes is the CEO of Stellar Biotechnologies. He says what’s special about giant keyhole limpets is their blood—or more specifically, something found in their blood called KLH.

OAKES: Keyhole limpet hemocyanin. And then, hemocyanin is the protein from the blood, analogous to hemoglobin in humans.

SOMMER: This unique blood protein, KLH, has been studied since the 1950s, and it’s played a major role in immune system research. But the keyhole limpet is only found in Southern California, which means there’s a limited supply.

OAKES: It was harvested routinely for extraction of its blood, and with little regard to understanding the animal, its importance in the wild, or the perishability of the wild population.

SOMMER: Oakes has a background in aquaculture, so he began studying how to breed limpets in captivity.

OAKES: In the late 1990s, we started work on developing nonlethal extraction methods for the animal, so we can take the blood without killing them.

SOMMER: Getting limpets to grow in captivity was no easy task. Oakes had to learn how to coax them into reproducing. He had to learn what conditions they grow best in. And because the limpets are part of medical research, there has to be strict quality control to prevent contamination. Today, thousands of limpets go through their entire life cycle in a controlled system, giving blood several times a year.

SOMMER: Why would a blood protein be so valuable?

CHOW: Without it, a lot of the vaccines will not work.

SOMMER: Herb Chow is a vice president at Stellar Biotechnologies. He says to understand why KLH is useful, you have to go back to the early days of vaccines. Medical researchers would take something harmful like a virus, kill it, and then inject it into your body. Your immune system would see the inactive virus and it would learn how to attack it.

CHOW: Except if you use the dead virus or dead bacteria, it does accomplish that activation or stimulation, but it comes with a price. The price is some level of toxicities: People get sick because the toxin is still there.

SOMMER: So researchers took viruses apart, pulling off the small chunks that your immune system could attack. They injected those smaller pieces as the vaccine, but there was a problem.

CHOW: Just too small. They don’t see it. So it becomes stealth to your immune system.

SOMMER: And like a stealth plane, if your body doesn’t see it, it can’t learn to attack it. But attach those virus pieces to KLH, and it’s like attaching reflectors to the plane.

CHOW: By putting two together, all of a sudden the radar starts seeing it.

CHOW: The problem with the cancer cells is a lot of the antigen that are expressed on the cancers is actually your own tissues. The body sees them: This is my own, I shouldn’t react to it.

SOMMER: Cancer cells are, in essence, your own cells. So your immune system doesn’t see them as foreign invaders.

CHOW: And, as such, it fools your immune system to kind of ignore them and let them keep growing. And when the tumor mass gets to be a certain size, then your body no longer be able to handle it.

SOMMER: So doctors use treatments like radiation and chemotherapy, which target all fast-growing cells in your body. But Chow says that’s why cancer vaccines have such promise.

CHOW: It’s something that it’s high on the radar screen because of the characteristics - that they can differentiate the normal cells from the tumor cells and be able to target the treatments to the tumors.

SOMMER: Cancer vaccines could train your body to only attack the cancer cells. Chow says the challenge is finding something on cancer cells that would help your immune system differentiate them from your own cells.

SOMMER: Today, most of the cancer vaccines that use KLH are still in the research phase or in clinical trials. But CEO Frank Oakes says the role of KLH is looking promising.

OAKES: The long-term commercial demand for KLH looks very promising because it’s a key ingredient in a wide variety of drugs that are currently in clinical development.

SOMMER: The challenge is that vaccines take decades to develop - and not all of them come to market.

OAKES: Unfortunately, in this business, more drugs fail in clinical development than succeed.

SOMMER: But Oakes says with the growth in cancer vaccine research, there’s a good chance that this mollusk from Southern California will eventually play a role in keeping us healthy. In Point Hueneme, I’m Lauren Sommer.