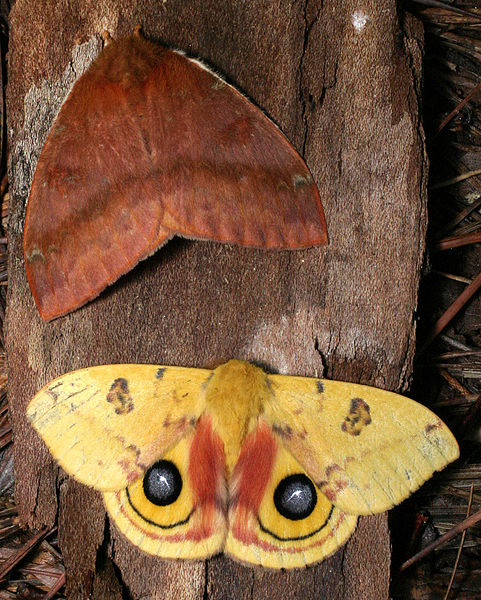 From July 20th to 28th, citizen scientists in the US and forty other countries celebrated National Moth Week, by taking moth walks and heading out with flashlights to find the elusive night-fliers. Ari Daniel Shapiro reports.

CURWOOD: Citizen science is a trend that's spreading. From July 20 to 28, people in 40 different countries as well as the US prowled around at night to celebrate those fluttering denizens of darkness - the moths. There's been moth spotting, and moth slumber parties, as well as lectures and night walks from Bhutan to Belgium and New Zealand to Norway. And reporter Ari Daniel Shapiro has been checking out some of the events here in the US.

SHAPIRO: There are countless animals that have a kind of power over humans that lure us in, that compel us to write mythologies, that make us gaze through a pair of binoculars. Usually the animals are big, charismatic things - like tigers, or pandas. But charisma can come in much smaller sizes too, and trigger just as powerful an attraction. It’s this appeal of the small that turned people out in droves.

MOSKOWITZ: They’re amazing. Let it settle - now you can see those red underwings.

WOMAN: Wow.
KID: Oh, wow, that’s like, awesome.
SHAPIRO: We’re in Frost Woods Park - a patch of green in East Brunswick, New Jersey, and our first of three stops. It’s nighttime - about 9pm. And these couple dozen kids, parents, and neighbors are on the lookout for moths.
MOSKOWITZ: There’s something kinda magical about being out at night with all kinds of biodiversity - everything from the size of a pinhead up to a moth as big as your hand.
SHAPIRO: David Moskowitz is the co-founder of something called National Moth Week. In late July, for an entire week, over 300 hundred moth-inspired events were hosted in every state in the US - except North Dakota...
MOSKOWITZ: North Dakota, where are you?

SHAPIRO: ...and in numerous places around the world – Costa Rica, Gambia, Bulgaria, even the Azores in the middle of the Atlantic.

MOSKOWITZ: There’s always something to find. It’s like a treasure hunt.

SHAPIRO: The other co-founder, Liti Haramaty, says National Moth Week’s intended, in part, to cast aside the view that moths are just a swarm of ugly, winged pests.
HARAMATY: Some of them are as beautiful as butterflies, or even more beautiful than butterflies.
SHAPIRO: Such as the io moth, or Automeris io, Haramaty’s favorite – a bright yellow one with two big black eyespots on its wings. She says that looking for moths can be really rewarding. For one thing, in the US, moths outnumber butterflies by about 15 species to one, not to mention that finding moths at night is pretty easy.
HARAMATY: All you have to do is turn on a light at night, and they’ll come to you - you don’t have to go look for them.
[GENERATOR POWERS UP]
SHAPIRO: Two and a quarter miles above sea level, perched atop the continental divide of Cottonwood Pass in central Colorado - our second stop - a generator roars to life, powering a bright light. It’s nighttime, and the faces of a dozen people light up in its soft blue glow. Most of them are lepidopterists - who study moths and butterflies by profession. Someone’s unrolled a screen in front of the halogen - to catch the moths flapping through the cold mountain air.
LANDRY: It’s a hepialid - [Korscheltellus] gracilis. For the first time in 30 years.

ADAMS: Hold on just a second - it looks like there’s something much bigger on the other side. Oh yeah, here we go. Here’s a noctuid. I think it’s a Lasiestra. It’s still kicking a little bit.

SHAPIRO: Jean-François Landry, who drove here from Quebec, James Adams, who flew in from Georgia, and the rest of the group are collecting these high elevation moths.
LANDRY: In terms of unknown diversity – new species, this is kind of the frontier.

SHAPIRO: By far the youngest person up here is Megan McCarty. She’s 16, from Indiana, and is an avid lepidopterist in the making.
M. MCCARTHY: Oh, this is just a killing jar. I basically put moths in here, and I have poison in here. And then I’ll put them in my collection.
SHAPIRO: Her dad, David McCarty, has tagged along too.

D. MCCARTHY: I’m a supporter of moth love. I like to see the action, but it’s just something that Megan does. I like birds.

SHAPIRO: Our last stop is in the middle of the island of Oahu, in Hawaii up past a series of pineapple plantations on a lush path in the Ewa Forest Reserve. It’s usually closed to the public. That’s because this trail runs along a knife-edge ridge, only 25 feet wide, with a drop on either side. But Cynthia King, an entomologist from Hawaii’s Division of Forestry and Wildlife – is keeping careful watch over the 17 people who’ve assembled in the fading daylight.
KING: Everybody else have their stuff - water bottle, flashlight, rain jacket? Awesome.
[GUST OF WIND]
SHAPIRO: A strong gust of wind sweeps across the ridge. Wind’s not good for spotting moths - it doesn’t allow them to settle on the lit-up sheet.
But it turns out it was ancient winds that blew most of Hawaii’s moth species - 850 and counting - from the mainland out to its islands. That’s why the moths in Hawaii tend to be smaller than the ones you’d find in North and South America. Little moths can travel much farther on the wind.
Finally, the breeze settles down, and a single moth emerges out of the darkness. A tiny, mottled flutter.
KAWELO: Oh, ooh.
[BAG OPENING]
SHAPIRO: Kapua Kawelo, who’s out here with her two kids, gently lowers the moth into a baggie.
[FLUTTERING]
KAWELO: Hey, there’s a moth over here. You guys wanna check it out?
SHAPIRO: Cynthia King comes over to investigate.
KING: This is a little sphinx moth.
SHAPIRO: Or Hyles wilsoni perkinsi. The group spots another several moths but before long, it’s time to pack it in.
They head back, walking carefully along the ridgeline. And they talk softly about searching for such small treasures beneath the night sky. Their headlamps twinkle along the path like a constellation of slow moving stars.
For Living on Earth, I’m Ari Daniel Shapiro.
CURWOOD: Our story about National Moth week comes from the series “One Species at a Time," produced by Atlantic Public Media, with help from The Encyclopedia of Life.