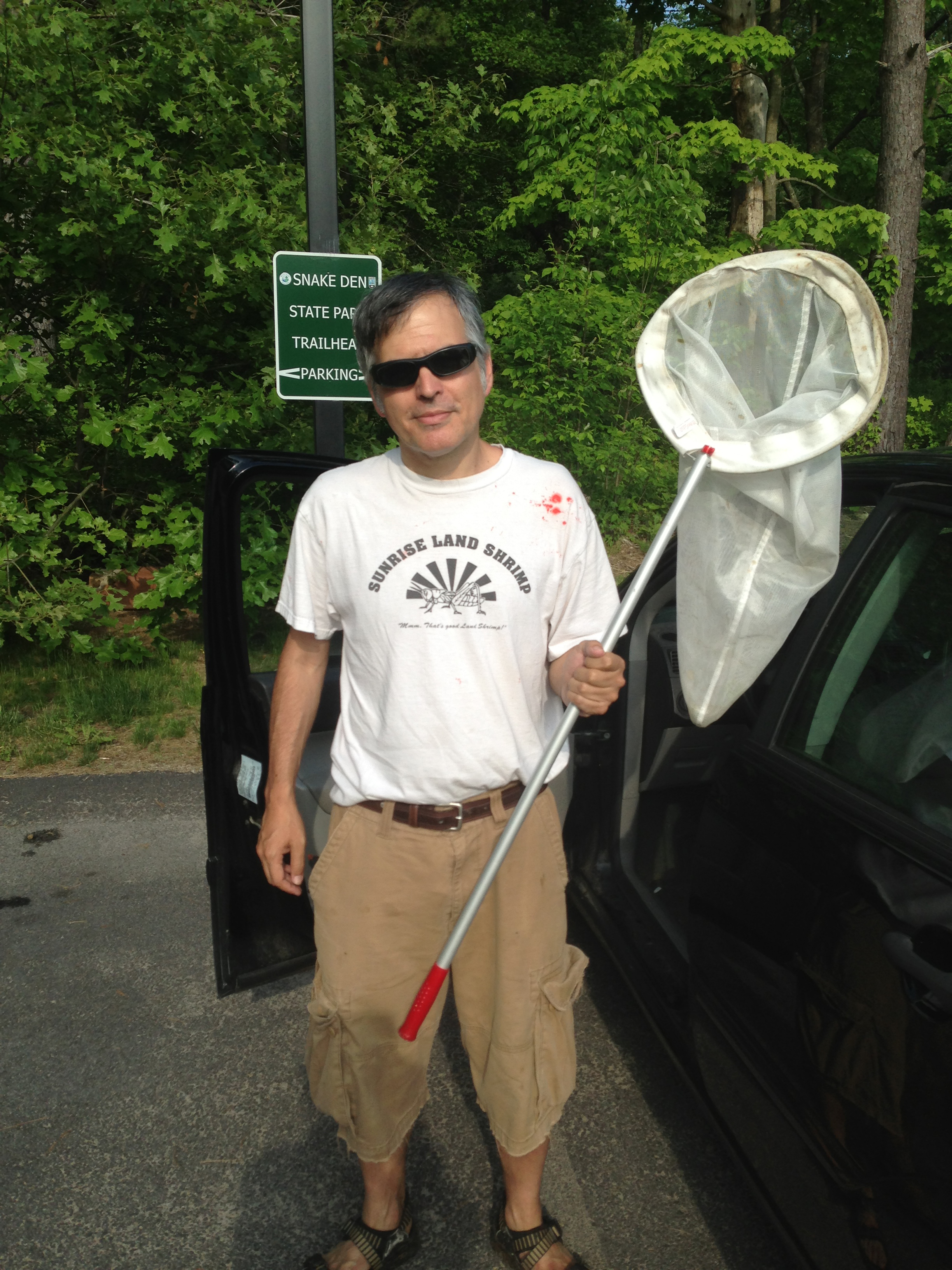 The UN's Food and Agriculture Organization published a report advocating eating insects as a way to reduce food insecurity. Dave Gracer has been running an edible bug business called Small Stock Foods since 2009. Living on Earth's Emmett FitzGerald joined him for a bug hunt in Rhode Island.

CURWOOD: It's Living On Earth. I'm Steve Curwood. The UN's Food and Agriculture Organization recently published a report that recommended insects as a viable solution to food insecurity, even in relatively wealthy countries. Now, the whole idea may turn the stomach of many, but the report was welcome news to the small US community of insect eating advocates, or entomophagists. One of them is Dave Gracer, who's been running an edible bug business called Small Stock Foods since 2009. Living on Earth's intrepid reporter Emmett FitzGerald joined him on a bug hunt in Rhode Island.

FITZGERALD: Dave Gracer has eaten all kinds of bugs.

GRACER: I’ve had about 60 or so species of arthropods, mostly insects, but I’ve had scorpions, a giant centipede, and isopods, which are those rolypolies which are quite good. 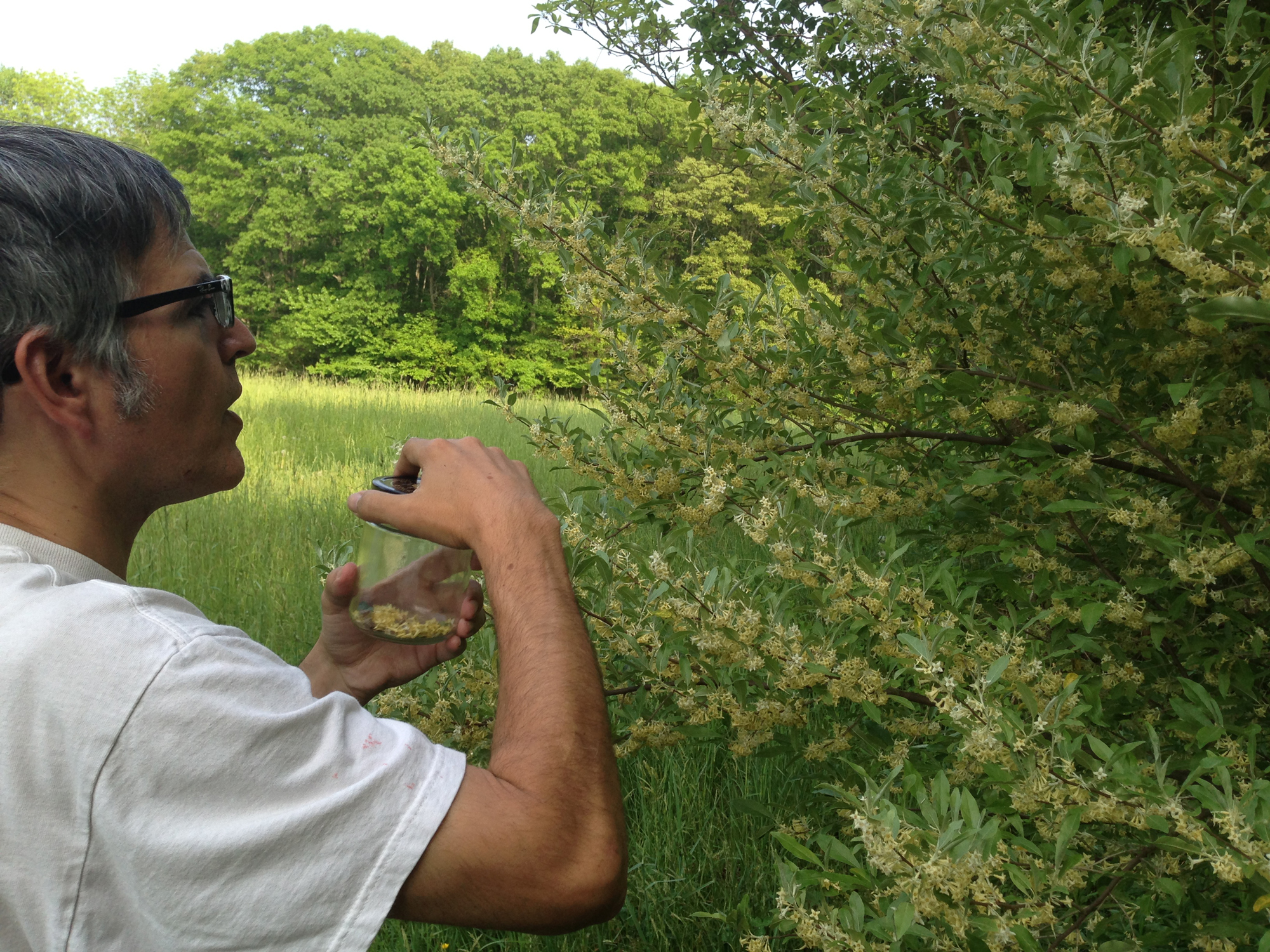 Dave going for a stinkbug in an autumn olive (photo: Emmett FitzGerald)

FITZGERALD: He’s not a gross-out fanatic, or a former Fear Factor winner, just a guy who thinks that eating insects makes a lot of sense.

GRACER: I do not believe that there is a food production paradigm that can produce nearly as much food so efficiently as insects.

FITZGERALD: Gracer is an edible insect advocate, and the owner of a business called Small Stock Foods in Providence, Rhode Island. He collects edible bugs and sells them to brave eaters around the country. Much of Dave’s stock comes from Asian, African, and Central American markets in Providence and Boston. But today, he’s going hunting in the park. 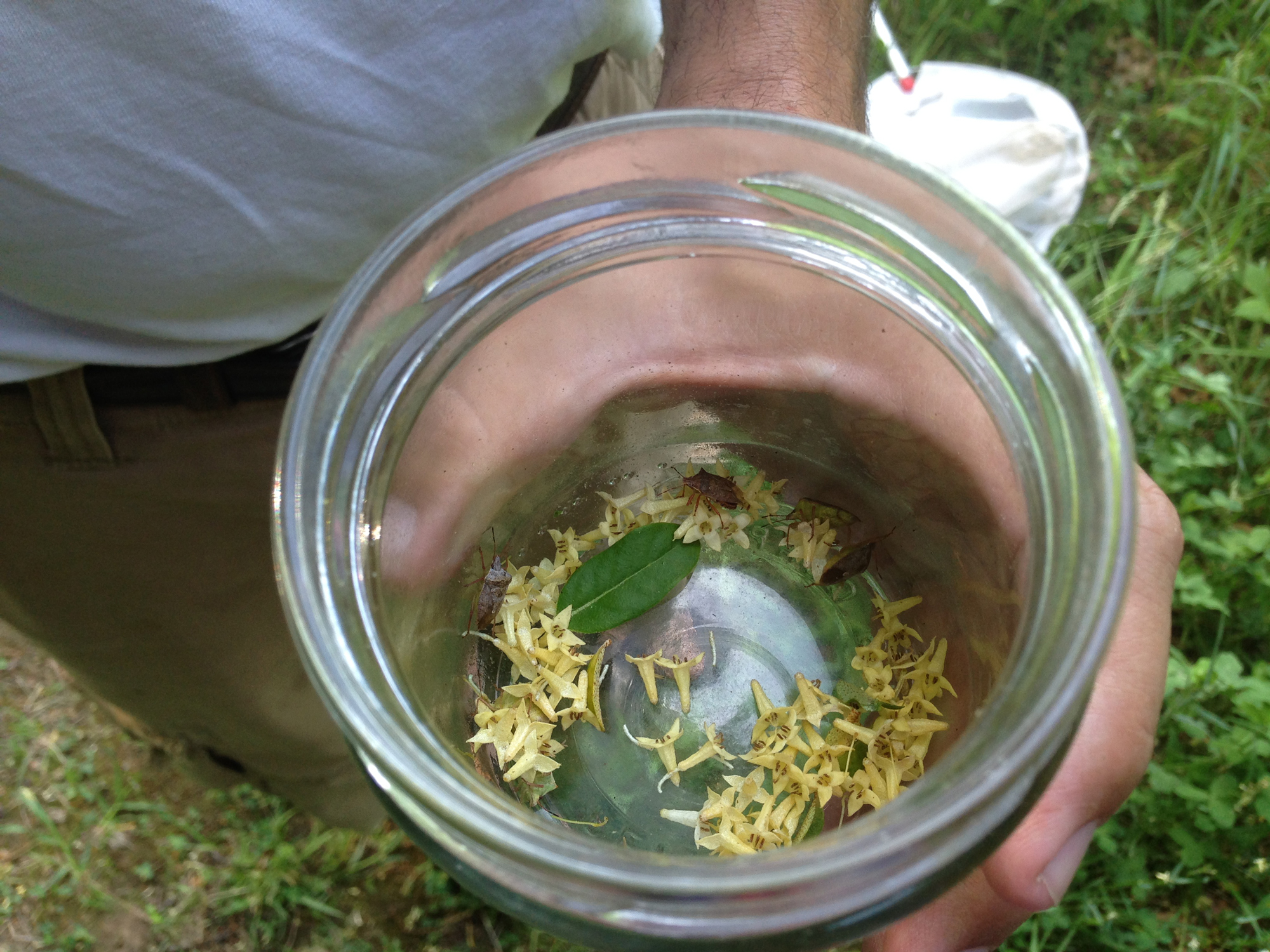 A jar full of stinkbugs and flowers (photo: Emmett FitzGearld)

GRACER: So we are in Johnston, Rhode Island, this is Snake Den State Park. What I get from here are several species of grasshopper, a couple of katydids, dragonflies.

FITZGERALD: Which he catches with a butterfly net and a couple of Mason jars. Dave and I set out into the meadow. As we walk, he tells me he eats insects because he believes that our current food system is unsustainable.

GRACER: From my point of view, the way that humans feed themselves now, basically, represents a big middle finger to the natural world. 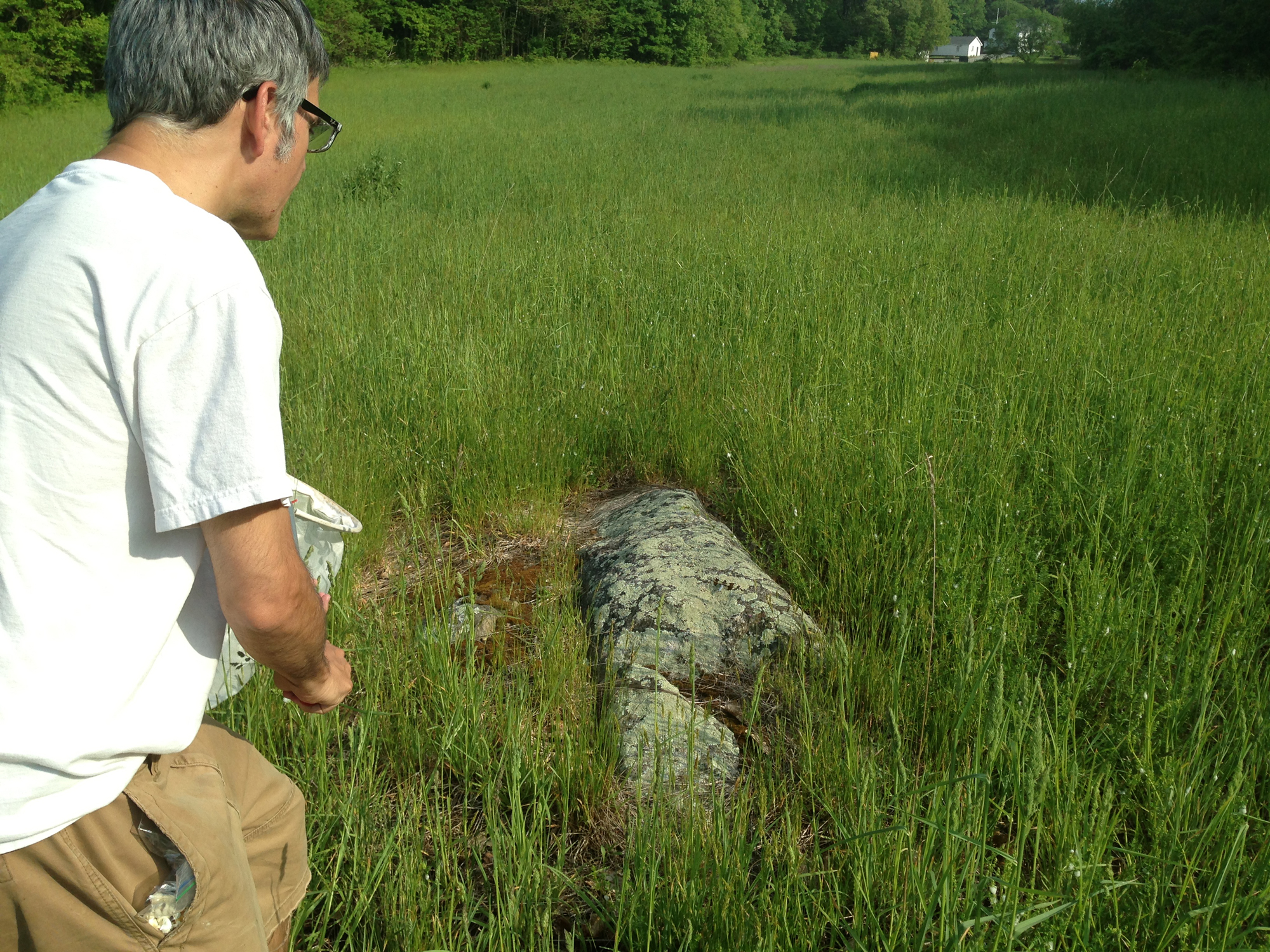 FITZGERALD: As the global population continues to rise, he says, food security will only become more of a problem.

GRACER: Look at the future, look at what’s coming our way, it’s really kind of terrifying, 9 billion plus people by 2050, which is really not that far away, and none of the experts have explained where all that food is going to come from.

FITZGERALD: Dave thinks that at least some of that food should come from large-scale insect farming. Many cultures have long traditions of eating insects, which are high in protein, vitamins, and amino acids. Several countries, including the Netherlands and Thailand, already grow insects on a commercial scale.

GRACER: There’s something like 20,000 cricket farms for human consumption in Thailand.

FITZGERALD: Dave says that if he had the money, he would invest in insect farming here in the States. But for now he’s content to volunteer his time. 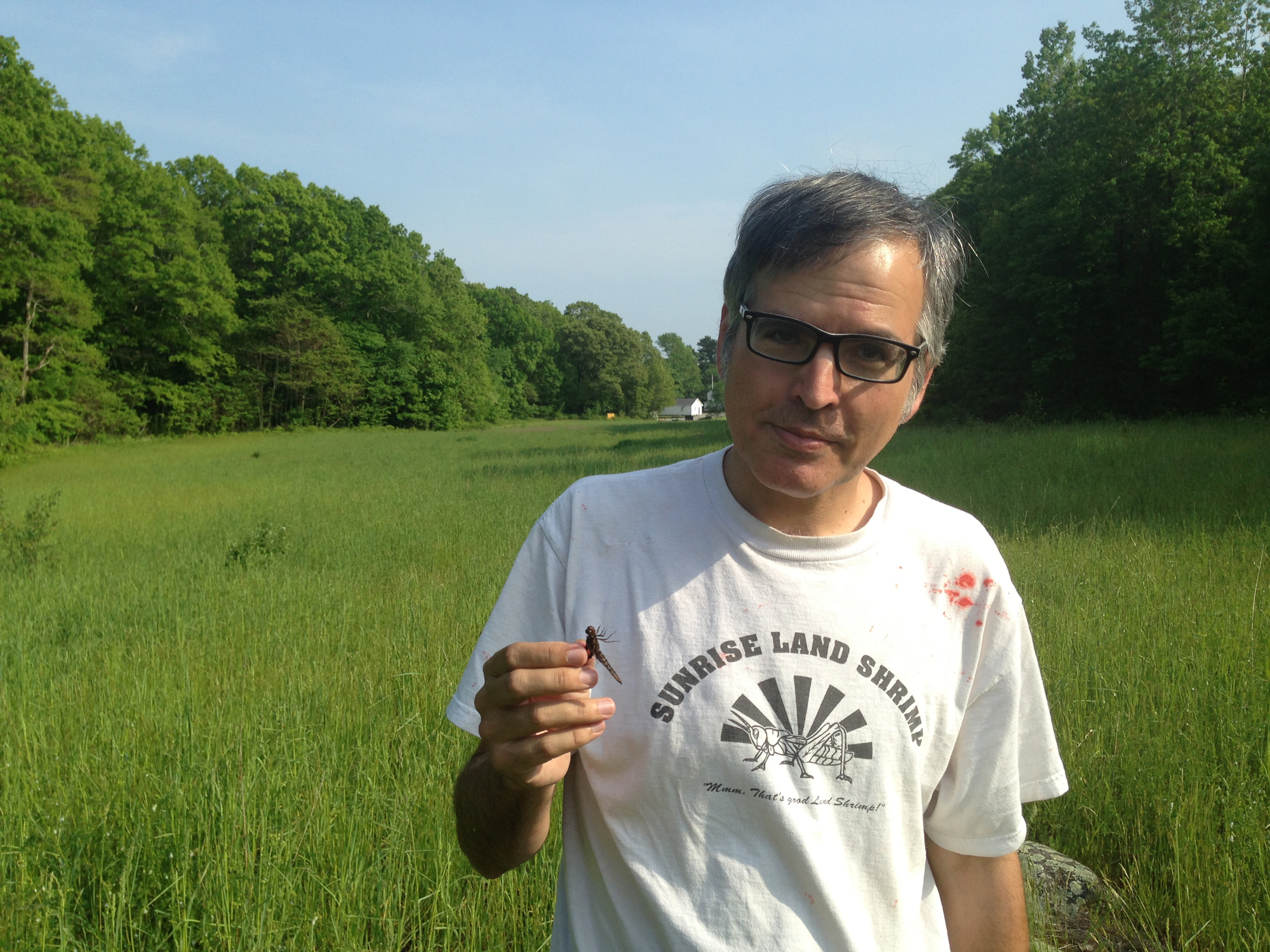 GRACER: I mean, I’m an adjunct at a community college, how wealthy am I? If I could plug 20 million dollars into this I would, but instead all I can do is 20 million hours.

FITZGERALD: We follow a mowed path, skirting the edge of the field. Redwinged blackbirds balance on the tops of milkweed, and bumblebees flit among the blossoms of an autumn olive.

FITZGERALD: We poke our heads into the branches and Dave spots a snack.

FITZGERALD: It’s a stinkbug, Dave says, but don’t be fooled by the name. They smell like soap and taste like cilantro. 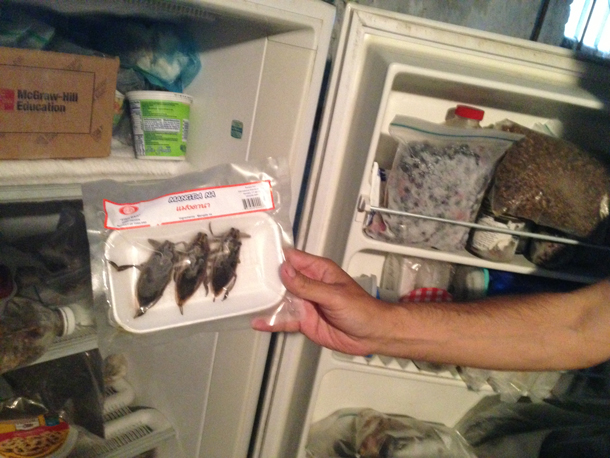 Dave’s freezer is packed with bizarre insects, like these waterbugs from Thailand (photo: Emmett FitzGerald) 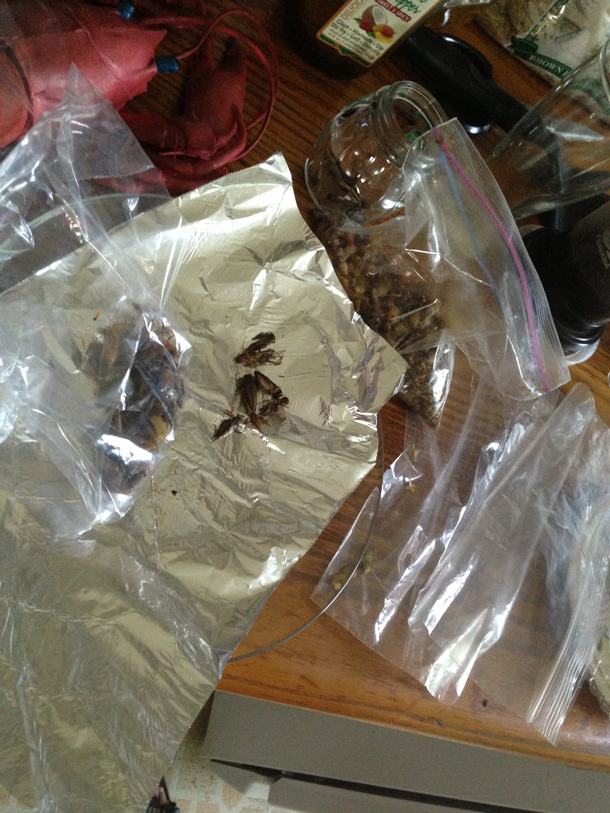 
GRACER: Stinkbugs are eaten in many parts of the world, they’re called humiles in Mexico and in fact there’s a particular city in which they have a stinkbug festival and there’s a day of the stinkbug.

FITZGERALD: Dave pulls out his jar and leans in.

GRACER: What I’m going to do is do the jar below and the lid above.

FITZGERALD: He caps the jar and we walk on. Dave will put the bugs we catch into his freezer where they’ll die within about an hour. They may be small and alien looking, but Dave says he sometimes feels bad about killing insects.

GRACER: They’re animals you know, they would prefer to avoid dismemberment or death just like you and me.

FITZGERALD: But in the end he thinks that killing a few bugs is a more natural way to get food then slaughterhouses or industrial farms.

GRACER: I am reacting to these insects the way any other predator would. It’s an honest exchange of energies like you know what, if I can get you, I will.

FITZGERALD: Dave catches a few more stinkbugs and nabs a grasshopper with his bare hands. As we reach the end of the field, he spots a bright purple dragonfly, perched on a rock.

GRACER: Alright. I’ll go for that.

FITZGERALD: He pulls out his net and begins to stalk his prey.

FITZGERALD: You got him?

FITZGERALD: So you kind of swiped above it

GRACER: I anticipated where he was going to be.

FITZGERALD: Dave slips the dragonfly into a plastic baggie with the rest of our haul. As we walk back to the car, he reflects on a good day of hunting.

GRACER: So this was some good stuff.

GRACER: ...plus two grasshoppers plus one dragonfly.

FITZGERALD: We drive back to Providence and the headquarters of Small Stock Foods, Dave’s house. He takes me down to the basement where he keeps his stores.

[DOOR CLOSES AND STEPS DOWN TO BASEMENT]

FITZGERALD: Dave opens the door to his freezer. It’s filled with plastic bags and milk jugs, each bursting with legs and wings and antennae.

GRACER: Here these are giant waterbugs from Thailand, they’re called mingda. Here I have part of a large order of grasshoppers from Texas. Oh, here’s the scorpions right here.

FITZGERALD: Small Stock Foods is no big business. Dave only fills about ten orders a year. Most of his bugs go to avant-garde restaurants, novelty party planners, and other clients looking for a little shock value.

FITZGERALD: But, Dave says, recently, some people in the United States have begun to think of insects as a serious food for the future.

GRACER: There are companies now working to produce industrial commercial supplies of insects for human consumption in the U.S. and that is as of the last 18 months.

FITZGERALD: Farmed bugs could be eaten as proteinous snacks or ground into flour for baking. Dave thinks that someday insects will be space food.

FITZGERALD: But the future of insect consumption depends on our willingness to eat them. Most people crinkle their nose at the sight of a cockroach, but Dave says the hardest bug to eat is your first. He takes me up to the kitchen and lays out a handful of crickets and katydids on a sheet of tin foil.

FITZGERALD: I squirm a bit in anticipation as he puts them into the toaster oven

FITZGERALD: So this is a house cricket. Alright, here I go.

But the legs get stuck between my teeth and I need some water. A Katydid from Uganda is coming up next.

GRACER: It’s like a cross between a crouton and bacon.

FITZGERALD: Dave says he likes to snack on Katydids with an afternoon beer, but for me, I’m not sure they could ever replace tortilla chips or popcorn. Dave says that’s not the point.

GRACER: I’ve never claimed that insects taste better than other foods. I prefer sushi, and duck, and pastrami, and lasagna, and ice cream and cheese, and so many other things.

FITZGERALD: But in time, he says, people can learn to incorporate insects into their diet. After all, they’re really just land shrimp. In his presentations, Dave asks people: if you’re willing to eat arthropods like shrimp, why not a grasshopper?

GRACER: And I go into the amusing revelations about what crab and shrimp and lobster eat which is trash and feces and dead animals, as opposed to what grasshoppers and caterpillars eat which is salad.

FITZGERALD: Before I go, Dave gives me a small bag of bugs to bring home. On the stoop outside my house, I recruit a few reluctant tasters. They think the Katydids are all right.

MAN: Hmm not bad, tastes like it's cooked in butter or something.

FITZGERALD: But they aren’t so sure about the crickets.

MAN: Ugh, that one’s pretty gross. You can feel the organs and ... ugh!

FITZGERALD: Insects may well be the food of the future, but for most of us, they’ll take some getting used to.