Ritual and Deforestation in India 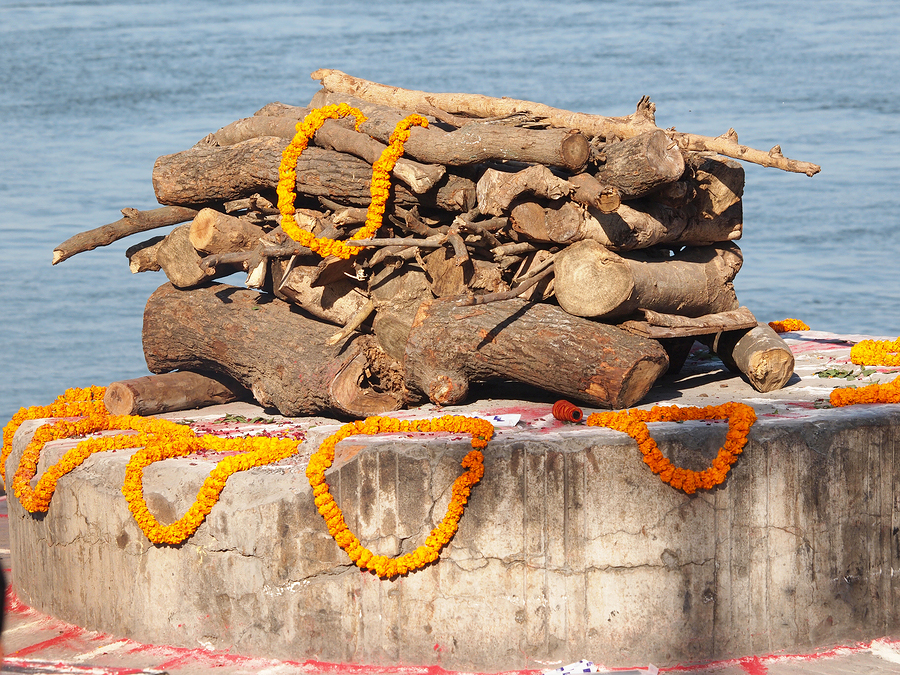 Sandalwood prepared for a cremation. (Bigstockphoto.com)

As much as 750 square miles of forest are cut down annually for cremation ceremonies in India. George Black, executive editor of On Earth Magazine, tells host Steve Curwood that environmentalists and engineers are working on a more efficient but culturally appropriate way to cremate the 8 million Indian Hindus that die each year.

CURWOOD: The Ganges is a holy river, especially for the one billion Hindus who live in India.

But the combination of pollution and cremation rituals have led to an environment that can feel far from hallowed. George Black is Executive Editor of the Natural Resources Defense Council’s magazine, On Earth, and he recently wrote about the Ganges. George, welcome to Living on Earth.

BLACK: Thank you, Steve. Nice to be with you again.

CURWOOD: First all, describe for me the city you visited, Varanasi, and its cultural role in India. It’s probably, of all the sacred places in India, the most sacred and revered. It actually...you know people talk about Jerusalem or Mecca or whatever being the center of the universe? Hindus actually literally believe that this is where the universe was created by the god Vishnu and where he left, supposedly in myth, the imprint of his sandals while he was doing the creation, that is where the cremations happen, right on the banks of the Ganges. It’s the most sacred spot in the whole country. And the idea is if you are cremated there, you actually break the cycle of reincarnation.

CURWOOD: What do you mean...break the cycle of reincarnation?

BLACK: Well, Hindus believe you’re endlessly reincarnated as one form of life or another depending on the nature of your deeds while you were alive, and you can be anything from an elephant to a cockroach, depending on your [LAUGHS] stored up good deeds. But the idea is in Varanasi, which they call the city of light, which they believe is suspended above the earth, and above time and space, if you die there and your ashes are scattered on the holy river, the Ganges, then you will actually, once and for all, go to heaven, and join your ancestors, and be released from the pains of reincarnation and rebirth. And people literally come to Varanasi to die. The ultimate virtue is you actually physically die there, and are cremated there, and are put in the Ganges there.

CURWOOD: The irony, of course here, George, is that the Ganges River is one of the most polluted waterways in the world. How polluted is it, and how did it get that way?

BLACK: Well, in terms of bacteriological contamination, it is literally thousands of times worse in coliform bacteria than World Health Organization standards, but it’s not just that. The Ganges rises in the Himalyas, many hundreds of miles upstream, and it’s affected by a huge number of factors along the way. One is that climate change is changing the flow of the river, variable monsoons; the river levels can drop very low so the pollution is more concentrated; there’s dams; there are a string major cities that dump their raw sewage; their tannery effluent...the big industry in India is tanneries; their chemical works discharge directly; they don’t have effluent treatment plants. So by the time you get to Varanasi and you add that city’s quotient of the effluent, you’re really dealing with something that smells bad, it looks bad, you have dead animals floating in it. I mean, it’s really a problem with all of India’s major rivers.

CURWOOD: And this one is really an open sewer, you’ve described.

BLACK: Yes. Basically I think that’s accurate, quite literally, the sewage runs into the Ganges, at one spot literally 50 yards above, upstream from the reincarnation ground. But if you’re a Hindu, you have a different conception of pollution that is not irreconcilable, which is a notion of purity. The river is a goddess, the goddess Ganga, and by immersion in it, there are thousands upon thousands of pilgrims there all the time who take what they call their holy dip in the river. They regard that as a purifying thing. They may get sick afterwards,;a lot of them do. But there are just two conceptions of purity.

CURWOOD: So let’s do the math here that you have in your story. You say there are some 10 million people a year who die in India, the bulk of whom are cremated with wood fires. So at the end of the day, how much wood are we talking about here?

BLACK: Well, it’s been calculated to about 750 square miles of forest every year. Depending on the economic status of the dead person’s family, depending on the level of piety, you can be talking about anything up to 1,000 pounds of wood, which is a huge pile of wood. All the streets around the cremation grounds of Varanasi are stacked 20, 30 feet high with wood. And what people who are concerned about the environmental costs of this, and are trying to challenge the really fundamental tenets of a great religion, what they come up against, is how do you reduce the amount of wood without going to a western style closed cremation system, which has been largely rejected in India because you can’t observe the funerary rights - which are very elaborate. 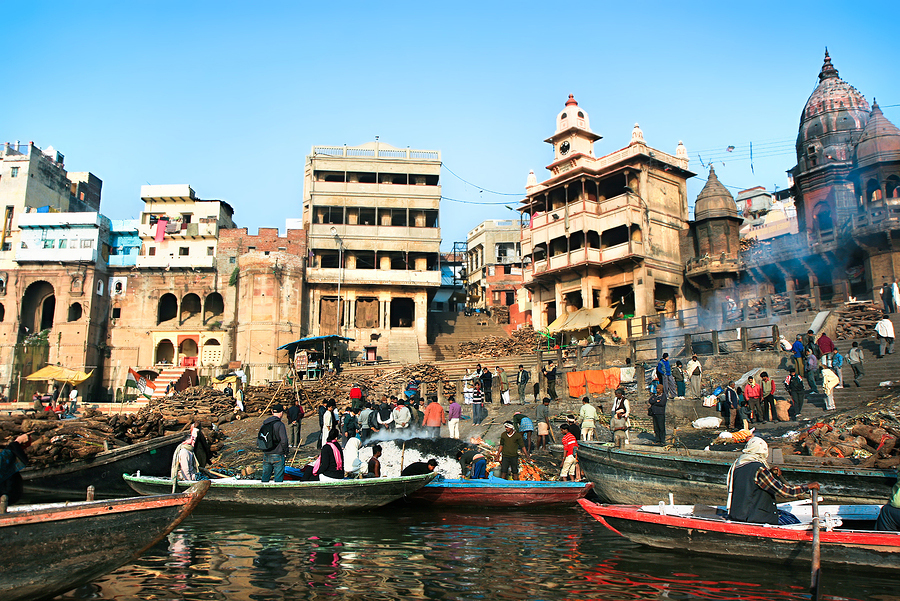 Varanasi, India is the holiest site in India to be cremated for Hindus. (Bigstockphoto.com)

The mourners have to walk around the corpse. The fire supposedly has to be lit in the mouth of the corpse. There are some rituals that, shall we say, are disconcerting to a Western visitor, including breaking open the skull during the act of cremation so the soul can be released. And you can’t do any of that if you’re feeding somebody into a gas oven in an electric-powered crematorium. So this is the dilemna, how could you have an open pyre, and at the same time, allow people to conduct these rituals? And there is a group in New Delhi, that I visited and witnessed their cremation system, who have come up with a design that works pretty well. It’s metal, it’s kind of perforated - although it’s too technical to describe - but you can get away with burning 200, 300 pounds of wood instead of burning 600, 800 pounds. 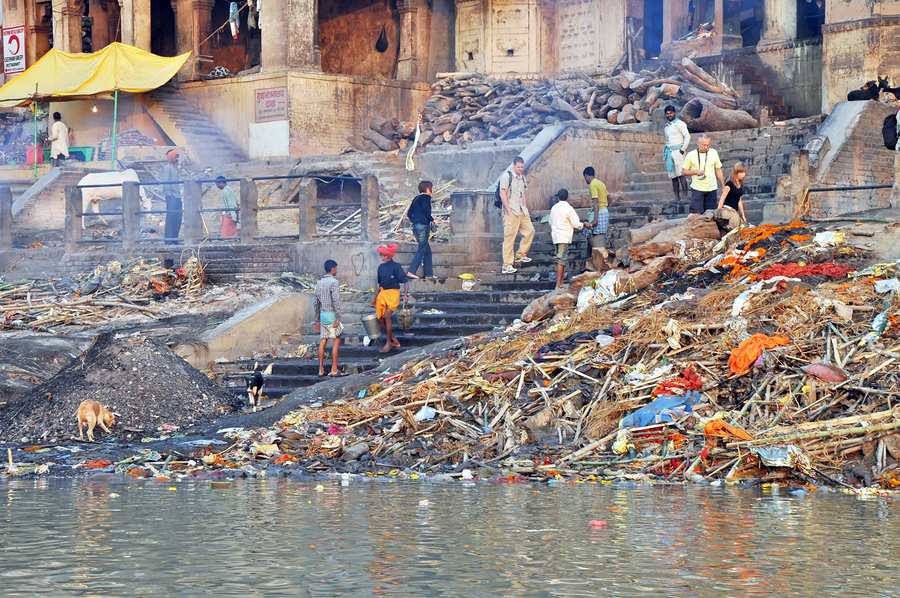 Varanasi on the Ganges River (Bigstockphoto.com)

CURWOOD: So, I understand there are a lot of cultural and economic interests that keep the demand for cremation wood high. Can you tell me about that?

BLACK: Yes, it’s basically a big business as well as a religious business, and like a lot of things in India, there are middlemen who take cuts and commissions and bribes along the chain. And that goes all the way from the illegal woodcutting in the forests -- where I asked somebody...I saw these people in the forest with axes and I said to somebody, ‘Well doesn’t the forest department send out guards to monitor this?’ And he said, ‘Oh yes, they go out every day.’ And I said, ‘Well, what’s the problem?’ And he said, ‘No, you don’t understand. They go out every day to take bribes so they will look the other way and ignore the illegal logging.’ So you go from that through the auction depots where the wood is sold, the trucking companies, the brokers, and you finally end up at the cremation grounds, where even the priests can have a stake in it.

CURWOOD: And so they’ll push you to buy more wood?

BLACK: Oh yes. And they’ll also say, ‘you know you want to be a good Hindu...remember what your ancestors did...remember how much wood they burned and they were guaranteed their place in heaven and you don’t want to take any chances’. And they could be also taking a cut themselves. I went to one cremation ground in New Delhi where the priest was actually selling the wood. So obviously you’ve got an incentive to sell more. 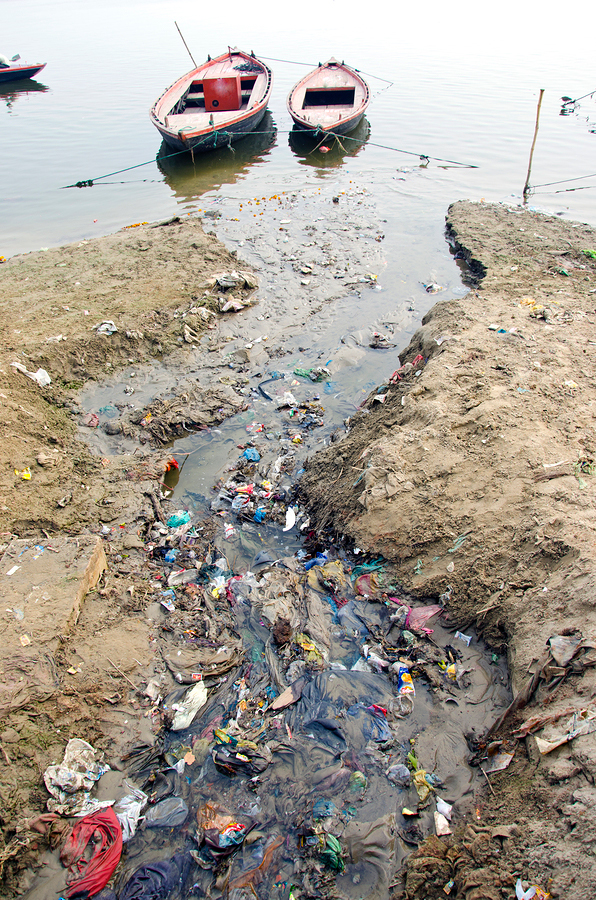 Portions of the Ganges River are considered to be open sewers. (Bigstockphoto.com)

CURWOOD: So how likely is it that the new technology that you described to allow traditional open air cremation but cutting the amount of wood, how likely is that to catch on?

BLACK: Well, I went to Varanasi to test that proposition because it’s almost the most extreme challenge they’ll face. I think in other places, you can begin to see it taking off in cities like New Delhi, Bangalore, Calcutta, Mumbai, where you have a sizeable, more westernized middle class that’s less attached to ritual. But I think when you come to grips with the majority India, you realize that transforming things like environmental practice, you’re really talking about a matter of centuries, possibly even a millenium. It’s going to be slower in Varanasi than anywhere else.

CURWOOD: George Black is Executive Editor of OnEarth magazine for the Natural Resources Defense Council. Thanks so much, George, for taking the time.

BLACK: Thank you, Steve, for having me.