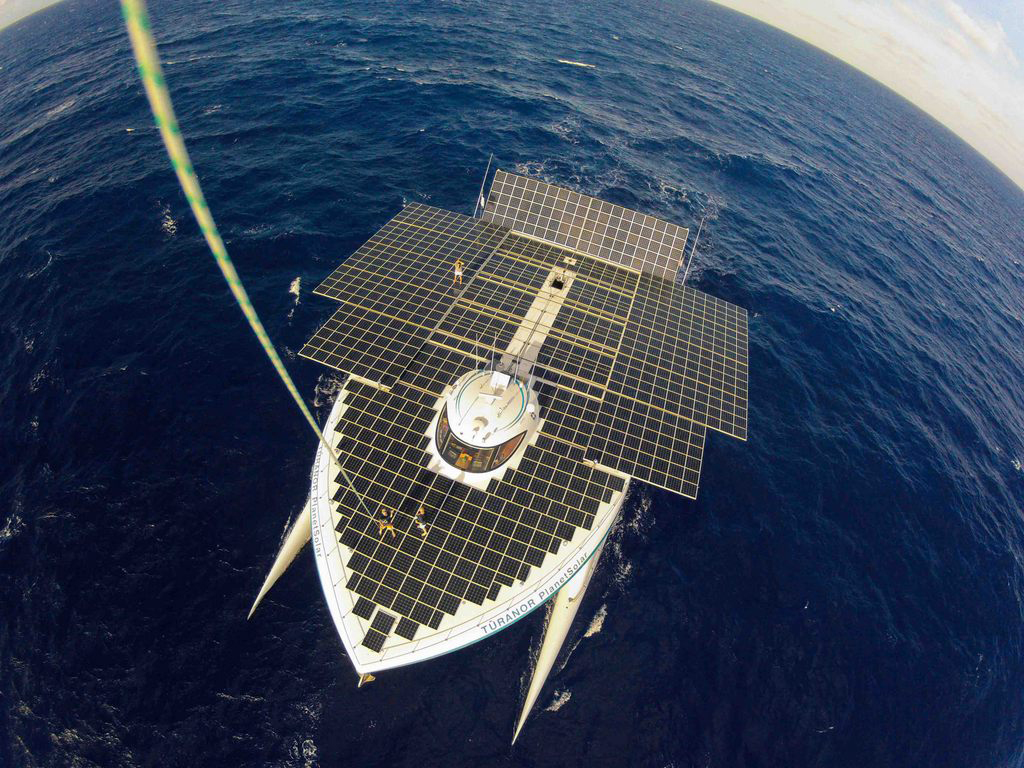 An aerial shot from at sea shows the all of the ship’s solar panels extended and absorbing energy to power the voyage. (Türanor Planet Solar)

The world’s largest solar powered boat made history by circumnavigating the globe. Living on Earth’s Bobby Bascomb reports that the ship’s now busy in the Atlantic serving as an emissions free platform for scientists to collect data about the Gulf Stream.

CURWOOD: It’s Living on Earth. I’m Steve Curwood. When the price of oil shot up a few years back, the large freighters that ply the oceans found they could save a lot of polluting bunker oil if they slowed down, when there was no hurry to deliver their cargo. So what if slow boats used no fossil fuels at all? One example is currently traveling up the US Atlantic coast - the world’s largest solar powered boat. The experimental ship made history by circumnavigating the globe using only sunpower - though it took a year and a half to make the trip. Now the ship, the Türanor Planet Solar, is not a freighter. It’s more of a science research vessel, and now it’s collecting data on the Gulf Stream in the Atlantic Ocean. The Türanor Planet Solar recently put in to Boston Harbor and Living on Earth’s Bobby Bascomb went aboard.

[WALKING UP STAIRS ONTO THE BOAT]

BROS DE PUECHREDON: Hi Bobby, I’m Rachel. Welcome on board. How are you today?

Rachel Bros De Puechredon is head of communications for Planet Solar. It’s an exceptionally hot sunny day in Boston Harbor; perfect conditions for showing off the world’s largest solar powered boat. It’s 101 feet long and 49 feet wide. The top deck of the white catamaran is covered with black solar panels. Inside though it looks just like a modern, functional ship.

BROS DE PUECHREDON: We are standing right now in what we call the living room. That’s where everything happens that is social…lunch, events, press conference and all that.

BASCOMB: The MS Türanor Planet Solar, gets part of its name from the Tolkein’s saga Lord of the Rings. Türanor means ‘the power of the sun’. This sun powered ship was designed by an engineer from New Zealand, built in Germany and is now home to five crew and four scientists from Europe.

BROS DE PUECHREDON: And here you go to the very tiny little kitchen. We don’t realize but from Miami to New York it’s 160 meals so our cook has a lot of work to do in here. And the only thing not powered by the sun is the oven. It’s gas. But everything else on this boat is powered by the sun. So what ever you plug on it - hair dryer or computer - it becomes solar.

BROS DE PUECHREDON: So, we want to go now to the top of the boat. Be careful, it’s a stair.

[WALKING UP THE STAIRS]

BASCOMB: Rachel leads the way up the stairs to the top of the boat. The entire deck is covered in solar panels, 38,000 solar cells in all. When it’s at sea extra panels slide out on each side like wings to a total surface area of more than 5,500 square feet. 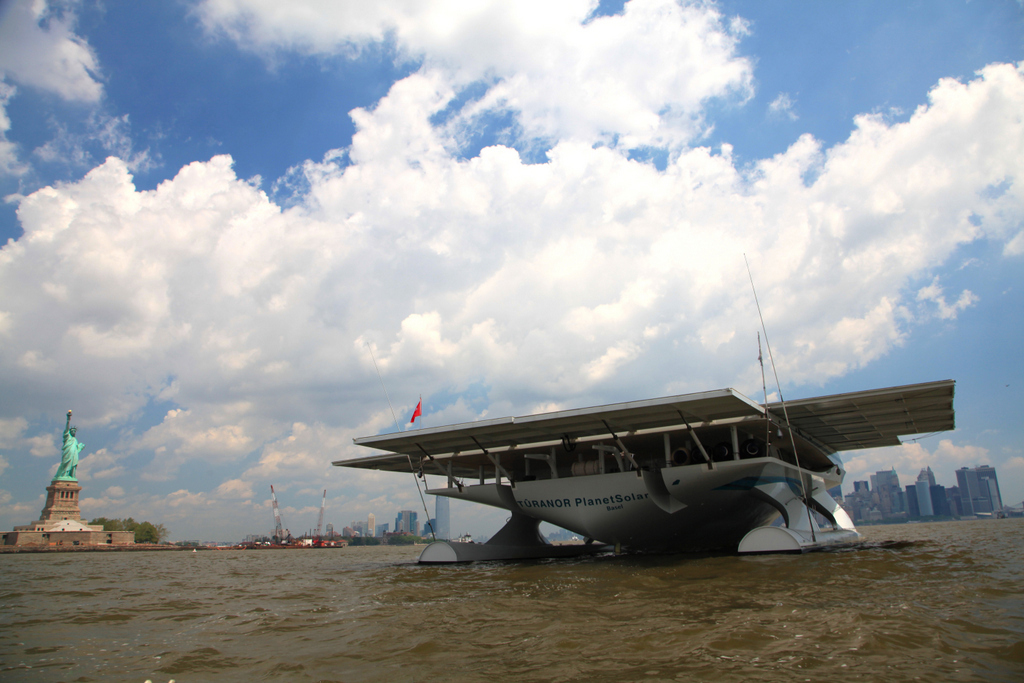 BROS DE PUECHREDON: Usually you have two tennis courts of solar cells that you don’t see -even though it’s huge now.

BROS DE PUECHREDON: It is a space ship, but it’s a space ship with an average speed of five knots. You have the impression it’s going to take off like a plane but it’s like oooh…very smooth and slow and super silent. That’s the great thing when you are on board you don’t realize that the engines are running.

BASCOMB: And the engines keep running around the clock.

BROS DE PUECHREDON: So, during the day we charge the lithium batteries that are on board so we can navigate through the night as well. Actually we can even navigate 72 hours in bad weather if there is no sun.

BASCOMB: So, if there’s no sun you’re still good for three days.

BASCOMB: 10 tons of lithium batteries act as ballast to keep the ship stable, half in each of the two pontoons. They can store a megawatt of energy, enough to power a small house for three months.

BROS DE PUECHREDON: A small house, I don’t know, maybe not a US house. [LAUGHS] 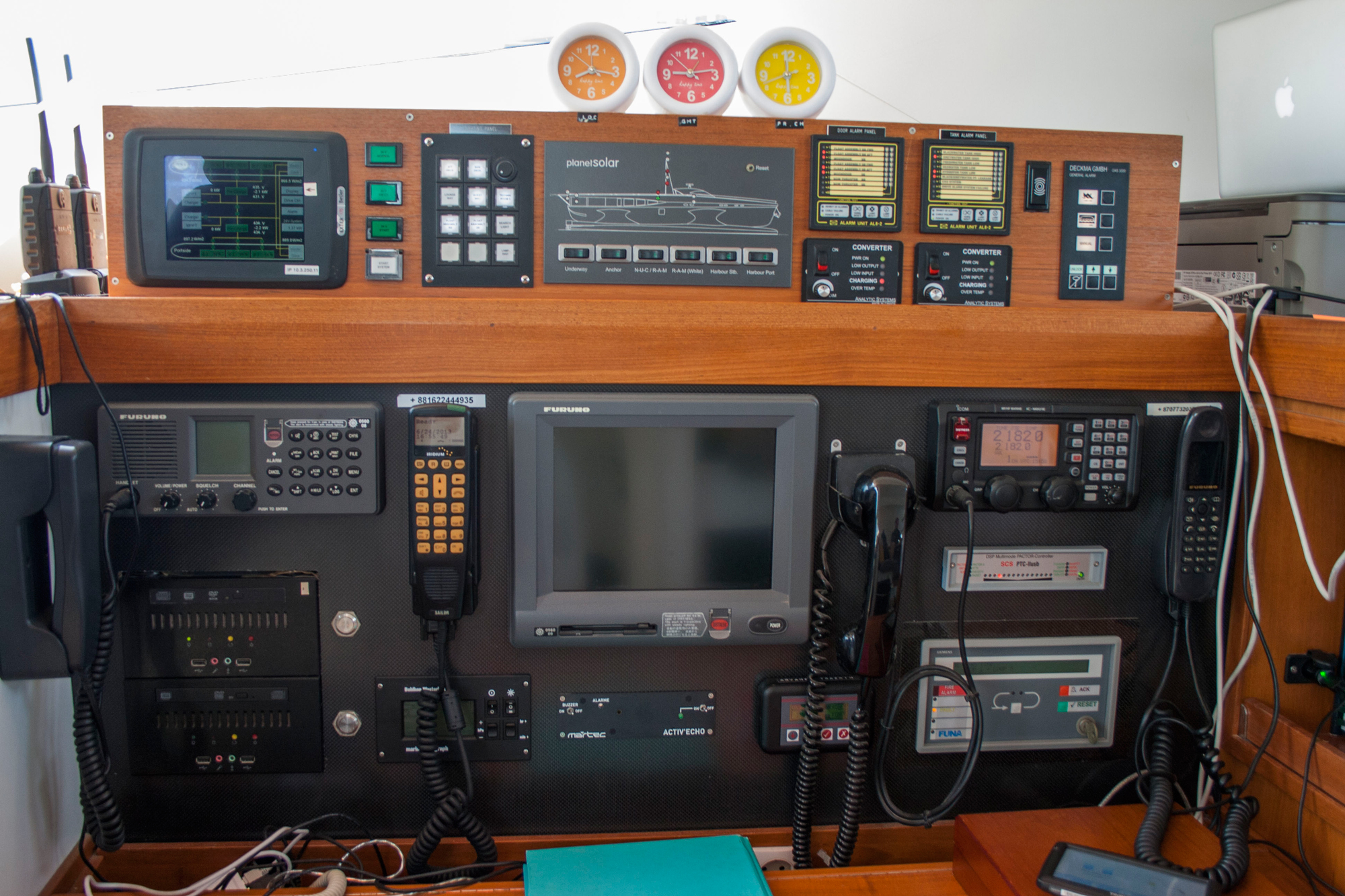 The cockpit of the ship. (Poncie Rutsch)

BASCOMB: The cockpit is recessed into the deck and shielded with tinted glass. Navigation instruments and electronic screens surround the captain’s seat.

DABOVILLE: My name is D’Aboville my first name is Gerard. As you can hear I am from France and I am the captain of this strange vessel. 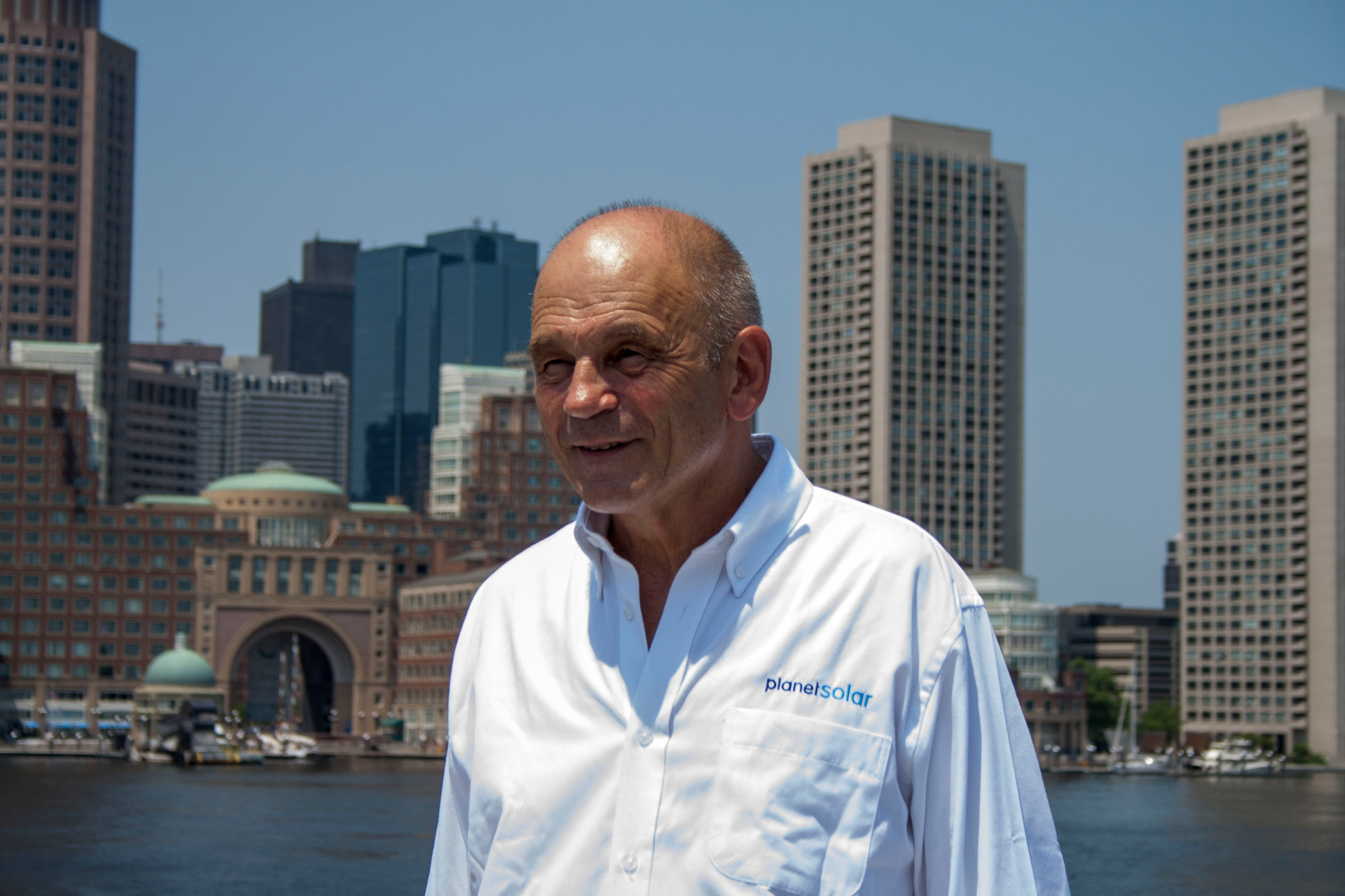 Gerard D’ Aboville, captain of the Türanor Planet Solar, stands on the deck of the ship with the Boston skyline behind him. (Poncie Rutsch)

BASCOMB: Gerard D’Aboville was the first person to row solo across the Atlantic and Pacific oceans. He says the world’s largest solar powered boat attracts a lot of attention where ever it goes.

D’ ABOVILLE: I’ll tell you a story. We had to stop in Morocco outside of the port because the tide was not good so we had to stay for a few hours and we were in the distance from the shore and it was a bit misty so people could see something but not really what it was. And several called the police and said there was an airplane which has landed onto the water! What should we do? [LAUGHS] 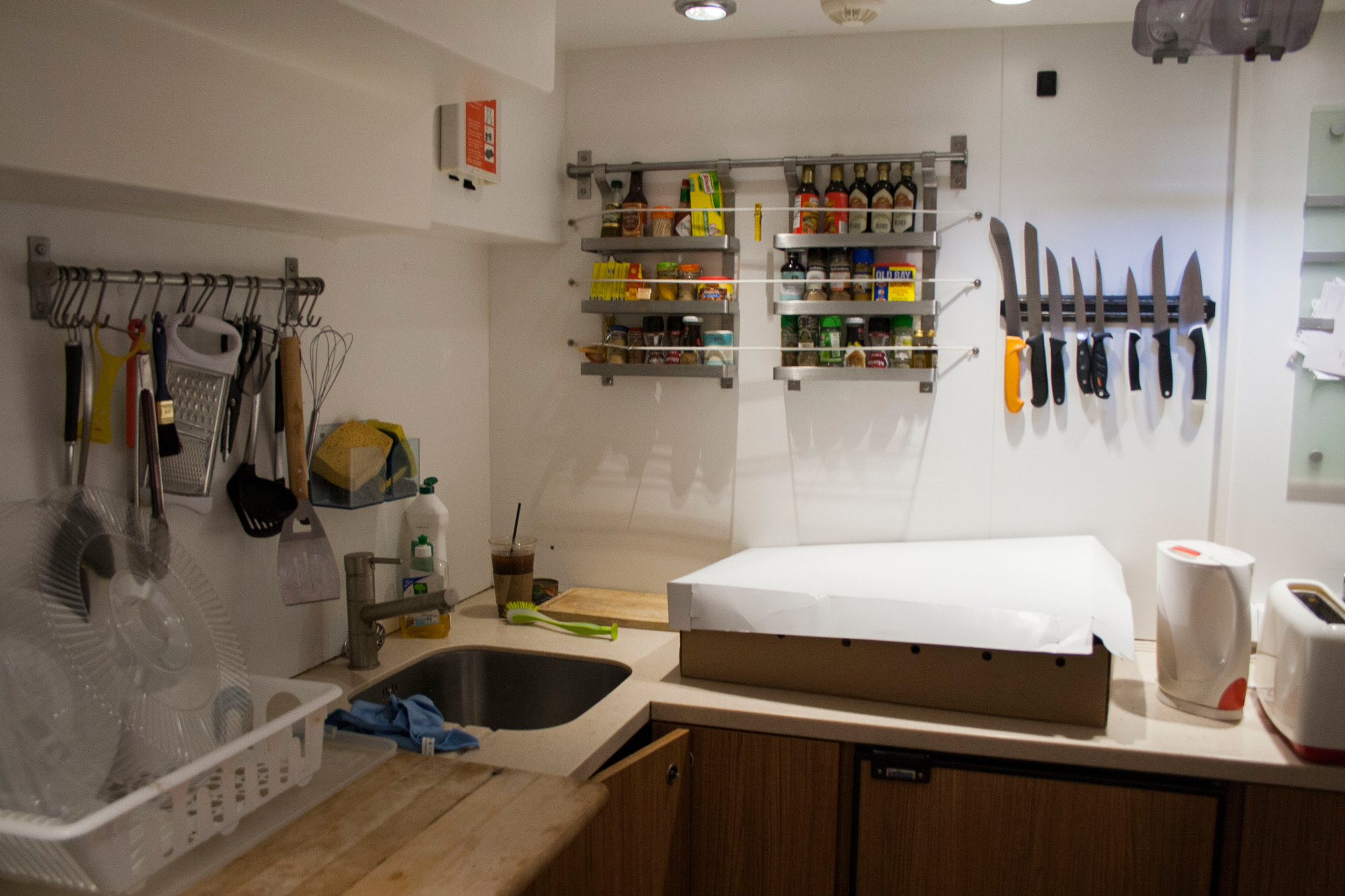 The ships galley is home to the only non-solar powered item on the boat, a gas powered oven. (Poncie Rutsch)

BASCOMB: It is sort of a space age looking thing, it’s all covered in these black panels.

D’ ABOVILLE: It is probably very strange looking. One day in the Mediterranean we passed a ship and the chap called us on the radio it was a Filipino guy and he said, ‘Sir, may I ask you a question?’ and I say, ‘Yes of course’. ‘What is it? Is it a spaceship?’ [LAUGHS]

BASCOMB: Captain D’Aboville calls the ship an ambassador for solar energy. It’s also uniquely qualified for research, which is the main purpose of this summer long voyage. Scientists from the University of Geneva in Switzerland are on board to study the Gulf Stream. Because the ship has no emissions scientists can collect data completely untainted by exhaust. Martin Beniston is head of the Institute of Environmental Sciences at the University of Geneva. 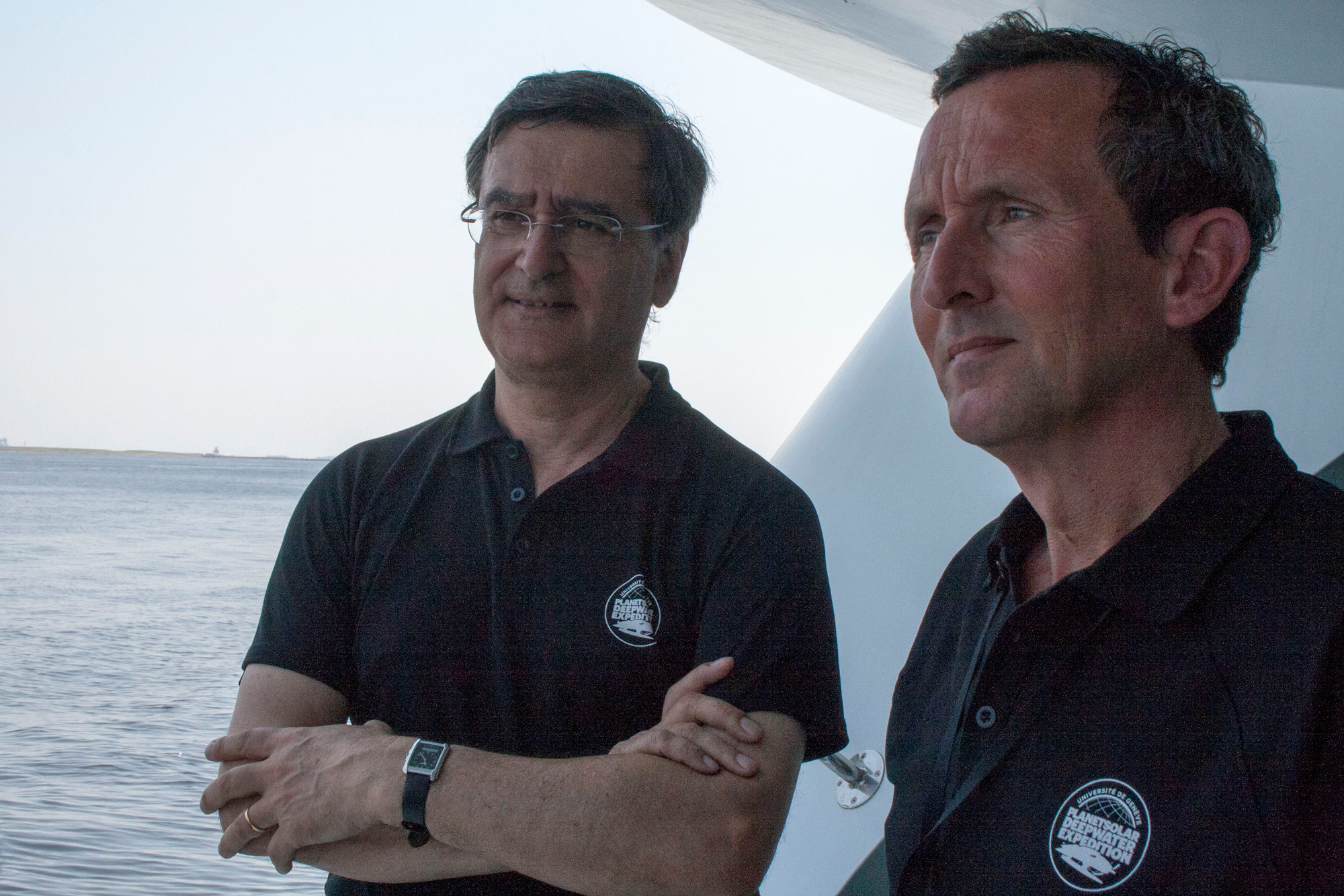 Martin Beniston (left) and Bastiaan Ibelings (right) are researchers from the Universtity of Geneva spending the summer on board the Türanor Planet Solar. (Poncie Rutsch)

BENISTON: The overall goal of this expedition using this Planet Solar solar boat is to look at some of the more subtle interactions between the atmosphere and the ocean as we move out into the Gulf Stream and into the colder waters of Newfoundland.

BASCOMB: Beniston describes the Gulf Stream as a huge river of heat that moves north from the Caribbean. He says Europeans are particularly interested in the Gulf Stream because it has a dramatic effect on air temperatures in Europe. The UK for instance, in roughly on the same latitude as northern Canada, but has a mild winter similar to Maryland.

BENISTON: The reason why it’s more temperate in western Europe than here in New England especially in winter is simply because you’ve got this heat from the ocean. The winds that blows off the ocean will transfer this heat to the continent, so keeping the temperatures 20 or 30 degrees milder. 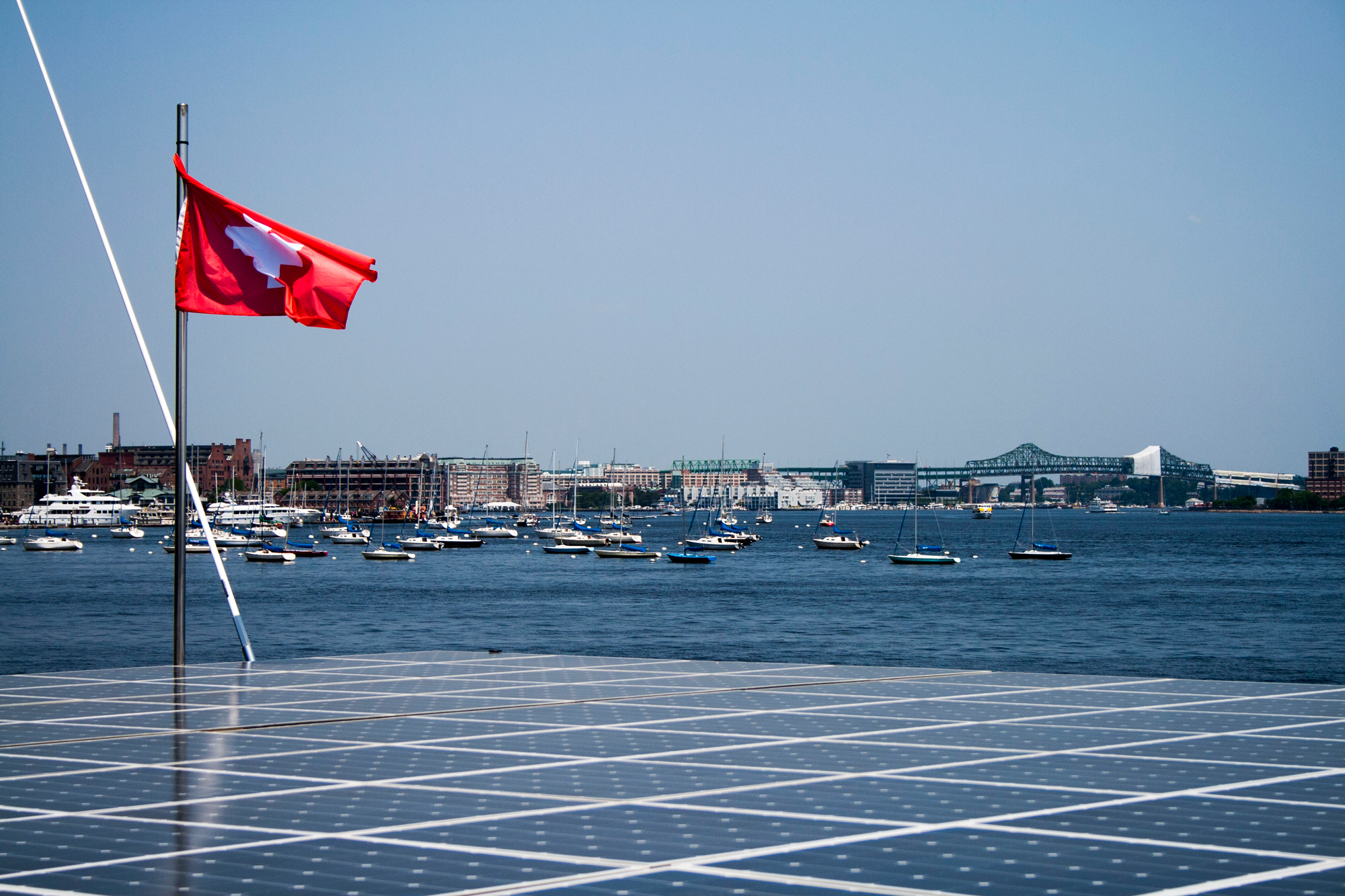 The Swiss flag flies over the solar deck of the ship in Boston Harbor. (Poncie Rutsch)

BASCOMB: But scientists are concerned that melting arctic ice due to climate change could alter the path of the Gulf Stream.

BENISTON: If the Gulf Stream were to change its behavior because of climate change the Gulf Stream could actually slow down to such an extent that cold conditions could come to both sides of the Atlantic in a way. We don’t believe that’s actually going to happen in this century though it is physically plausible.

BASCOMB: Researchers are also collecting data on phytoplankton, the tiny micro organisms that form the base of the food chain and are a critical component for sequestering carbon.

IBELINGS: Phytoplankton in the ocean fix about half of all the carbon on the planet so they buffer climate change.

BASCOMB: Bastiaan Ibelings is a professor of microbial ecology at the University of Geneva.

IBELINGS: Phytoplankton face a challenge in the ocean because they need light for energy and the light is only available in the upper part of the ocean so you need to be close to the surface but phytoplankton also needs nutrients like phosphorus and nitrogen and they tend to come from deep down in the ocean in a process known as upwelling. So it’s the mixing, the physical mixing of the ocean that combines the resources that phytoplankton need to grow.

BASCOMB: As the ocean warms at the surface it inhibits the upwelling. 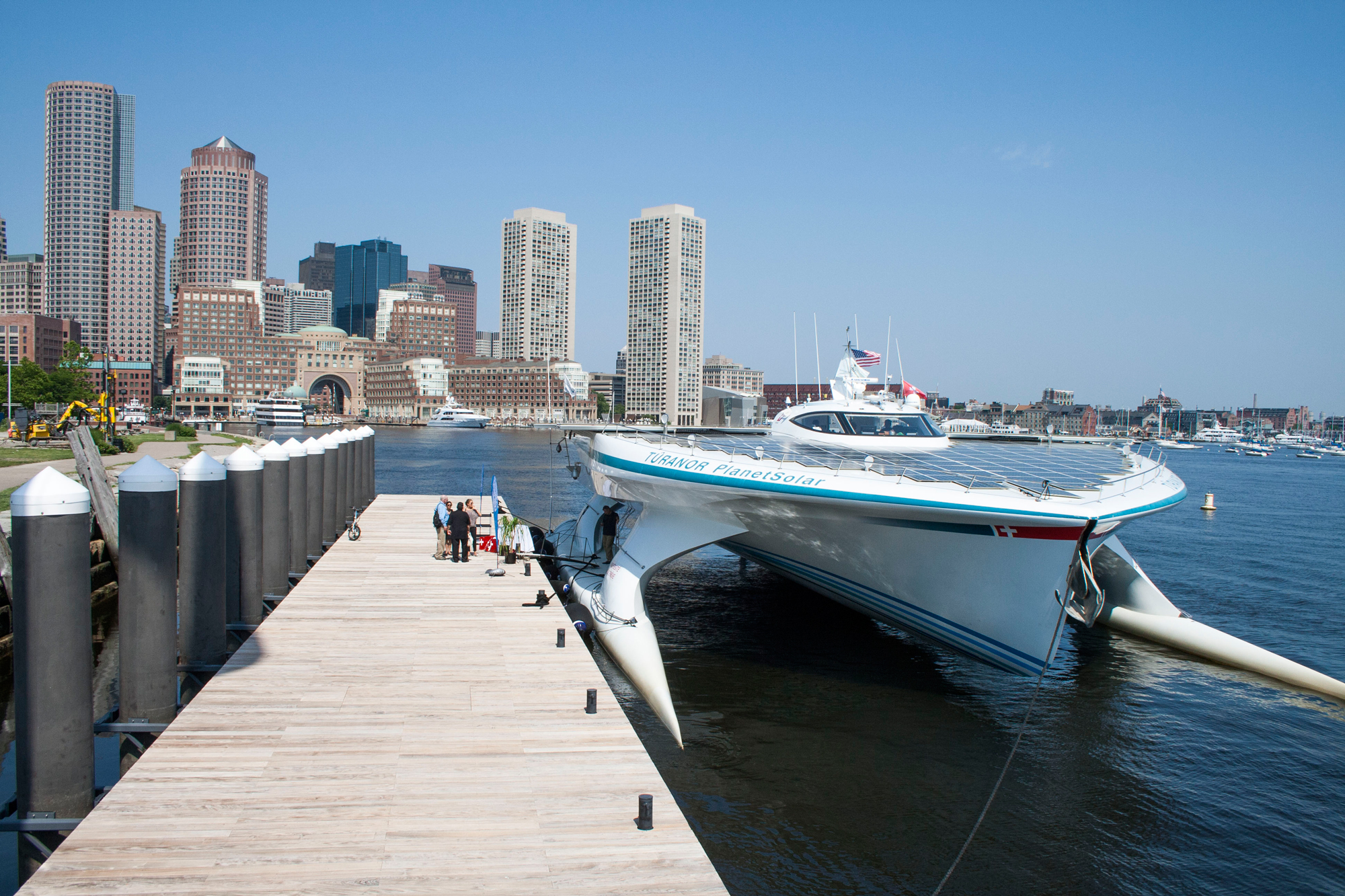 BASCOMB: The scientific team on the Türanor Planet Solar is researching all these questions the voyage continues up the east coast to Canada and then Iceland. They’ll finally head back to Europe at the end of the summer. For Living on Earth, I’m Bobby Bascomb, soaking up the sun in Boston Harbor.