Climate Change and Land Slides in the Northwest 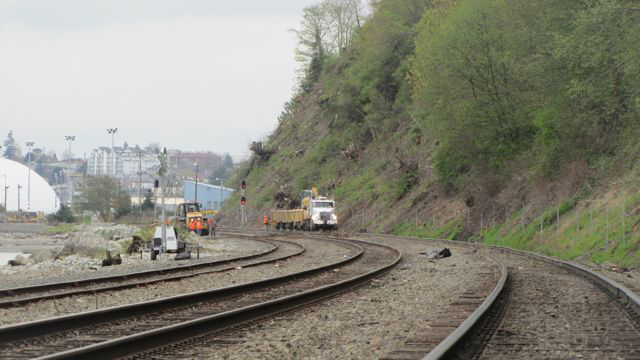 BNSF Railway has had 200 landslides on or near its tracks this season, making it one of the worst since the company began keeping records in 1914. (Ashley Ahearn)

Climate change experts predict an increase in precipitation in the Northwest, which could mean more landslides in the future. EarthFix’s Ashley Ahearn reports.

CURWOOD: It's Living On Earth, I'm Steve Curwood. Much of the Pacific Northwest was once a large temperate rainforest, and there is still plenty of rain around, as Seattle area residents know all too well. And as the planet becomes warmer, there's expected to be even more intense rain.

One consequence may well be more mudslides. A spectacular slide recently took out a home and threatened dozens of others on an exclusive island in Puget Sound. But less dramatic and far more regular slides are now plaguing passenger and freight rail service.

Over the past winter BNSF, the Burlington Northern Santa Fe Railway has had 200 landslides on or near its tracks making it one of the worst seasons since the company began keeping records in 1914. Ashley Ahearn of the public media collaborative EarthFix has our story.

AHEARN: One of the busiest stretches of railway in Washington State runs along the shores of Puget Sound between Seattle and Everett. It’s also one of the most high-risk corridors for landslides. Every day about 40 trains full of freight or passengers travel these tracks, en route from Seattle and points south toward Canada. But for the moment, anyway, you won’t hear any approaching trains, just some sea lions bantering offshore and some men in orange vests operating heavy machinery a little ways down the track.

MELONAS: We're out here as you can see. We have a ditcher, front-end loader-dozer right now removing the debris.

AHEARN: Gus Melonas is spokesman for BNSF Railway. Behind where he's standing, a massive truck overflowing with exposed tree roots and mounds of earth rolls past, clearing the tracks after a recent landslide. Melonas says this has been a bad year for slides.

MELONAS: This would rate right at the top – definitely top five as far as slide after slide – some feel top three.

AHEARN: That’s top three worst years for landslides in BNSF’s recorded history. The company has been keeping a tally since 1914. Landslides are caused by a lot of different things: increases in housing development on bluffs, changes in vegetation. But ultimately...

GODT: ...what causes a landslide is ultimately gravity.

AHEARN: That's Jonathan Godt. He's a scientist with the US Geological Survey and has studied landslides in Western Washington.

GODT: So you’ve got a steep slope and gravity wants to pull everything down and then when water infiltrates into the soil it changes the stress of the soil. 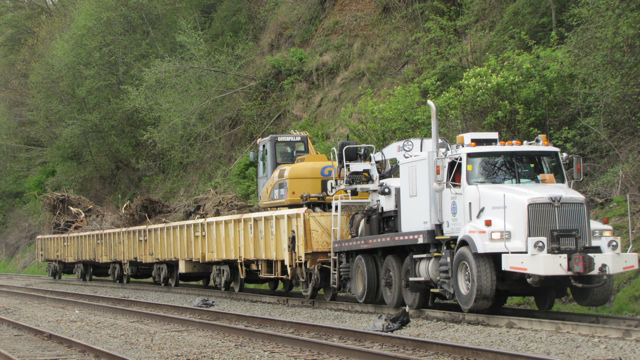 Trucks clear away debris after a recent landslide shut down rail traffic near Everett. (Ashley Ahearn)

AHEARN: That’s right, water stresses out soil. It pushes the particles apart, weakening the composition of say, a bluff overlooking Puget Sound, and making the soil heavier with moisture. Climate change experts predict that in the Northwest we could see more precipitation overall, with heavier downpours and storm events. In Washington, the average annual precipitation has increased by about a third of an inch each decade since the beginning of the 20th century. And this winter saw above average rainfall in the north Puget Sound. That’s where BNSF says 95 percent of its landslide problems have occurred.

WHITELY-BINDER: That has certainly arisen as a very prominent issue and one in which there is a very clear climate connection.

AHEARN: That's Lara Whitely-Binder. She's with the Climate Impacts Group at the University of Washington. Whitely-Binder says that while you can loosely tie individual rain events to mudslides, there's no way to prove that climate change is to blame for this year’s bout of landslides. Landslides are nothing new for the Northwest. BNSF Railway has documented 900 slides on their tracks in the past 100 years. But Whitely-Binder says in the future there could be more wet winters like this past one.

AHEARN: The Washington State Department of Transportation had 55 rail cancelations due to mudslides in 2012. Carol Lee Roalkvam heads environmental policy at WSDOT. In 2011 she co-authored an assessment of WSDOT's vulnerability to climate change.

ROALKVAM: We’re aware now of more upriver flooding than we’ve seen in the past, more extreme rain events - the sudden and intense rain that we’ve been experiencing more frequently - so a lot of the state routes are vulnerable to landslides today and the projections are that those will be worse.

AHEARN: But Roalkvam says she’s confident that WSDOT has strategies in place to respond to the infrastructure risks posed by climate change.

ROALKVAM: I don’t think anyone can design themselves away from every single risk but I think we have a lot going for us here.

AHEARN: Gus Melonas with BNSF agrees that there are a lot of near-term engineering solutions for the railway.

AHEARN: Melonas added that the railroad has spent “millions and millions of dollars” on rail upkeep, but he could not give a specific figure. The federal government has provided $16 million to fund landslide reinforcement at six sites along this problematic stretch of railroad. Meanwhile, passenger rail traffic is on the rise and if a proposed coal export terminal is built near Bellingham, rail use could jump as much as 50 percent above existing traffic levels here. I'm Ashley Ahearn in Seattle.

CURWOOD: Our story on the land sliding away in Washington State comes to us from the public media collaborative EarthFix.