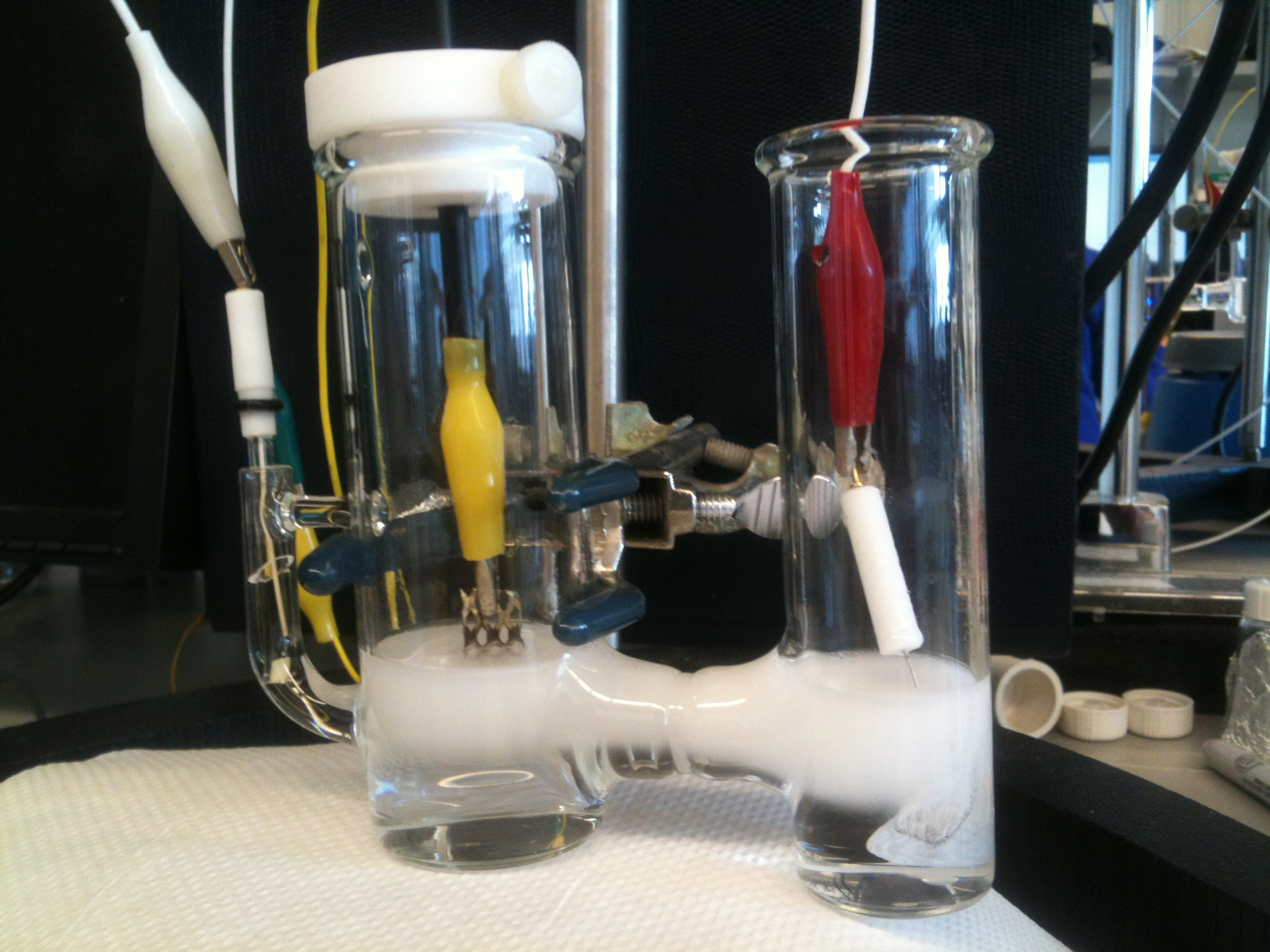 Electrochemical cell containing an electrode coated with an iron oxide catalyst film and a counter-electrode that produce oxygen and hydrogen fuel (photo: Curtis Berlinguette/University of Calgary)

The problem of storing energy from renewable sources is a great limitation of alternative energy technology. The solutions are either inefficient or unaffordable. Host Steve Curwood speaks with Curtis Berlinguette from the University of Calgary about his team's research into a more affordable and efficient mechanism to store renewable power.

CURWOOD: Batteries. They are a convenient but expensive way to store electricity. There is another path to storing electricity that physics has known about for centuries, also expensive and even less convenient. It’s called electrolysis and that happens when a current is passed through water, and separates H2O into its two elements of hydrogen and oxygen. The energy that was in the electricity is released when the hydrogen is burned or oxidized to make water again. Trouble is, this process needs very expensive catalysts to work. Well, now a team of Canadian scientists may have solved the problem of cost, and that could revolutionize the storage of renewable energy. Curtis Berlinguette, a professor of Chemistry at the University of Calgary, explains. 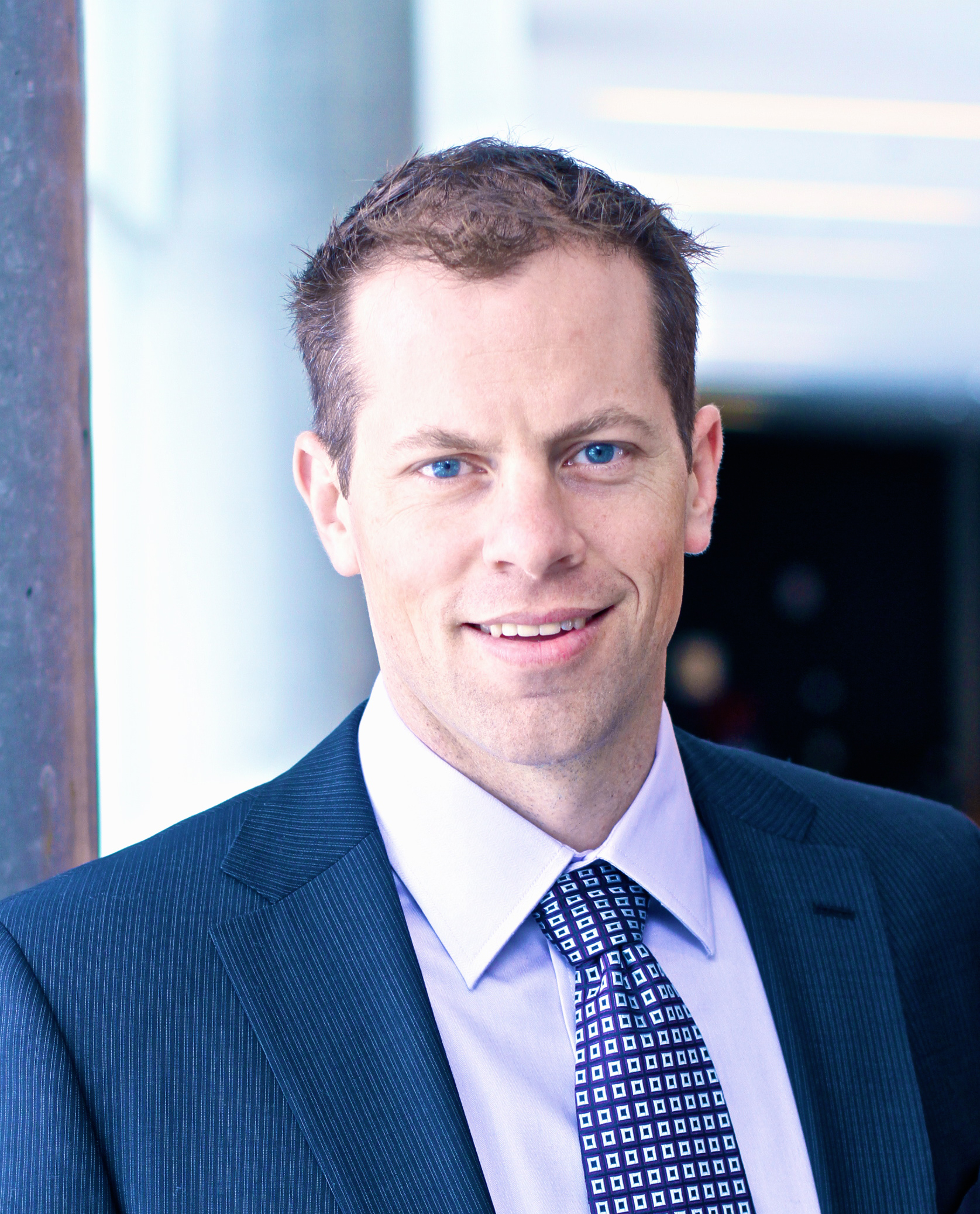 BERLINGUETTE: Well, the fundamental problem with electricity generated by renewable sources such as sunlight and wind, is the fact that there’s no real good way of storing that energy. If you think of a solar module that’s being installed on the roof of your home, and you go to work during the day when the sun is shining, well, that electricity that’s being generated is not doing you a lot of good. Same thing for wind turbines that are producing electricity at two o’clock in the morning when there’s no demand. So ideally what you want to do is have a storage mechanism that can store that electricity that can’t be used at that particular point in time. And then bring it back to the grid when there is high demand. And that’s the real opportunity with storage.

CURWOOD: And right now, what’s done is that people with solar power or wind turbines put it to the grid as they get it, whether or not the grid particularly wants it.

CURWOOD: So explain to us how you solved this energy storage problem.

BERLINGUETTE: So we’ve been working on catalysts to make a more efficient transformation of water into hydrogen fuels using that electricity provided by those wind turbines and solar modules. When you do produce that hydrogen, it can then be stored in a tank for as long as you want. And when you need that electricity back, you can convert that hydrogen, mix it with oxygen, and generate electricity that way. Or you can just plug that hydrogen into your furnace and heat your home directly with the hydrogen that’s been produced.

CURWOOD: Now, the big deal with these metal compounds that you’re using for your reactions, I gather is, their makeup. Can you explain to me what’s different from what people have done in the past?

CURWOOD: And amorphous is a fancy word for shapeless, all mixed up.

BERLINGUETTE: Exactly. So, if you think about a crystal material like lasagna, where you have an ordered layered structure, you throw that sauce on that lasagna, the sauce will only be able to interact with that top layer. Amorphous materials are much more randomly oriented, much like spaghetti noodles. And so, when you pour sauce on that spaghetti, it can better interact with all of the spaghetti noodles. And this is the real advantage of coming up with amorphous material. In our case, water can come in and interact with all those different metals and make a much more efficient process.

CURWOOD: So you found that having them all disordered really helps. And then, as I understand your paper, you found something else that needs to be done to make this more efficient. What’s that?

BERLINGUETTE: Our big breakthrough is that we’ve been able to introduce multiple different metals to these amorphous materials. If you think of cooking with a single spice, you get a nice tasty dish. But if you have the right combination of multiple different spices, you can make the dish a truly amazing experience. Our finding is that now we’re able to make in a reproducible way, mixed metal oxide films, and metals can then act cooperatively to better mediate this transformation of water into hydrogen fuels.

CURWOOD: What kind of metals are we talking about here?

BERLINGUETTE: We’re taking iron oxide, which is rust, and just doping it with cobalt and nickel. These are Earth abundant metals, and they’re much cheaper than what’s being used today. We find that they give us the efficiency that is comparable or better than the rare and expensive metals that are used, like iridium and ruthenium. If we’re able to match performance of ruthenium, which costs thousands times more than iron, then it’s certainly a big discovery for the field.

CURWOOD: Give me some numbers, Curtis, how much more efficient are these catalyzers compared to what people use today?

BERLINGUETTE: Well, the ones in our original paper just show comparable performance to metals that cost a thousand times more than materials that we’re using. But we have developed some catalysts in our labs that are about 20 percent more efficient than what’s being used today.

CURWOOD: We have a producer in our office who’s very proud of her solar array on her house. And she makes electricity – of course, she just gives it to the grid right now. With your technology, she’ll be able to store that at home and use it at will?

BERLINGUETTE: That’s right. So my utopian view here is for her home not to be connected to the grid in any way. So that way every home in suburban America and Canada, you never have to worry about tying them up to natural gas pipelines or electrical grids.

CURWOOD: So when shall we see these electrolyzers that use your process on the market?

BERLINGUETTE: Well, we’re currently in the testing phase with a large scale electrolyzer with a current player on the market. So these could be out there as early as 2014. The smaller scale units are projected to come out hopefully in 2015.

CURWOOD: Oh, and by the way, is there a name or a nickname for this process or the company that you’re forming?

BERLINGUETTE: We formed a company called Fire Water Fuel...coming to a home near you.

CURWOOD: [LAUGHS] So out of the laboratory and into business it sounds like, professor?

BERLINGUETTE: [LAUGHS] Yes, the reason I went into academia is to stay away from the real world, but here I am.

CURWOOD: Curtis Berlinguette is an Associate Professor of Chemistry at the University of Calgary. Thank you so much, professor.

University of Calgary Institute for Energy, Environment, and Economy website