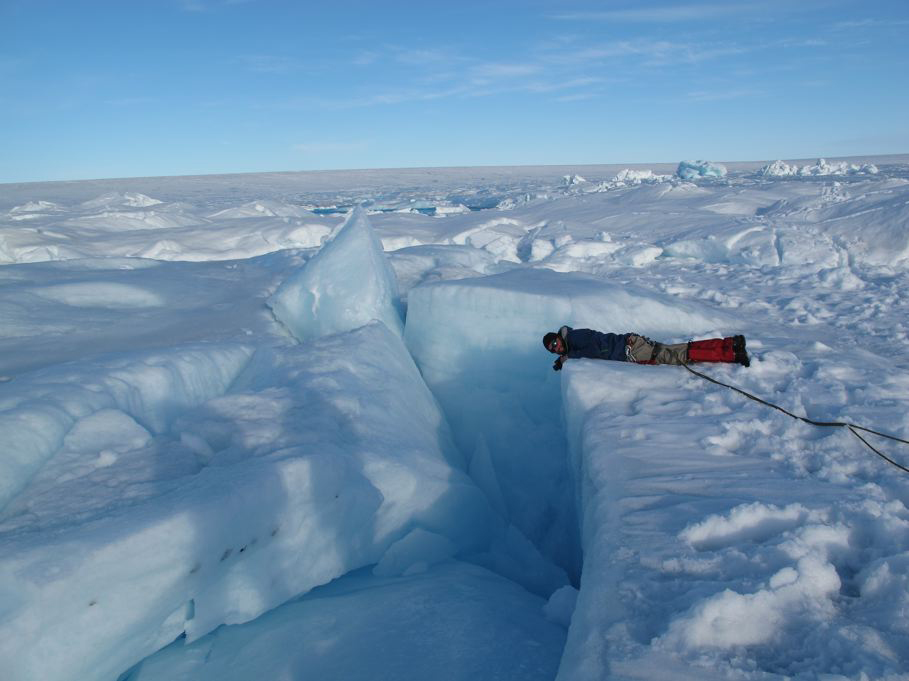 Marco Tedesco peers into a crack in the ice sheet (photo: Polar Seeds)

Greenland's 2012 summer ice melt was the largest on record. Ice specialist Marco Tedesco visits Greenland every year, and, tired of trying to convey the science of the melting ice with graphs and statistics, he found someone who could turn his data into music. Living on Earth’s Emmett FitzGerald has the story.

CURWOOD: Well, a team of scientists and artists at the City College of New York has come up with a way to listen to glaciers melting. It’s all part of a multimedia exhibit about Greenland’s melting ice sheet. To help people understand the science involved, they’ve included photography, video, and a musical method of reflecting the reality of the melting ice. Living on Earth’s Emmett FitzGerald has the story.

FITZGERALD: Every year, Marco Tedesco travels to Greenland to collect data on the annual melt of the ice sheet. He’s a snow and ice scientist, but he has another passion. 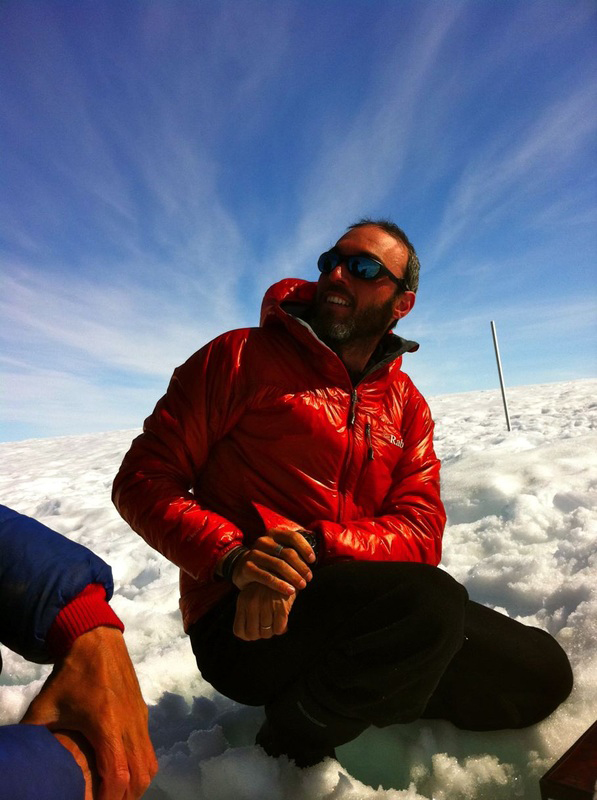 
TEDESCO: The thing I love more after science, or with science, besides my family, is really music.

FITZGERALD: So when Professor Tedesco found out about City Seeds, a grant program at the City College of New York that funds collaboration between professors from different fields, he saw a chance to combine those two interests. He went to the Music department looking for someone who could turn his data on Greenland’s melting ice into music.

PERL: I’d never done anything like this before at all. 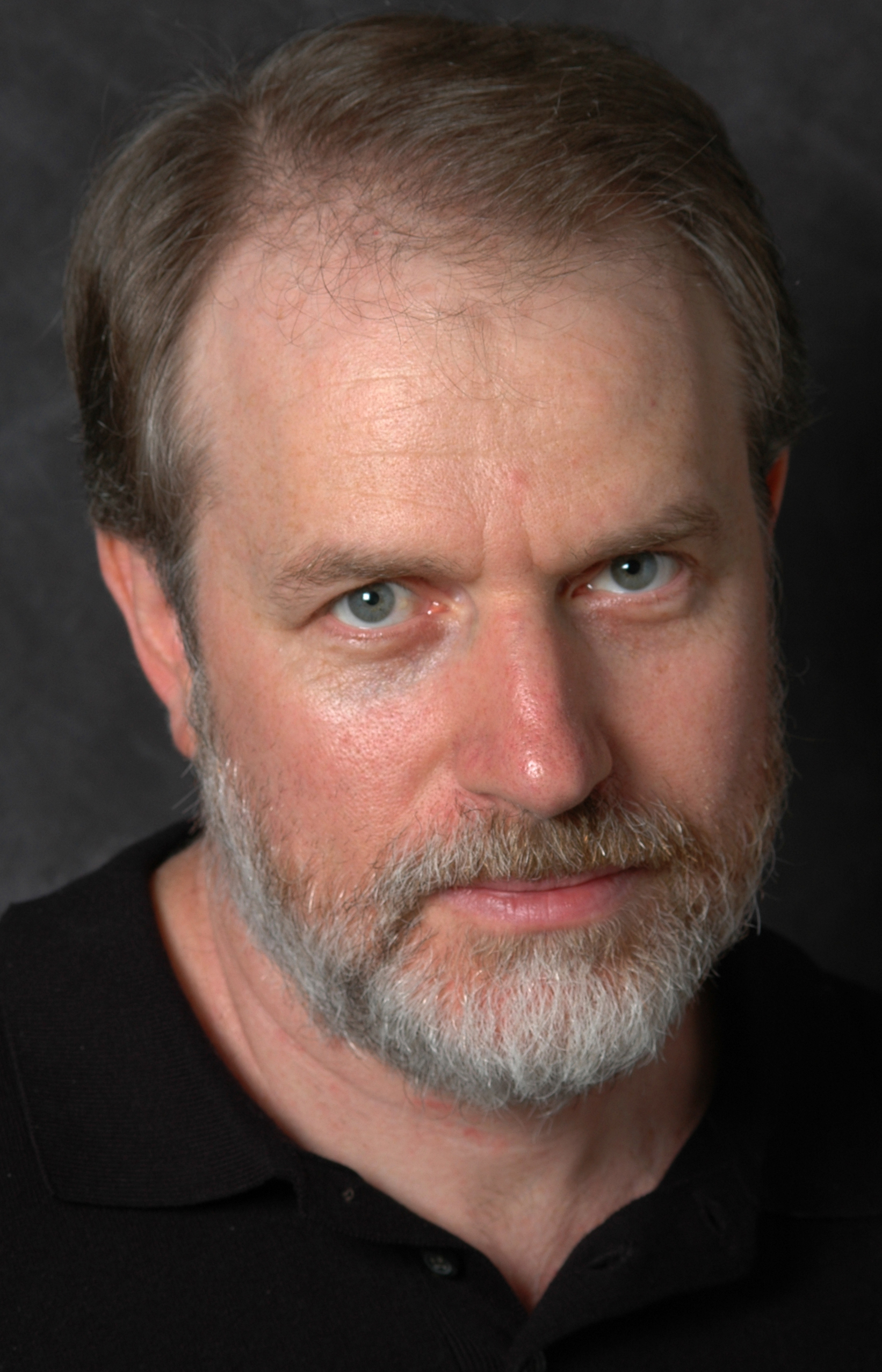 
FITZGERALD: That’s Jonathan Perl, a musicologist at CCNY. Although he had no experience sonifying scientific data, Professor Perl was up for the challenge. He did some research of his own.

PERL: I attended the international conference of auditory display and met people who were immersed in representing scientific data with sound.

FITZGERALD: Marco Tedesco says that when it comes to data on Greenland’s melting ice, one of the most important factors is albedo, that’s the capacity of a surface to reflect or absorb solar radiation. 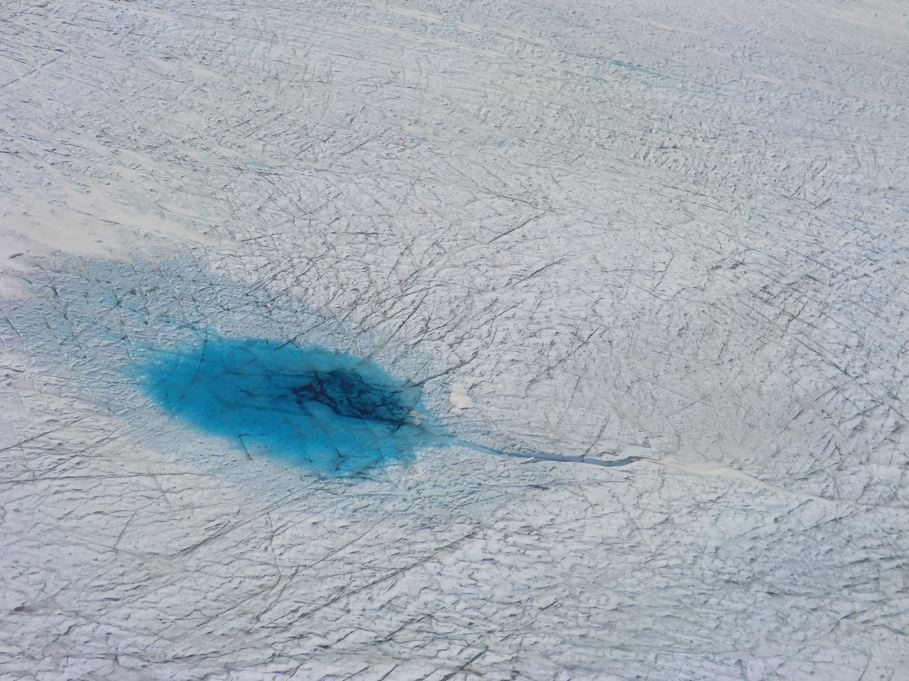 Exposed ice on the Greenland ice sheet. Darker ice surfaces cause the ice sheet to absorb even greater solar radiation. This is called the albedo effect. (photo: Polar Seeds)

TEDESCO: All of us we know albedo in a very empirical way. If you walk in the sun and you’re wearing a black shirt, you’ll get much warmer sooner than your buddy wearing a white shirt.

FITZGERALD: During summer in Greenland, the layer of fresh white snow on the surface begins to melt, exposing older, grayer snow, and eventually blue ice. As the island’s surface grows darker, it absorbs more solar radiation, increasing the overall melt. 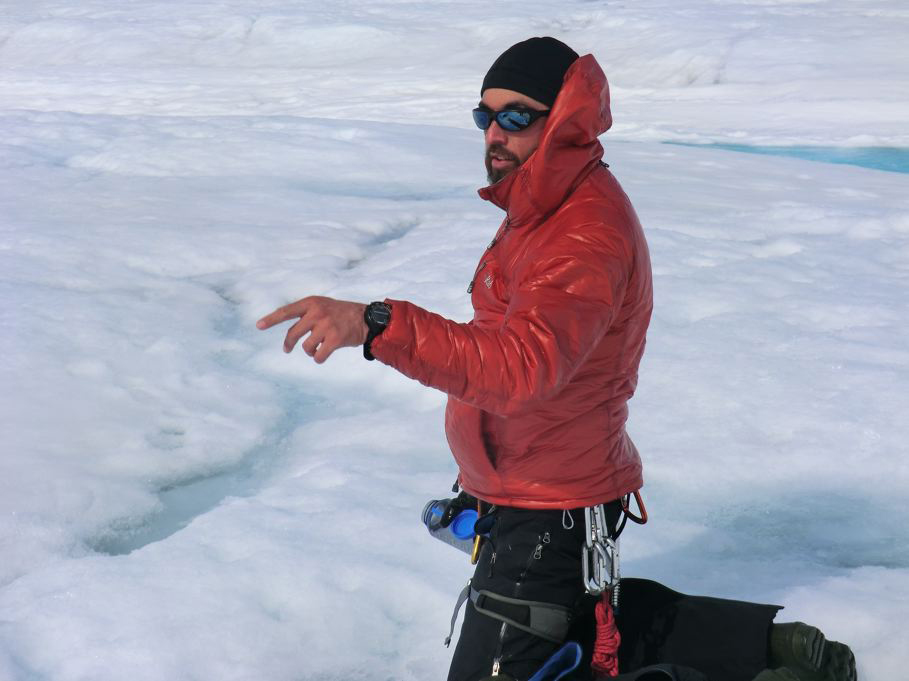 
TEDESCO: You can see this really as a Shakesperian tragedy. You have the temperature that is a major killer and is trying to kill Lady Greenland. By itself it’s not strong enough, but then you have Mr. Albedo that kicks in right, and then the two guys are accomplices.

PERL: The technique I used in sonification is called parameter mapping and it basically means representing some aspect of changes in the data with some changes in the sound. 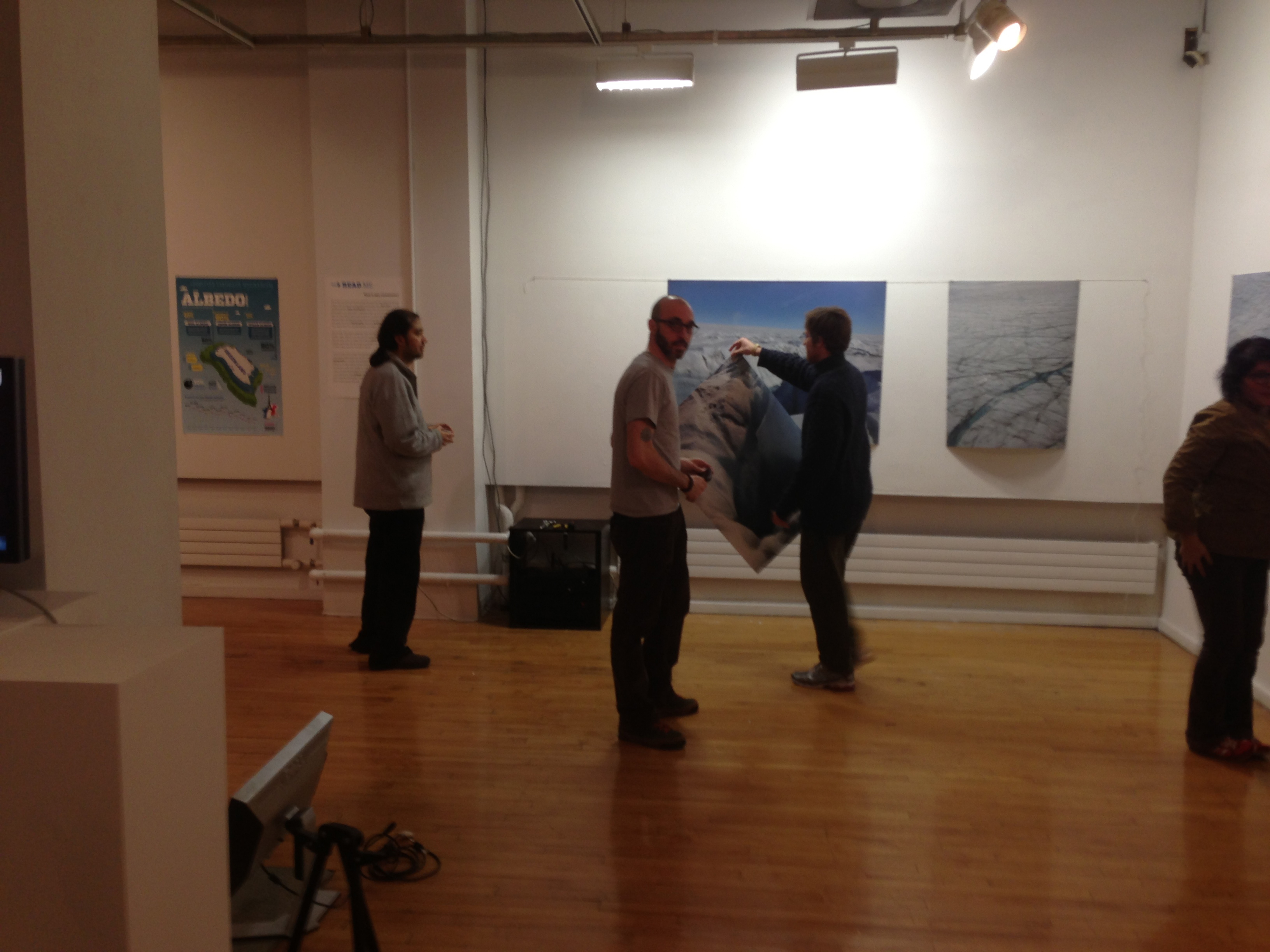 The Polar Seeds team setting up their exhibit at CCNY (photo: Jon Perl)


PERL: Albedo, I decided to represent that by increasing the intensity of the lower frequencies of a male bass choir. So that as the albedo worsens, as the ice gets darker and is unable to reflect the sunlight the lower voices become more and more intense relative to the high voices in this droning chord.

And the Geiger counter is a well known effect where these very annoying beeps and clicks get louder and more frequent and intense. I decided to use that effect to represent increasing amounts of the ice sheet melting over Greenland. 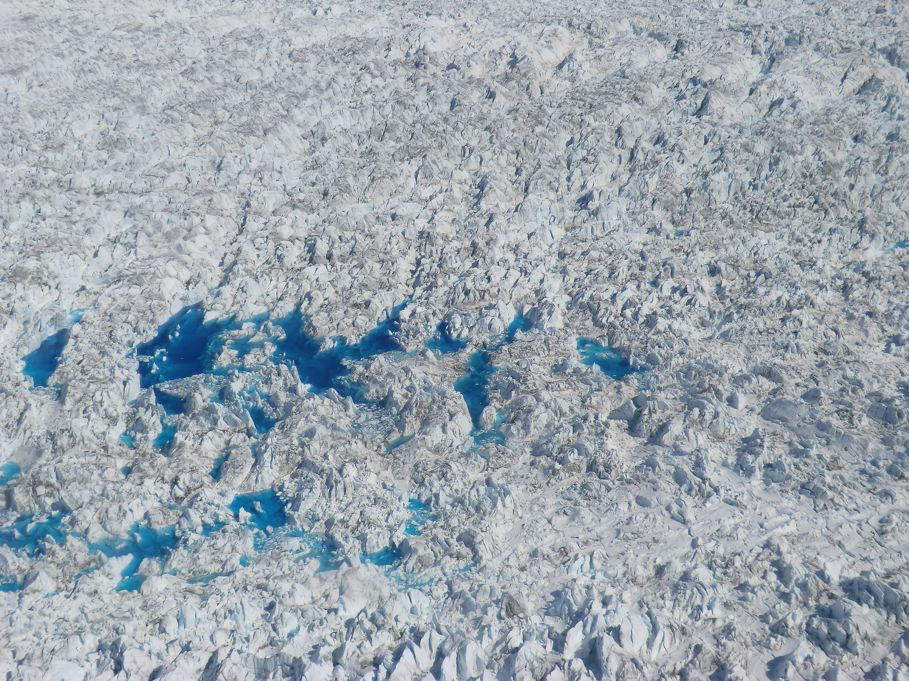 It’s a pretty serious problem that’s happening. And I thought more annoying would get the point home.

I think we must be getting into the 2000s now and you can hear the melting is increasing. It gets quite intense. 2012 is a mammoth year.

[MUSIC PEAKS IN INTENSITY AND STOPS]

FITZGERALD: There was record-braking melt in 2012. Professor Tedesco says it really stands out…

TEDESCO: like a giant basketball player, walking around Times Square.

PERL: I had a lot of fun with this one. It was pretty challenging to do technically but I figured out a way to compose music so that I could have a continuous performance with a lot of notes that are happening simultaneously. It’s very busy and very frenetic. I took the data, which is the amount of melting, and I have it actually controlling how many of these notes can sound at any given moment.

PERL: There was a spot with very minimal melting. That was the lowest amount of melting that happened in that time scale. So, essentially when the melting values are low it suppresses the playback of most of the notes. And then as the melting values rise in real time it allows more notes to be allowed basically through this gate, to be allowed to play.

PERL: The time scale we are hearing here is three seconds represent about a year’s worth of change. It’s not till the very end, which we are getting pretty close to, 2013, where you can pretty much hear the full musical score where all the notes are playing.

PERL: I’d actually done a prior version of this before I had the 2012 values, and the whole arrangement was kind of more intense, but as soon as I rescaled everything and added 2012, all the other years kind of paled in comparison.

FITZGERALD: Jon Perl has worked in all sorts of musical styles - from experimental jazz, to rock and roll. But he says he’s never heard anything quite like his glacial melt music. That may be because he had an unusual collaborator - the data.

PERL: I mean I know that I didn’t compose this piece entirely, its kind of composing itself by having the melting values determine what notes are playing at any given time and what notes aren’t.

FITZGERALD: In the end, the two professors presented the sonifications as part of an exhibit they called PolarSeeds. For Professor Tedesco, it was an exciting change of venue for his research.

TEDESCO: Usually my work finalizes in papers, publications, or conferences. So to be able to put together my results in an exhibit was very satisfying for me.

FITZGERALD: He hopes the songs, photos, and videos will reach a broader audience than a scientific paper, and thinks that could be a good thing. Greenland’s melting ice sheet is fast becoming a serious global problem. 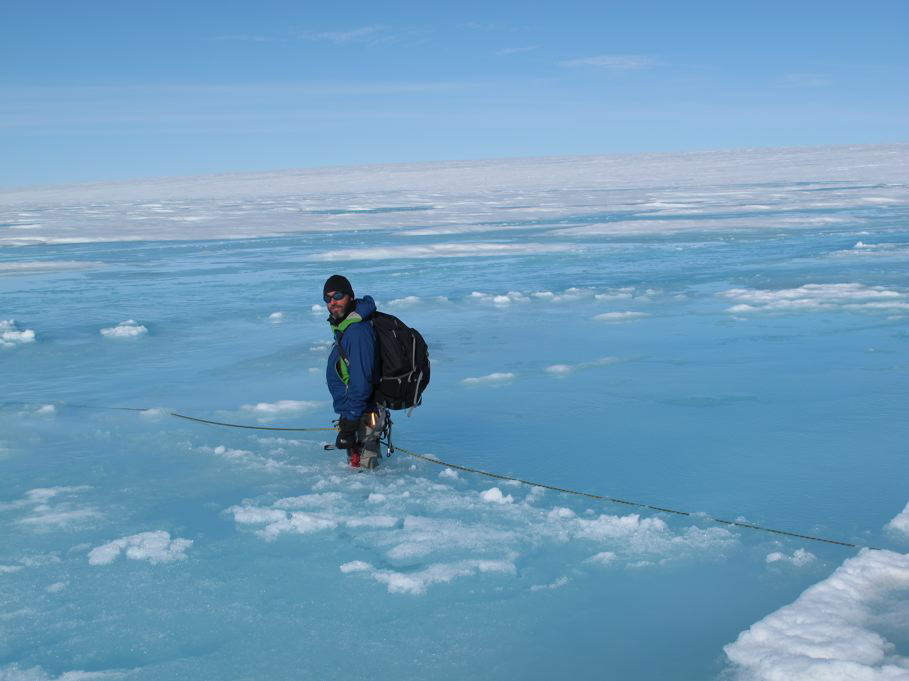 
FITZGERALD: Greenland’s contribution to sea level rise will affect people living near coasts all around the world. Professor Perl hopes the glacial melt music can affect how people think about global warming and its impacts.

PERL: When you take the time to actually listen to it, you experience what’s actually happening in a way that is more visceral, and has a different kind of impact then if you just look at a graph.

FITZGERALD: There are thousands of global warming graphs and statistics out there, but given what 2012 sounded like, hearing climate change may bring the message home.