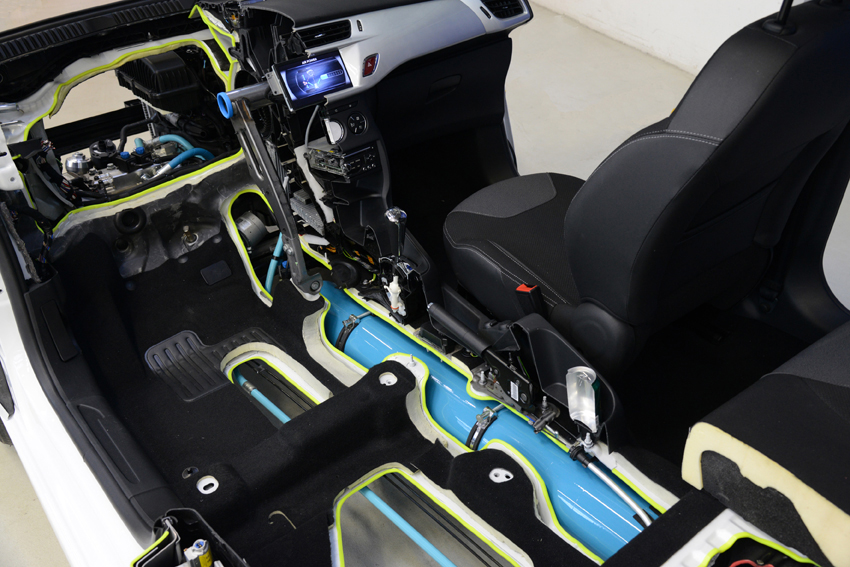 French car company Peugeot has created a new hybrid car that could be twice as efficient and half as pricy as traditional battery hybrids. The secret? It runs on compressed air. Peugeot engineer Karim Mokaddem talks about the technology with host Steve Curwood.

CURWOOD: It's Living On Earth, I'm Steve Curwood. We’ve seen solar cars, cars that run on vegetable oil, and now the French car company Peugeot is tapping into another abundant substance. They’ve come out with a car that runs on air. Not all the time, of course. It’s called the Peugeot Hybrid Air, and it recently debuted at the Geneva auto-show. Karim Mokaddem is an engineer with Peugeot who works on the project. He joins us now from their offices outside of Paris. Welcome to Living on Earth.

CURWOOD: So a car that runs on air? How does that work?

MOKADDEM: OK. It may seem surprising. But it is a reality. So how does it work...the idea is that when you are driving your car in town, you need to decelerate, you need to brake. You do this in a normal car, while losing kinetic energy of the car. And what we are doing with our hybrid air technology is as soon as you’re just braking or just decelerating, you are able to store the energy very quickly. Compressed air, which is a new way of looking at energy storage in a hybrid car.

CURWOOD: What does this compressed air engine look like?

MOKADDEM: What you have is a sort of scuba tank that you have in the car. And in this scuba tank, what you’re going to do is store in the compressed air the energy that is normally lost when you are braking or accelerating. In electrical cars, you’re going to store the energy in batteries, and what we are doing in a hybrid air car, is storing quickly, recovering quickly, storing quickly, recovering quickly. It’s completely a different mindset. We’re able to use this energy very rapidly and very frequently. It allows us to have a drastic fuel consumption reduction in urban situations of 45 percent which is a really, really good figure. 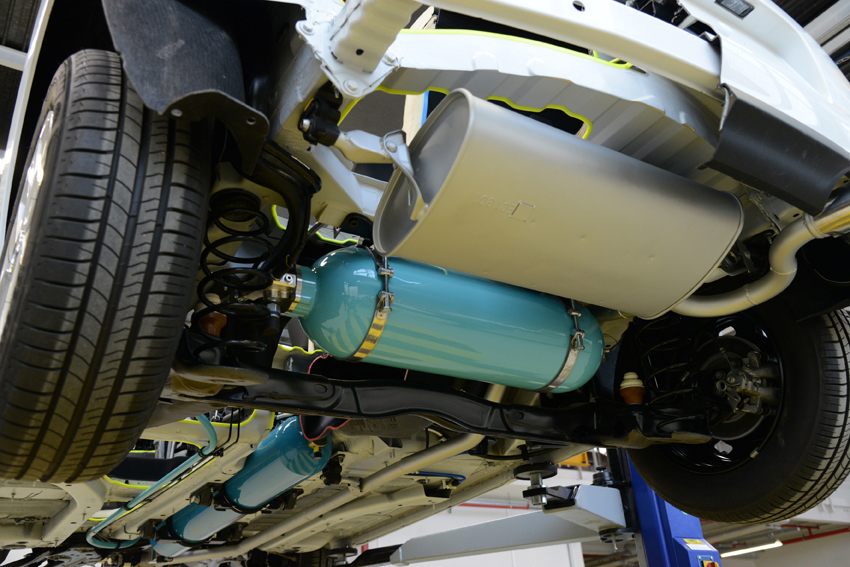 CURWOOD: So this car is designed for the city rather than the highway, I gather. The mileage isn’t so great on the highway where you don’t have to brak very often.

MOKADDEM: Yes, exactly. That is the point. The potential of this technology is really great in urban situations. When you’re riding your car in the motorway, what will happen is that you’ll use what we call gasoline mode. In this mode, the internal combustion engine will act exactly as in a normal car. And you will drive the car exactly the same way you drive a normal car with a gasoline engine. 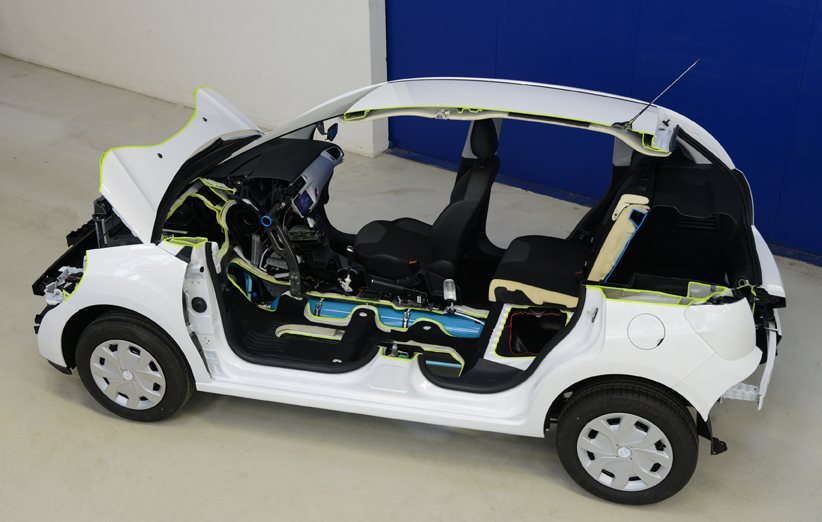 CURWOOD: How many miles to the gallon are we talking about here?

MOKADDEM: We are able to achieve up to 80 miles per gallon. It’s a real good result because it’s something that is not reached today by any other hybrid technology for this kind of segment.

CURWOOD: How fast can it go?

MOKADDEM: How fast? OK. There’s no... Exactly the same as normal car. So you can on the European motorway, drive up to 130 kilometers per hour without any troubles, and of course, you can go much more higher if you want, but it’s not allowed here.

CURWOOD: [LAUGHS] Alright. Well. What does it sound like when you’re using the compressed air?

CURWOOD: So it’s not so quiet. It’s sort of loud. Is it a whooshing noise? Or is it a grinding noise?

CURWOOD: I’m game. Bring one of these forward. I’ll drive it right now.

MOKADDEM: [LAUGHS] This is something we can manage.

CURWOOD: So some people complain that building traditional hybrids, Toyota Prius comes to mind, is not all that environmentally friendly. How would the hybrid air compare in that department?

MOKADDEM: Yes, this is a good point. The parts we are using in this technology are fully recyclable. This is a very important point which you cannot today achieve with batteries and electrical parts, which means it is much more ecologically friendly than other technologies.

CURWOOD: So some people complain building traditional hybrids, Toyota Prius comes to mind, is not all that environmentally friendly. How would the hybrid air compare in that department?

MOKADDEM: Yes, this is a good point. The parts we are using in this technology are fully recyclable. This is a very important point which you cannot today achieve with batteries and electrical parts, which means it is much more ecological friendly than other technologies.

CURWOOD: Talk to me as to how much this will cost. You can tell me in Euros. 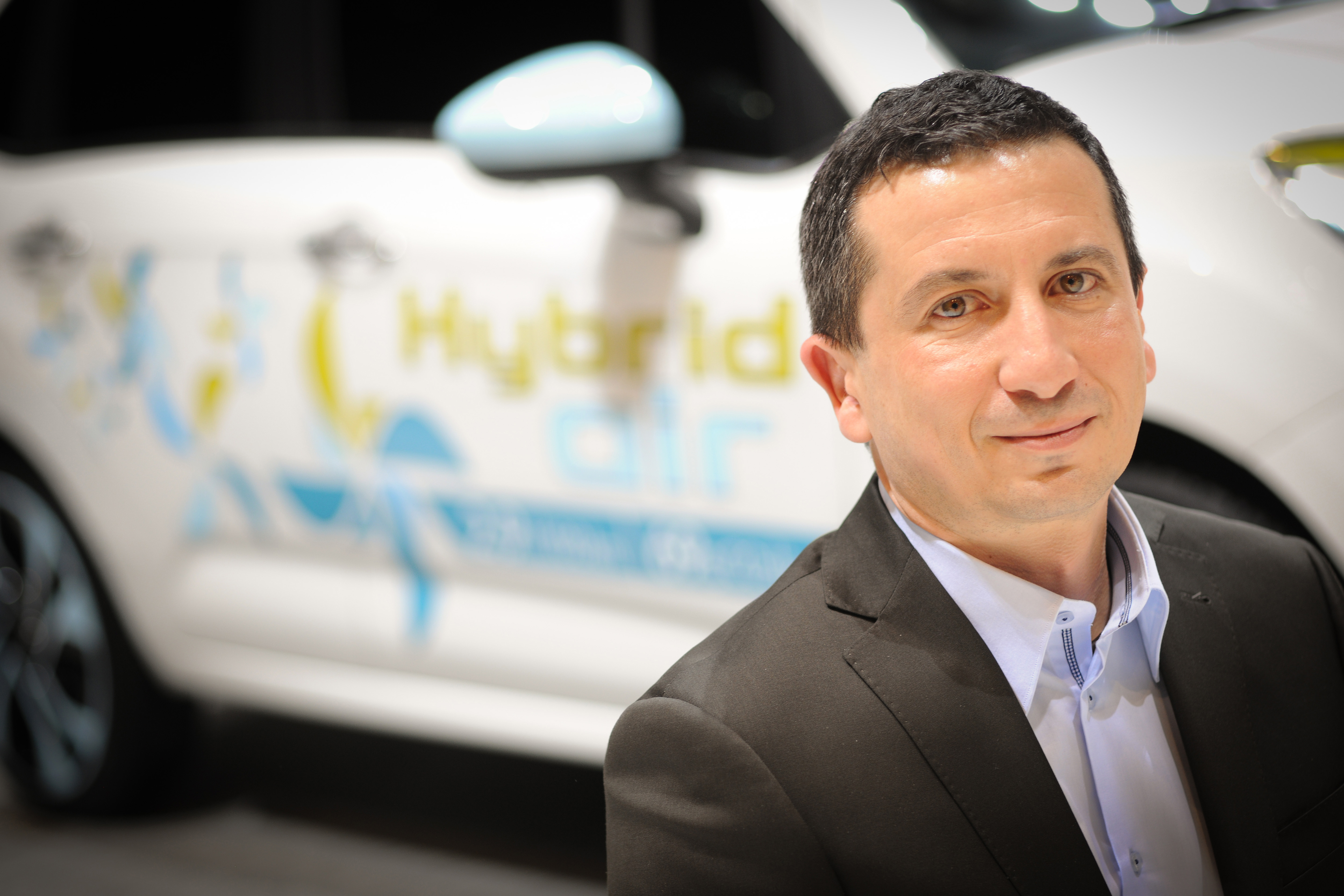 CURWOOD: Half the cost?

CURWOOD: That’s impressive. Now, what do you think the future holds for this technology?

MOKADDEM: The first point is that we will have to meet in the next years, the 2020 regulations in terms of CO2 and there is a real need to have new technology that will be able to fulfill these challenges. The second point is that today we don’t think that only one technology or a few technologies will be able to make it. So, for me, this new way of looking at hybridization is probably a promising way to say, “how can we address this growing market with very simple and robust technologies that can be affordable to all of us?”

CURWOOD: And of course, this is not a new technology at all, compressed air has been around as long as...

CURWOOD: Karim Mokaddem is an Engineer at Peugot. Thank you so much for joining us.

MOKADDEM: Thank you very much. And thank you for your interest in our technology.