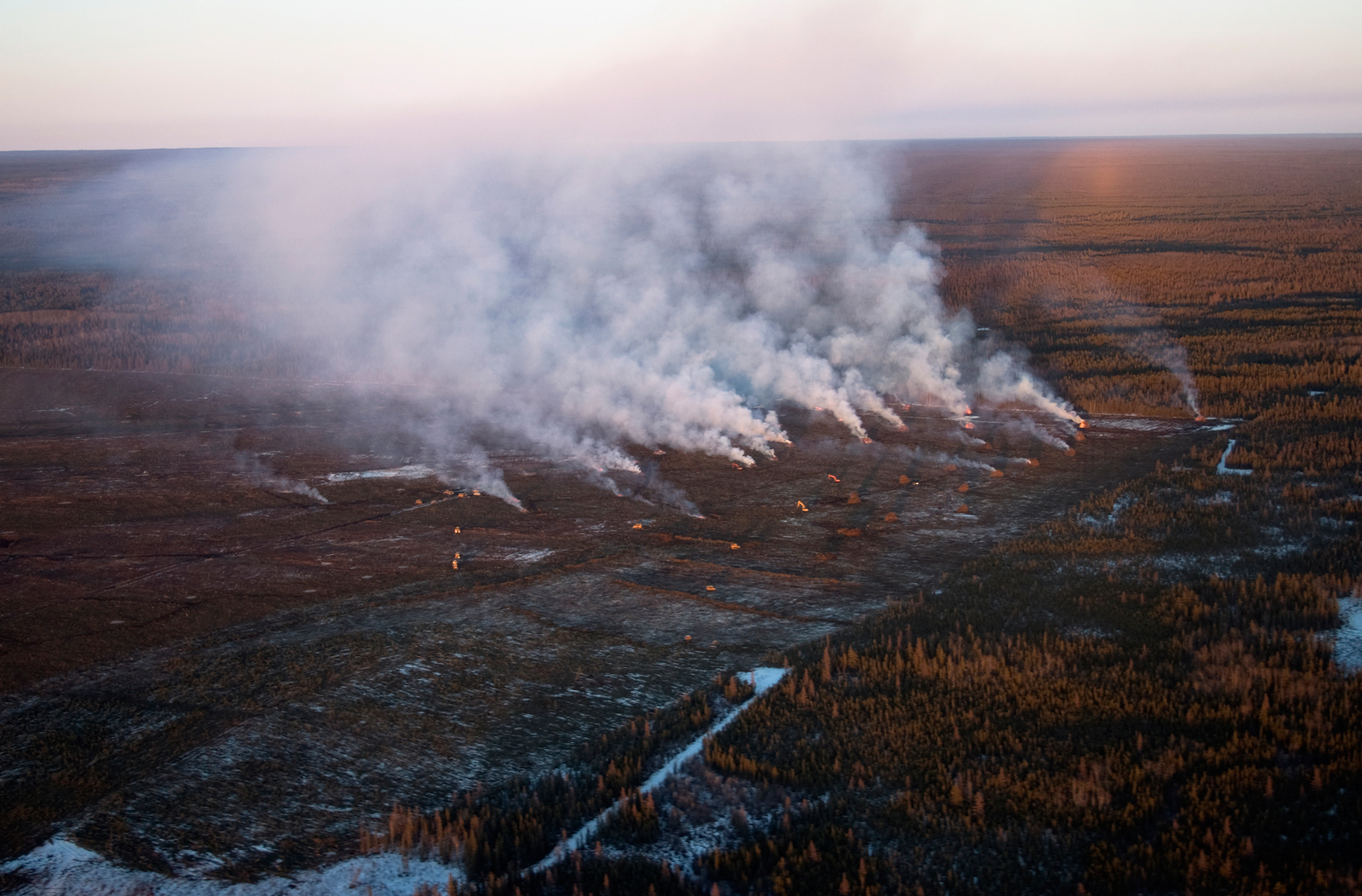 CURWOOD: Canada’s conservative government, which has been pressing the Obama Administration to approve the Keystone XL pipeline, has come under sharp criticism for allegedly muzzling Canadian government scientists who talk about the pipeline, climate change and other controversial topics. The Environmental Law Centre at the University of Victoria released a report called “Muzzling Civil Servants: A Threat to Democracy" that documents the ways in which Prime Minister Stephen Harper’s administration has prevented public scientists from speaking freely about their research. The Law Centre and Democracy Watch, a leading Canadian public accountability group, have requested an official inquiry into whether these practices violate Canada’s Open Government laws. Tyler Sommers is the Coordinator for Democracy Watch, and he joins us now. Welcome to Living on Earth.

CURWOOD: So what was the process for talking to government scientists before Prime Minister Harper took office, and what's it like now?

SOMMERS: Well, it was a much more relaxed situation. Journalists and sometimes even the general public were able to call and speak to scientists about their scientific research without much oversight of these conversations. But what we’ve moved toward now is a situation when journalists call to speak to scientists, the scientists need to speak to their supervisors, speak through communications officers, or even to the minister’s office to get approval to speak to these journalists about their scientific research. And sometimes this can be so specific as to require them to get approval of the very lines that they’re going to send to a journalist in response to whatever questions they have.

CURWOOD: Now what are the topics you found are being most muzzled?

SOMMERS: The topics where they’re seems to be more protection are the politically sensitive ones. So things like climate change, like salmon fisheries, resource extraction. But these aren’t communications policies that apply to all federal government scientists that were able to find in those departments. So there was a joint NASA and National Research Council study into snowfall patterns. So the journalist called NASA and was able to speak to a scientist and completely get through an entire process of reaching them, having a talk and hanging up within 15 minutes. They called our end to speak to the Canadian side of things, to find out what was going on, to find out what Canada’s involvement was, what the purpose was and what they found. It wasn’t really a politically sensitive topic. But because of the lengthy delay, they didn’t get back to the journalist until a day after the deadline, he decided he would file an access to information request and see what was going on. And they found 11 public servants with over 50 emails discussing the various points about his request. And one point that’s particularly troubling is the fact that they were discussing tone. Because what implies was that if the tone is positive, so if he was going to write something good about the government, or good about the department, they would be more likely to let him speak to a scientist. Or if the tone was negative, they would be less likely. And that’s particularly troubling because it at least implies that the government is trying to shape the information that federal government scientists release.

CURWOOD: So there are a number of cases that are cited in the Environmental Law Centre’s study. Could you talk about another one that’s particularly egregious?

SOMMERS: Sure, another example of the muzzling we uncovered...scientists who were attending the International Polar Year 2012 conference in Montreal - so this a conference that brings together scientists from all over Montreal - they were told when approached by a journalist that they should ask them for their business card and tell them that you would get back to them with a time for an interview. And then what they were to do was to speak to their media relations people in their department who would schedule and attend any interviews that these scientists went to. They also had media relations people follow these scientists at the conference in order to monitor what they were saying to journalists and record any conversations that they had.

CURWOOD: So in so far as you can tell, what do you think the government’s motive is in doing this?

SOMMERS: The government’s motive, as far as well can tell, is that they want to limit as much as possible any negative press. This is a government that ran on open government, that ran on cleaning up and making our country more democratic. And now we find that they’re limiting the information that Canadians pay for. So the reason we believe they’re doing is...they’re just trying to ensure that nothing that scientists release is counter to the government message.

CURWOOD: Now, your organization Democracy Watch and the authors from the Environmental Law Centre have written to Canada’s Information Commissioner - I believe her name is Suzanne Legault - asking her to investigate these policies. What do you expect will come out it?

SOMMERS: What we’re hoping will come out it is that she’ll launch a full investigation, and she’ll see whether this is a systemic issue or whether it’s isolated to mostly the cases that we found. But one thing that the Information Commissioner has said was, in contrast to some of the government lines that they’re the most open in Canadian history that they are far from that. And that providing information to the public isn’t increasing - it’s actually declining. And the amount of time that it’s taking for the public to get information is also increasing. And that’s one thing that we must consider and we must keep our eye on - is the fact that delay is a very useful tactic. If politicians are able to put off a story coming out, or information coming out until after the media has moved on and they’ve found something else to focus on, they may be able to avoid accountability and avoid responsibility by and large for whatever actions they have taken.

CURWOOD: I understand that some scientists have actually been holding demonstrations at Ottawa in front of Parliament on this issue?

SOMMERS: Yes, there have been a number of scientists that have come together in different ways. There was a Death of Science rally recently in Ottawa and on Parliament Hill, but the response from the science community has been the same. They said that the government and Canadians have somehow come to accept an iron curtain around scientific research is happening.

CURWOOD: Tyler Sommers is the Coordinator for Democracy Watch. Thank you so much for taking this time.

SOMMERS: Thank you for having me.

CURWOOD: We asked the Canadian government for comment, a statement from the Honorable Gary Goodyear, Minister of State (Science and Technology) is posted in full on our website LOE.org. It reads, in part: "The number of peer-reviewed articles, research reports and datasets that are made available by federal scientists each year stand as clear evidence of our government’s commitment to the scientific enterprise."

As discussed, please find below a statement from the Honorable Gary Goodyear, Minister of State (Science and Technologie) on the Environmental Law Centre at the University of Victoria's report called Muzzling Civil Servants:

It is important to keep in mind the sheer breadth and depth of federal scientists’ current activities. Our government employs and supports scientists and researchers in countless capacities.

In 2011-12, more than 20,000 scientific and professional personnel worked for the federal government, including nearly 7,000 engaged in research and development.

Their work encompasses a number of disciplines and fields, such as protecting us against unsafe products; working to better understand our environment including our bodies of water; helping us manage our natural resources responsibly; pushing the boundaries of human knowledge; and challenging our conventional understanding of nature and the very functioning of the universe.

The number of peer-reviewed articles, research reports and data sets that are made available by federal scientists each year stand as clear evidence of our government’s commitment to the scientific enterprise.

In all of this work, government scientists continue to engage Canadians regularly. Last year, Environment Canada participated in more than 1,300 media interviews and statistics showed that its scientists published 524 peer-reviewed journal articles in 2010. In the same year, Agriculture and Agri-Food Canada issued more than 968 scientific publications while Natural Resources Canada published 487. These are just a few examples of the numerous departments and agencies that actively share their research.

We value and support the work our scientists do each day and rely on the critical knowledge they produce to inform public policy and meet the needs of Canadians. The numbers show that not only does this government stand behind its scientists; we are making more of the data they generate available to Canadians than ever before. In our Canadian system, Ministers are the primary spokespersons for government departments.