The Fight to Save Old Logger’s Path 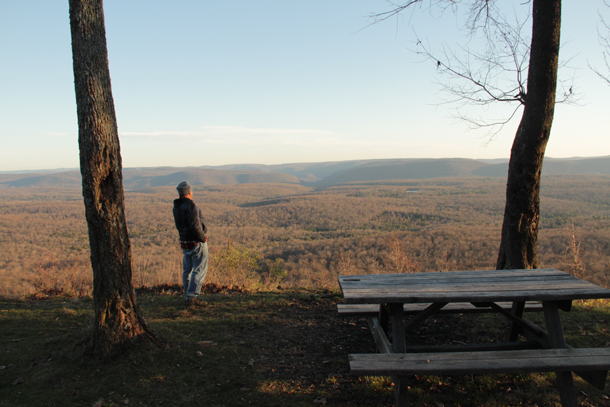 Pennsylvania is a central location of the fracking industry, and some environmentalists hoping to protect an area of natural beauty have found a mystery over its status. Reid Frazier reports.

CURWOOD: And now a forest mystery. In Pennsylvania, the arrival of white pickup trucks is often the first sign that hydraulic fracturing will take place nearby. When these trucks showed up near one of the state’s best hiking trails, environmental activists and outdoor enthusiasts wanted to find out what was going on. But answers have been hard to come by from the state agency that runs the forest. As the Allegheny Front's Reid Frazier found, shedding light on what the state is planning there has been a bit like solving a whodunnit.
FRAZIER: Ralph Kisberg stands on a boulder, looking down into a series of potholes at the bottom of a crystal clear stream.

KISBERG: I guess the theory is a rock gets in there and gets swirled around, for hundreds or thousands or tens of thousands of years wears away a nice little hole in there – gets trapped. 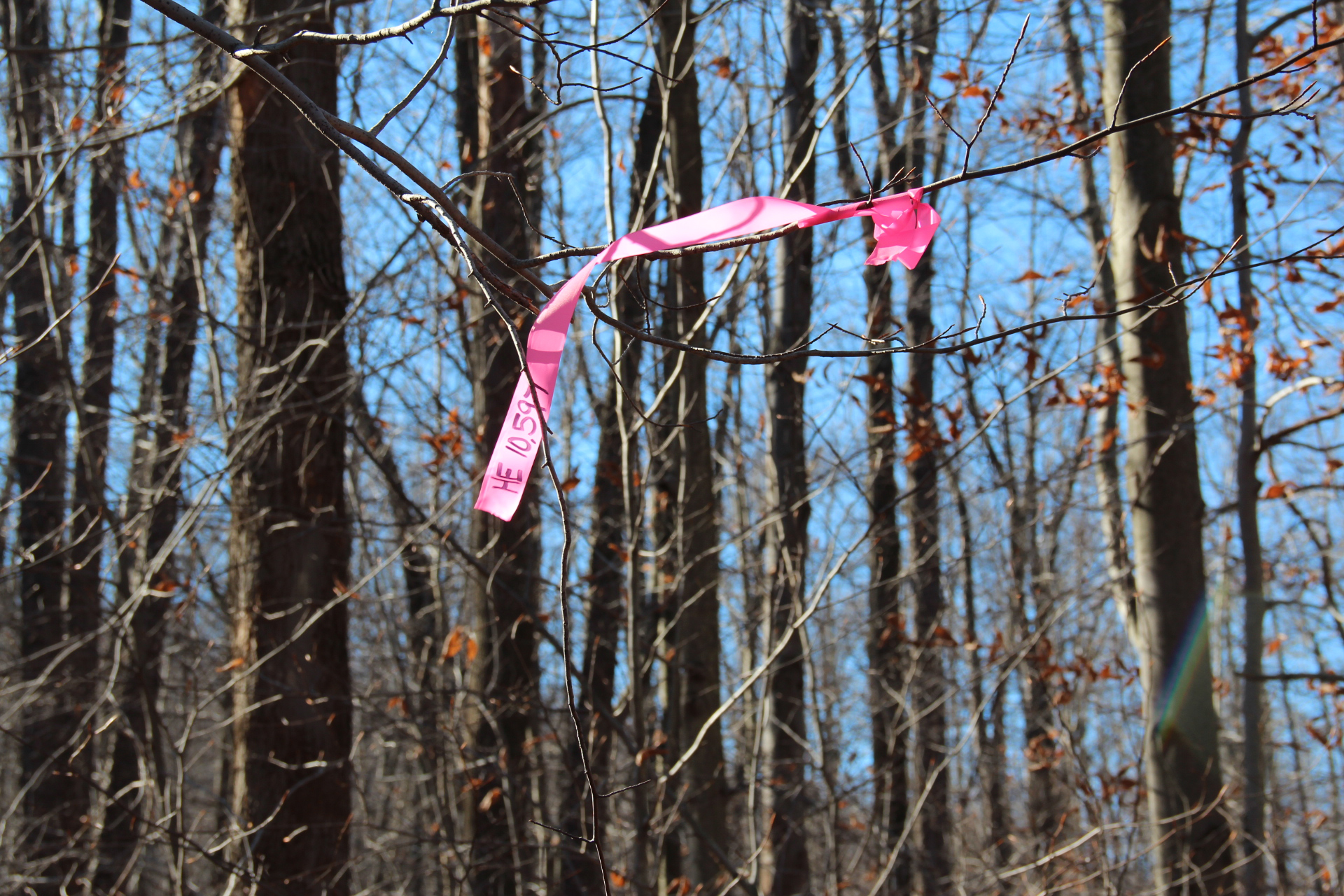 Flagging like this could mean natural gas development along the Old Loggers Path. Activists say the state could keep drillers out of the trail, if it wanted to. (Photo: Reid R. Frazier)

FRAZIER: This is Rock Run. It drains the western edge of a part of the Loyalsock State Forest called the Old Loggers Path. The path is a 27-mile loop that straddles several small mountains in the middle of Pennsylvania, and it's a favorite of backpackers and hikers. Up on the Old Logger’s Path, Kisberg has to keep a lookout so as not get lost.

KISBERG: The only problem is you got to really pay attention because this path is hard to find and hard to follow.

FRAZIER: Kisberg is head of the Responsible Drilling Alliance, an environmental group focused on natural gas development. This part of Pennsylvania, north of Williamsport, is one of the hottest drilling areas in the state – if not the country. But there’s no drilling here right now. As recently as 2008 the state touted the forest as as an area of exceptional value and beauty. Because of this, Kisberg thought the Old Logger’s Path and Rock Run would be spared from drilling. But his outlook changed not too long ago.

KISBERG: Well it was last summer, and it was someone calling me to say, what’s going on in Rock Run? There's...the frackers are up there. They’re all over the place!

FRAZIER: White trucks were running up and down the small forest roads above Rock Run. Kisberg, who lives in nearby Williamsport, went up to the forest. He realized the trucks were there to conduct seismic testing. This is like getting an X-ray to see how much gas is under ground. And it’s a first step before drilling can take place. The Department of Conservation and Natural Resources, or DCNR, is the state agency that runs the forest. The DCNR said little about what was going on in Rock Run. Kisberg wanted to find out more. So he came here.

FRAZIER: This is the Lycoming County courthouse. Kisberg learned that a man named Clarence Moore once owned the mineral rights to the Old Loggers’ Path. So with the help of a lawyer, he looked up the name.

KISBERG: Clarence Moore? Not coming up.

FRAZIER: It took a while but eventually they found documents like this one.

FRAZIER: It was a sale of mineral rights to Anadarko, a big energy company. Mark Szybist is an attorney for the environmental group Penn Future. He helped Kisberg research the records.

SZYBIST: We discovered that Anadarko now owns half of the oil and gas rights under the Clarence Moore tracts.

FRAZIER: That explained the seismic testing. Anadarko has drilled dozens of deep shale wells on state forest lands. But the research turned up something else.

GREEVY: This particular land that we’re talking about, back in the day was owned by the Central Pennsylvania Lumber company.

FRAZIER: Les Greevy is an oil and gas attorney in Williamsport. Greevy says that during the Depression, the company sold the land to the state, but it kept the mineral rights. Normally, this means the company would have an unbridled right to come onto the land to drill or mine for coal. But in this case, the land was essentially put on a timer. The company would have 50 years to extract the minerals. After that, the rights of surface access for 18,000 acres of state forest – a little bit bigger than the size of Manhattan – went back to the state.

FRAZIER: Eventually, Clarence Moore bought the mineral rights to the land. And after the 50 year period expired, Moore tried to regain surface access. But in 1989, a court rebuffed him. It said the DCNR could keep drillers off the land if it wanted to. But that isn't how the agency sees it now. Chris Novak is the DCNR’s press secretary.

NOVAK: As the law applies, DCNR can’t prohibit access to subsurface mineral rights if we don’t own them.

FRAZIER: Other DCNR officials have said Anadarko and other companies could sue the agency if it tries to keep the company off the Old Loggers’ Path. Novak and the DCNR remain tight-lipped about the agency’s discussions with Anadarko. But Kisberg and others grew alarmed last year when survey markers for what looked like well pad sites began showing up in the forest. And records obtained by the Responsible Drilling Alliance through right to know requests raised alarms even more. They revealed Anadarko has been talking with the state about a development plan for the forest for much of the past year. The details of those plans, however, remain unclear. An Anadarko spokeswoman would only say that no development plans had been approved. These cagey answers from the state bug Mark Szybist, the Penn Future attorney.

SZYBIST: It’s not right for DCNR to be making these decisions on its own without any public review of the documents. You know, if DCNR is so confident that it’s going to make the right decision, then why not let the public look over its shoulder a little bit, and have a seat at the table?

FRAZIER: The DCNR counters that the state simply doesn’t do public reviews of drilling plans on public land. The debate is only heightened because the state has already leased 700,000 acres of forest land – that’s a third of the entire state forest system. That means that places like the Old Loggers’ Path are becoming increasingly rare, says Paul Zeph, of the Audubon Society.

ZEPH: This is one of the places in the state that should be off limits.

FRAZIER: Zeph says this in spite of the fact that the Old Loggers’ Path has been mined and timbered in the past. But the forest is unique because numerous springs and seeps keep it wet. That’s good for bugs, and the bugs are good food for migratory songbirds who nest there. Plus the forest is quiet, and the birds like that. No matter how careful DCNR and Anadarko plan the development, drilling is loud and disruptive. And Zeph says, it would chase away some of these birds.

ZEPH: ...and there’s nowhere else in Pennsylvania for them to go.

FRAZIER: For now the fate of this trail lies in the state capital of Harrisburg. Whatever happens there, it won’t be a mystery for very long.

For Living on Earth, I’m Reid Frazier, in Williamsport, Pennsylvania.

CURWOOD: Our story on the Old Loggers' Trail comes to us by way of Pennsylvania’s public radio program, The Allegheny Front.

More about the Allegheny Front